Must Share News – Independent News For Singaporeans
Home News Train Service Between Joo Koon And Gul Circle To Be Suspended Until...

As a result of the Joo Koon train collision on Wednesday (15 Nov), Transport Minister Khaw Boon Wan has ordered for the separation of the two sections of the East West Line — both of which were operating under different signalling systems.

This means that train services between Joo Koon and Tuas Link MRT Stations will not be available to members of the public — until Monday (20 Nov) that is. 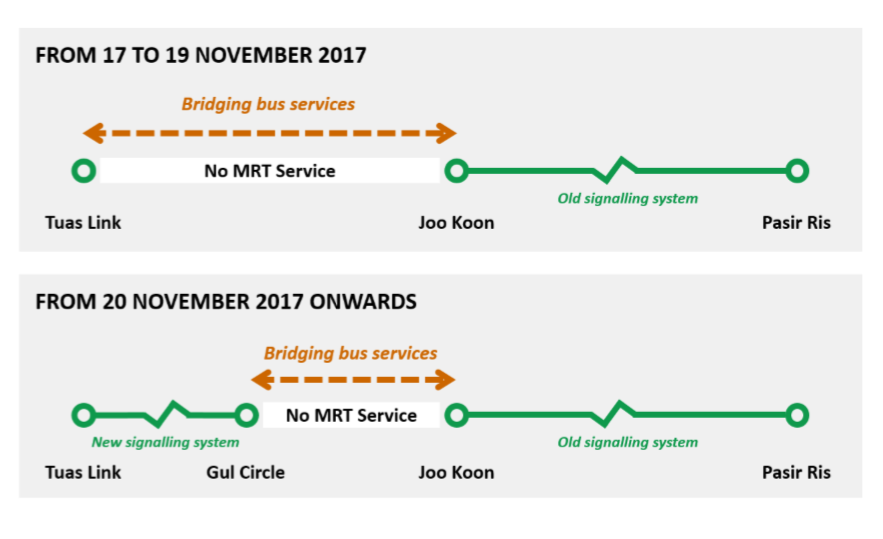 Additionally, train services between Joo Koon and Gul Circle will not resume for up to a month in order for checks on the signalling system to be carried out.

But don’t worry if you happen to work in the area, LTA has deployed bridging buses in place of the MRT.

Temporary closure due to collision

Speaking to the media on Thursday (16 Nov), Mr Khaw expressed his concerns about the circumstances that led to the collision.

Until [the circumstance leading to the collision]  is fully addressed, we should not resume the link between Tuas West Extension and the rest of the East West Line.

And close off the links they did, because on the very same day, LTA gave the following update on their Facebook page.

And don’t worry about paying extra when getting off at Joo Koon to head to Gul Circle either.

Because from Monday onwards, those who break up their journeys by taking the bridging buses from the two stations won’t be charged for an additional trip when they rejoin the MRT line.

The collision – which resulted in a total of 36 injured – was a result of a software glitch when the faulty train was “transiting between the old and new signalling systems”.

LTA had released a statement explaining the situation.

Furthermore, SMRT held an impromptu press conference on the day of the incident explaining how the faulty signalling circuit led to the trains coming into contact.

Subsequently, Mr Khaw himself issued an apology for the “awful day” which inconvenienced – and even injured – commuters.

There, our beloved Transport Minister stated that he was equally as upset as the public were.

In the meanwhile, LTA and SMRT will continue investigating the incident together with signalling contractor, Thales.

Your thoughts on the closure

Are you affected by this closure? Are the bridging buses a sign of SMRT going above and beyond?

Then again, the Tuas West Extension was only opened earlier in June this year. So it’s not like those already working at the area aren’t aware of the alternative methods of travel.

What do you think of this whole fiasco? Let us know in the comments below.