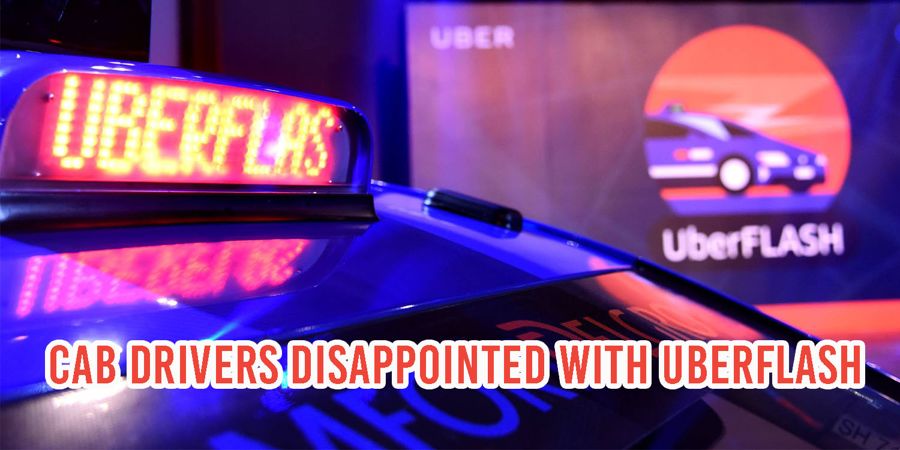 After all the stories on how Uber drivers make thousands of dollars a week, its not hard to conclude that driving a taxi might be the life.

In a collaboration with ComfortDelGro, Uber launched UberFLASH last Friday (19 Jan), which pairs passengers with the closest available ride, be it a ComfortDelGro taxi or UberX car.

Sadly, since its implementation, the cabbies haven’t exactly been living the dream.

In fact, their earnings have taken a turn for the worse, according to TODAY.

The TODAY article outlines possible reasons for their unhappiness. They include the allegedly lousy rebate scheme, low per-trip fares, unrealistic expectations, and miscommunication with Uber.

Get this: A $35 completion bonus is given to drivers after their first trip given on UberFLASH, provided they register on the app before 28 Jan. Additionally, from 29 Jan to 31 Mar, ComfortDelGro will present drivers with a $5 rebate daily for logging onto the Uber driver app.

However, from 1 Apr onwards, to receive the rebate they need to be:

All that effort to redeem a five dollar discount?

Guess the actual cabbies under this programme agree.

Cabbies are coming forward on Facebook to declare their disappointment in the new scheme, since they made more money in the past. 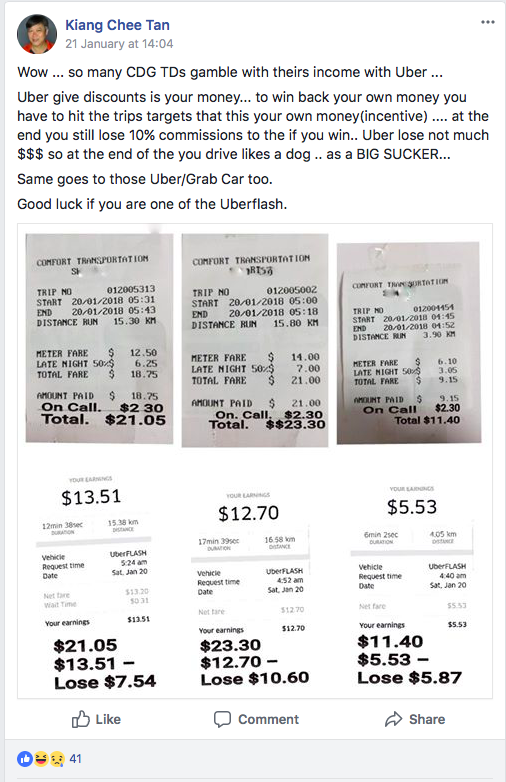 Kiang, a taxi driver, laments about the significantly lower amount he makes from the same distance trips by driving for UberFLASH.

He also complains about being overworked and the poor ‘discounts’ offered under this scheme.

Some cabbies also suspect that Uber is trying to expand their market reach. Hence the use of cut-throat low fares to win commuters over.

A fare for a trip from Choa Chu Kang to Changi Airport (approx 36km, 34 minutes) is $5-6 lower than the typical metered fare, according to a taxi driver who spoke to Today.

Across the span of an entire day, this translates to significant accumulated losses borne by the taxi uncle.

On top of that, Uber takes a 10% cut from all the bookings accepted on the platform by participating taxi drivers.

According to Uber, the point of the collaboration is for commuters to “get a ride faster at an even more affordable price”.

Upon closer inspection, it seems as if they have outwitted us by claiming that cabbies using UberFLASH can “maximis(e) [their] time spent earning”.

This line is rather different from ‘maximising earnings’ or ‘increase in earnings’.

Unfortunately, most of us take it for granted and conclude that they mean the same thing.

No point crying over spilt milk

However, cabbies can always turn the tables on Uber, and choose not drive for UberFLASH. After all, some drivers are already doing it.

And it had only taken a week for the dawn of realisation.

Thankfully, epiphany hit the cabbies fast. Now they are better equipped to make the best decision for themselves.