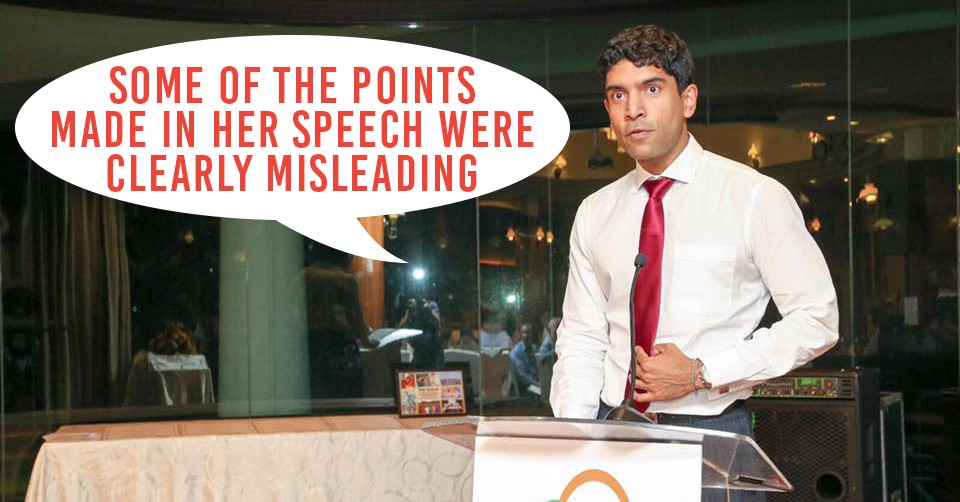 In an article posted on PAP’s website, Member of Parliament Vikram Nair shared his reflections on Ms Lim’s motion that PAP Leaders had misled Parliament into thinking that the decision to count from President Wee Kim Wee instead of President Ong Teng Cheong was due to legal reasons, rather than a policy one.

On 11 Oct, the Sembawang GRC MP wrote an article on his party’s website reiterating Mr Shanmugam’s assertion that Ms Lim had a history of being misleading and dishonest in Parliament.

This is not the first time that former lawyer has spoken up on an issue regarding Ms Lim. On 2 Oct, Mr Nair pointed out that he had lost the adjournment motion ballot more times than Ms Lim, in response to accusations of filibustering to prevent Ms Lim’s motion from being debated in Parliament.

This time, Mr Nair is arguing that the points brought up by Ms Lim during the Parliamentary debate on 3 Oct were “clearly misleading”. Here are 3 points that he raised:

(i) Ms Lim, your argument is irrelevant

The crux of Ms Lim’s argument was that PM Lee and other PAP leaders had misled the house into thinking that the decision to trigger a reserved elections this year (2017) was based on the legal advice from the AGC.

She cited that PM Lee told Parliament on 18 Nov 2016 that he had “taken the Attorney-General’s advice” when announcing the amendment to the hiatus-triggered model. This seemed to contradict with what Deputy AG Hri Kumar said in the Court of Appeal on 31 Jul 2017 — that the AGC were in no position to “tell the Government where to start the count from”.

While Mr Nair admitted that what PM Lee said was “a statement of fact”, he explained that Ms Lim’s argument misconstrued Mr Kumar’s statement. He argued that Mr Kumar was responding to Dr Tan Cheng Bock’s query if an “Act of Parliament had breached the Constitution”.

“What advice AGC had given to the Government on this matter is not relevant to how the Constitution should be interpreted, which was the Deputy Attorney-General’s point.”

Mr Nair also pointed out that Ms Lim failed to mention that even Dr Tan’s lawyer also agreed with this point.

Another point that Mr Nair criticized was Ms Lim’s observation that a Judge showed “scepticism” about how the AGC interpreted PM Lee’s speech during TCB’s appeal.

Ms Lim argued that a Judge showed signs of “scepticism” after Mr Kumar defended PM Lee’s statement on getting advice from the AGC on 16 Nov 2016:

“One should not look at speeches like statutory instruments… He (PM Lee) wasn’t defining presidency in this context as Elected Presidency.”

She came to this conclusion because the Judge had remarked that “the PM was speaking in a Parliamentary debate and would not refer to the elected president for ease of convenience”.

Mr Nair said that this was a feeble attempt from Ms Lim to show that the Court also thought that the Government was wrong, an act he labelled as “disingenuous”.

According to him, all that matters is the Courts’ final verdict that the PM was clear in what he said.

According to Ms Lim, the QC, who is “considered an expert on Westminster model constitutional law”, believed that the Singapore Government had acted unconstitutionally.

What Ms Lim failed to mention, was that TCB later withdrew the QC’s opinion during. TCB’s withdrawal, as well as Ms Lim’s failure to mention the withdrawal during her argument, left a very puzzled Mr Nair.

He also implied that Ms Lim was insinuating that the withdrawn QC’s opinion held more weight than a unanimous decision from the Supreme Court, a move which makes no logical sense according to Mr Nair.

Yet another parting shot to Ms Lim’s credibility

Following in the footsteps of his political comrade Mr Shanmugam, Mr Nair also took a pot shot at Ms Lim’s reputation. He reminded readers that:

“In 2015, High Court described one of Ms Lim’s Parliamentary speeches as an exercise of “suppresio veri, suggestio falsi” — suppress the truth to suggest a falsehood”

Well, with the back and forth arguments between the PAP and its opponents, it seems unlikely that the truth will be brought to light any time soon.