So this whole Amos Yee thing really isn’t going away huh? In a span of 2 hours yesterday (13 May), former Singapore Democratic Party (SDP) candidate Vincent Wijeysingha broke his silence over the Amos Yee issue. And he did so in detail, with 2 long posts on Facebook.

1. He really doesn’t like the way MSM is portraying Amos and his family

He evidently has a major bone to pick with the mainstream media in Singapore, starting with a paragraph on TODAY’s interview with Amos’ grandmother. 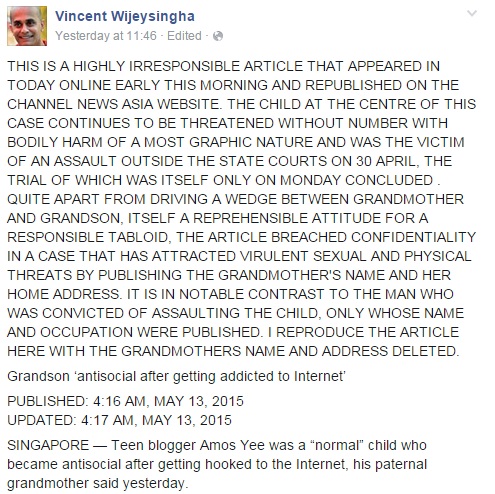 Dat all caps tho.

2. The “authorities” has a history of politicising issues

When five SMRT drivers were in jail following the bus drivers’ strike in 2012, the authorities showed them a photo of me and asked if they recognised me. No doubt someone was most anxious to divert the story from that of labour discrimination to one of political manipulation so as to absolve the SMRT and, therefore, the government, from any culpability.

Dr Wijeysingha was rather outspoken in the aftermath of the 2012 strike, and suggests that “authorities” attempted to put the blame on him, then an SDP member.

While we aren’t quite sure who these “authorities” are, Dr Wijeysingha seems to believe their ultimate goal is to make government policies free from blame.

3. He was happy at Lee Kuan Yew’s passing…

I am one of them: I welcome his [LKY] passing from the loathsome, crepuscular political stage he engendered.

Basically, LKY wasn’t a particularly nice guy to the people he went up against.

4. Social workers have failed themselves

As a social worker I am so thoroughly ashamed of the members of my profession, of social work teachers at SIM and NUS, of the Singapore Association of Social Workers, who have refused, in craven cowardice, to raise their voices in defence of a child whose “crime” was to say something that some, and only some, considered objectionable.

Dr Wijeysingha basically slams all of his peers at their non-action over Amos Yee. Seems like he also thinks that Amos’ words against religion and LKY were exactly just that: Words.

5. Anybody who celebrated *that* Slap is the opposite of human

To harm a child is inhuman; to cheer when it is done is anti-human.

The good Doctor also has some strong views on those who supported Neo Gim Huah’s slap on the teen, arguing that they have effectively supported child abuse. He calls out editor of the now-defunct Breakfast Network, Bertha Henson.

As if to quantify and codify the prevailing temper, that so-called journalist, Bertha Henson, cheered from her cowardly sideline when Amos was assaulted. That malevolent woman, together with everyone who approved of the unprovoked assault on Amos, has forfeited her right to be regarded any more as a human being because she has connived in the abuse of a child.

Check out his second post in its entirety here (it’s pretty long):

We just wonder what Dr W now thinks of Amos after the whole media-trolling fiasco.