Must Share News – Independent News For Singaporeans
Home Lifestyle 12 Weird And Wacky MRT Incidents That Completely Changed Our View Of... Indeed, on a typical train ride, you enter a cabin full of expressionless/angry/sleepy people with their heads down, occupied with their phones.

Most of us rely on the train to take us to and from work everyday, given its convenience (provided the trains don’t fail us, of course).

You see the same faces over and over again – the one guy who’s forever hogging the reserved seat and pretending to be asleep, the same flirty couple who can’t keep their hands off each other, the auntie who can’t stop intruding into your (lack of) personal space with all her groceries.

But the situation isn’t always like this. Occasionally, train rides can be hilariously unpredictable. You’d never know who’s going to walk into the cabin and surprise, delight, disgust, or terrify you.

Need proof? Here are 12 things you might see on your daily commute. Some would surely brighten your day.

1. Nap without missing a stop

We’ve all been through this – conking out on the train after a long day in school or at work. Horror of horrors – you get jolted awake when you find yourself at an unfamiliar station. This probably wouldn’t be a big deal, except that you’re thoroughly exhausted and just want to head home ASAP.

This one girl came up with a plan to catch a few winks without having to risk missing her stop. This was what she wrote on her whiteboard:

Please wake me up at Sengkang, thank you. P.S. If you want to Stomp just Stomp, I’m too sleepy. 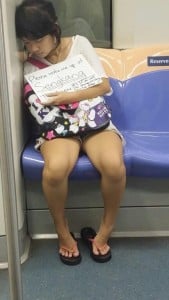 Somebody give that dude a coconut tree and a personal bevy of backup dancers already.

Why do ballet under the stars when you can do it on the MRT?

Pole dancing classes don’t come cheap – so why not practise while travelling? This young duo probably shared the same sentiments and showed off their pole dancing moves. The girl grabbed the handrails, raised her legs in mid-air and flipped upside down, with the guy as a ‘pole’. 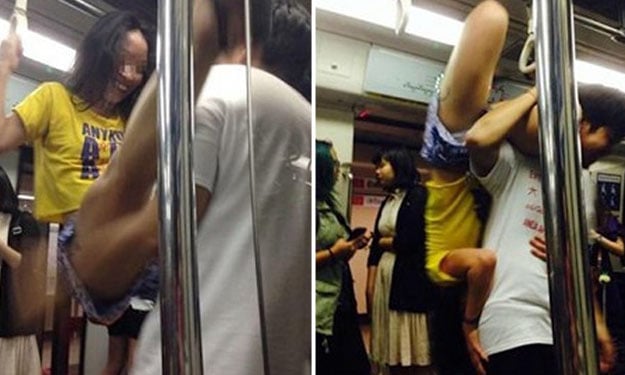 Put Ip Man in Singapore and he’ll probably be too busy to practise his wing chun moves in our fast-paced society. The next best thing? Train while on the train.

Everyday can be cosplay day.

7. Get offended by someone’s tee

Lesson learnt: if you do not wish to instigate anyone, don’t wear a tee that calls for a reaction. One that says “Peace Out” should be fine.

Why waste time while commuting? Who says you have to head to Sentosa to get that perfect tan? You can suntan on the train, y’know. The windows allow the good ol’ sun rays to stream through – this is how you get your tan without being late for work. Early last year (13 Mar 2014),  a man who boarded the train at Yishun MRT Station stripped naked and performed an indecent act in the train. He later laid on the floor, but was escorted by SMRT staff soon after commuters pressed the emergency button.

And take the opportunity to lecture an ah lian, of course.

The ah lian was eventually hailed as the most polite ah lian, while the auntie was seen as ungrateful.

Have you seen the trains in other countries? They ensure commuters get ample legroom. This should be a right in Singapore too!

Must save time  – auntie very busy one you know? Go home must cook dinner, do laundry, wash toilets, where got time to take care of feet?

With SMRT breakdowns a common occurrence, it really might be faster running from one station to another.

Who says our daily commute has to be a boring one? Enter Singapore – the land of the weird and wacky. These incidents show that we’re a quirky nation with no lack of diversity. After all these, you’ve surely gotta love your ride. *cues dim sum dollies*

But of course, all is forgotten when you wake up the next morning and face your worst nightmare all over again – the morning commute.

Featured image via Twitter/ STOMP
With reference to STOMP

Watsons Charges $0.10 For Plastic Bags On Tuesdays, Customers Encouraged To Bring Their Own Bag