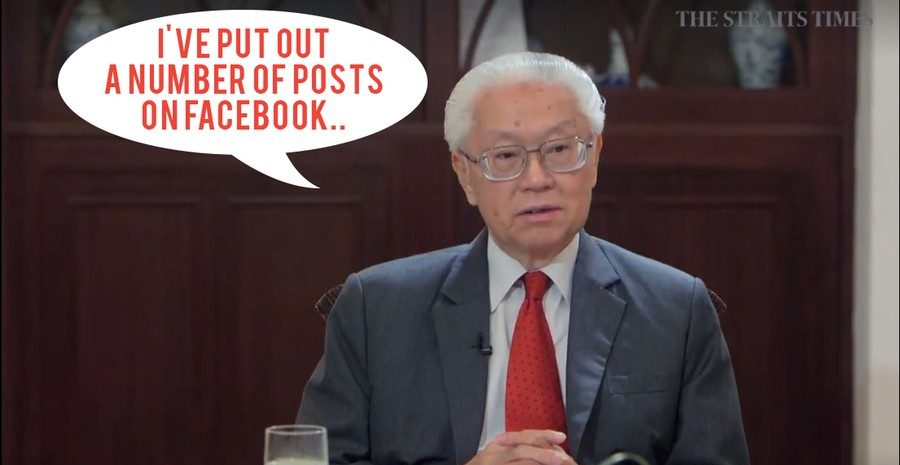 Dr Tony Tan’s term as President of Singapore is about to end soon, with the Nomination Day for the Presidential Election 2017 set for 13 Sept. In his 6 years as president, Dr Tan has overseen rather tumultuous events, such as the Little India Riot and increasing threat of extremist terrorism.

But the inherent job scope of the President is such that many feel like he doesn’t do much. There has been much talk about the ease of his job, requiring him to just appear at every National Day Parade and wave at people, and go home to collect his million-dollar salary.

So, with just days left of his presidency, The Straits Times sat down with Dr Tony Tan, and talked about his tenure as the President of Singapore. After all, the role of president is a multifaceted one, and he would surely have ample time to explain the intricacies.

What has Tony Tan done as President?

Well, he starts off saying that some of the President’s responsibilities are “not well understood by the public”.

He then talked about what the actual responsibilities of the President:

[The President] has to build a sense of community, build a cohesive society, where people help each other and look out for each other, a concern for each other – especially in these difficult times now, when we have problems of radicalization and extremism.

Very valid points indeed. In fact, these responsibilities are stated in the Istana website, under the “Community” part:

Well, let’s hear more about how he has fulfilled this responsibility.

Fulfilling his responsibility as President

In 2013, as the Little India Riots raged on, Dr Tan received news despite being in Germany at the time. Nonetheless, he was briefed by Deputy Prime Minister Teo Chee Hean about what had happened, and he eventually decided that he should deliver a statement in the wake of what had transpired. He decided it was important to “emphasise the need for calm, for people to not take matters into their own hands, (and) reinforce the importance of racial harmony”.

And in case you can’t see it, here it is again: 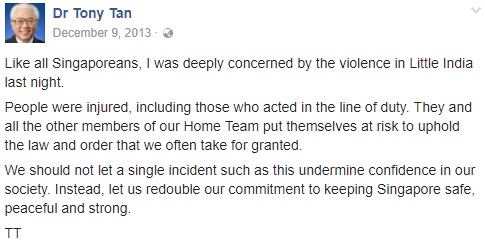 So, as Dr Tony Tan explains, in the wake of Singapore’s first riots in 40 years, President Tony Tan reacted by posting a 3-paragraph statement on Facebook.

Dr Tan then moves on to talk about increasing radicalism in Singapore, specifically pointing out the case of an infant care assistant who planned to go to Syria to become a martyr’s widow, and the 2 auxiliary police officers who had been radicalized.

In response to such threats, the President did his utmost to ensure that Singaporeans remain united, and chose to do this, by “put[ting] out a number of posts on Facebook to emphasise the need of why multiracial harmony (and) multicultural understanding is fundamental to Singaporeans”.

There it is. Right from the horse’s mouth. He’s helped foster good relations and maintain multiracial peace, by posting stuff on Facebook.

Featured image via The Straits Times