As most people would know, playing rugby takes more than just an intimidating war-cry and solid bodies.

Some serious physical endurance and mental capacity is needed to play out a winning strategy in a rugby match.

Now try doing all that, while wheeling yourself around in a wheelchair.

That was the task that faced Olympic champions, Fiji 7s, during their friendly match with Singapore’s very own Singapore Wheelchair Rugby (SWR) team. 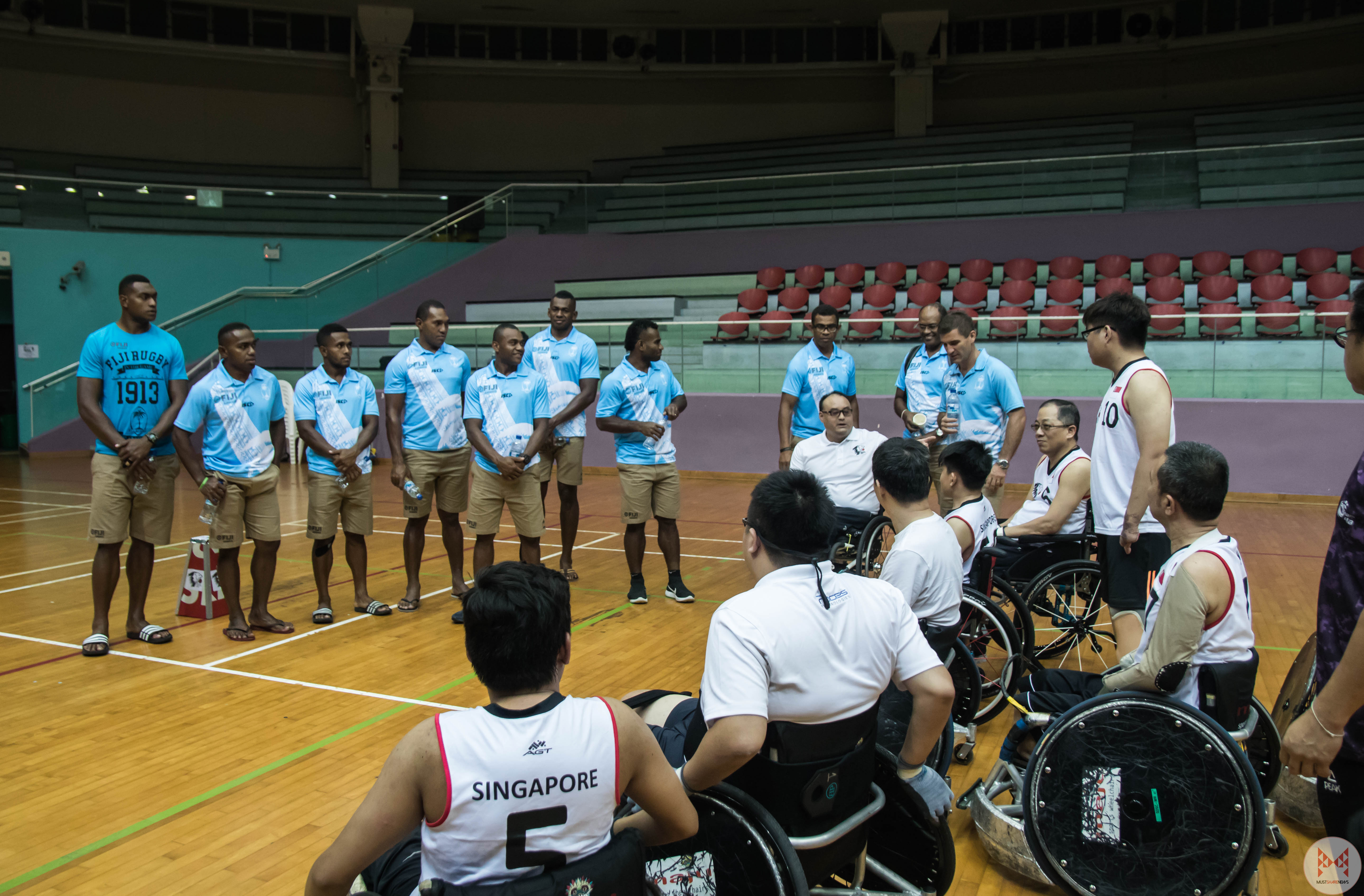 Before the match started, SWR went through the rules and gave the Fiji 7s a crash course in wheelchair-maneuvering.

Teaching them pro-tips and tricks to get as agile as possible in their new vessels. Turns out, wheelchair rugby is fairly similar to regular rugby, with the exception of players having to maneuver themselves across the playing space in a wheelchair.

After having some practice laps in a short game of “monkey”, the players then engaged in a full friendly match.

They split into two teams, consisting of members from both the Fiji 7s and SWR.

What ensued was a fierce match, filled with smiles, laughter and a hint of mischievousness as players inevitably ‘crashed’ into each other all in the name of fun. 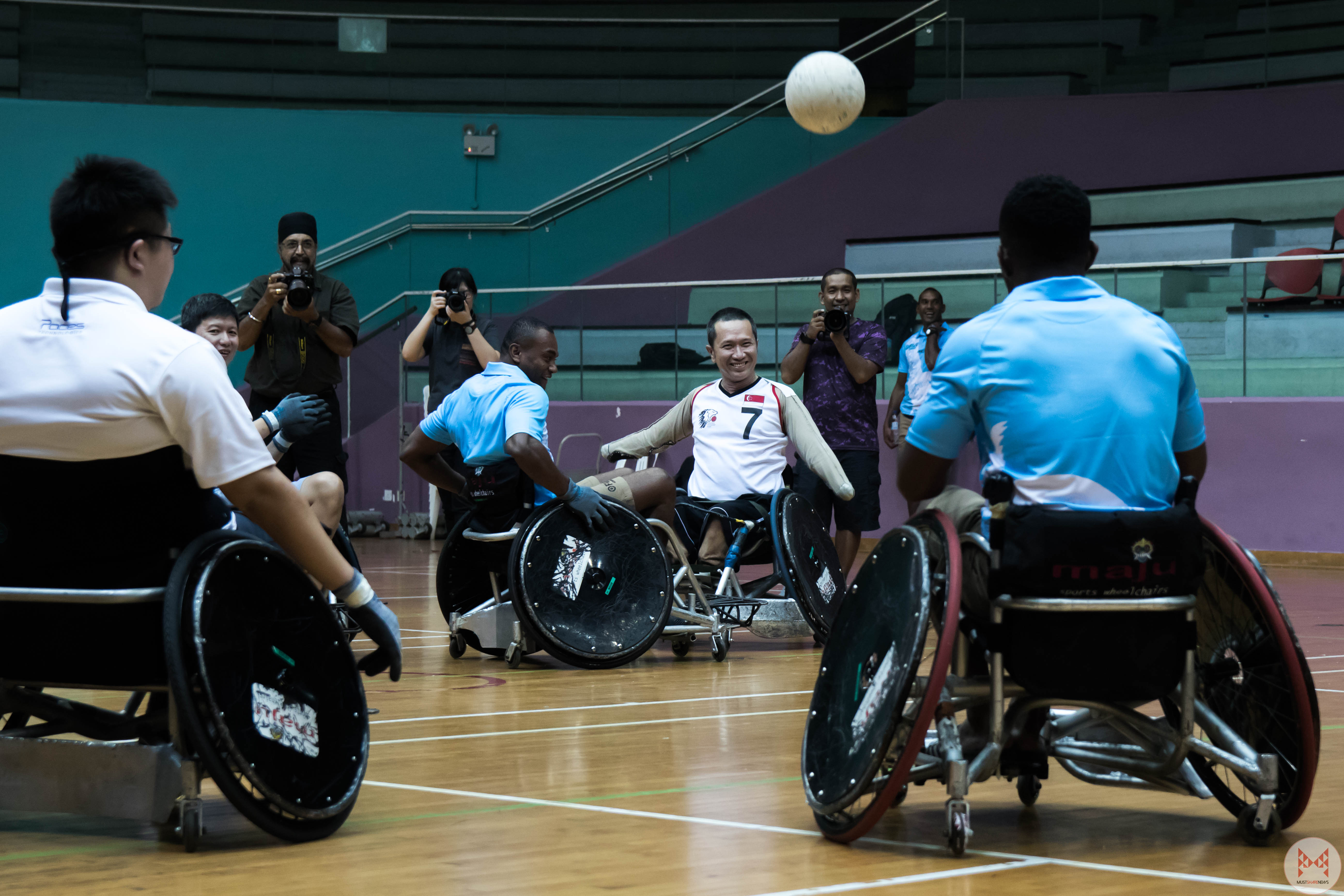 More than a good sport

While the match played on, we learnt that there was much more to wheelchair rugby that the sport alone.

We spoke to Mr Richard Kuppusamy, the captain of the SWR, who helped us understand that the game ultimately serves as a social outlet for the disabled.

Primarily its [wheelchair rugby] about camaraderie…about building up a team to give people a social outlet. Disabled people have the same needs and desires as anybody else.

Mr Kuppusamy shared that it served as an outlet for everyone to have “a bit of fun, recreation and fitness”.

In other words, wheelchair rugby provides a common ground for all individuals to interact with one another and build strong social ties.

In turn, this helps individuals who face insurmountable odds, to feel more confident and increase their self-esteem. 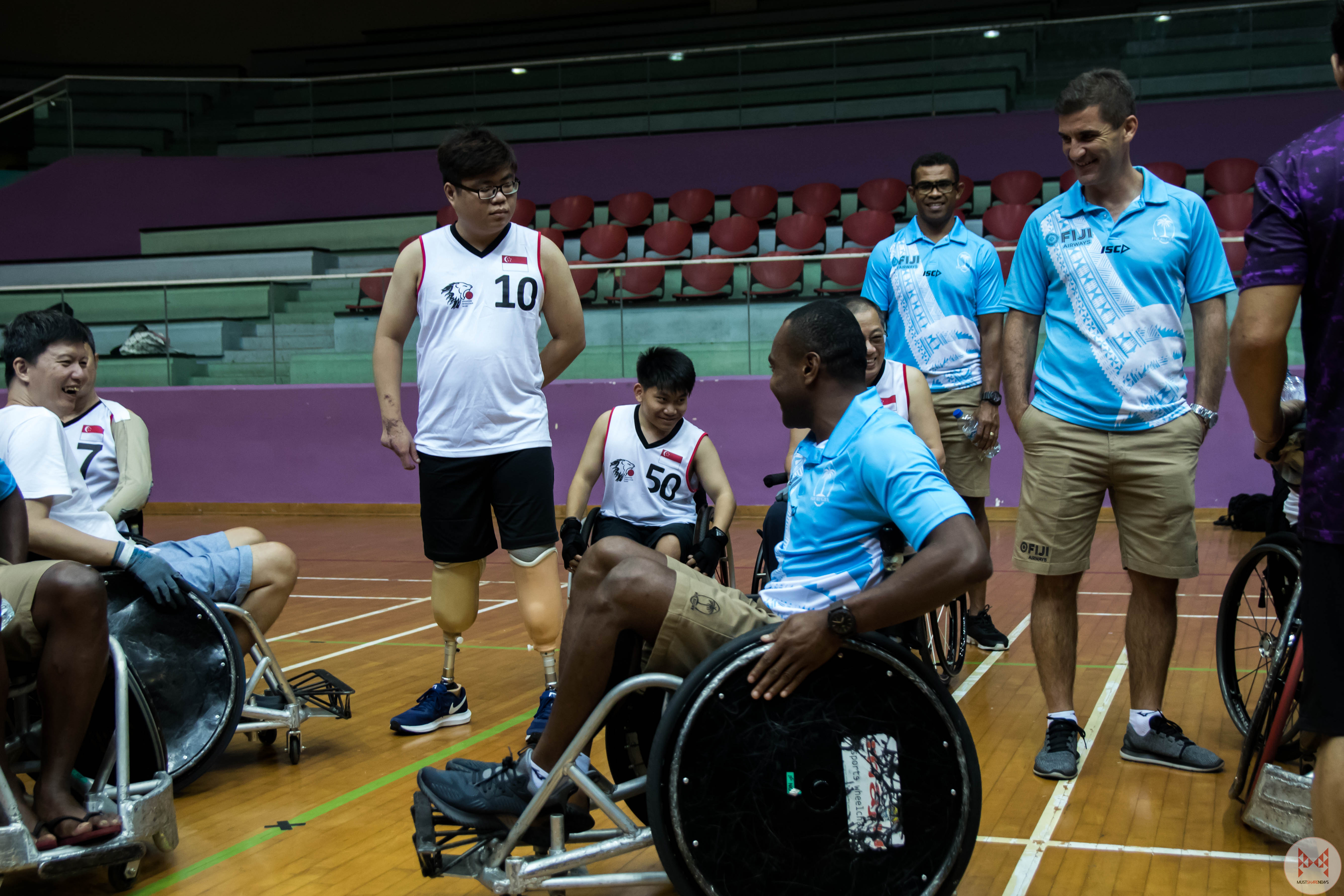 He added that the inclusive and non-discriminatory nature of wheelchair rugby creates a common ground for social interactions to take place.

Encouraging people with disabilities to break down barriers through the sport, he duly noted,

The wheelchair is a great equaliser.

Truer words have never been spoken.

According to Mr Kuppusamy, most of the players of wheelchair rugby are those who gain their disabilities through accidents and injury.

The main challenge for these individuals is often recovering from the sudden changes in their lives.

Playing wheelchair rugby – a team sport – helps reassure them that support is available from their loved ones, and people around them.

As a close friend and captain to many of SWR’s members, Mr Kuppusamy can certainly vouch for the fact that many players have grown to be more confident after playing the sport.

You wheel never be alone

When asked what advice he would give to others who face adverse odds of their own, Mr Kuppusamy shared how he considered wheelchair rugby a physical representation of every man’s struggle.

You have to rise to the challenge, both in life and in rugby. Don’t let people beat you down. The harder you get hit, it’s a matter of getting back up and going for it again. Keep driving for the goal and keep moving forward. 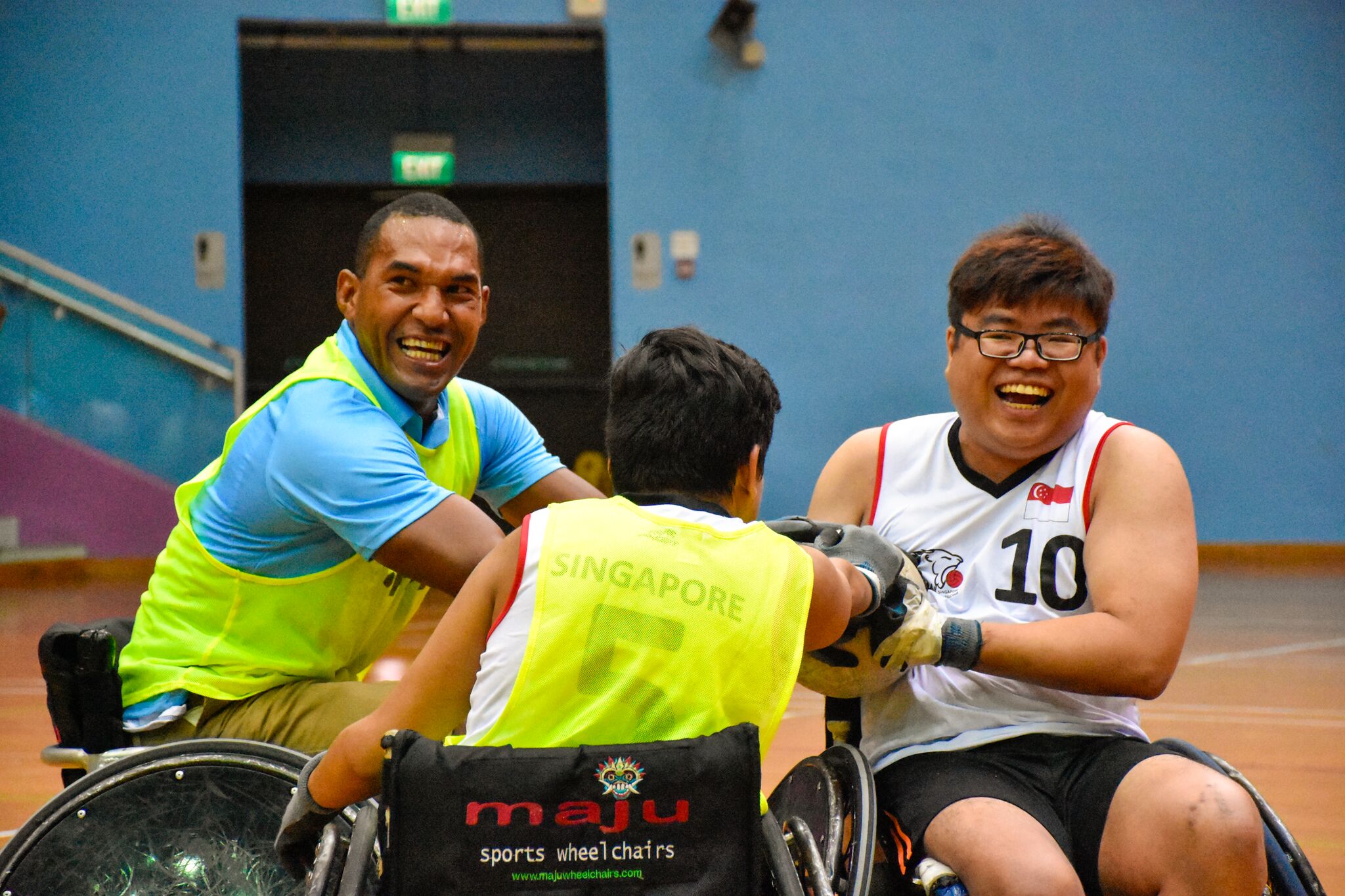 Simply put, he felt that no one should have to face their challenges alone.

You find a group of people to help you along the way, but you also have to be willing to push harder yourself.

A match to remember

The result of the friendly match wasn’t really clear. We didn’t keep track of the score either.

What remained crystal clear was that the human spirit lives on stronger than ever, in the hearts of these men and women who’ve found an outlet to inspire and support each other. 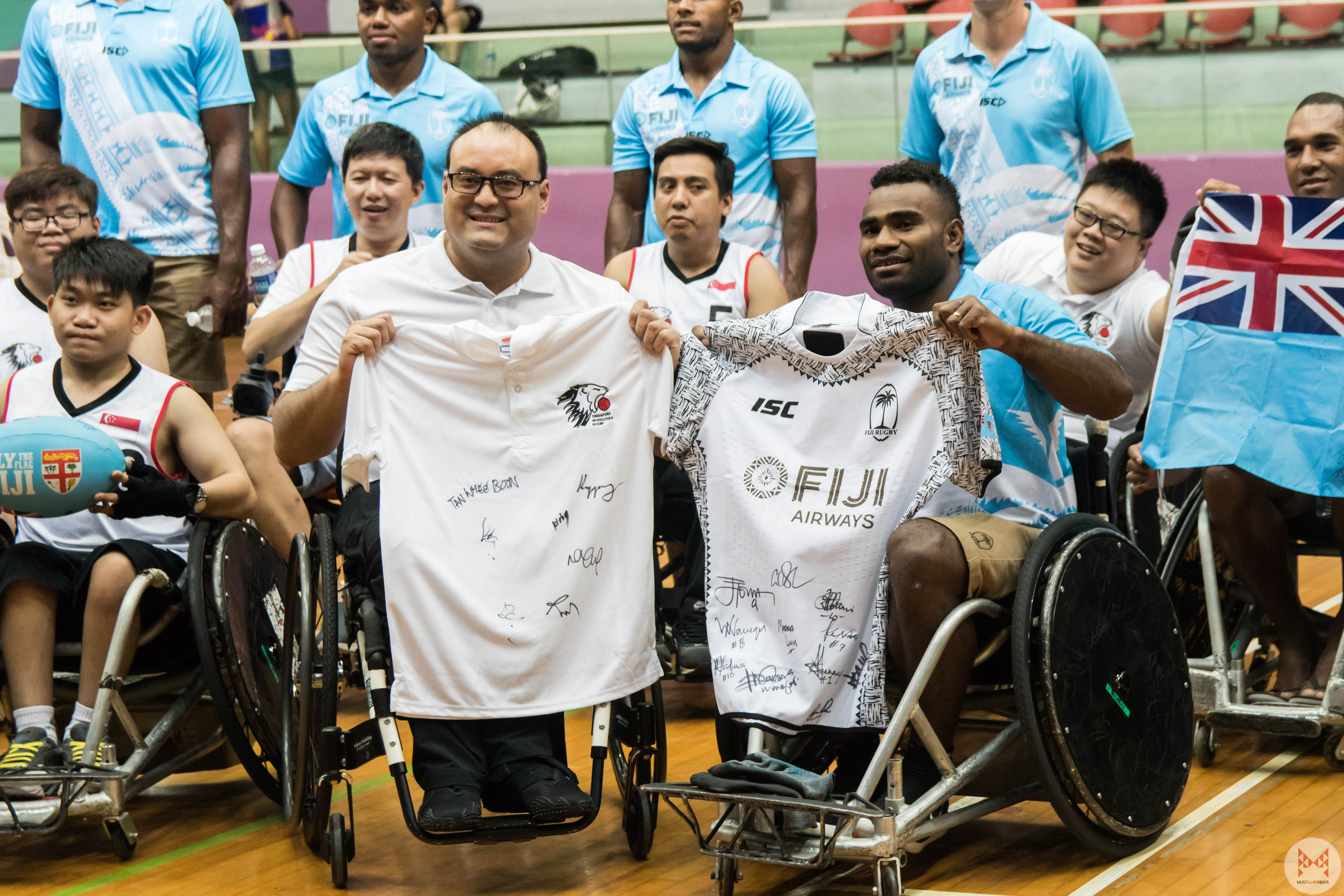 We’d like to thank Mr Richard Kuppusamy, SWR and the Fiji 7s for allowing us a glimpse into the world of wheelchair rugby.

For this match will definitely be one to remember.

We wish the Fiji 7s the very best in their upcoming World Rugby Series matches in Singapore, and SWR in their future endeavours. 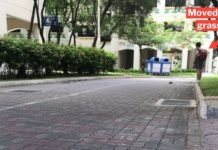