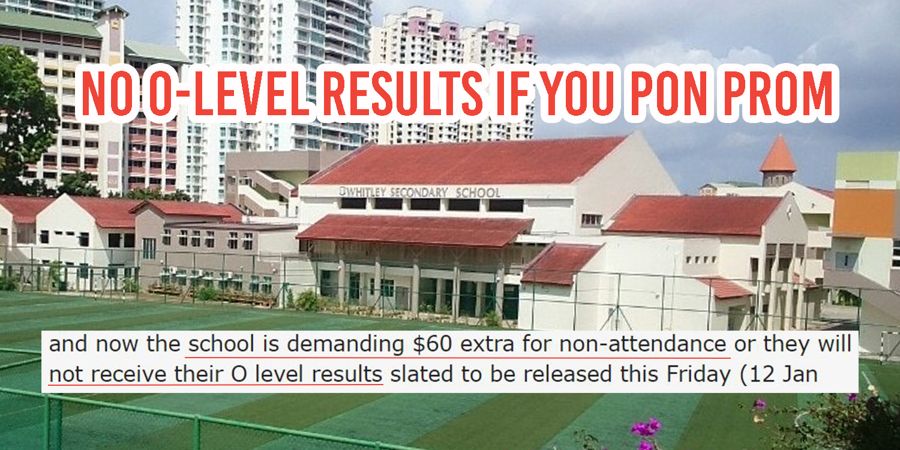 Update (11 Jan): SqueakyArmChair’s mother was contacted by the Principal of Whitley Secondary School, informing her that the school will forgo the $60 penalty. She’ll be updating the Reddit thread on Friday (12 Jan) regarding her sister’s O-level results collection.

If you don’t attend something, you shouldn’t have to pay for it.

A Whitley Secondary School student, however, claims that while going to prom costs $50, not going to prom at all, will set her back a grand total of $110.

Which makes absolutely no sense at all.

Students who miss prom and decide not pay the penalty of $60, will enjoy the added bonus of — not receiving their O-level results this Friday (12 Jan).

You, after reading the first paragraph.
Source

Yikes. Here’s the lowdown on what happened, according to this Reddit user.

No O-level results for students who pon prom

The sibling of a Secondary 5 student – Reddit user SqueakyArmChair – at Whitley Secondary School aired her grievances about her sister’s plight on Reddit.

Here’s a brief summary of how the events unfolded:

If they chose not to pay the penalty fee, they would be barred from receiving their O-level results.

The form teacher of their class allegedly sent them this message in a group chat:

A reminder to clear your debts (prom/school fees) by this Friday. You will not be given your results until outstanding matters are settled. Please don’t put yourself in an unfavourable position this Friday yea? see y’all!

According to SqueakyArmChair, this wasn’t a joke. An actual payment collection sheet had circulated around the class.

The school’s side of the story

Disturbed by the situation, SqueakyArmChair immediately notified the Ministry Of Education (MOE).

A member of Whitley Secondary School’s staff then contacted SqueakyArmChair to notify her that:

Following which, the school did not retract their demands for the $60 penalty.

At the time of writing, her sister has also not settled her payment yet.

Why didn’t the form teacher help her student?

SqueakyArmChair acknowledges that it was partially her sister’s fault for not reading the fine print on the form. She also did not translate everything for her parents, before they signed the agreement form.

But we can’t help but wonder why the girl’s form teacher did not step in to help her students, before this got out of hand.

As their form teacher, she could have sought an exception for her Sec 5 students from the prom organising committee.

After all, the Sec 5 students involved had attended prom before. Not wanting to waste money on a second prom – that your batchmates aren’t going for – is a pretty “valid reason”.

Compulsory prom? No thanks.

Prom should be an enjoyable experience for everyone, as it’s the grand finale to every student’s journey in high school.

If a student doesn’t want to attend prom, we should respect their decision.

Whitley Secondary School’s staff clarified that the prom was compulsory because the school decided to bundle the Sec 5 interview course with the prom as part of their “student development programme”.

Clearly this staff member hasn’t been to many proms as we’re not sure which part of it helps ‘develop’ students.

The question also remains about why MOE’s policy of withholding O-level results due to outstanding fees is applicable to events like prom.

These events fall out of the regular curriculum and schooling hours anyway.

We at MustShareNews are keeping our fingers crossed for those ensnared in this saga.

Hopefully this poor student will be able to receive her results punctually with everyone else this Friday.