Supporting their husband may soon become a legal responsibility for wives in Singapore, even after a divorce, if the man stops working due to physical or mental illness.

The proposed changes to the Women’s Charter (Amendment) Bill were made on calls over the years to extend the spousal maintenance to men. The public are invited to give their feedback on proposed amendments until 8 November.

The proposed changes also seeks to put divorcing parents through mandatory parenting programmes for the sake of the child. 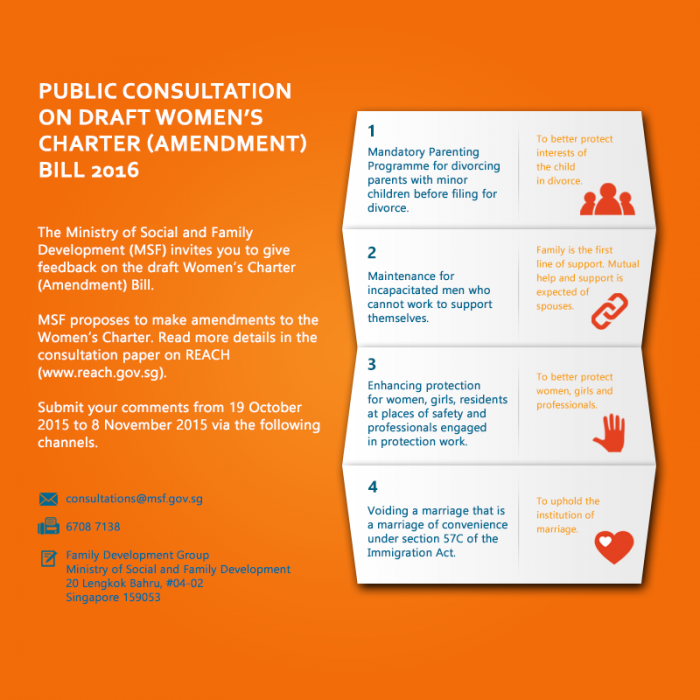 Government portal REACH shared that the court will consider the woman’s financial circumstances and needs of the children before ordering the maintenance payment for the disabled or ex-husband.

Media reports reveal that over the last few years, there have been calls made to award maintenance based on need rather than gender, as more women have high-paying jobs.

Last year, Justice Choo Han Teck rejected the request of a regional sales manager of a firm for a $120,000 maintenance fee from her ex-husband a senior prison officer. She earned slightly more than him. The judge questioned the right of every woman to seek maintenance in a divorce.

He said that “unalloyed right” was a “patronising gestures” in the Women’s Charter which “belie deep chauvinistic thinking”.

While the move points in the right direction towards gender equality, AWARE has also shared on Facebook that the maintenance should be given according to needs instead of gender. Further, research has found that there are far more women who do not have income due to family commitments.

MSF spokesman also told media that “Feedback from stakeholders, however, indicates that our society is not ready to accept that women have the same responsibility as men to support their spouse or ex-spouse.”

Marriage in Singapore and Southeast Asia is still largely a gendered affair, with men and women fulfilling different investments in the family. A survey released by MSF on the social attitudes of Singaporeans in May 2015 revealed that there were more wives (59%) who said that they did the caregiving and household chores than the number of husbands (3%) who said they did. 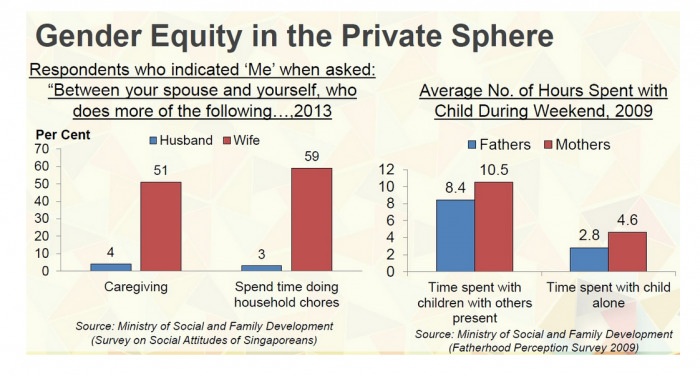 When faced with the reality of the gendered roles in marriages in Singapore where home care is still largely a woman’s mantle, it is not just financial contributions to the family that should be considered but the non-material investment into the family too.

Featured image via Wikimedia
With reference from Channel NewsAsia, REACH