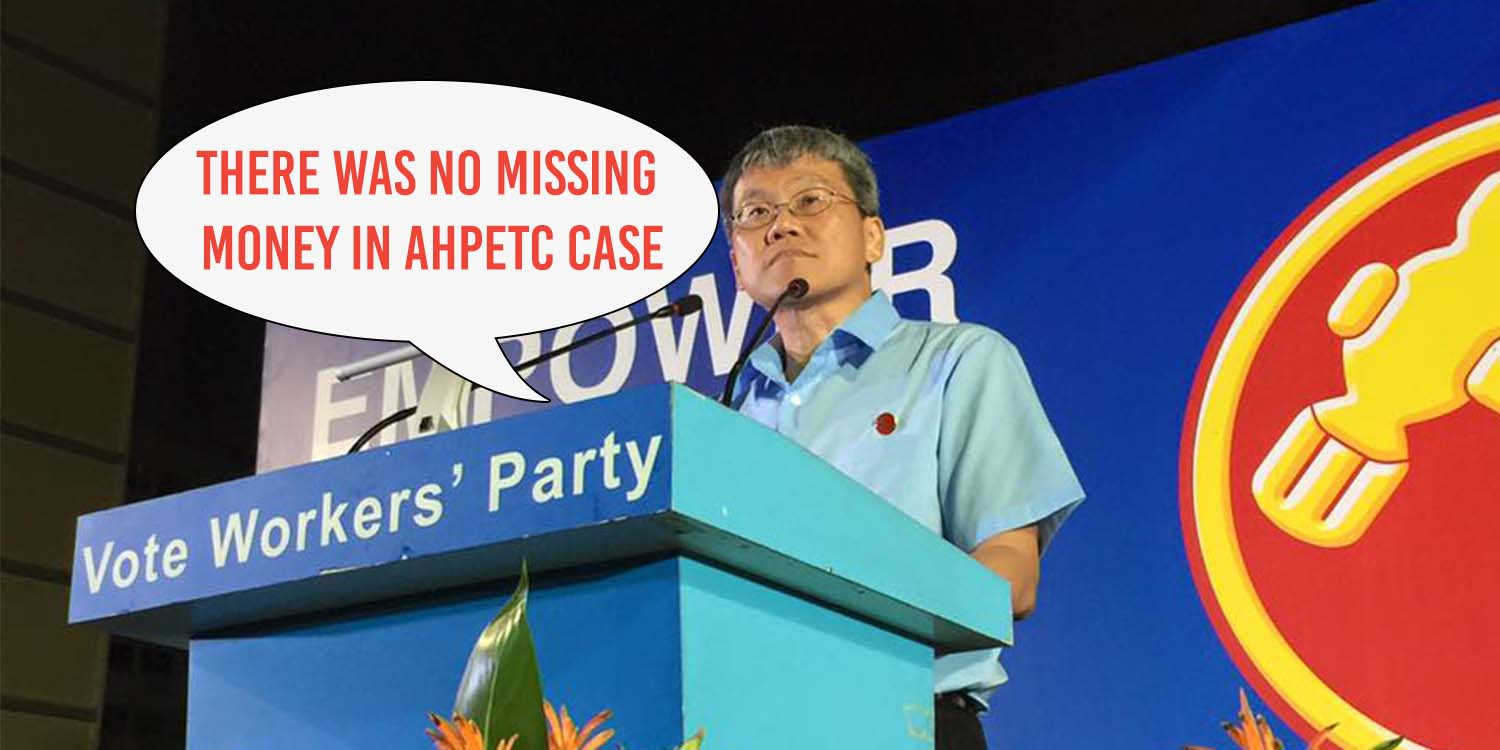 The veteran MP’s campaign for the parliamentary seat included allegations that there was an “unaccounted for” sum of S$22.5 million.

The money was initially transferred to the Workers’ Party (WP) when they took over the constituency in 2013, following Lee Li Lian’s by-election win. 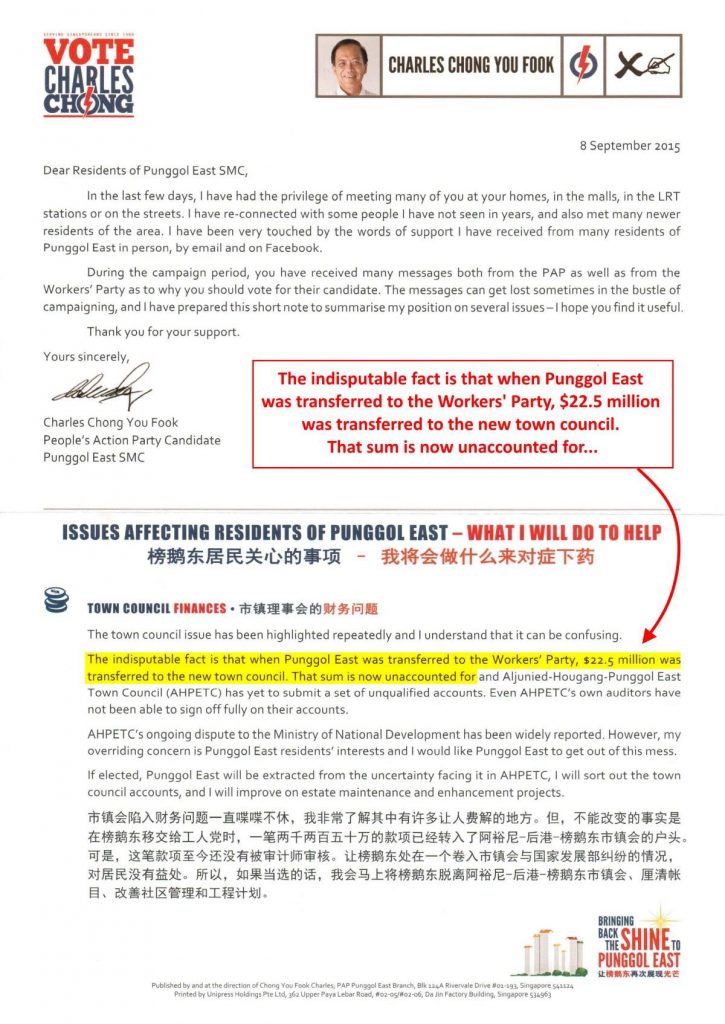 This allegation, coupled with his promise to have Punggol East “extracted” from the “uncertainty” surrounding it, may inevitably have helped Mr Chong edge past Ms Lee to garner 51.76% majority of the public vote.

But apparently, the aforementioned S$22.5 million never existed — at least according to what WP’s Mr Png Eng Huat is currently implying.

In a Facebook post on 15 Feb, Mr Png who is the MP for Hougang SMC, revealed the findings of a personal investigation, 30 months in the making.

Here’s a screenshot of his post. We summarise the points made and issues raised after the break. 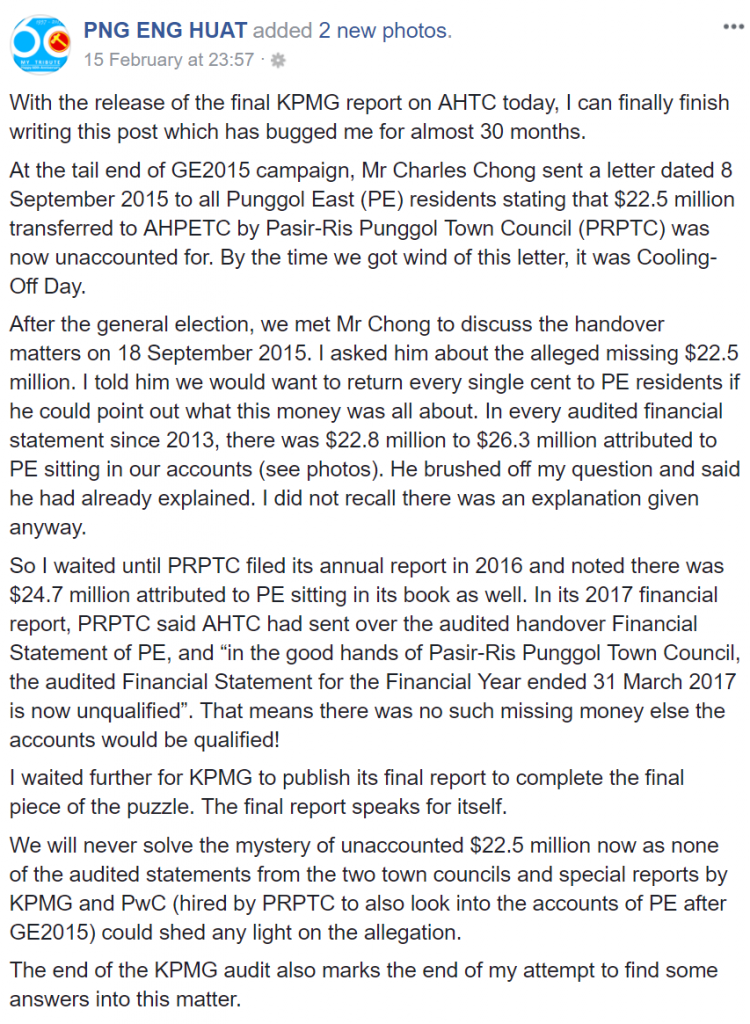 Mr Eng’s post comes after KPMG released their final report on Aljunied-Hougang Town Council (AHTC), declaring that the Town Council had has resolved all financial and governance lapses.

The S$22.5 million was brought up by Charles Chong in an open letter dated 8 Sep 2015 to Punggol East residents.

In the two days it took for WP to discover it, wrote Mr Eng, it was already Cooling-Off Day and no action could be taken.

After Mr Chong won the election by a very slim margin of 1156 votes, Mr Eng – presumably with other WP members – met with Mr Chong to discuss “handover matters.”

At this meeting, Mr Png quizzed him about the alleged missing S$22.5 million, telling him that “we would want to return every single cent to PE residents if he could point out what this money was all about.”

However, he was “brushed off” by Mr Chong, who said that an explanation was already given.

Mr Eng also supported his argument with screenshots taken from audited financial statements since 2013, which showed that there were $22.8 million to $26.3 million “attributed to PE sitting in our accounts.”

After capturing PE in 2013, this statement reflects the transfer of S$22.7 million to WP town councils, jointly known as AHPETC. Notice the dash under the 2013 column which signifies that the sum was newly received in 2014.

No surprises here. PE remained part of WP’s territory until 11 September, which is after the financial year ends on 31 March. In 2015, the sum wasn’t there anymore.

The sum of money in the brackets indicate a negative value i.e. the cash transferred to PRPTC in 2015, after Mr Chong captured the constituency.

A sinking fund is basically a savings account that you deposit money in regularly and can only be used for a set purpose, like town council stuff.

This shows the PE funds going over to the PAP-run town council’s side. Everything checks out here.

When the PAP-controlled Pasir Ris-Punggol GRC filed their annual report, Mr Eng went through it with a fine-toothed comb and found $24.7 million attributed to Punggol East on the books.

The “final piece of the puzzle” fell into place with the final KPMG report.

Saying that it “speaks for itself”, Mr Eng concluded by expressing his reasonable satisfaction that the S$22.5 million never went “missing” at all.

The Straits Times reached out to Mr Chong for comment on the matter.

Mr Chong clarified that back in 2015, AHPETC’s financial statements were qualified by their own auditors.

This made the statements “unreliable” accounts for the money transferred to them by Pasir Ris-Punggol Town Council after the by-election in 2013.

He continued his rejoinder by bringing attention to the ongoing case against members of AHTC:

Key office holders of AHTC will still have to account for more than $33 million … when the suit … comes up in court later this year.

Smells like a little bit of political taichi, wethinks. 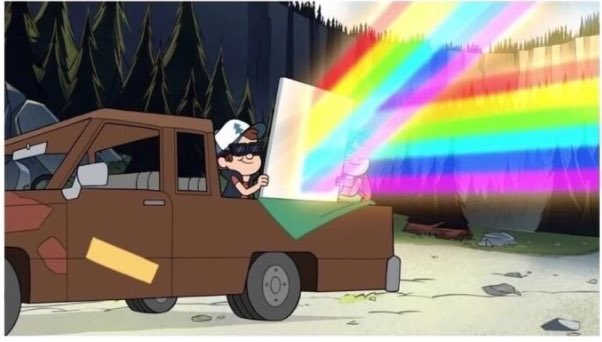 If you cannot convince, confuse
Source

While the AHTC case against Low Thia Khiang, Sylvia Lim and Pritam Singh has yet to be heard, it doesn’t change the circumstances regarding Mr Chong’s open letter to residents.

The fact that he used the word “indisputable” to describe the phantom s$22.5 million sum is also head-scratching.

Beside, one can’t help but question the timing of Mr Chong’s open letter – two days before Cooling-Off Day.

With these questions swirling around, Mr Chong, who’s a member of the Online Falsehoods Select Committee, could very well promote his cause better by ensuring that he abides by the same rules.

Featured image from The Workers’ Party.