Since watching endless qualifying matches can be a chore for all you desperate housewives, girlfriends & boyfriends, here’s an extra reason for non-football fans to stay glued to their screens.

We’ve pitted 32 of the hottest players from every qualifying team against their opponents in the upcoming group games.

So you know exactly when and who to look out for. 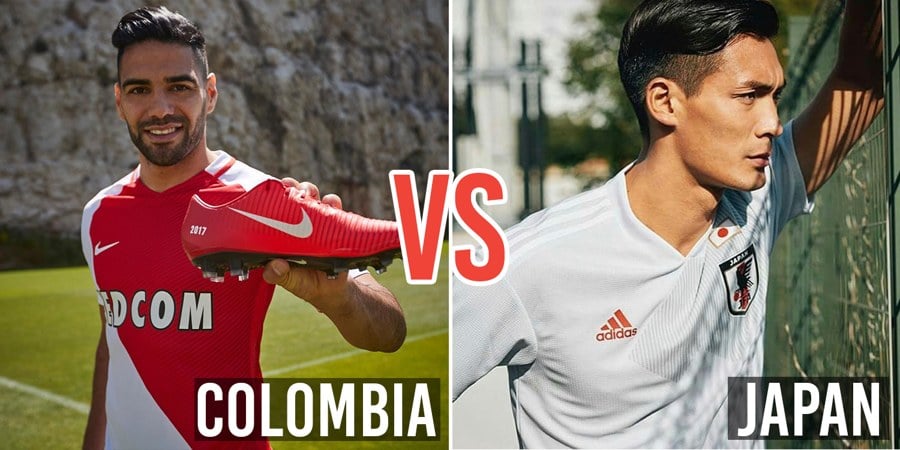 Falcao’s a story of a guy who didn’t get to shine in some failed loan spells in the Premier League. So, the World Cup is his chance to really put his best foot forward.

Tomoaki Makino has always been a fan favourite, with 360k followers on Instagram, and hoards of international fans fawning over his incredible physique. 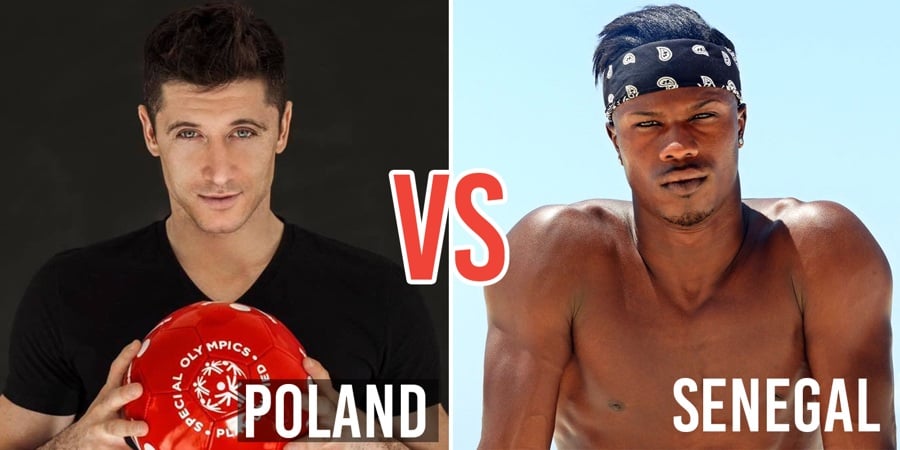 Lewandowski is no mean feat. He scored 16 goals in the qualifying rounds for the World Cup.

Senegal really has its work cut out – this is its first World Cup in 16 years.

Keita, however, has already scored in well in our hearts. Here’s a Russian called “Roman” and an Egyptian called “Ramadan”. But don’t let their unique names fool you.

These two handsome players will be facing off to steal hearts and goals at the World Cup. 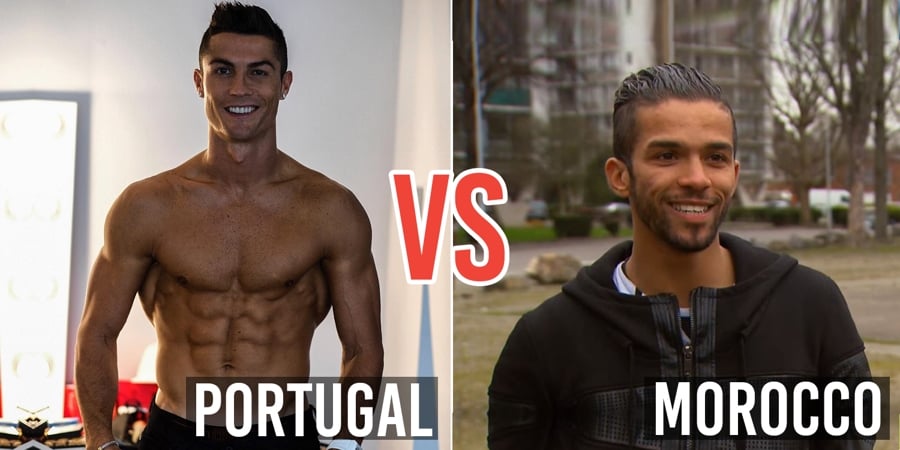 Wait a minute though, Portugal doesn’t only have one hot and famous player. There’s Andre Silva too. 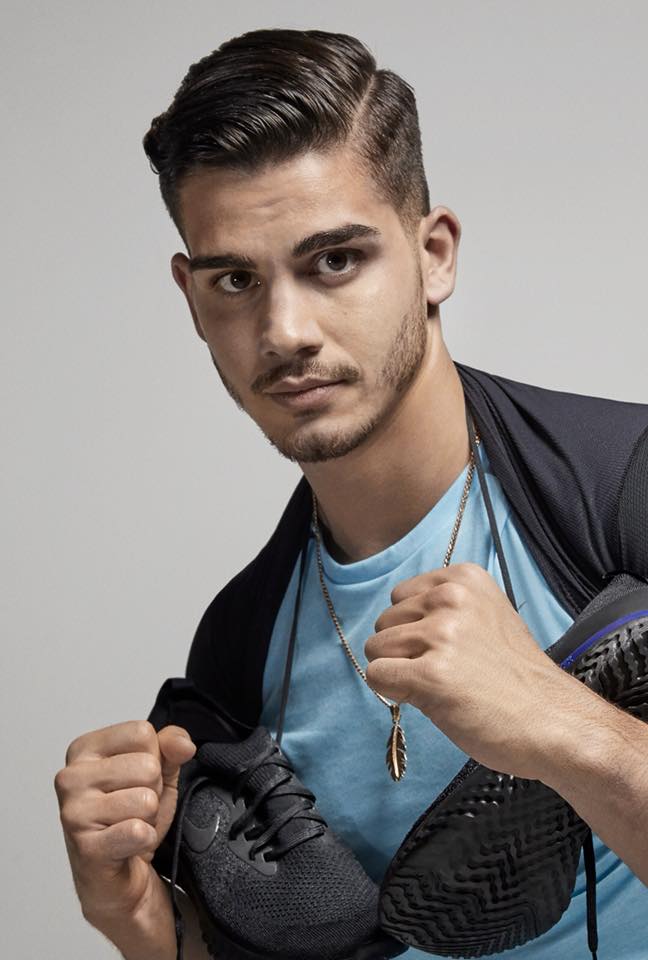 And he’s already told the world what he thinks about the game with Morocco.

I think we are stronger than Morocco if we compare the two teams, but I’m not saying the game will be easy for us. 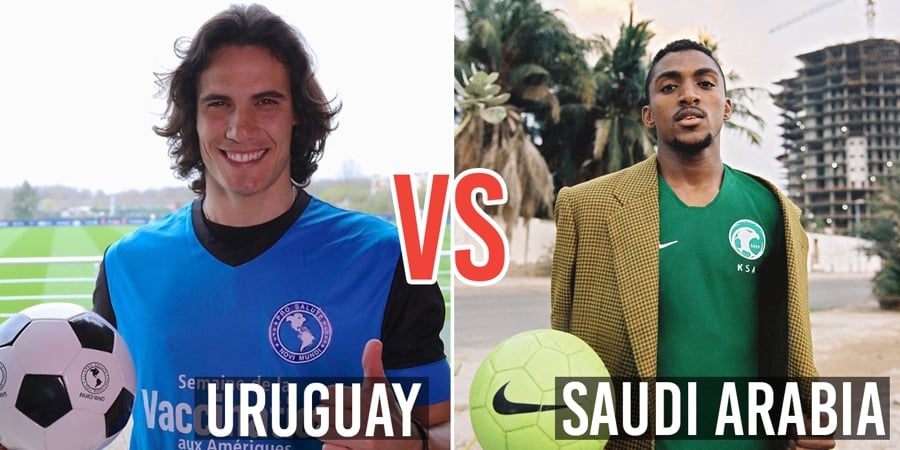 Mohammad Al-Sahlawi’s chiselled features have snagged the attention of fans all over the world.

But after Saudi Arabia took a severe thrashing from Russia during their opening match, meeting Uruguay in their next match won’t be easy.

Edison Cavani’s as handsome as he is talented — he was the top scorer in South American World Cup qualifiers.

Cavani and his more famous counterpart Suarez have scored a whopping 93 goals between themselves. 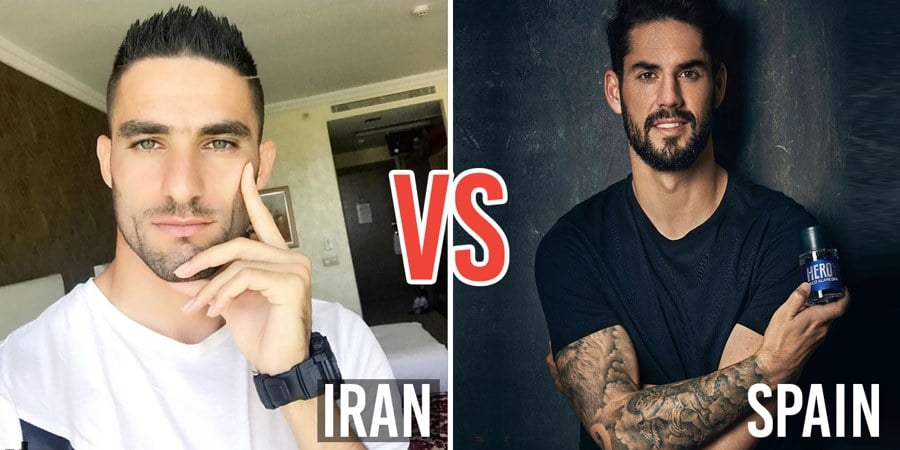 Milad Mohammadi’s stunning grey-green eyes are one of his best features, so here’s some good news for the ladies.

They say good things come in pairs — he has a twin brother who’s also a soccer player, albeit a little less talented.

Don’t let Isco’s model-esque selfie deceive you, he’s commonly described as one of the best attacking midfielders in the world. 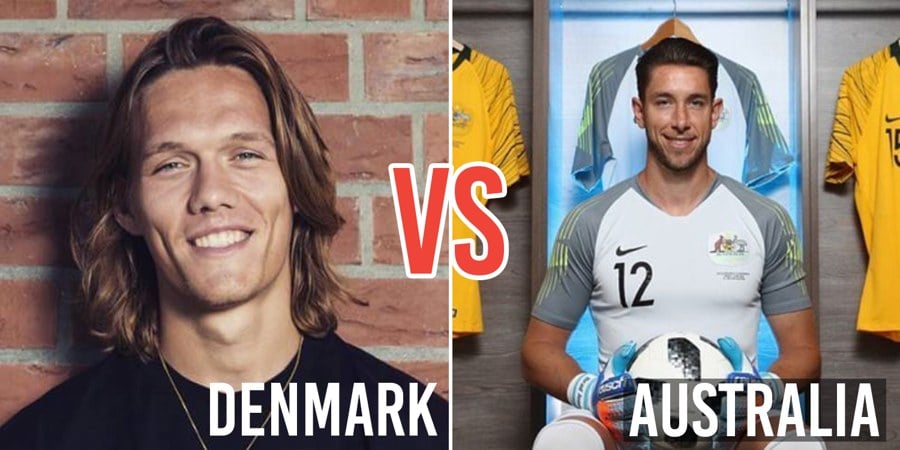 This match pits giants against giants. The great Dane is 1.99m while Brad from down under is 1.94m.

When Vestergaard went to Japan, he reportedly had to crouch just to get under the showerhead. 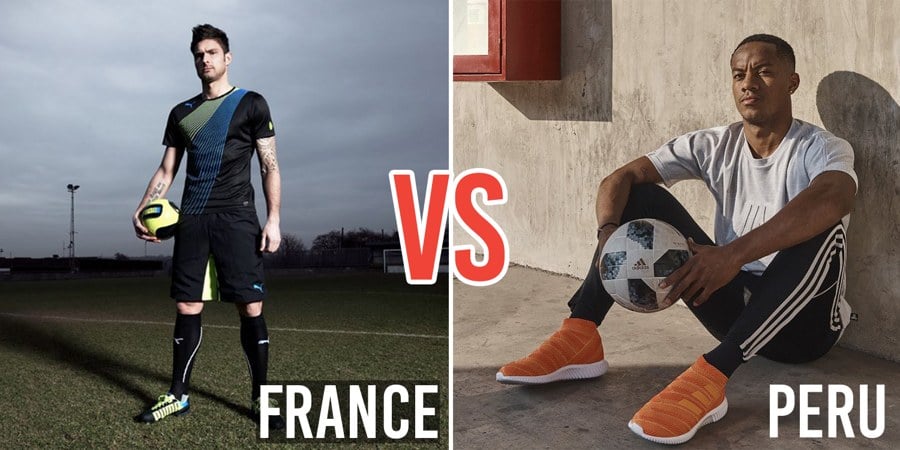 Oliver Giroud is commonly described as one of the most gorgeous men in the soccer sphere.

He did, however, mysteriously kick off the World Cup with a bandage tied to his handsome head. 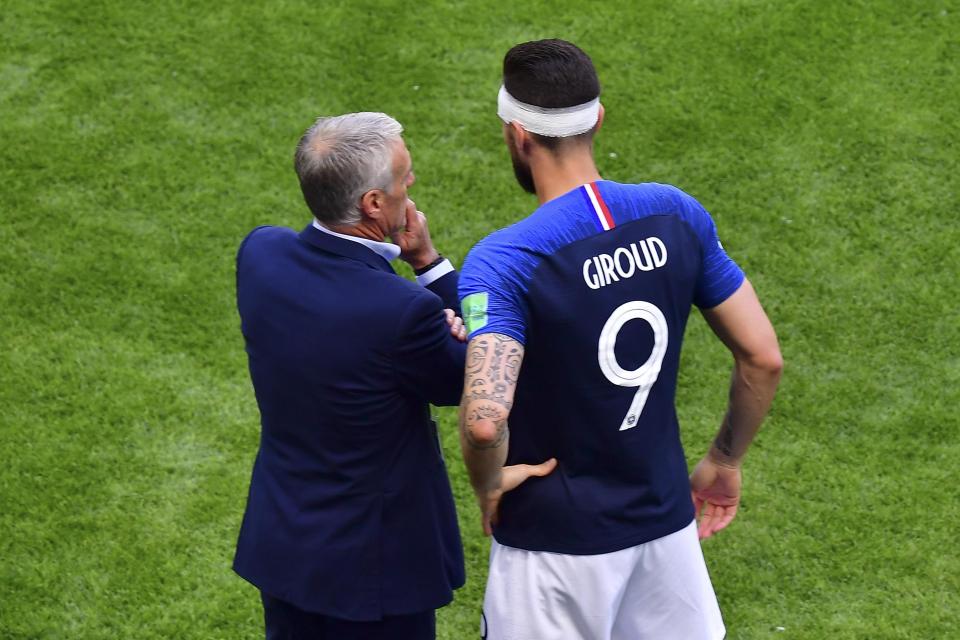 Charismatic Carillo wasn’t having much luck either. While he managed to impress during the opener, Peru was still beaten 1-0 by Denmark. 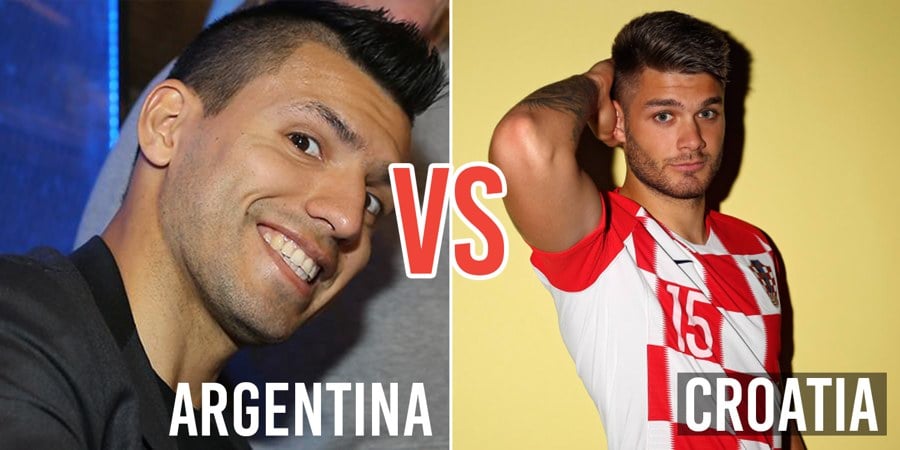 Sergio Aguero has already scored one goal in the World Cup this year.

While poor Messi was being beaten over the head for the Argentina’s failure to beat underdog Iceland, Aguero spoke up for his captain, saying Messi wasn’t to blame.

That’s some heroism to add to the good looks.

We’re really optimistic about this match. Costa Rica’s 20-year-old Ian Smith caused quite a stir when brought in as a substitute in Costa Rica’s warm-up game against England.

Everyone was amused that Costa Rica had the player with the most English-sounding name.

Brazil’s Thiago Silva has had a bumpier football experience — at 20, he nearly died of tuberculosis.

The doctor told him,

If the disease had been discovered a couple of weeks later, you would have died.

At that time, it seemed likely that his football career would end.

Thankfully, the talented player bounced back and is now widely touted as “one of the world’s greatest defenders”. 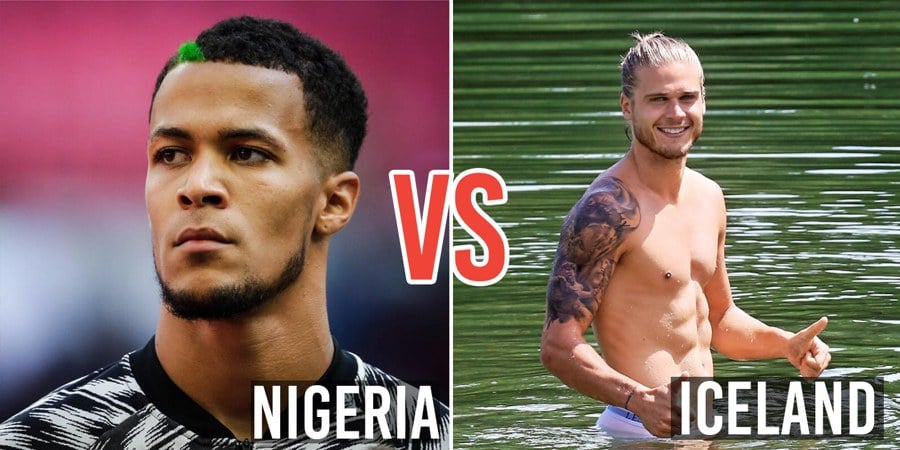 He’s so unbelievably good-looking that his Twitter follower count rose from 30,000 to 362,000 after kicking around in the World Cup for a mere 30 minutes.

Perhaps he could consider a career in a modelling agency instead.

Meanwhile, William from Nigeria may have his mixed heritage to thank for an enviable set of genes.

He’s actually half Dutch and half Nigerian, having grown up near Amsterdam. 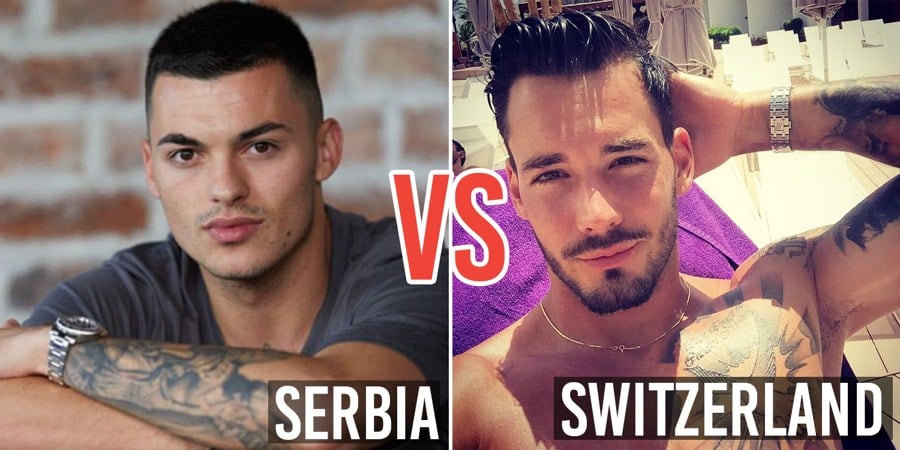 Nemanja is not ‘manja’ like his name suggests, but is a hunky sportsman who takes his warm-ups seriously.

Catch Roman Burki before the match kicks off — trying to get his hands on the ball.

Indeed, he has a quirky pre-match ritual whereby he has to touch the ball. Some people still give him weird looks for this, but his teammates are all used to it. Thorgan Hazard comes from a family of soccer players.

His dad was a semi-professional soccer player while his mom was a top-flight forward.

According to his mother, Thorgan’s older brother “scored goals before his birth thanks to [her]”.

So we have a lot to expect from Hazard, if he is to live up to his name.

Ali Maaloul on the other hand, already has 250k Insta-followers to his name, and remarkably stoic good looks to boot. 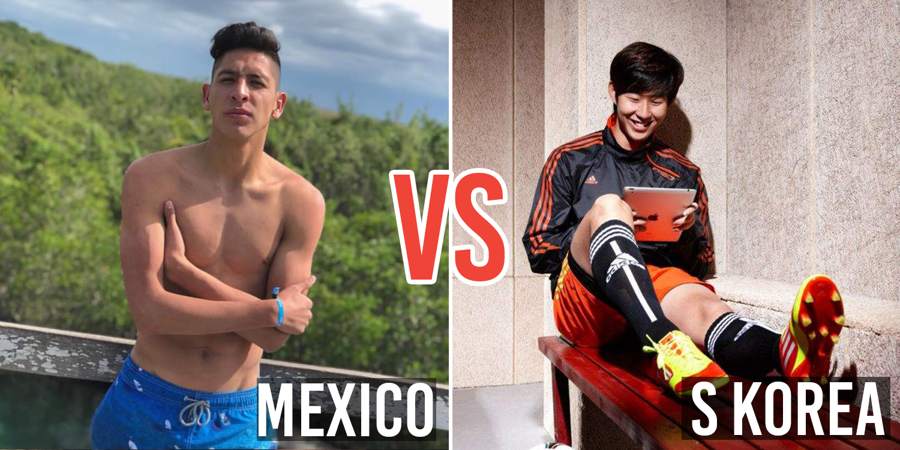 Mexico’s celebrating after its win against Germany. Edson Alvarez would also like you to support Mexico as they will “give you joy”.

For those who’re not convinced – either by his good looks or his team’s sheer talent – they’ll be working hard to convince you otherwise.

Meanwhile, our Korean oppa Min Son must be heartbroken because Sweden beat South Korea in their opening match. We’re not moping though, we’ll still get to see him in action soon. Manuel Neuer is a legendary goalkeeper who’s managed to fend off even the most talented strikers. He’s also known for being a part-time midfielder as he often traipses forward on the pitch to kick off stray balls.

Then again, Mikael Lustig from Sweden has scored multiple endorsements. And still takes time off to update his fans with sweet photos of his beautiful family on Instagram. 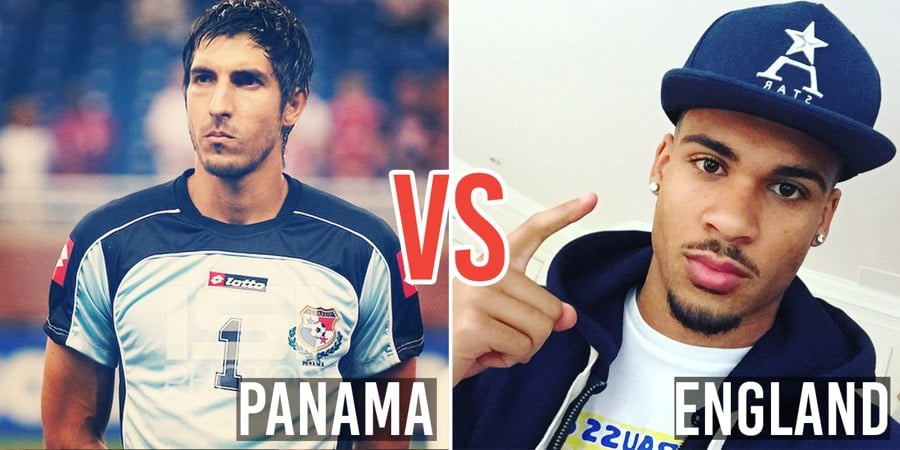 Jamie Penedo, Panama’s sizzling hot goalkeeper, predicted that the World Cup would be a challenge for them.

But he said he was excited to play with the football giants more than anything else.

He’s also one big-hearted guy, with a foundation that gives disadvantaged youth space and equipment to pursue their athletic dreams.

England’s Ruben does have a lot to live up to, seeing that he’s from the same team that birthed the legendary David Beckham.

But of course, he’s already number one in our hearts. Let’s face it, this German boss is really charismatic. You’ll notice that even the cameramen love to capture his reactions.

There’s some added benefit to eye-candying the players.

Your heart will surely race while watching these muscled guys run about the pitches.

Let us know if you think other worthy inclusions should be added to our list in the comments below.