Any mention of Singapore and Food inevitably conjures up visions of a glutton’s paradise before long. From the wok-perfected char kway teow available approximately two minutes from anyone’s house to artisan truffle and porcini that takes two months to save up for, Singapore is the melting pot of the world’s best cuisines. Some go as far as to call it the food capital of the world.

But this is the food-wish granting heaven also has some grisly stories lurking in its underbelly. Most of the time, Singapore is known to be immaculately clean, food hygiene included. But once in awhile, tales of nasty discoveries in kitchens and on plates set even the bravest stomachs churning.

Here are some food horror stories we sniffed up to channel your inner Merlion and get those gag reflexes going. (Read: how to jumpstart those diet plans)

During lunch hour, a customer found a dead rat floating on a buffet tray of salted vegetables in the Chinese restaurant.

The customer, Caron Chan uploaded on Facebook photos of the rotting carcass sitting on a ladle in the vegetable stew. In the post, she wrote, “”Spot the #RAT in the vegetable dish. Taken at Hotpot Culture at Marina Square for the $8.80 porridge buffet with my colleagues for lunch. It was business-as-usual right after removing the dish tray. Enough said.”

The photos went viral on social media and NEA is taking action against the eatery.

Restaurant staff eventually came clean and revealed that the dish was prepared the day before. It was left slightly uncovered overnight so that the food would not go bad.

Two people died and more than 150 patrons fell ill when the famous Rojak Geylang Serai served food with bacterium from raw seafood. The bug somehow got into the cooked food at the stall run by a father-son team. After the food poisoning, the hawker stall was shut down and the owner given the maximum fine and banned from operating another business in the hawker centre.

After the case was closed, his wife and two sons set up a separate stall called ‘Rojak & Mee Siam’. Today, patrons form a queue that stretches from the moment the stall at Geylang Serai opens until they sell out.

A patron discovered a group of five cockroaches scurrying near a piece of fried meat for sale at a foodcourt run by Koufu. He posted the photo of the chicken rice stall on Facebook, prompting NEA to take action.

NEA found that the stall was infested with cockroaches and it was shut down temporarily for cleaning.

Four wedding banquets and one dinner and dance in December led to hundreds falling ill.

443 guests who atteneded the events seprarately at Hotel InterContinental developed symptoms such as diarrhoea, vomiting, and fever after dining at the hotel’s Man Fu Yuan Restaurant.

The restaurant was temporarily suspended and fined $20,000.

A customer found an unidentified insect in one of the snack chain’s sardine puffs. Photos of the puke-inducing dead insect mashed up with other ingredients in the pastry went viral online.

The staff’s response: how many legs did the creepy-crawly have?

They eventually apologised and sent the insect for lab tests.

The boy Shayne, his mother and two-year-old sister consumed food from the Nasi Padang stall and were taken to Bukit Batok Polyclinic the next day.  Shayne eventually died of salmonella septicaemia at the hospital while his sister had salmonella bacteria in her stool samples.

The stall owner was prosecuted and fined.

As many as 26 YOG volunteers were suffered food poisoning after consuming their catered  meals. The volunteers suffered diarrhea while on duty at the triathlon competition at East Coast Park.

2 diners were hospitalised and 12 others fell ill after eating after eating raw oysters, salmon and tuna sashimi at Todai Restaurant in Marina Bay Sands.

11 of them, including the hospitalised, were colleagues who having a department dinner at the restaurant. NEA conducted checks at Todai and found it clean.

The restaurant reimbursed $1,600 for the department dinner and gave each affected diner $100 for medical expenses.

10 pre-schools, 270 pre-school children and 12 teachers were hit with a food poisoning outbreak after eating food supplied for lunch in the schools.

The food catered by Mum’s Kitchen contained bacteria called Salmonella Enteritidis. It was found in the seafood marinara pasta supplied that day.  The supplier’s licence was suspended and it was charged in court. 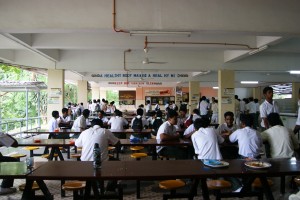 East View Secondary students suffered from food poisoning after eating from the Muslim stall in school. It is not known how many students were affected by the contaminated food, but some had to be hospitalised.  The stall was temporarily closed for cleaning and inspection.

In Singapore, you can have the world on your plate. But every coin has a flip side. Before you have your cake and eat it too, remember that human error is possible even for a country that is strict about cleanliness. As long as customers are careful about what and where they eat, things should usually go to plan. But, fret not if something smells fishy, for we have world class doctors too.