Following the trial of the Kovan double murders, Workers’ Party’s Lee Li Lian has taken to Facebook to share that she had met the younger victim the day before he was killed.

She recounted that she was on her way to meet an LTA officer when a man came up to greet and thank her. The very next day, Lee was shocked to know that the man was the younger Mr Tan Chee Heong, who was allegedly murdered by 34-year-old former senior staff sergeant Iskandar Bin Rahmat.

She added that their encounter might be short-lived, but he left an impression on her and hoped that the family would find closure soon.

On 10 July 2013, the younger Tan’s body was found dislodged after being dragged over 1km under a car from the crime scene to Kovan MRT Station. The older 66-year-old Tan Boon Sin was found dead with stab wounds at his home’s garden.

The former sergeant was charged with two counts of murder after his arrest three days later. The police said Iskandar had been facing financial difficulties since June 2012.

Trial of the Kovan double murders started on Tuesday (20 Oct). 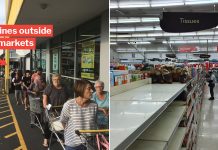