The WP comes to the East Coast

On Sunday (6 Sept), at Simei, the Workers’ Party are holding their first rally in the ward of East Coast. They narrowly lost it four years ago with a vote share of 45%.

I’m going for my second Workers’ Party rally of this elections.

7:00 p.m: The crowd is massive, as ever. Streams – no, crowds – of people are crossing the road. Traffic has slowed considerably.

My friend, who stays in Simei, comments, “I have never seen Simei crowded before.” The narrow streets of Simei aren’t really built to handle people of this amount either — I hear several horns from angry motorists who are probably just trying to get home.

This a huge field — I thought it was similarly-sized, if not bigger, than the Hougang one — and it’s still filling up quickly. There are a few shop tents set up by Workers’ Party members, selling flags, umbrellas, and even the Workers’ Party manifesto.

They are doing brisk business.

7:15 p.m: Several blocks of flats overlook the field – the common corridors are filled to the brim with curious onlookers trying to get a better view. If you happen to stay in these flats, all I can say is, lucky you.

Because if you look outside your flat, you’ll see that there are at least 20 people waiting for the modestly-sized lift to bring them up to the higher levels where they can get a superb birds-eye view of the immense crowd. A once-in-a-lifetime opportunity, if I may call it that. I didn’t have the time to wait for the lift, so I had to make the journey up to the 11th storey by foot.

7:30 p.m: I get back to the field just in time to hear Dennis Tan, the WP candidate for Fengshan SMC, saying that if we put posters of Low Thia Khiang all over Singapore, the WP would probably be asked to take it down.

He is referring, of course, to the numerous posters of Lee Hsien Loong that have sprouted up all over Singapore.

He adds that the PAP have gerrymandered and not given an answer for why Fengshan has suddenly become an SMC, a concern he says residents have shared with him.

“On September 11, vote Workers’ Party to tell the PAP you are tired of their dirty politics!”

7:45 p.m: The entire East Coast lineup will speak next. Daniel Goh reminds us that you cannot give the PAP a blank check, or they will write whatever they want for a 6.9 million population.

Next are Leon Perera, who despite being neither Malay nor Chinese, gamely attempts several sentences in both, and Mohammed Fairoz Shariff, who speaks of the challenges that part-time students face, including his wife, who only recently graduated with a part-time degree in nursing.

8:30 p.m: Last to speak from the East Coast slate is Gerald Giam, who contested here in 2011 and subsequently entered Parliament as a Non-Constituency Member of Parliament. He says that we need to reclaim our right as masters of our own land, not “supporting actors in a movie with a bad script.”

Gerald reminds us of his East Coast lineup, introducing them to the audience once again, and they share a bow on the stage.

8.45 p.m: Punggol East incumbent Lee Li Lian is next and speaks of BTO applicants, homeowners, and divorcees who are unable to get homes.

She says that about 200 applicants have failed three times or more in applying for a BTO. “This only delays family planning,” she adds. 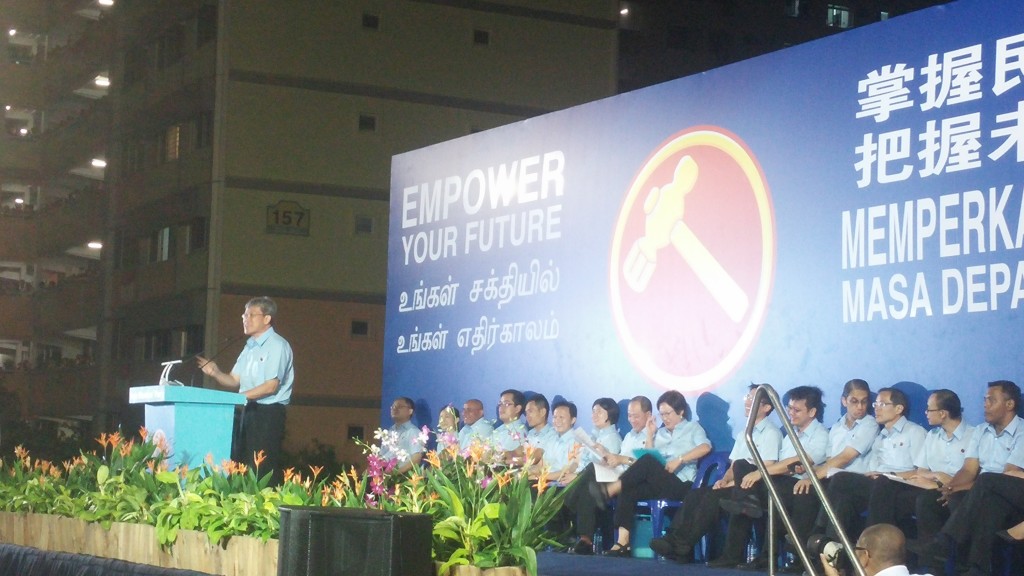 9:00 p.m: Shouts of “Huat Ah!” go up. That can only mean that Png Eng Huat is the next speaker, and he is. He contested in East Coast GRC in 2011, and many remember him from four years ago. He thanks the crowd: “The Workers’ Party have not forgotten your support in East Coast in GE2011! It was amazing!”

He makes a reference to a PAP minister saying that the PAP and Singaporeans share the same values in life. 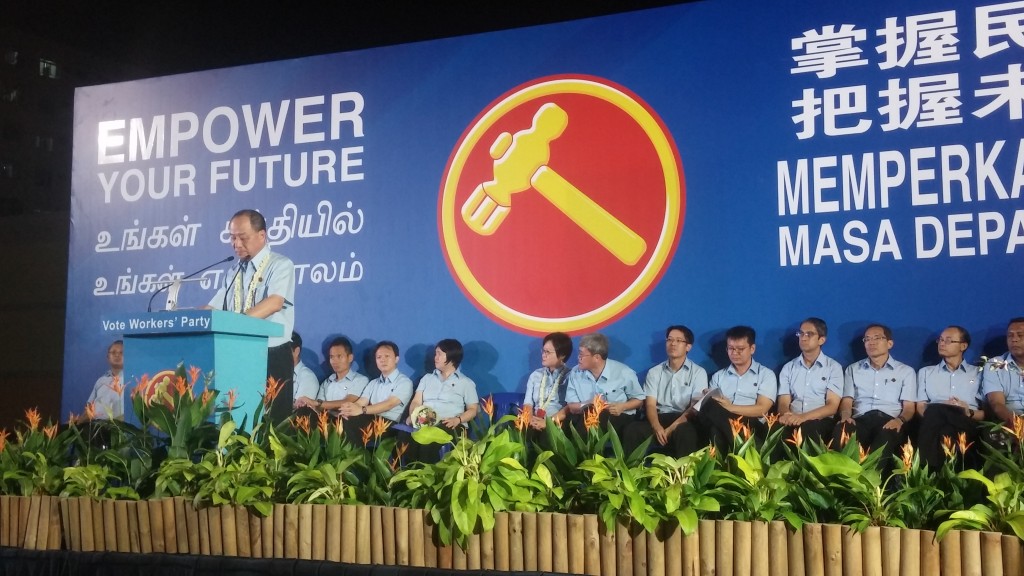 “Good evening, Mr Low!” shouts someone from the crowd. He acknowledges the greeting with a smile and a wave. Speaking in Mandarin, he says that if the key positions in big companies continue to be held by foreigners over Singaporeans, it will be a very serious problem. He’ll be back later to speak in English. 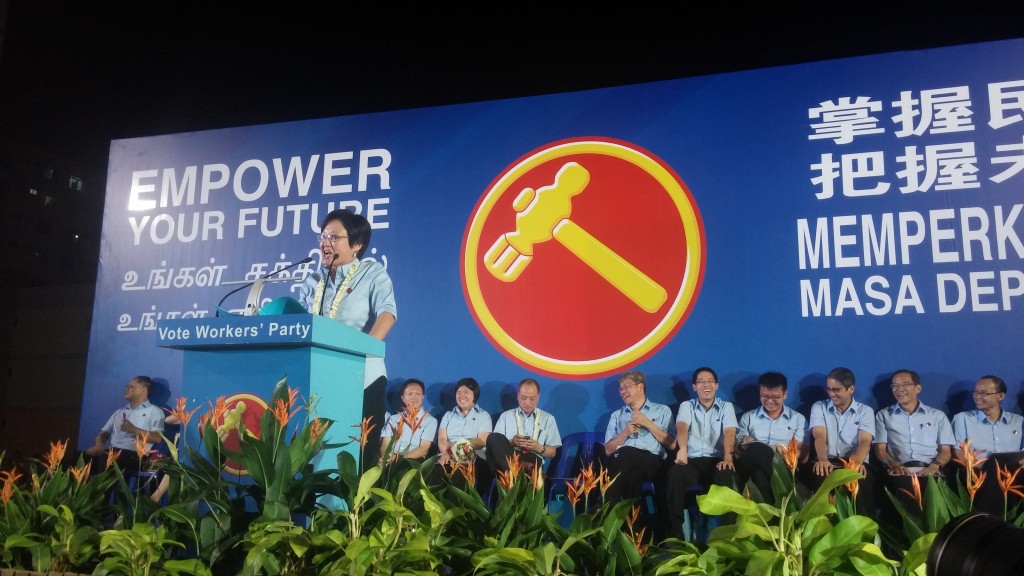 9:30 p.m: Sylvia Lim will speak next. “The future of the Workers’ Party is in the young people behind me! I am 50 and certainly not young.”

“Still young!” Comes a shout from the crowd. She laughs.

To illustrate her point, she asks everyone behind her younger than her (below 50) to please stand up. The entire Workers’ Party slate stands up and shares a wave to the crowd, who applauds them. Of those in attendance, only Png Eng Huat, Yee Jenn Jong, and Low Thia Khiang remain seated. They share a laugh. 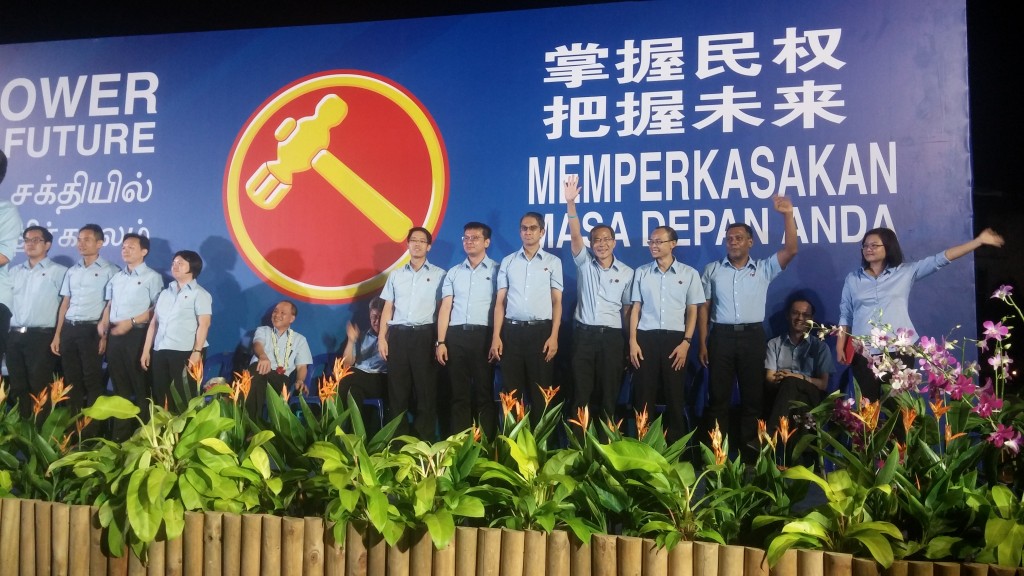 “This is the future of the WP. Please give them your vote!”

She says that many leaders of the PAP continue to stay in power for many terms. “Even our poor former prime minister cannot retire.” She asked voters to cast their vote for young WP candidates so they can “learn the ropes, run town councils, speak in Parliament and deal with the PAP.”

She ended her speech with a rallying call to voters in the east, “At daybreak, the blue sky can first be seen in the East!” 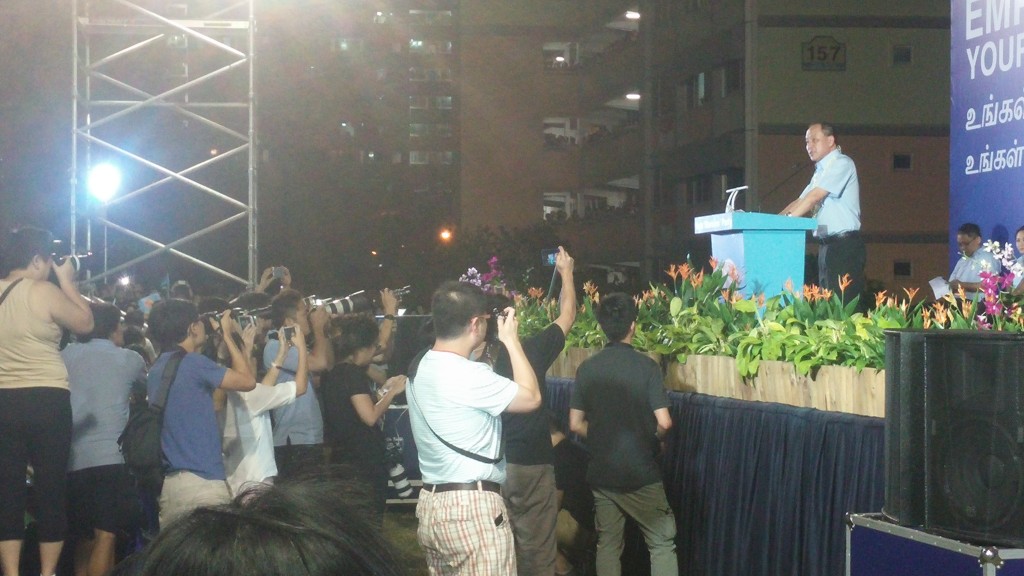 9.45 p.m: The last speaker will be Low Thia Khiang, this time speaking in English. “What is the point of improving in dollars and cents when there is no improvement in our quality of life?” 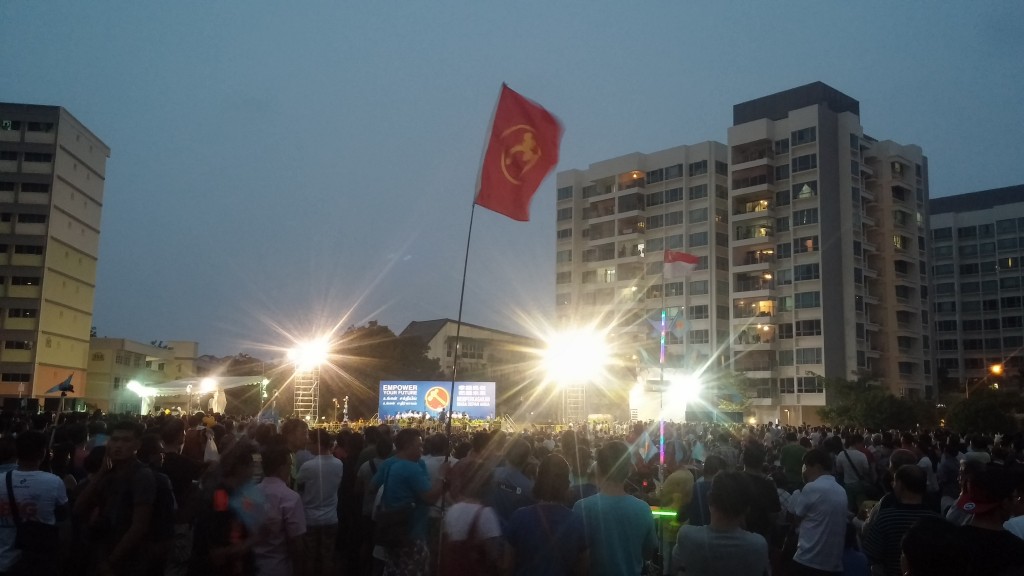 There was nothing particularly new about the Workers’ Party rally at East Coast, but after all, they are the only opposition party who have held a rally every single day since rallies began. It was important to bring their message to the East Coast voters, and they did just that today.

It certainly looks like the WP have identified East Coast as a possible weak point in the white armour, sending all their top candidates that aren’t already holding MP positions into the eastern ward. East Coast is shaping up to be a very close contest and it’s one that Singaporeans should be watching closely this September 11.