National day rally? I think not. 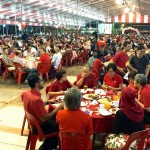 The event was organized by WP Grassroots Committee (WPGC), and was held at Block 814 Hougang Central. Tickets were sold at $45, and 1,800 residents turned up for the dinner to mingle with their MPs and miss the NDR.

Hougang SMC’s Png Eng Huat even put up a special performance for those who attended the dinner.

Looks like PAP doesn’t have a monopoly on guitar-wielding Ministers.

At the end of the night, Ms Sylvia Lim Swee Lian gave a heart-warming toast to Singapore’s progress in the 50 years of independence and hopes for more democratic nation in the future.

“May she enjoy 50 more years of security and peace, and journey towards being a more democratic country.”

Featured Image via The Online Citizen’s Facebook
With reference from The Straits Times, Yahoo Singapore