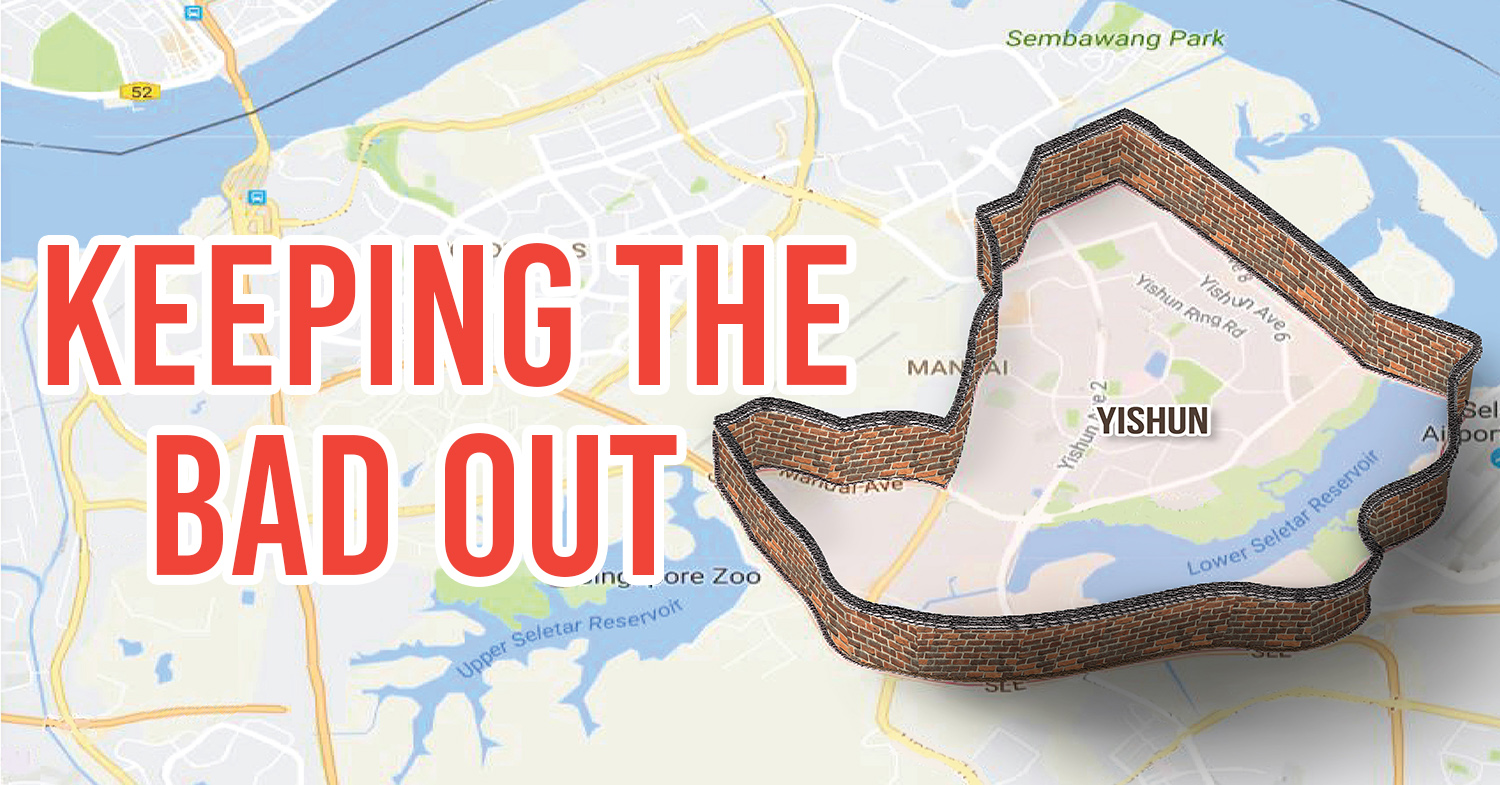 Yishun Make Fun Of It

Well well well, what do we know — Yishun is in the news again! In small, stifling Singapore where nothing interesting ever happens, any glimpse of drama is immediately cast into the public eye, and it seems like the public isn’t ready to let go of Yishun just yet.

With our satirical article poking fun at Yishun and its happenings, followed by Yishun MP Lee Bee Wah defending her sacred territory, the drama never seems to leave Yishun. Ms Lee has nothing to worry about now though — Yishun is the place to live in.

Yes, we’ve managed to make Yishun great again. Here are 10 reasons why Yishun is so great we still need the wall, except it’s to keep all the bad out from the rest of Singapore out.

When Facebook user Farah Ridhwan alerted the public to a mysterious man going around Yishun flats asking people to give him their children, she created the perfect opportunity for Yishun parents to have a teaching moment with their children.

Just think of how they can now role play the whole do-not-open-your-door-to-a-stranger scene with their children, right there. It’s the ultimate story parents can use to keep kids well-behaved: “Keep quiet, or I’ll give you away to that man!”

Better than the empty threat of putting chilli padi in your mouth — something isn’t really a punishment for many chilli-loving Singapore kids.

With people like the children-loving man going around, we’re sure the kids of Yishun will grow up to be vigilant citizens of Singapore. Thank you for doing our nation a service, Yishun.

Residents of Yishun don’t need to waste money on plumbers/repairmen, because they are that good at repairing their own flats.

With tiles randomly collapsing every now and then, it is impossible to not become an experienced repairman in no time. Save money and a chance to learn additional skills? We sure aren’t passing that up — see you in Yishun!

When floods are a sudden but common occurrence, learning swimming is your only shot at survival in this town.

The enthusiastic monitor lizard trying to enter the lift in Yishun was no doubt attempting to get to would-be complaining residents before they even get a chance to complain. Dead men don’t complain.

Seniors, remember the good old kampong days when having an actual toilet bowl was a luxury and seeing and smelling sewage was the norm?

Those who feel nostalgic for those days should live in Yishun. With sewage pipes bursting out of the blue, spewing faeces and urine all over the streets and preventing the use of toilets, we promise the most authentic kampung experience in Yishun.

If you’ve wondered whether your precious smartphone can stand the test of time, never fear, “Spoon Man” is here, in Yishun.

Yup, witness that virility and form he displays when throwing that phone on the floor. If your phone can withstand that, it can withstand anything. And if it doesn’t, hey at least you can make use of your phone insurance!

7. Free Fruits, Only If You Notice Them

Apparently Yishunites like to grow watermelons on high floors. It must add to the thrill of walking around your HDB void deck.

Instead of Jack and the beanstalk though, it’s the Singaporean version — Doris and her watermelon stalk. Except Doris was not even aware she owned a watermelon stalk, much less attempt to climb it.

Regardless, she expressed great thanks to her neighbour who informed her of her gigantic watermelon stalk.

No more trips to the supermarket for fruits if you live in Yishun — asking Doris for a watermelon does the trick nicely.

But don’t ask what happens to the unfortunate passer-by walking below when the watermelon decides to detach from its stem and plunge several stories down.

8. Live In A Real-Life Action Movie

Miss the days of marathoning the Mission Impossible series? Well, live in Yishun and you might just get to watch the series unfold in front of your very eyes.

It doesn’t get better than this in boring Singapore, when a fleeing drug offender used parkour to enter his neighbour’s flat and hold the tenants hostage.

Really, the only thing missing is the Mission Impossible theme song, which we’ll let your imagination fill in.

9. Banks Are Safe From Robbers

Yishun banks are so safe that they somehow cause would-be robbers to have a change of heart.

One potential robber of a bank in Yishun was so considerate that he planned a crime, only to be too nice to carry it out.

With such great “anti-theft” measures that don’t even cost a cent, be assured that your cash is safe in Yishun.

It can sure get tiring having to walk all the way from the roadside to your void deck after getting out of a cab.

This taxi driver must have felt his passenger’s pain, so he decided to make things easier for him — he drove all the way into void deck.

Talk about going the extra mile for customers:

Despite the fun we get out of making Yishun the butt of our jokes, let’s remember that Yishun is made up of Singaporeans who are equally shocked at the plethora of incidents that took the town by storm in recent years.

Ms Lee Bee Wah said it best on her Facebook page, after The Straits Times asked her about the town’s infamy:

As we get caught up in the whirlwind of negative Yishun news, we just wanted to remind the public that a ton of positive things happen in Yishun too, just that we may not notice them.

For example, it has kids rushing to the aid of car accident victims, a pao shop owner who gives shelter to disadvantaged kids and a foreign worker who shows gratitude by building a shoe rack for a family who gave him food and drinks.

So Yishun residents should take heart — better to be well-known than boring.