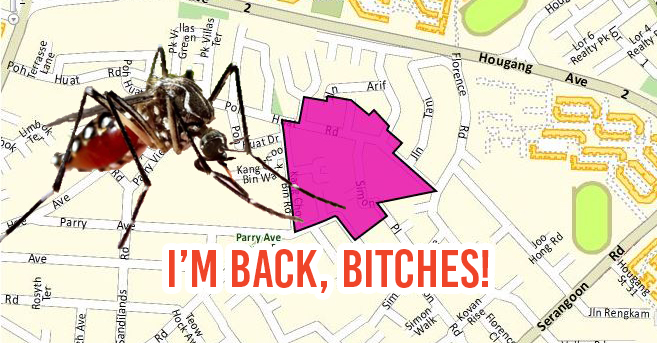 Just as the Zika virus appeared to be dying out, it decided to resurface to torment us again.

The first Zika cluster of 2017 has been reported in Simon Place in Hougang.

According to The Straits Times, two locally transmitted cases of the Zika virus have been confirmed in Simon Place on March 28, with both residents originating from the same household.

A cluster is formed when there are 2 reported cases within 150m of each other in a 14 day period.

Here’s an outline of the area in Hougang that has been declared an active Zika cluster: 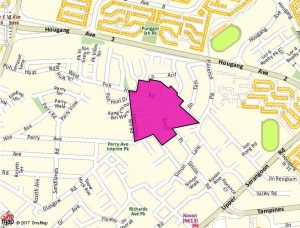 Since the turn of the year, there have been six other isolated cases. The National Environment Agency (NEA) has heightened vector control operations and checks in a bid to stamp out the virus.

Zika first infiltrated Singapore on May 7, 2016 when a 48-year-old male Permanent Resident returned from Brazil with the virus.

But it was not until August 27, 2017 that the first case of locally transmitted Zika virus was reported. A 47-year-old Malaysian residing in Singapore developed rashes, fever and conjunctivitis — symptoms of the Zika virus.

She tested positive for Zika at Tan Tock Seng Hospital.

By the end of 2016 a total of 458 Zika cases were recorded in Singapore, reported Today. Majority of the cases were reported in September, with the number of cases decreasing to 12 in November and 4 in December.

Zika is spread through the bite of infected Aedes mosquitoes, the same species that spread Dengue Fever.

Symptoms of the virus are as such: 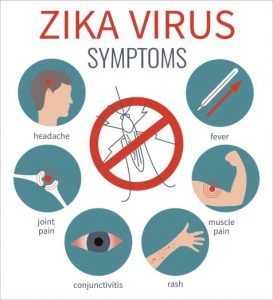 While Zika is generally a mild illness — only 1 in 5 infected display symptoms, the virus spreads swiftly with almost nobody immune to it.

However, there are concerns regarding its effect on pregnancy. During the first 3 months of pregnancy, infected pregnant women face a 13% chance of developing a fetus with microcephaly — a rare brain defect.

Thankfully, everyone can do their part in the war against Zika. 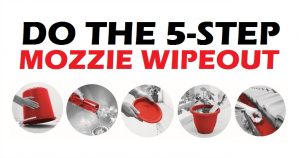 Just be conscientious in carrying out NEA’s 5-step Mozzie Wipeout to keep these pests at bay.

It’s been about 4 months into 2017 and the Zika situation has been largely kept under control.

The emergence of a new cluster might set alarm bells ringing, but as long as each and everyone of us does our part, we can nip the problem in the bud before it threatens to implode on us.