If driving was made as inconvenient as possible, would you still drive?

On 5 Jan, Wong Boon Hong wrote a letter to TODAY’s forum section in response to the article “Use flat rates, fare caps in push for a car-lite society”. In the piece, he responded to the proposal of using fare caps and flat rates to charge commuters, saying such a policy would make public transport unattractive.

Instead, he puts forward a provocative solution.

Making it inconvenient to drive

Mr Wong suggests we make driving an inconvenience and frustrating experience, thus deterring people from driving and move towards a car-lite society.

To achieve a car-lite society, driving must be made inconvenient or even a frustrating experience. This would be more effective than making cars unaffordable or public transport more affordable.

He gave examples of how to make driving inconvenient, such as decreasing the parking lots, having more Electronic Road Pricing gantries, and reducing the number of lanes.

Citing Japan’s transport system, he justifies that inconvenience in driving a car results in commuters taking public transport as an alternative.

Netizens respond with flames and no mercy

Of course, netizens weren’t pleased with that idea.

The responses include personal attacks calling Mr Wong out.

Others have started to insult his intelligence, taking his solution and rather confusingly used healthcare as an analogy.

Meanwhile, this guy keeps it short and sweet.

Luckily, there were some people offering constructive comments without ripping Wong’s solution into shreds. 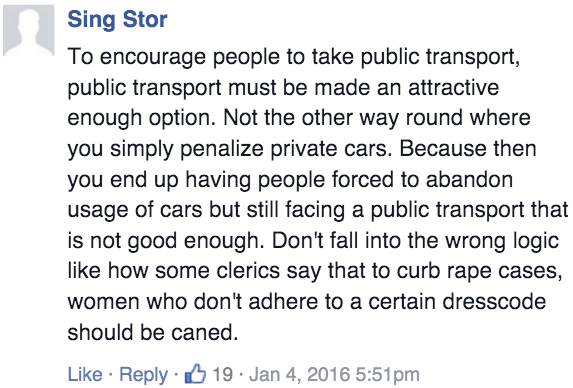 Perhaps a more balanced view would have fared better as an opinion piece.

Featured image via TODAY
With reference to TODAY