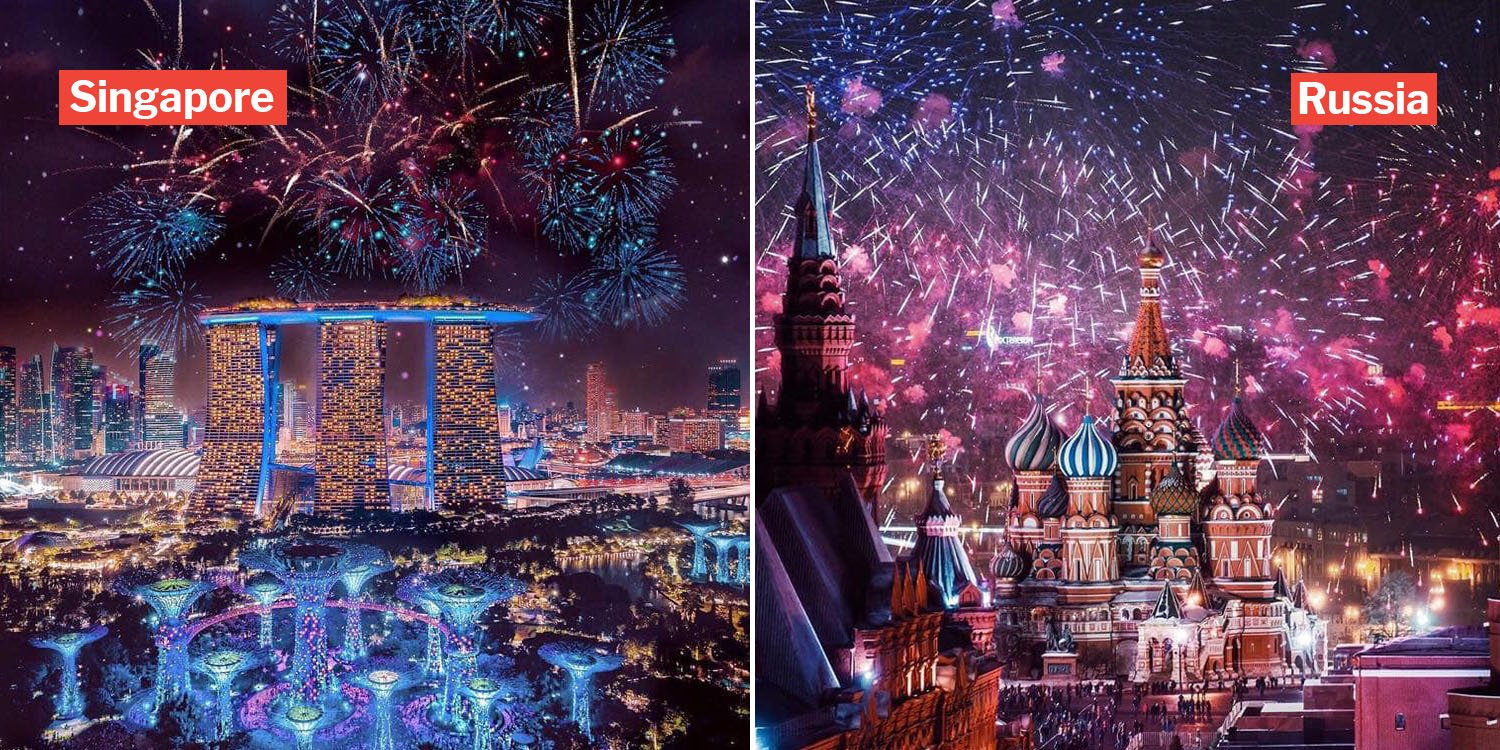 If you’re one of the lucky ones who got to witness this year’s fireworks in Singapore, you would know how spectacular it was.

Choreographed alongside 500 drones and entertaining music performances, we’re sure the New Year’s Eve fireworks this time made many of our jaws drop.

Evidencing that, Facebook group LusTravels curated a list New Year’s Eve fireworks around the world and Singapore made it to the top 10.

Without further ado, here’s the top 10 most spectacular fireworks displays in cities all over the world.

Known for its beautiful skyline and architecture, Marina Bay is where major events like National Day and New Year’s countdown is held.

And in the picture posted on LusTravels, beautiful sets of fireworks are seen exploding in the sky against the stunning skyline of Marina Bay Sands and Gardens By The Bay.

Coming in second is the Savior on the Spilled Blood church located in St Petersburg, Russia.

With specs of pink and red fireworks illuminating the sky against the vibrant church, this view sure looks like it came straight out of a Disney movie.

And in third place is the fireworks display in Berlin, Germany lighting up the sky with a variety of spectacular designs.

Exploding against dull-coloured buildings, this fireworks display has no doubt become the star of the show.

When asked about the most iconic building in the world, many of us will surely be reminded of the Eiffel Tower in Paris.

And yes, there were fireworks there as well. Bursting into different shapes and sizes against the Paris skyline, this fireworks display looked absolutely stunning.

Plus, the hints of red in the fireworks managed to add the extra pop of colour to the somewhat yellow-looking background.

Coming in 5th is the tallest skyscraper in the world, the Burj Khalifa in Dubai.

For the oil-rich country, the extravagant display of fireworks does not come as any surprise. And because the skyscraper looked dull and dark-coloured, the colourful fireworks display managed to stand out beautifully in the picture.

And in 6th place, we have Moscow. The fireworks here were set off against castle-like buildings, creating a somewhat royal feel. Plus, the colours of the buildings and fireworks complemented each other perfectly.

Next up, the fireworks displays at Quebec City, Canada.

These fireworks are not as elaborate as the ones listed above, but if minimalism is up your alley, then you will love this picture.

But if you’re more into vibrant colours, you’ll definitely love the fireworks in Budapest, Hungary.

Each burst of firework illuminates the sky with a different colour, making the entire view incredibly stunning.

The photo taken of the fireworks at Prague, capital city of Czech Republic, was framed in a way that makes you feel like you’re watching the fireworks from a window.

Just imagine standing there and as you look out the window, being greeted by a stunning view of the city and fireworks bursting in the sky. How beautiful.

Last but not least, here’s the fireworks display in Taipei, Taiwan.

The fireworks seemingly coming out of the iconic Taipei 101 makes the entire scene look absolutely amazing.

Standing at 508-metres tall, one can only imagine how spectacular the skyscraper looks along with the fireworks.

Wishing you a great year ahead!

Now that we’re already in the new year, MS News wishes everyone a fruitful year ahead. May all your new year resolutions come to pass this year!

If you have any other beautiful pictures of this year’s fireworks, don’t hesitate to share them in the comments below.