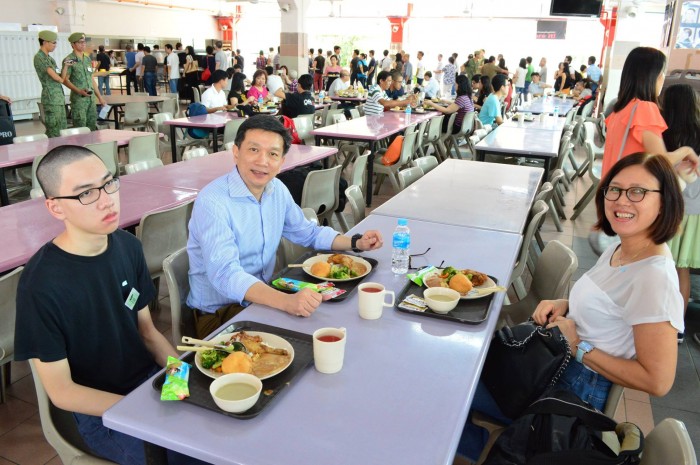 *Update: It seems that the picture has since been deleted by BMTC Facebook account, but that’s okay cause we’ve already downloaded it.

On 5 Jan, the Basic Military Training Centre posted a photo on Facebook, of a recruit lunching together with his parents which went viral. The young man’s sian expression captured the attention of netizens and is going viral.

This picture was taken during the direct enlistment of the 01/16 batch of Basic Military Training (BMT) for National Service (NS).

In the photo, the recruit with his shaven head and black spectacles, sports a black T-shirt stares blankly into space. In contrast, his parents are beaming from ear-to-ear. His mother appears especially delighted, in contrast to her son who is clearly having an existential crisis.

What do netizens have to say about this guy’s expression?

Netizens have took a keen interest on this guy’s  sian expression and have responded enthusiastically to the post.

This netizen hits the nail on the head.

Others have speculated why the parents are looking especially jovial.

This commentator believes that the parents would be happy to be saving money on groceries when he enters NS.

This guy seems to know what life in BMT would be.

Others go with the good old MasterCard joke.

When this guy finally books out on on 15 Jan, he’ll be more than just a recruit.

He will be a minor celebrity.