Must Share News – Independent News For Singaporeans
Home People Tan Chuan-Jin Proves That He Is The Master Of Troll With One... 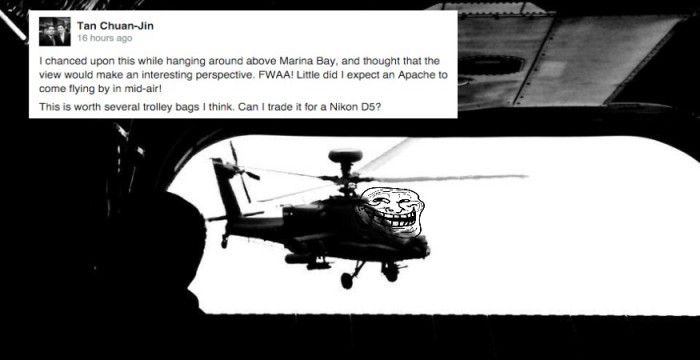 Who knew that Minister Tan Chuan-Jin had a funny bone?

Minister of Social and Family Development, Tan Chuan Jin, was on a Chinook ride near Marina Bay when he caught a glimpse of an Apache from the rear ramp opening of the Chinook.

He quickly whipped up his phone and took a majestic picture of the Apache.

And now, he is on his way to winning the trolley bag from Nikon. Probably.

His Facebook post recounts his brief encounter with the Apache and includes his photo of the helicopter.

Tan recalled that he was thinking that the Marina Bay view was a great angle and by coincidence an Apache came flying by, thus he managed to capture such a magnificent shot.

His comments on the photo

The Minister claimed that he was photobombed by the helicopter and accidently took such a good shot which was thus deserving of a prize.

He was referring the the Nikon photoshop fail — in which Nikon gave the first prize to a photoshopped photo.

This is worth several trolley bags I think. Can I trade it for a Nikon D5?

Coincidentally, rival photography company Canon was also encouraging Netizens to share their airplane shots with “extra points for creative use of photo editing software to put planes in surprising places”.

So our Minister decided to share his as well.

Unfortunately, helicopters are quite different from airplanes.

This netizen was interested in how the minister managed to capture a shot.

Tan replied jokingly that the secret to his fabulous shot was to “wait long long”.

He then added that the the trick to taking such shots was to anticipate them and prepare in advance. He also implied that taking more shots would help to get a better photo. 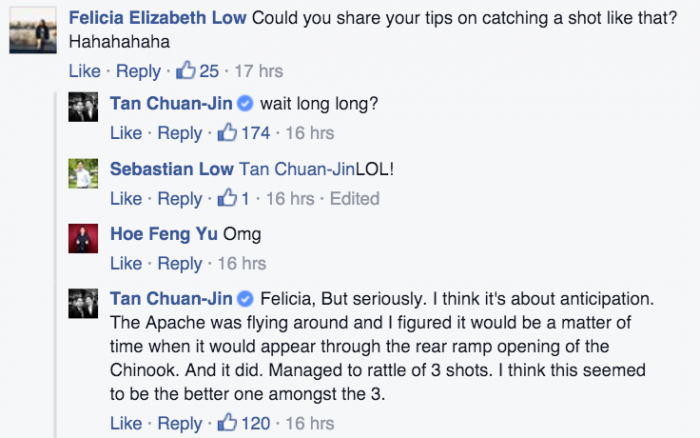 Another netizen echoed a question asked to the “winner” in the Nikon fail saga adding a touch of humor.

Our minister replied cheekily, saying that he got lucky and did not wait long to capture the photo.

This guy is extremely excited about the Apache photobombing Tan’s photo.

Tan concurred and played along saying that it would looked better without the helicopter in the photo.

The MSF minister managed to strike a chord with citizens using his sense of humor.

However, we are still not convinced if the shot was photoshopped or not.

Tan said that the Apache photo was “taken through the rear ramp opening of a Chinook” and “[they] were carrying out a recce of the flight display during NDP 2009”.

What do you guys think? 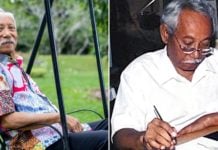 Father Of S’pore Batik Passes Away At 81, Made His Mark In Museums Globally 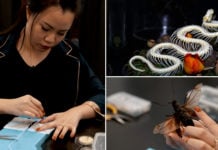 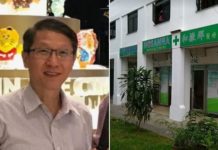 S’pore Doctor Passes Away From Covid-19, He Was Well-Loved By MacPherson Residents