She works out roughly 5 times a week.

With 2023 fast approaching, some of us probably have working out as part of our new year’s resolution. But sticking to stringent exercise regimes can be tough.

If you’re one of those who find it notoriously difficult to drag yourselves to the gym, you might want to look to this woman for inspiration.

So sorry i haven’t been posting for awhile. Life has been hectic and my priorities changed for awhile. Been focusing on my cut and after every training session, i just wanted to go home and sleep. I’ll be back with my dancing videos soon (no promises). So don’t mind me posting my progression videos 🤣🙏🏽 #fyp #singapore #StillAwkward #gym #bodybuilding

A 25-year-old Singaporean bodybuilder who goes by @macz3us on TikTok has been impressing netizens with her bodybuilding gains recently.

Posting to TikTok on 28 Nov, the woman shared a video clip of her bodybuilding gains.

She explained that she had been away for a while as life had been “hectic” and she had to focus on her priorities.

Having eventually returned to the app, she will be sharing more videos of her fitness progression. And in return, we’re all better off for it. 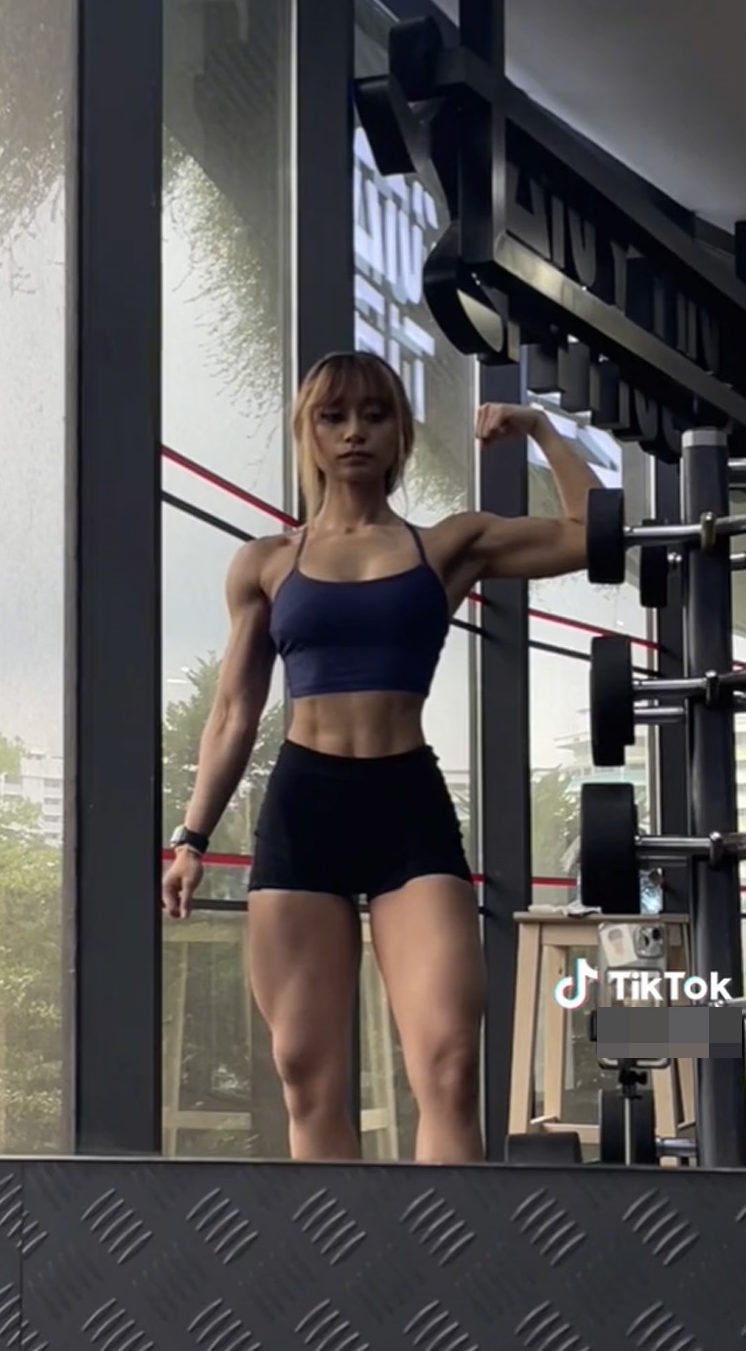 In the footage itself, she flexes her arm in front of the camera, showing off her impressive bicep.

Needless to say, with the video reaching one million views and counting, netizens appreciated her sharing. TikTok users flocked to the comments, expressing their amazement at her physique.

Some users were perhaps a little too enthusiastic in their appreciation.

However, others were also rather impressed by the woman’s bodybuilding gains.

Despite being just 11 seconds, her video inspired a few users to begin working out.

A couple of netizens also requested that she post her workout routine. While she has not yet done so, it goes without question that it must have involved a ton of effort.

Across multiple TikTok videos, she shared that her fitness journey has been at least seven years in the making, with ‘before’ photos showing her looking visibly different. In response to queries from MS News, she confirmed that she began her fitness journey sometime in 2015 or 2016.

Her figure now is thanks to a lot of hard work, as she trains roughly five times a week despite her busy schedule.

The 25-year-old, who prefers to go by ‘S’, told MS News that she’s a preschool teacher who’s been teaching for almost five years.

Knowing how demanding the line of work can be, her ability to juggle her career with her fitness aspirations becomes all the more inspiring.

Focusing on your goals is important

When asked what first inspired her fitness journey, S told MS News that she was often teased for being the ‘least attractive’ girl in her secondary school class.

But her ‘bully’ who eventually became her best friend, along with her other close friends and poly mates, later motivated her to start working on her fitness.

What began as regular exercises then turned into a lifestyle which required discipline as she committed to a workout regime that she has been adhering to for the past few years.

Having clear goals and seeing the progress she has made thus far keeps S going, as she wishes to keep working on herself.

Once a beginner herself, S advises others who want to start their fitness journeys to not be afraid to approach trainers in the gym if they’re unsure about how to use the machines.

They can even share their goals with the trainers, whom she says are usually nice and willing to help out.

Going to the gym with friends who have the same mindset helps too, as they’ll be a great support system in your fitness journey.

Reassuring everyone who may be hesitant, S says,

Focus on your goal. And yes, sacrifices have to be made, but it’ll all be worth it! Everyone starts somewhere!

Kudos for her amazing achievements

Seeing her achievements is one thing, but we don’t know half of the hard work that likely went into it.

Kudos to S for sticking diligently to her workout routine and letting the rest of us appreciate the results.

Hopefully, this will be inspiration enough for us to avoid overindulging in Christmas treats and get to work on our own fitness as well.

Featured image adapted from @macz3us on TikTok and courtesy of S.