The husband fell while hanging clothes & his wife passed away shortly after.

At around 10.17am on Wednesday (20 Aug), tragedy struck an elderly couple who lived in a 10th floor unit of a HDB flat in Toa Payoh.

An 84-year-old man reportedly fell over the ledge while hanging out clothes to dry, and his 70-year-old wife suffered from a fatal heart attack upon seeing her husband’s body. She was sent to the hospital shortly after, but sadly passed away on the same day. The couple was identified as Mr Huang Xingwei, and Ms Xue Pingxin, who both lived in Toa Payoh East with their second daughter, reports Lianhe Zaobao.

Neighbours heard something “falling from the 10th floor”

Their neighbour described the heart-wrenching incident that befell the couple that fateful morning.

The 86-year-old retiree claimed she heard something falling from the upper floor, and assumed they were bamboo poles that “accidentally fell off the building”.

But her grandson alerted her to the reality of the situation — he had glimpsed an old man falling from the building. She glanced out of the window and saw the tragic scene of the elderly man’s body lying on the ground floor, and immediately told her grandson to call the police.

Elderly wife passed away shortly after

Another neighbour named Mira said that she observed the Singapore Civil Defence Force (SCDF) enter the 10th floor unit where the couple lived.

She witnessed SCDF personnel carrying an unconscious lady out of house, while the medical staff carried out cardiopulmonary resuscitation on the side — before bringing her to the hospital.

This added to her belief that Ms Xue had suffered the heart attack after witnessing her beloved husband’s fall to his death.

The elderly couple was a friendly pair & “good neighbours” to all

Perhaps the most tragic loss of all, will be the void that will be left in the community with the elderly couple’s passing.

Their neighbours remember them as “affectionate and friendly” people. They also recall how the husband appeared fit for his age, and that he “rode a bicycle” every morning. 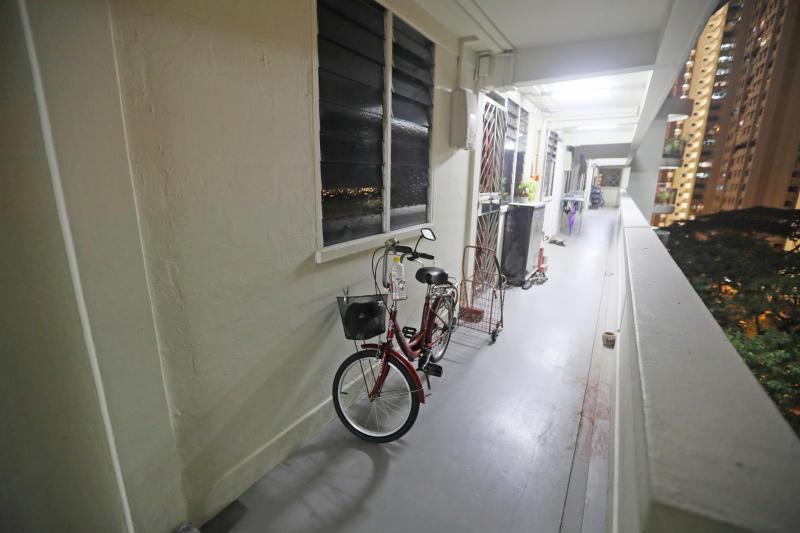 As for his wife, she used to run a childcare centre in Sembawang, about 30 years ago. The centre was later sold in 1990, but eventually closed by 1992, reports Lianhe Zaobao.

Since then, her health has deteriorated and she underwent 2 “abdominal operations”.

That still never stopped her from heading to the market every morning to shop for groceries.

Most of their neighbours share that they are still saddened by the shocking news of their sudden passing. Their next-of-kin, 2 daughters and a son, were also described to have broken down in tears upon knowing of their parents’ fate.

Police are investigating the “unnatural death”

Police have confirmed that they received the report and are investigating the unnatural death of an 84-year-old man.

As for SCDF, they received a distress call at around 11.25am, and reportedly sent one person to Tan Tock Seng hospital to receive treatment.

Netizens hope they are reunited in the afterlife

Netizens have also shared their condolences with the family.

Some believe it wasn’t a coincidence that they passed away on the same day, wishing the companions a safe journey to the afterlife.

Others hoped that Singaporeans will be careful when hanging out clothes to dry in older apartments, as it isn’t an “easy” task.

A netizen also pointed out that HDB can consider upgrading older estates, to ensure that there are “safer clothes-hanging” features in place.

Our heartfelt condolences to the family

The unexpected tragedy which befell this family who lived in Toa Payoh has inevitably struck a chord with many readers who hope that the couple will be reunited in the afterlife.

As for the rest of us, it is a timely reminder to treasure our time on this earth and to always be careful while going about our daily lives.

Our condolences to the family and the couples’ loved ones, our hearts are with you in this difficult time.