Must Share News – Independent News For Singaporeans
Home Current Affairs Yet Another NSF Plunges To His Death, Second Case In 3 Days 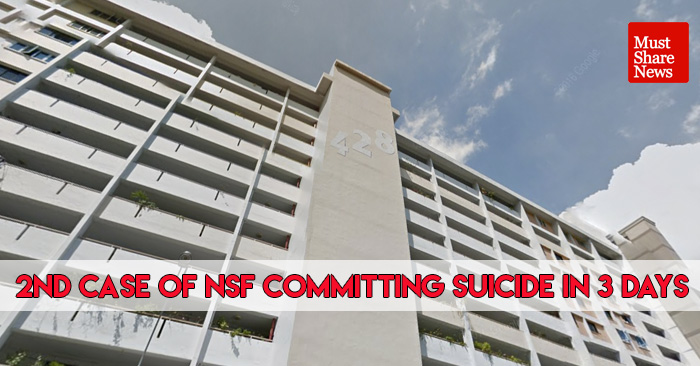 Yesterday (22 Feb), Lianhe Wanbao reported the death of a 19-year-old NSF who jumped from HDB block 428 at Clementi Ave 3. This tragedy took place on 21 Feb, and a neighbour found the NSF lying in a pool of blood at around 11.30pm.

The Singaporean Permanent Resident was from the Philippines, and allegedly took the plunge after an argument with his younger brother.

A friend of the deceased revealed that he had been emotional the night before his death, and alluded to the fight the youth had with his brother.

However, the deceased’s mother said that he did not exhibit any unusual behaviour on that fateful night, and was shocked by his sudden death.

Neighbours recounted that they spotted the teen lying dead at the foot of the block, with a middle-aged man hugging his body and grieving.

This suicide case is the second in a span of three days. On 19 Feb, Singapore Civil Defence Force (SCDF) recruit Edwin Ong Koon Chwee took his life by jumping from his bunk at the 4th storey of the National Service Training Institute.

In August last year, Recruit Shek Salmin committed suicide as he could not handle the stress he faced due to his family situation, which was made worse by his camp superior who did not understand his difficulty.

Featured image via Google Maps
With reference to Lianhe Wanbao, All Singapore Stuff