This morning (19 Feb), Singapore Civil Defence Force (SCDF) recruit Edwin Ong Koon Chwee plunged to his death from his bunk at the 4th storey of the National Service Training Institute. He was pronounced dead at around 3 – 4am.

SCDF has since taken to Facebook express their condolences:

According to The Online Citizen, the PES B recruit was from the 139th intake of the Charlie company and did not have any psychiatric history. Further, he had just enlisted into SCDF on Tuesday (16 Feb) this week.

Before this incident, Edwin posted a wordy message on Facebook dedicated to his loved ones: 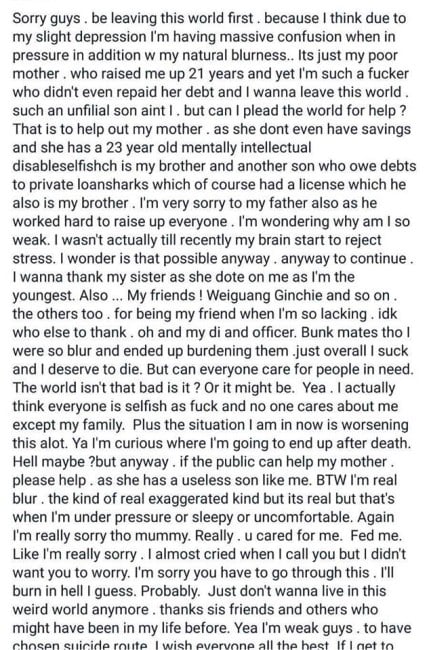 Not the first case of an SCDF NSF committing suicide

On 17 Aug last year (2015), Recruit Shek Salmin ended his life after sending a goodbye message to one of his close friends explaining why he chose to do so.

He was overwhelmed by the stress he faced due to his family situation, which was made worse by his superior at camp who did not understand his predicament.

More could be done

Although helplines are available for NSFs, superiors should pay more attention to them. In this case, if someone had noticed that Edwin needed help, this whole tragedy could have perhaps been averted.

Heavy Rain On 25 May Causes Ponding In Toa Payoh, No Flash Floods Reported