It’s the time of the year again

Ah, a year has flown by since we watched Jeanette Aw do a Jennifer Lawrence at the Star Awards 2015. This year’s star-studded event was held at the new headquarters at One-North.

The glitzy affair gathered all our favourite Mediacorp actors and actresses under one roof, and here are 10 things you missed if you didn’t watch TV yesterday:

The A-lister was nominated a grand total of seven times for the award of Best Actress, but fell short of clinching the award every time. This year, Aw finally managed to bag the award in her convincing role as depressed Zhao Fei Er in The Dream Makers 2.

Many of her colleagues were visibly happy for her, including fellow Best Actress nominee Zoe Tay who embraced her, and Huang Biren who gave her a peck on the cheek. 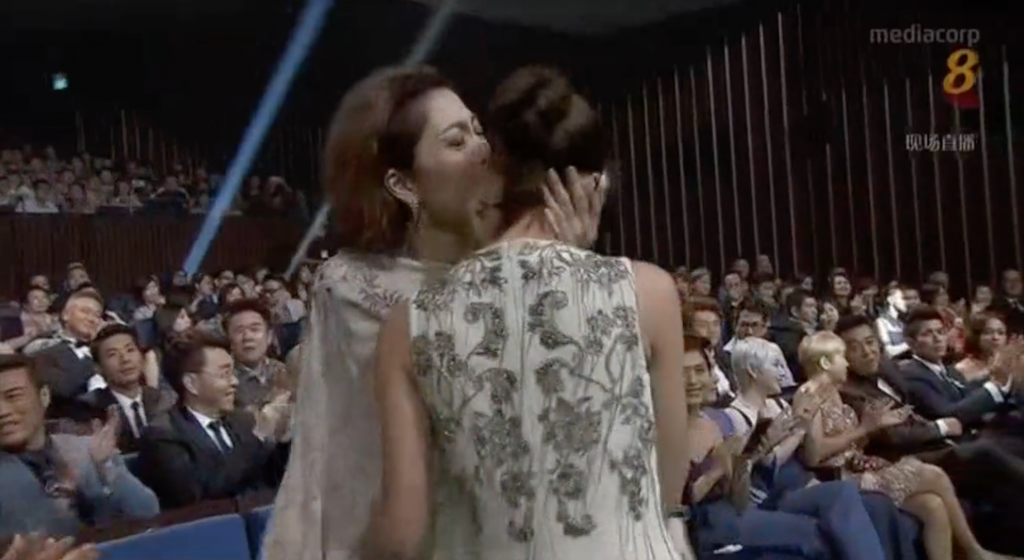 During her thank you speech, the actress shared that a senior Mediacorp executive evaluated her chances of getting the Best Actress award as next to none, and said this in a text message:

Do you think the time has come for Jeanette Aw to bag the top prize? Fat hope. She was nominated in similar roles in the past and didn’t win.

Fortunately, it was Jeanette Aw who had the last laugh after being crowned Best Actress.

Looks like luck has rubbed off on Jeanette Aw’s The Dream Makers 2 co-star Qi Yuwu as well, who won the Best Actor award. He also bagged the Favourite Onscreen Couple award with Jeanette Aw, but offscreen, the more-jovial-after-marriage 715 and Joanne Peh made a cute couple. 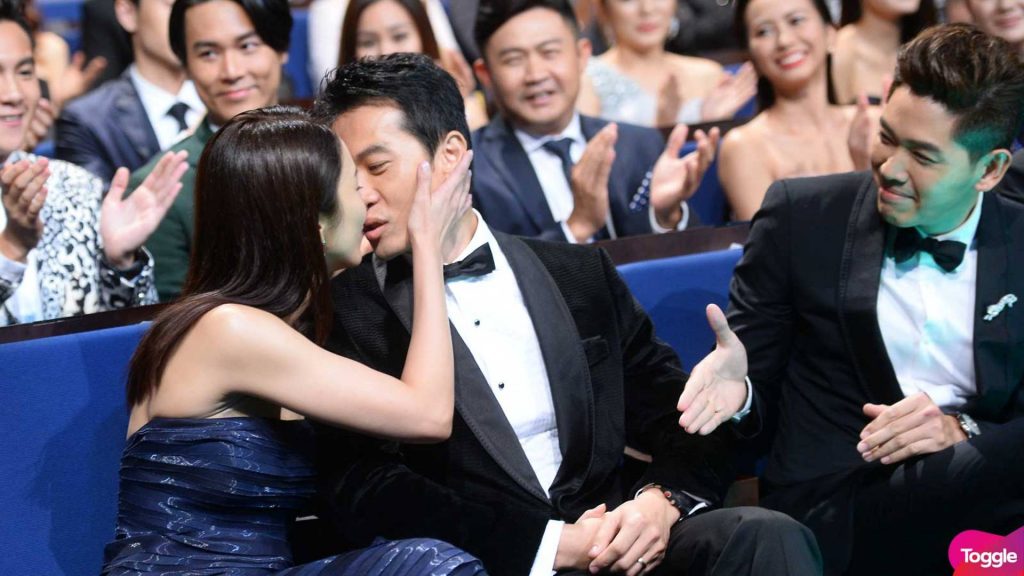 After winning the Best Newcomer award last year, the duke has gone on to receive his first Top 10 Most Popular Male Artistes award following his first nomination in the category.

The child actor, who has been mistaken for I Not Stupid‘s Shawn Lee too many a times, is definitely carving a name for himself.

When Dennis Chew’s name was announced for the Top 10 Most Popular Male Artistes award, his “sister” Rui En was overjoyed and gave him a big kiss on the cheek immediately. The pair had gotten close during the filming of The Dream Makers, in which they acted as siblings. 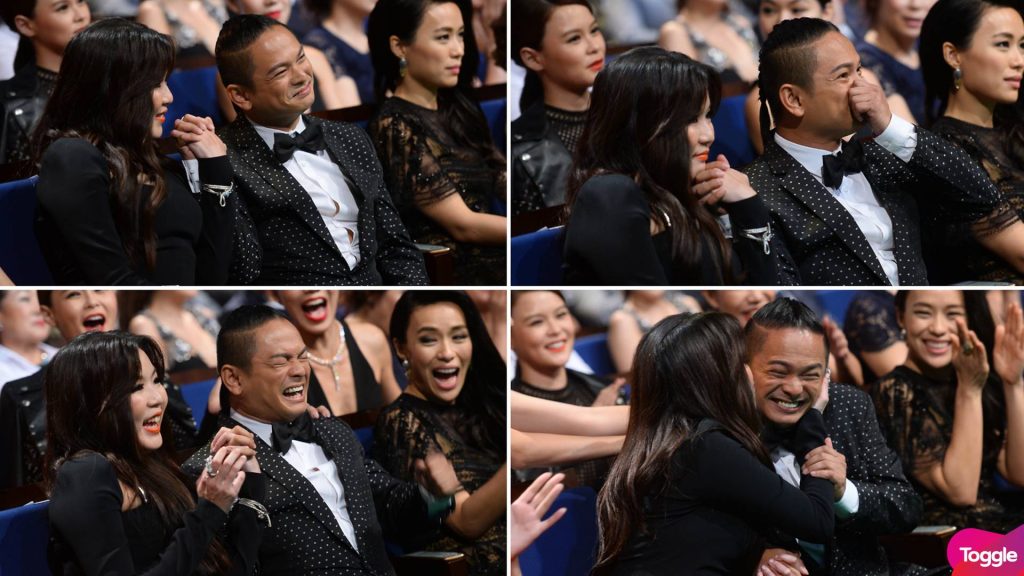 The minute Jeffrey’s name was called out, he sauntered over to rumoured love interest Felicia Chin and hugged her. 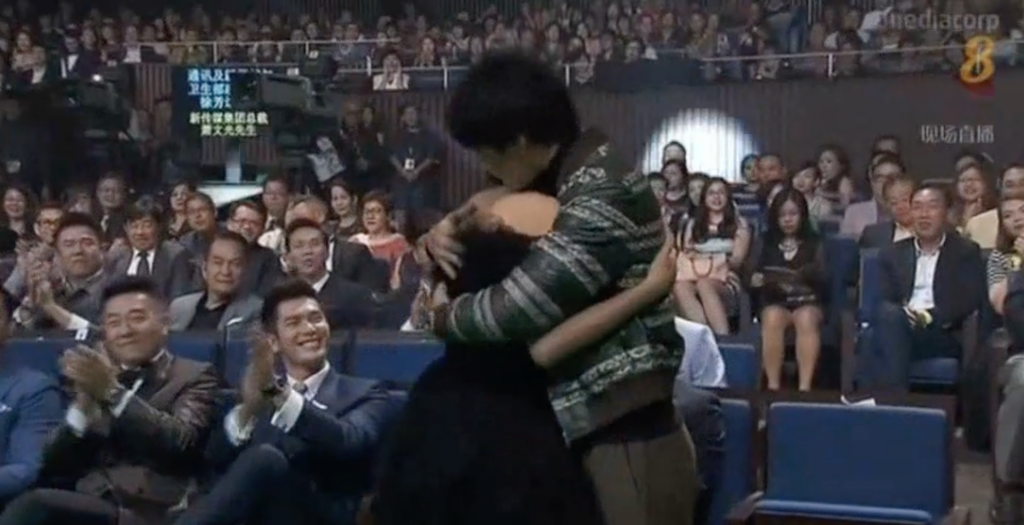 The two acted as a couple in Channel 8 series Life Fear Not and neither of them denied the rumours of them dating – do we smell love brewing?

The last spot for the Top 10 Most Popular Male Artistes was a fierce battle, and saw hot favourites like Romeo Tan, Elvin Ng and Pornsak vying for the much-coveted award.

The tension was palpable, and the award was eventually presented to Elvin Ng, marking his 10th Top 10 Most Popular Male Artistes award.

Here’s a recap of his past speeches:

And here’s a transcript of his speech this year (translated to English) so you can understand:

Thank you for accepting an imperfect Elvin Ng, so that he can walk bravely and be the unconventional person that he is.

To those who always break into a cold sweat for me during this category, you don’t have to worry anymore … This is my last thank-you speech for the Top 10. I know you will miss me.

Although the auntie killer failed to clinch his Top 10 Most Popular Male Artistes award this year, the happy-go-lucky compere continued hosting the show with optimistic.

Of course, he didn’t forget to make some jokes, even if it’s at the expense of hot favourite Rui En. Spoofing what Rui En said at her recent carpark gaffe, Pornsak dropped the mic while closing the show and said:

If you loved me, why didn’t you vote for me? Do you know who I am?

In her typical ice queen fashion, Rui En merely looked down and reacted with a defeated smile.

Surprisingly, popular duke Romeo Tan fell out of the Top 10 Most Popular Male Artistes this year. He had planned to dedicate his award to his mother as a Mother’s Day present this year, and was visibly disappointed when he failed to bag the award.

He did, however, win the London Choco Roll Happiness Award.

Well, there’s always the next year.

At least JulieT(an) won something.

Just last week, Julie Tan clinched the Rocket award (an award given to the artiste with the most improvement in his/her performance) and her second Top 10 Most Popular Female Artistes award at the Star Awards Show 1.

At the Star Awards Show 2 yesterday (24 Apr), the actress received recognition when she was awarded Best Supporting Actress for her role as a villain in The Dream Makers 2. The first-time winner was dressed in a sexy deep purple gown that perhaps revealed a bit too much, causing audiences to do a double take. 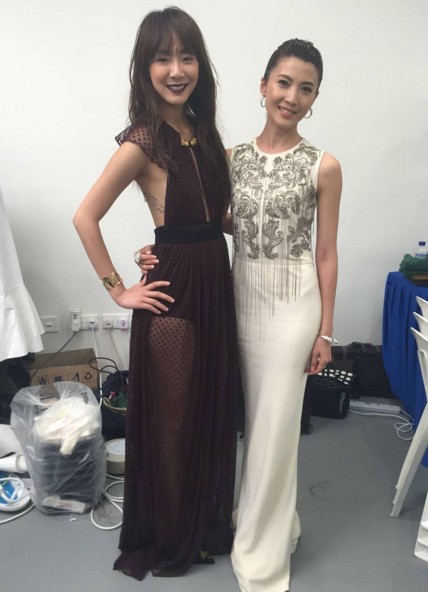