Ong Teng Cheong might have passed away more than a decade ago, but he’s still fondly being remembered as the people’s president. He was Singapore’s fifth president, and the first to be elected by the people in the 1993 presidential election.

Here are 10 reasons why Ong Teng Cheong will always be our favourite president.

1. He started from the bottom and could put himself in the shoes of his people

Ong began his career as an architect and had worked in Adelaide. After he completed his studies at Liverpool, he returned to Singapore and joined the Ministry of National Development as a Town Planner. He was also seconded to the UNDP (Special Fund) Assistance in Urban Renewal and Development Project and led a local team in the comprehensive transportation and land-use planning of Singapore’s central area. In 1971, Ong decided to leave the civil service and started his own practice. A year later, Ong & Ong Architects and Town Planner was born, with him and his wife being the founding partners. After Ong stepped down as president in 1999, he returned to the firm as an advisor.

2. He wanted to contribute to the community even when he was just a regular man on the streets

In the late 1960s when he was staying in Seletar Hills, Ong became involved in grassroots activities. He was later appointed Chairman of the Resident’s Association. Ong stood out with his intelligence, mannerism and committment, and was noticed by the-then Member-of-Parliament for Jalan Kayu, Hwang Soo Jin, who introduced Ong to then-Prime Minister Lee Kuan Yew.

3. He championed the idea of the MRT system despite the strong resistance he faced 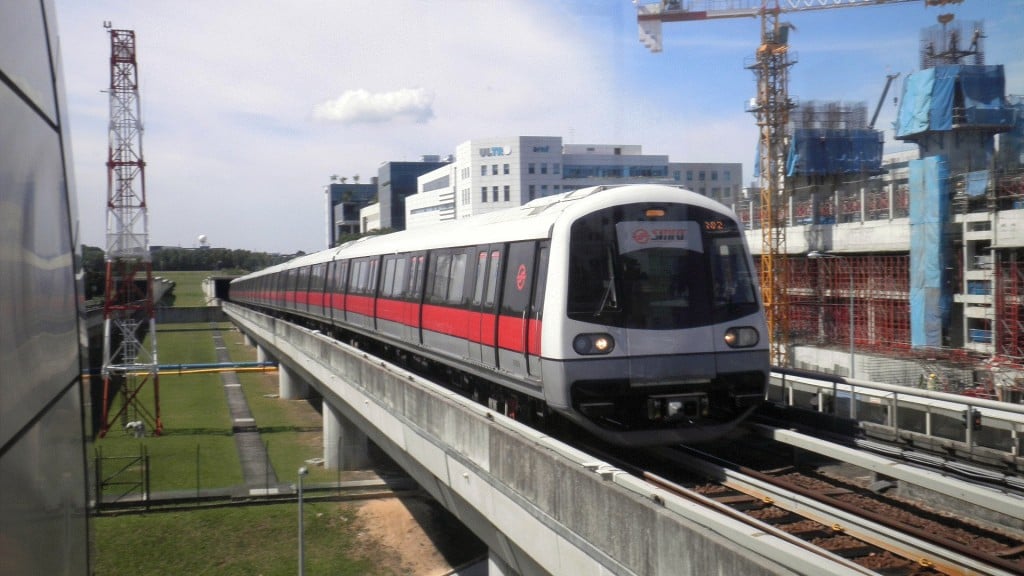 In the 1972 General Election, the People’s Action Party (PAP) fielded him as a candidate in Kim Keat. He later won the election and became Kim Keat’s MP.

His first political appointment came merely three years after he was made Senior Minister of State for Communications. In the Ministry of Communications, one of his responsibilities was to develop the rapid transit network in Singapore. Ong pushed for the development of the train system as he felt it would benefit the nation in the long run.

Back then, the concept of a high-speed rail system was deemed astronomically expensive for a fledgling nation. 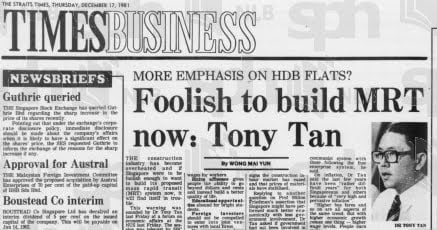 Can you imagine if that idea had materialised instead? Sure, we might grumble incessantly about MRT breakdowns, but without the system, it would take hours for commuters to get from one point to the other – just imagine travelling from Marina Bay to Jurong East.

4. The family man rejected his promotion to the Cabinet as his younger brother was dying of cancer

Here’s a man who values family over his own career.

In 1973, Ong was asked by the Government to take up ministerial office. However, Ong had declined the promotion due to the fact that his younger brother had cancer and was dying. Ong felt that he had to assist his brother and settle his affairs after he passed away at the age of 25. Lee Kuan Yew approached Ong again, and Ong finally agreed to take up office.

5. He supported the arts 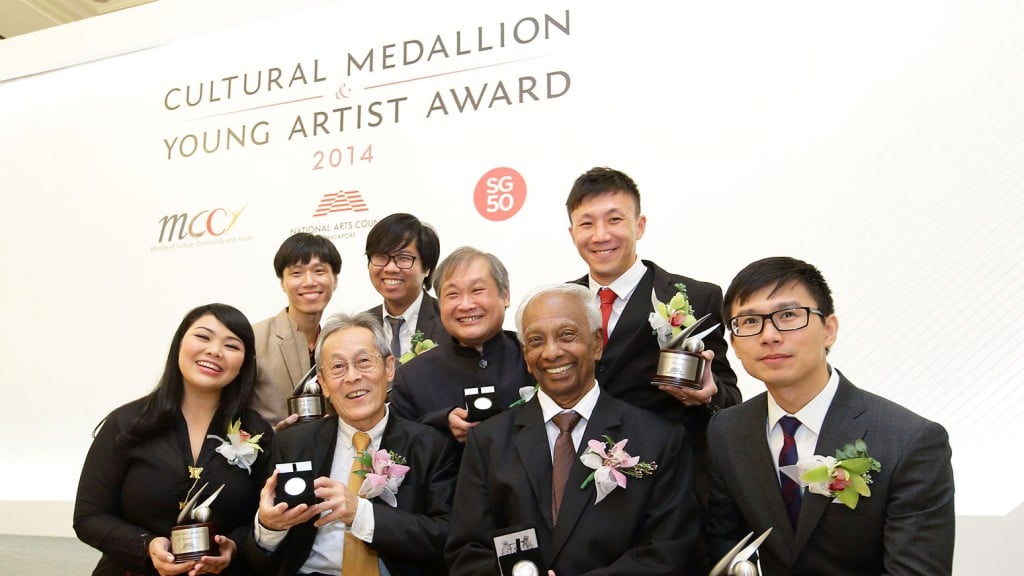 Ong was a pianist and was passionate about culture and the arts. As acting minister for culture, Ong brought about several arts policies. In 1978, he started the Singapore Cultural Foundation to support the arts. The next year, he also launched the Cultural Medallion awards to give recognition to individuals who excelled in dance, drama, music, visual arts and literature. 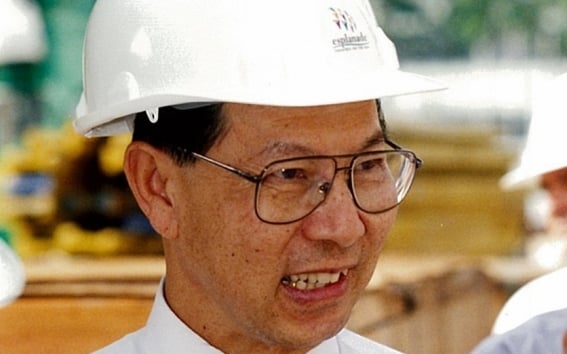 When Ong was NTUC’s secretary-general from 1983 to 1993, he paid extra attention to daily-rated, low-wage workers. He made sure that these workers still received their 13th-month bonuses in spite of the 1985 recession, the most severe economic downturn since Singapore gained independence. During the recession, he managed to garner the support of the workers in accepting wage restraints as well as a cut in employers’ Central Provident Fund contributions.

In January 1986, Ong sanctioned a strike without informing the cabinet, marking the first strike in Singapore in eight years. He risked antagonising his colleagues, and stood by the workers. He felt that it was the right thing to do, as the management in the shipping industry was taking advantage of the workers. Understandably, some of the cabinet members were angry with Ong, including the minister for trade and industry and his officers.

Despite angering the cabinet members, Ong still believed that his decision was right.

They had calls from America, asking what happened to Singapore? — we are non-strike. I said: if I were to inform the cabinet or the government they would probably stop me from going ahead with the strike. It only lasted two days. Then all the issues were settled. It showed that management was just trying to pull a fast one. So I believe what I did was right.

7. He acted independently and stood up for what he deemed right

Some people still ask whether my long previous association with the PAP will stop me from acting independently. The answer is no. My loyalty is first and foremost, to the people of Singapore. It has always been so, and will always remain so.

Instead of being a PAP yes man, Ong considered the welfare of his people before anything else.

8. He initiated the President’s Star Charity 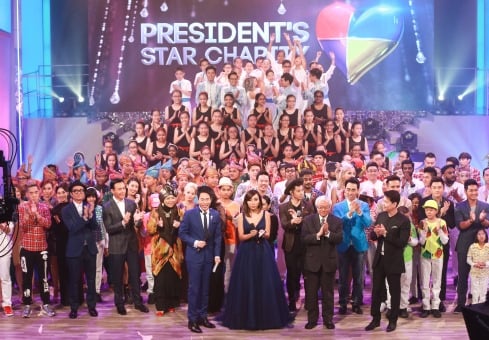 During his term of office, Ong initiated a number of charities including the President’s Star Charity, which benefitted at least 160 organisations financially.

The challenge is still held annually till this day, and last year’s (2015) President’s Star Charity challenge raised more than S$6million.

9. He was steadfast in love 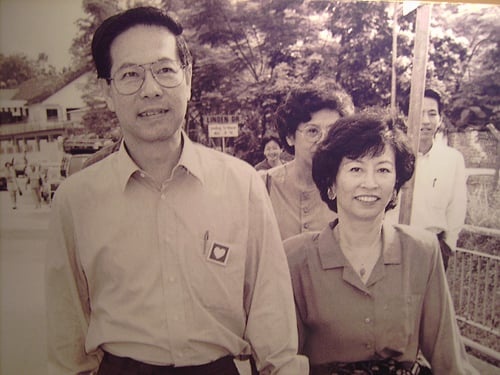 Like Lee Kuan Yew, Ong also loved his wife deeply — so much that he would forsake his career for her.

Although it was widely believed that Ong had wanted to run again for a second six-year term as president, Ong asserted that his inclination was not to stand for re-election, a decision he’d been telling his friends since late 1998.

However, his wife was part of the reason why Ong did not want to stand for a second presidency.

Also my wife was sick with cancer and we knew that if she died, it would be difficult for me to stand without a first lady. She felt very apologetic and that was another reason why my inclination was not to stand. I hoped that if I stepped down I would have more time to be with my wife, because her prognosis was not very good.

10. He wanted his ashes to be placed together with ordinary citizens 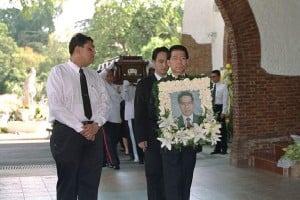 On 8 Feb 2002, Ong passed away at age 66 due to lymphoma. As the date of Ong’s passing was too close to Chinese New Year, the President’s family decided not to give him a state funeral. Before Ong’s death, he had asked to be cremated. He also wanted his ashes to be placed at Mandai Columbarium where the ashes of ordinary citizens are kept, instead of a burial at Kranji State Cemetery where late dignitaries are usually buried.

During Ong’s tenure, he displayed foresight and stood by his convictions. He gained the trust and support of the people, and it’s no wonder he’s still being remembered as the people’s president till this day.

Featured image via NAS
With reference to Istana, Five Stars and a Moon, Wikipedia, Singapore Infopedia