Man Goes On Epic Road Trip From India To S’pore For Christmas, Twitter User Offers To Host Him Singapore will be playing host to a very special guest this Christmas Eve — a man who’s attempting to drive solo on his trusty motorbike all the way from Guwahati, India. A Twitter post by his friend – going by the handle @raajeevs16 – detailed his crazy schedule on Monday (18 Nov) to excited netizens who agreed it would be an ambitious endeavour. 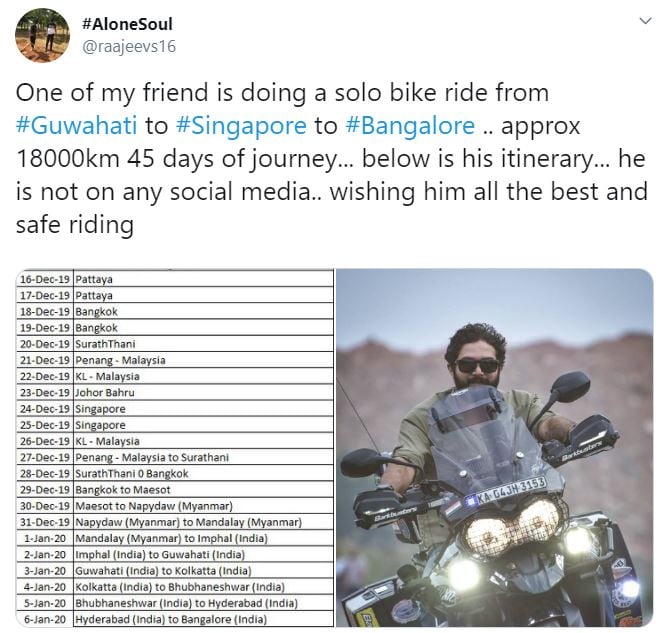 Here’s how you can volunteer to host him when he arrives in Singapore, in time for the iconic Orchard Road light up & Christmas market at Gardens by the Bay. The Twitter user posted a picture of his friend on his bike, with his intended dates to reach each destination. The rider’s expected to reach Singapore just in time for Christmas Eve (24 Dec), before heading on return journey through Penang, Bangkok & Mandalay, back to Bangalore.

A hospitable netizen offers to host him

Although his friend isn’t on social media, Twitter users have celebrated his road trip, expressing how exciting it sounds.

Others conveyed their well-wishes, so he would stay safe on his travels and on the road.

A hospitable citizen from Malaysia even offered to host & coordinate his itinerary.

If you’re interested to meet him in Singapore, you may reach out to his friend on the thread here, who has offered to let the rider know.

An epic road trip & adventure of a lifetime

Breezing down winding dirt roads in Cambodia’s idyllic countryside will definitely be a highlight the brave rider will be looking forward to. But if you happen to encounter this rider in line at the traffic light next to you this Christmas, roll down your windows to greet him for he has truly come a long way. To the anonymous bike rider, we wish you safe travels and look forward to welcoming you in Singapore.