Over the last 2 days, a video of a man assaulting another man lying on the ground had gone viral without much context.

We could only see a man lashing out angrily against the other with kicks and punches. Word has it that the 2 are colleagues, and were allegedly fighting over work issues.

Police said a 45-year-old man was arrested after the incident. He has been charged today (24 Sep) for voluntarily causing grievous hurt to the 47-year-old victim.

According to TODAY Online, residents informed police of a fight at around 3.45pm on Tuesday (22 Sep), happening at Block 182A Rivervale Crescent.

But before officers reached the area, the 45-year-old man had run away. 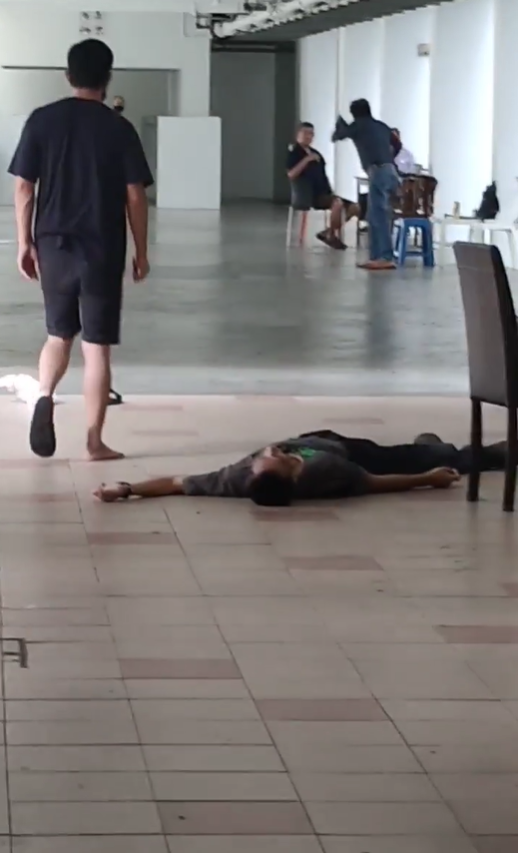 Personnel from the Ang Mo Kio Police Division successfully arrested him in 4 hours, thanks to police cameras and information from people on the streets.

Channel NewsAsia (CNA) reports that he’s been sent to Institute of Mental Health (IMH) for psychiatric observation. He’ll be brought to court later on 8 Oct.

If he’s found guilty of voluntarily causing grievous hurt, he faces a jail term of up to 10 years, a fine, or getting caned.

The 47-year-old who was lying on the ground was brought to the Sengkang General Hospital.

He was still conscious despite being injured from the fight. According to CNA, his facial bone was fractured.

He is currently still being treated, and is now in stable condition.

The viral video on Facebook captured the incident, where the 45-year-old man in a black shirt was seen kicking and punching the victim.

Meanwhile, the 47-year-old lies on the ground, motionless.

Shin Min Daily News reports that the 45-year-old man had recommended the 47-year-old a job as a cleaner. Unfortunately, the latter ended up performing poorly.

This incident had, in turn, taken a toll on their friendship, as the 45-year-old felt he had lost face as his colleague.

While it’s unfortunate that a friendship had turned sour in such a manner, violence is never the answer. More importantly, don’t take matters into your own hands.

It’s not worth getting fined or jailed over a moment of rage.