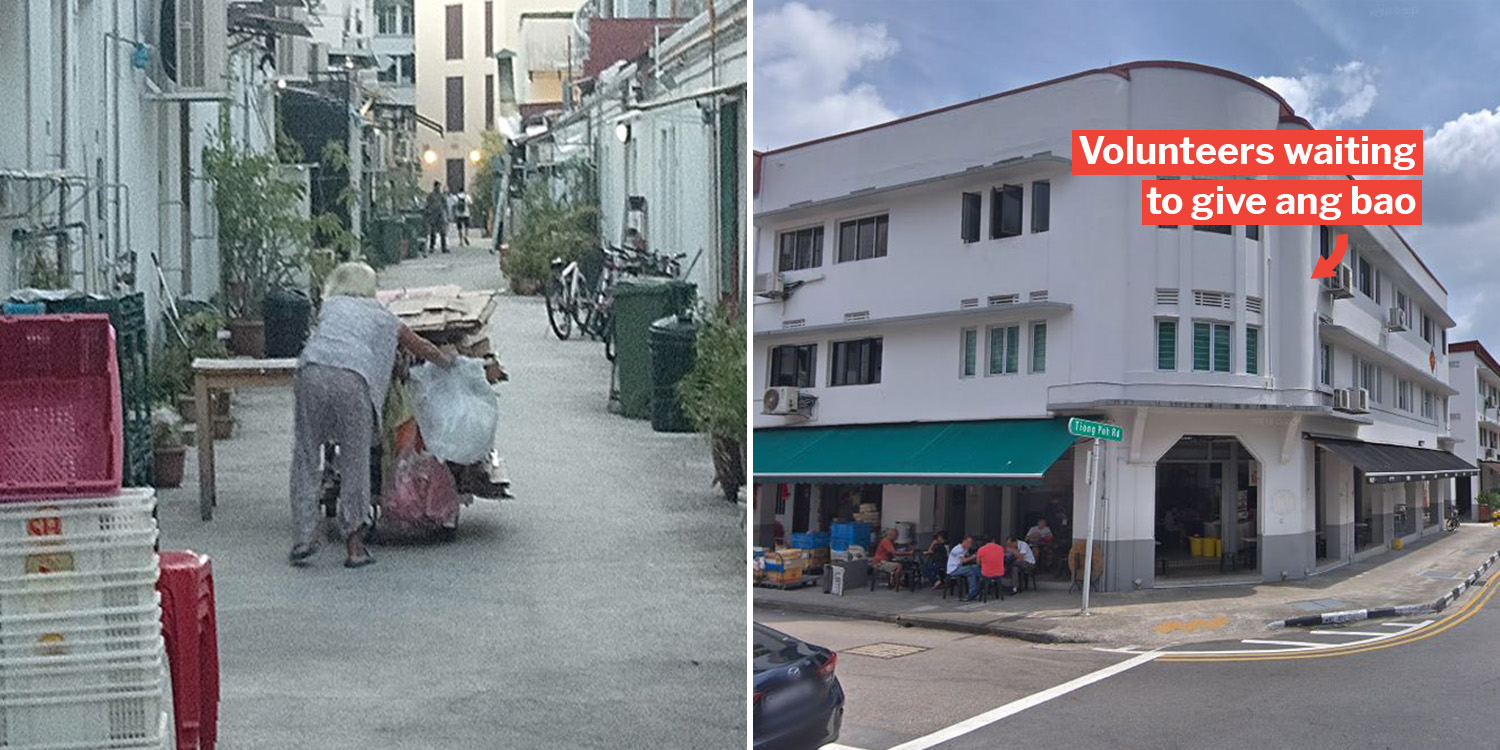 She was last seen at Tiong Poh Road.

As Singaporeans, we often see elderly retirees spend time with their friends by challenging each other to a game of chess or going for morning walks together.

At the same time, it’s also not uncommon to come across those who have to spend the day collecting cardboard waste and aluminium cans for a living. 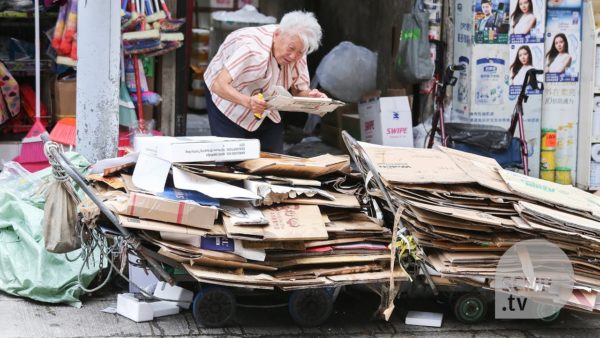 This is exactly how an elderly lady, probably in her 80s or 90s, in Tiong Bahru presumably survives.

In a Facebook post on Wednesday (21 Aug), a group of volunteers spotted her at Tiong Poh Road, slowly pushing a cardboard-filled trolley along the alley while vehicles patiently waited behind her. 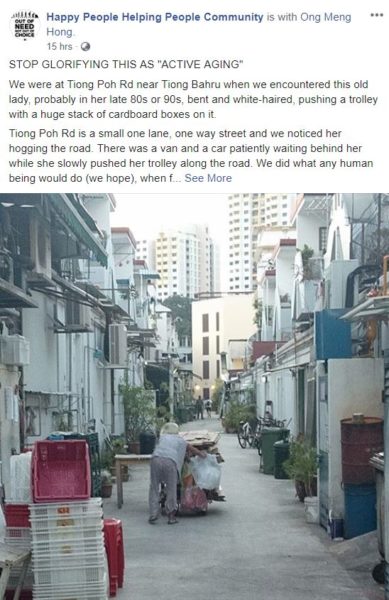 Feeling sorry for her, the kind Samaritans from Happy People Helping People Community gave her $20 hoping it would help.

They’re now looking for volunteers to locate the lady again so they can give her ang baos.

According to a Facebook post by Happy People Helping People Community, a group of volunteers encountered an elderly lady, pushing a trolley with a pile of cardboard pieces on it.

It also came to their attention that the road they were on, Tiong Poh Road, is a 1-way street and there were many drivers patiently waiting behind the elderly lady.

Looking at her predicament, the volunteers approached the old lady and offered to push the trolley for her, but she denied their help. 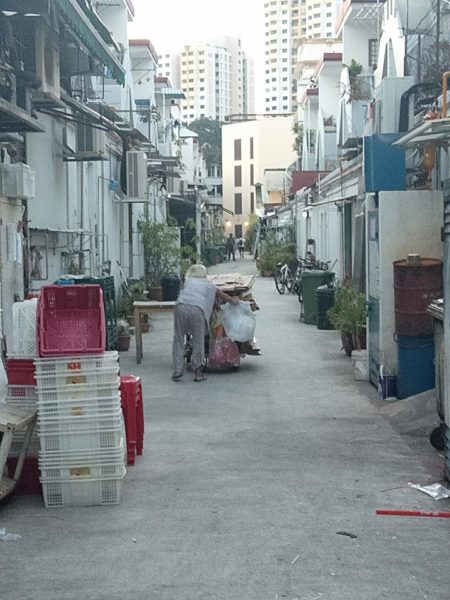 The volunteers then surmised that she probably needed to rely on the trolley as a ‘walking stick’ so she can support her hunched posture.

Upon her rejection, they tried to start a conversation with her just to realise that she could not understand English.

Realising that there was nothing else they could do, they handed her $20, hoping that this would help cover her expenses for the day.

Finding time to meet her again

In a separate post the next day, the volunteers shared that they are trying to locate the old lady at Tiong Bahru again as they received many help offers. 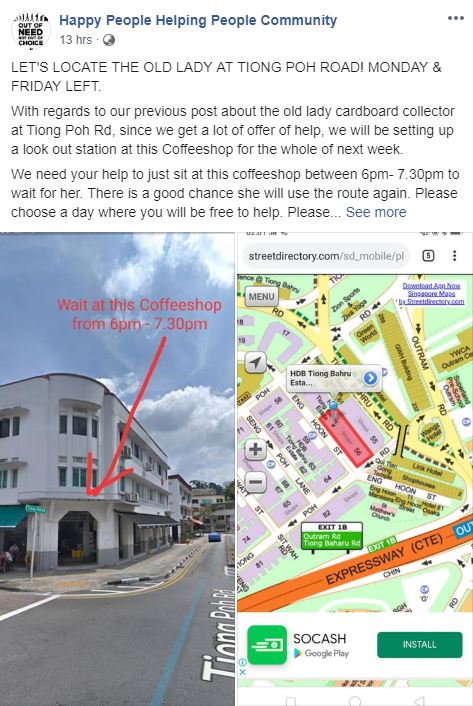 They’re setting up a lookout station at a corner lot coffee shop at Tiong Poh Road starting 22 to 30 Aug, from 6pm to 7.30pm, in hopes of bumping into her again. 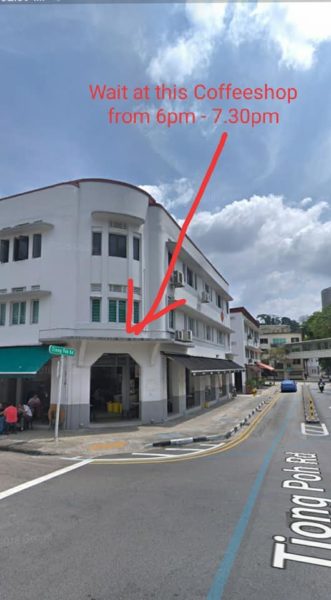 They urged other volunteers staying around that area to talk to the elderly lady whenever they see her around.

Since they could not speak Mandarin, they hope someone could talk to the elderly lady and find out more about what she does in her life, other than collecting cardboard.

The volunteers came up with a list of dates for people to refer to. Those available on certain dates can book their slots through the comments section. 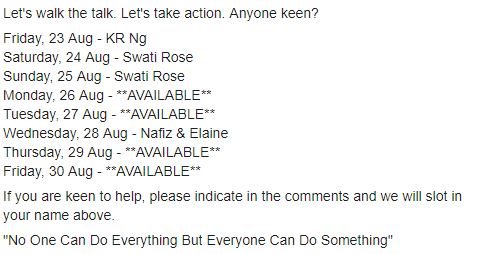 If you’re interested to help out, you can drop a note here.

Let’s do our best to help the poor

Despite Singapore being a first-world country, poverty still exists among us. But, it’s heartening to know that there are kind Samaritans who care enough to lend them a helping hand.

Even though it’s impossible to help every single one of them, we can start by stepping out of our own bubbles and helping them to the best of our capabilities.

After all, it’s true what they say: No one can do everything, but everyone can do something. And we’re positive that a little help goes a long way to making a difference in their lives.