He found the lines interesting, without elaborating.

Former prime minister of Malaysia, Dr Mahathir Mohamad, has announced the formation of a new party unrelated to either dominant faction in Malaysian politics today (12 Aug).

Named “Pejuang”, which means warrior in Malay, the 95-year-old revealed the party name along with a pantun – a type of poem – that apparently references Singapore.

Law and Home Affairs Minister K. Shanmugam spotted the apparent reference, and it highlights just how much Dr Mahathir thinks about Singapore.

You can view the full pantun here on Dr Mahathir’s website.

Poem by Mahathir may reference Singapore

The pantun makes reference to Bersatu, the party he founded with current Prime Minister Muhyiddin Yassin.

Dr Mahathir along with 5 other MPs were kicked out of Bersatu in Feb, and it later formed the Perikatan Nasional alliance to become the new Malaysian government.

The pantun also states that corruption was destroying Malays in Malaysia.

Translation:
Look at the Malays in the neighbouring country.
Is their country still Malay?

The entire poem revolves around how Malays in Malaysia will become displaced if they continue to support kleptocrats.

The poem didn’t escape the notice of Mr Shanmugam. 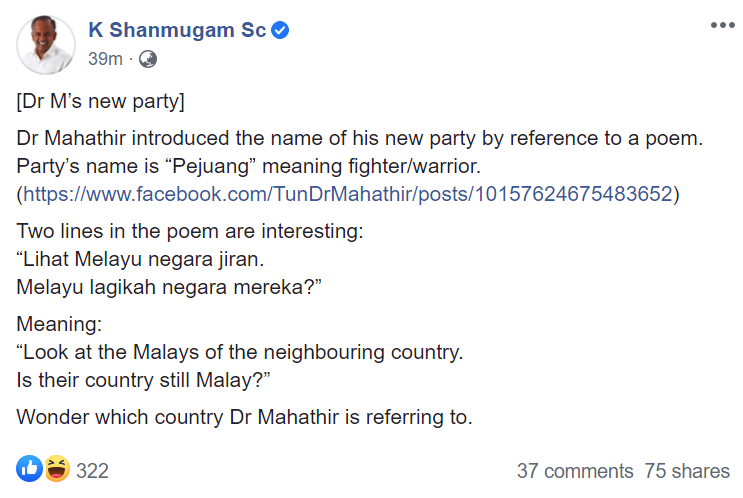 He found the lines interesting, and wondered if they were indirectly referring to Singapore.

Meanwhile, Parliament Speaker Tan Chuan-Jin didn’t beat around the bush on the subject, calling it ‘amusing’ and ‘sad’. 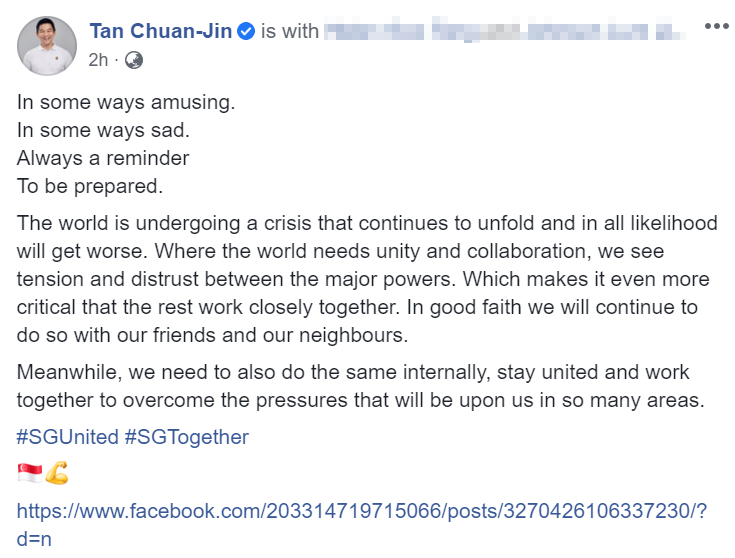 He lamented that in the middle of a crisis, there is distrust among ‘major powers’, without being specific. Perhaps he’s referring to the ongoing trade war between the United States and China.

However, he reiterated that others need to work together — this includes Singapore and Malaysia. At the same time, cooperation is also required internally.

There is a precedent of Dr Mahathir talking about Singapore, specifically on their attitude towards Malaysia.

His thoughts about Singapore’s water agreement with Malaysia are well-known — he thinks that Singapore profits from it much more, though the agreement still stands today.

While UMNO and Bersatu take up his current focus, Singapore has seemingly always been on Dr Mahathir’s mind.

His relationship with Lee Kuan Yew was rocky, and his 2nd term’s foreign relations mostly revolved around bringing up decades-old matters like the water agreement and the crooked bridge.

Neighbours need to work together

At the moment, Dr Mahathir isn’t the Prime Minister. However, he seems determined to fight his way back up there with Pejuang.

Will he work together with Singapore should he be the Prime Minister for the 3rd time?

At the moment, things are progressing between the neighbours, with the border now open for essential travel since 10 Aug.

We certainly hope that these friendly ties continue.