NDP Jalan! Is Like Pokemon GO For Singaporeans To Catch NDP Parade Tickets

I’m level 40 on Pokemon Go (PoGo) and needless to say, I was stoked beyond words when I received news of the latest augmented reality (AR) app in town — NDP Jalan! 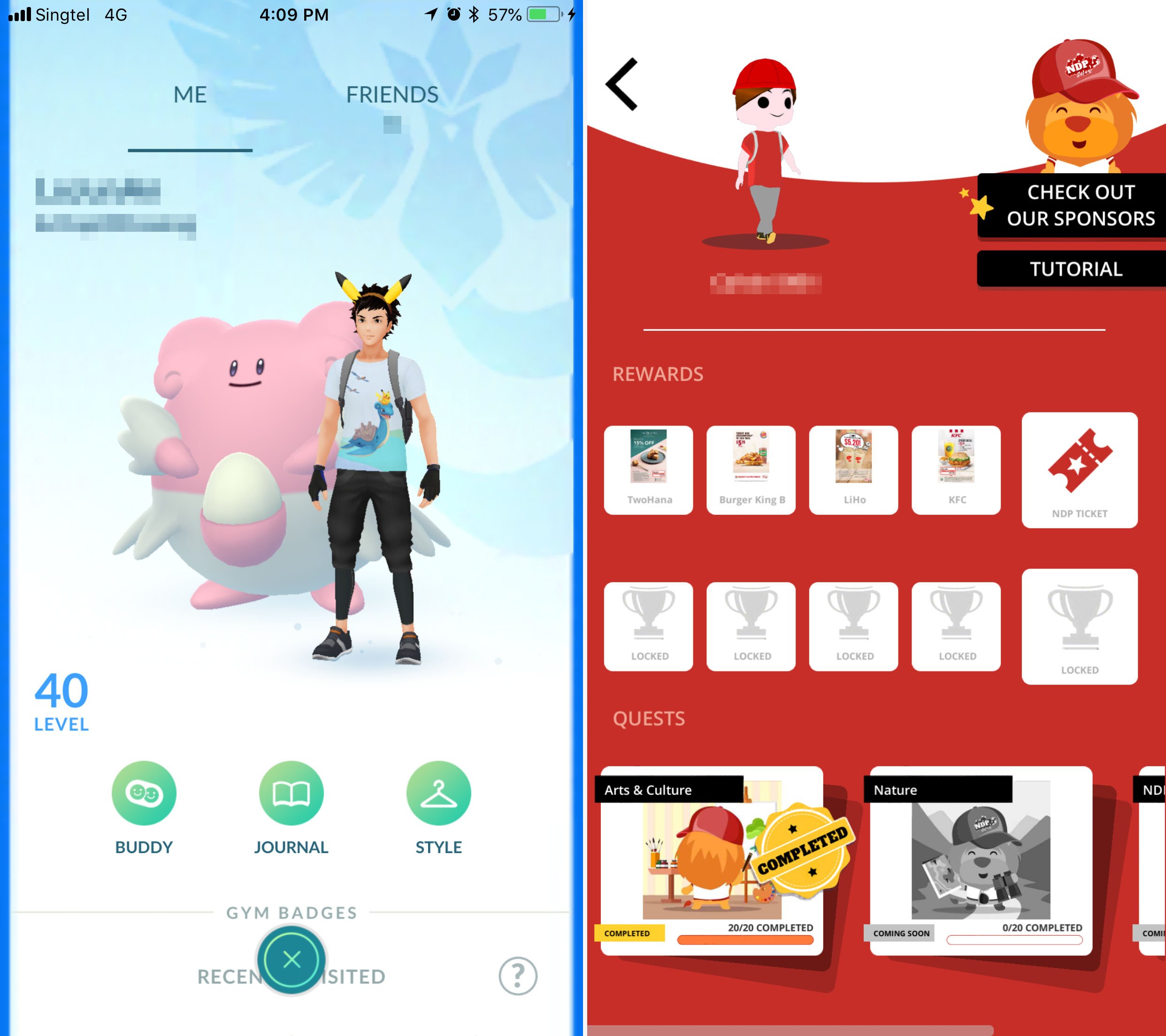 Without hesitation, I jio-ed a group of friends to check the game out over the weekend.

And guess what, they said yes!

You might be thinking to yourself that we must be a bunch of nutcases for spending our precious weekends playing a handphone game.

But our ‘NDP Jalan!’, didn’t exactly turn out the way we expected.

NDP Jalan! is an interactive augmented reality (AR) game that aims to “encourage Singaporean to rediscover parts of Singapore and interact with what they see around them”.

Unlike PoGo, which has a rather ambiguous end-game, the end-game for NDP Jalan! is clear from the get-go.

Together with my friends, we embarked on the Arts & Culture themed adventure, and here’s a sneak peak on what to expect.

Most quests under the Arts & Culture theme came in the form of multiple-choice questions.

The questions were fairly simple, and information required to answer can be found on description boards that accompanied the attractions. 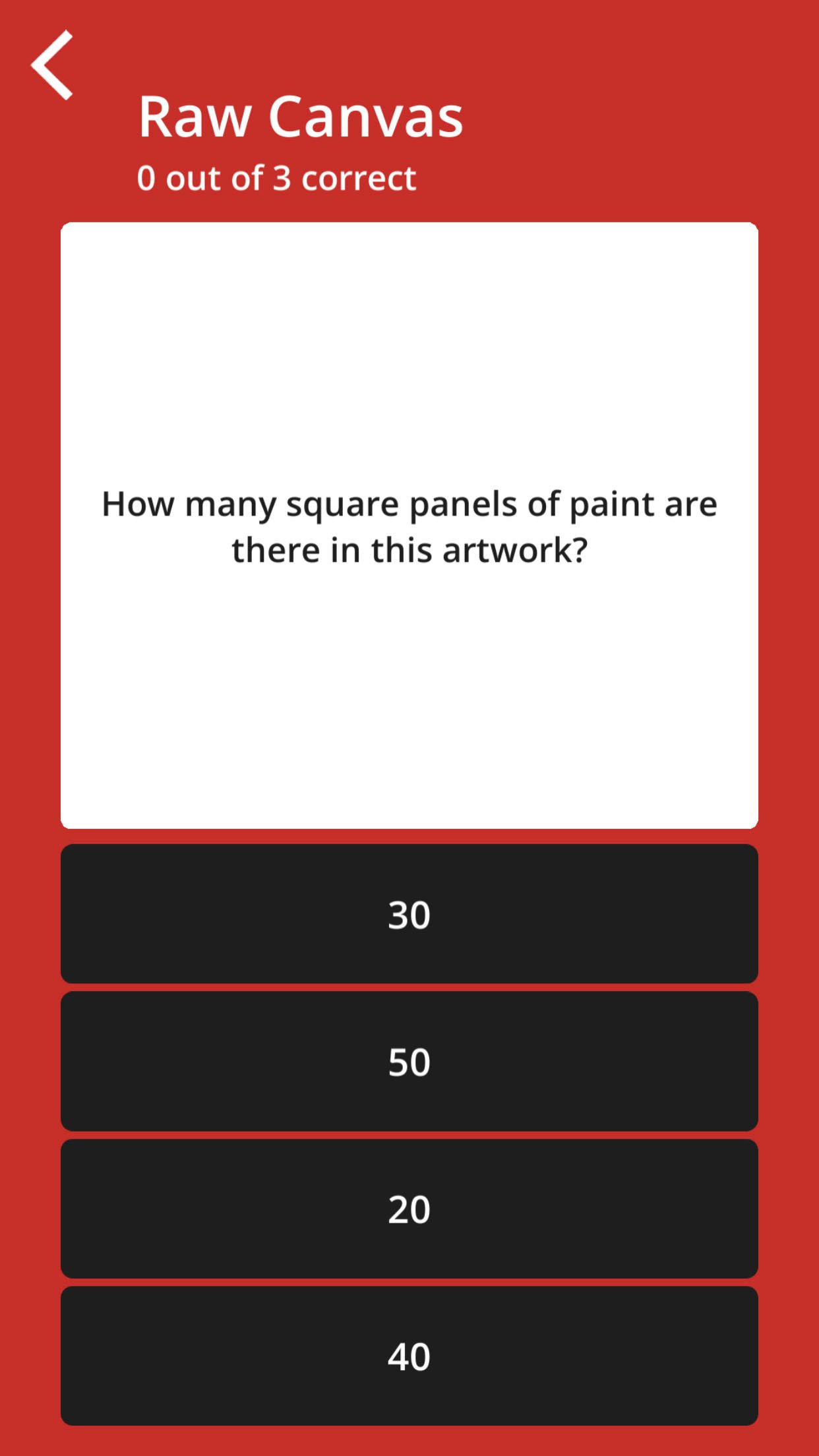 The query directs users to count how many panels there are in a an artwork. 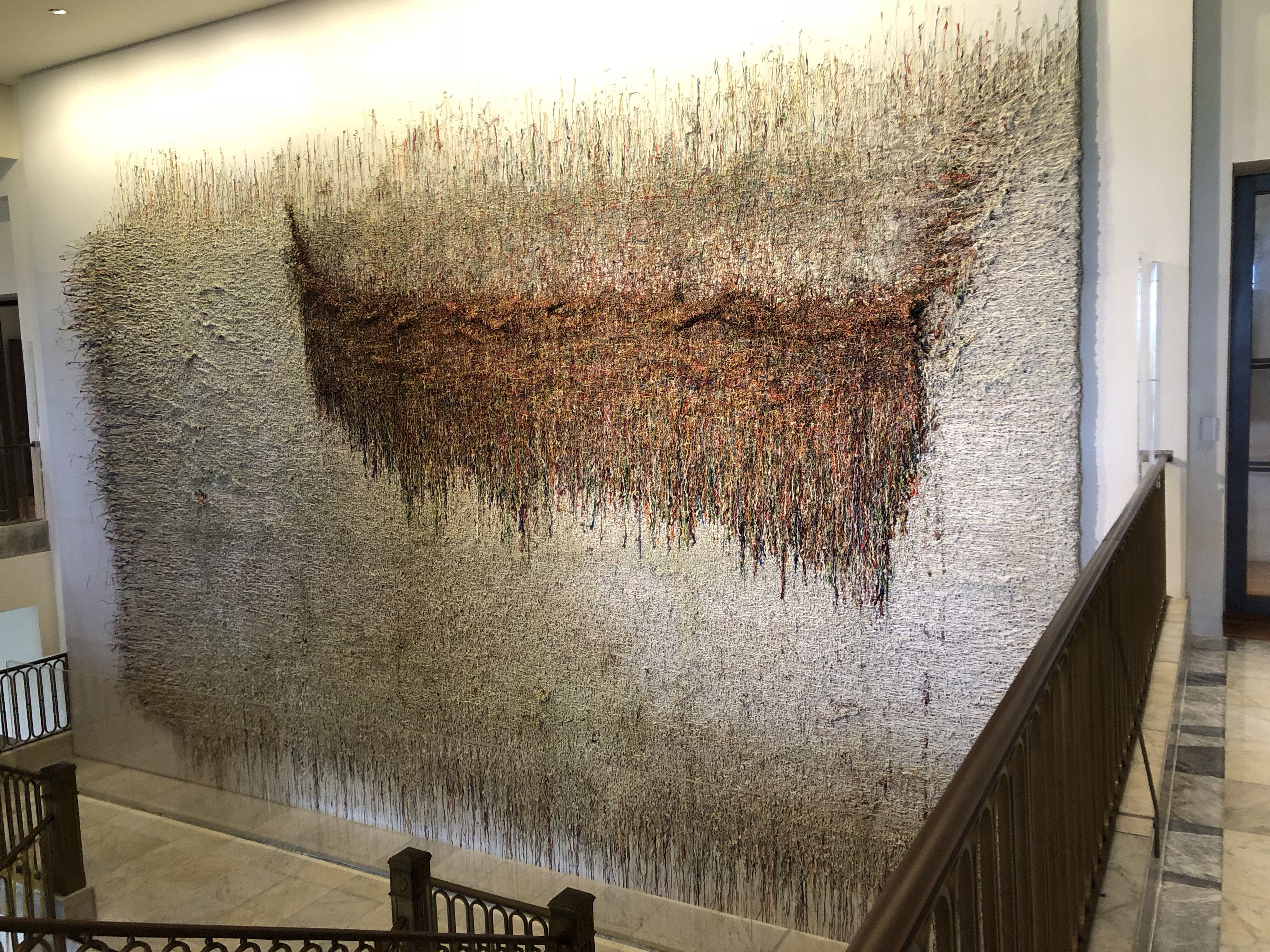 Don’t be fooled by the complexity of the piece, for the blurb next to the artwork gives you a direct answer. If all things fail, Google is your best friend. *Hint*

We also found out that there were no penalties for wrong answers, so go ahead and try all 4 answers if you can’t find your answers.

Having said that, we felt that the game developers did a good job of developing the game in line with its objectives.

Uncomplicated questions helped us get past each stage with ease — and the hassle of looking for answers did not deter us from rediscovering our surroundings.

Quite a number of quests also required us to play minigames which involved AR technology.

Players have to trace the outline of the sculpture in one go, without letting their fingers off their screens. 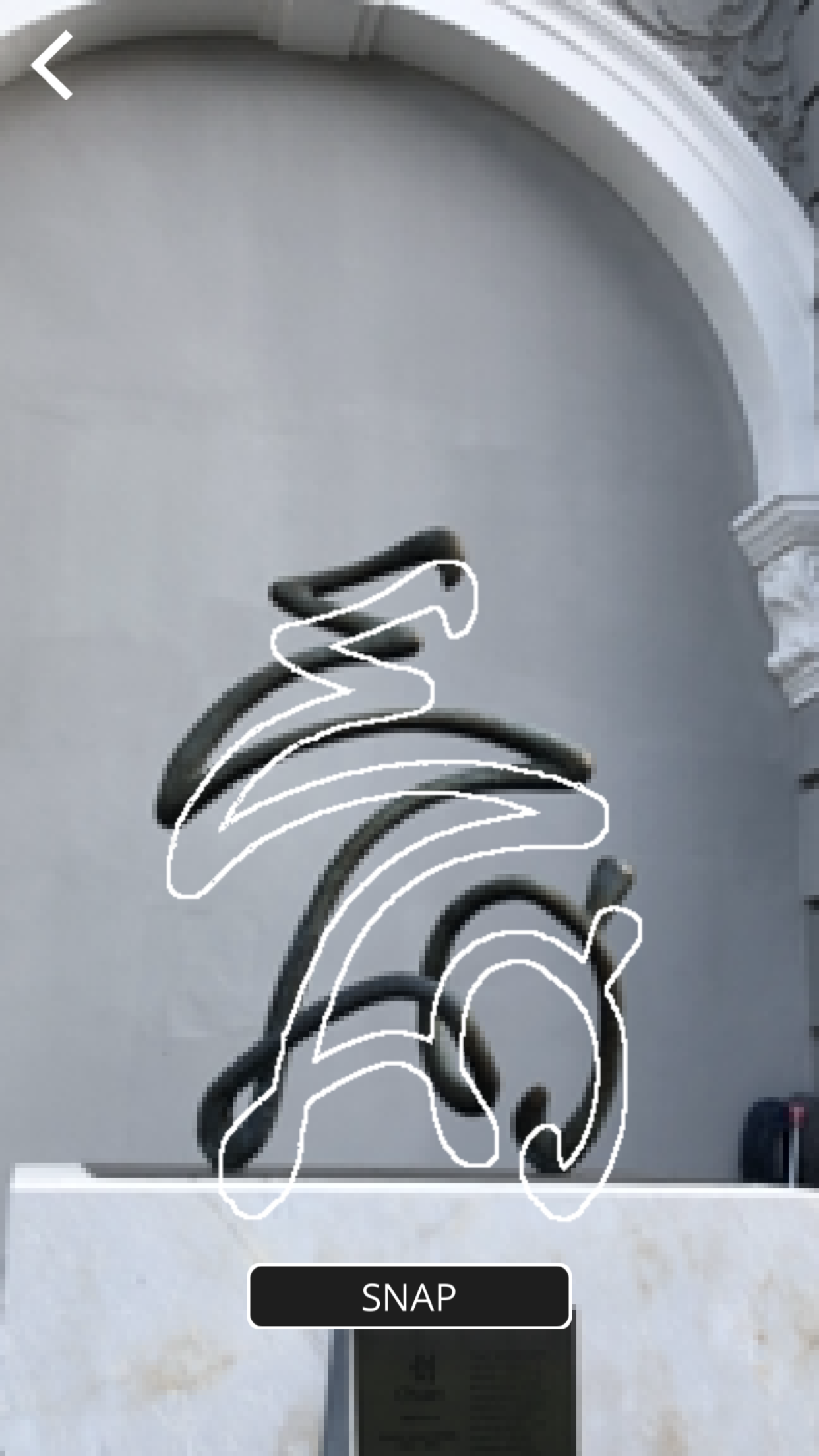 We probably got our fair share of stares throughout our adventure.

But we focused on having fun! 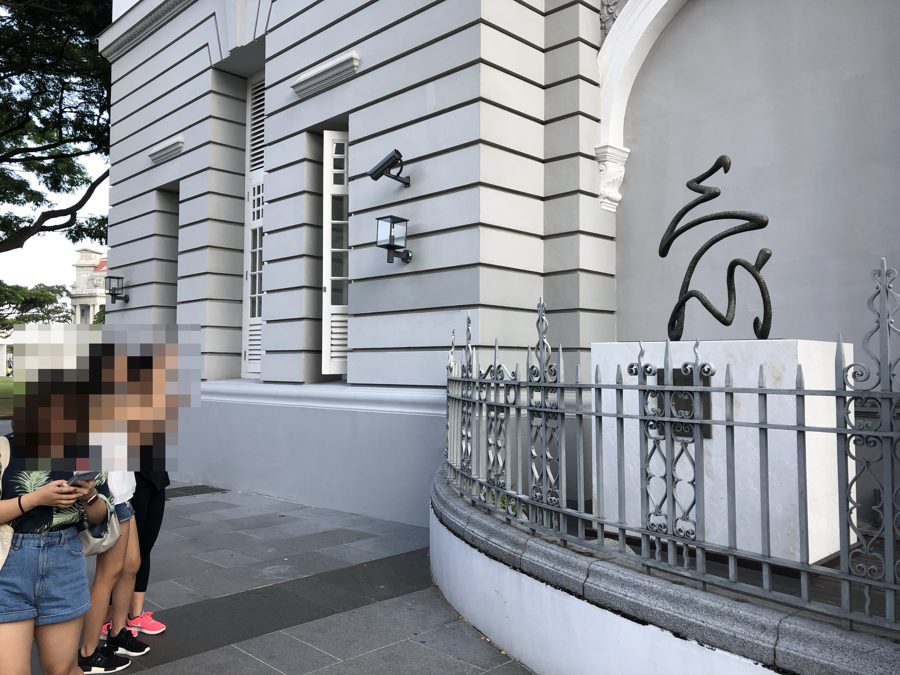 Players have to find Lionel – the mascot of the game – in an AR whack-a-mole mini-game. 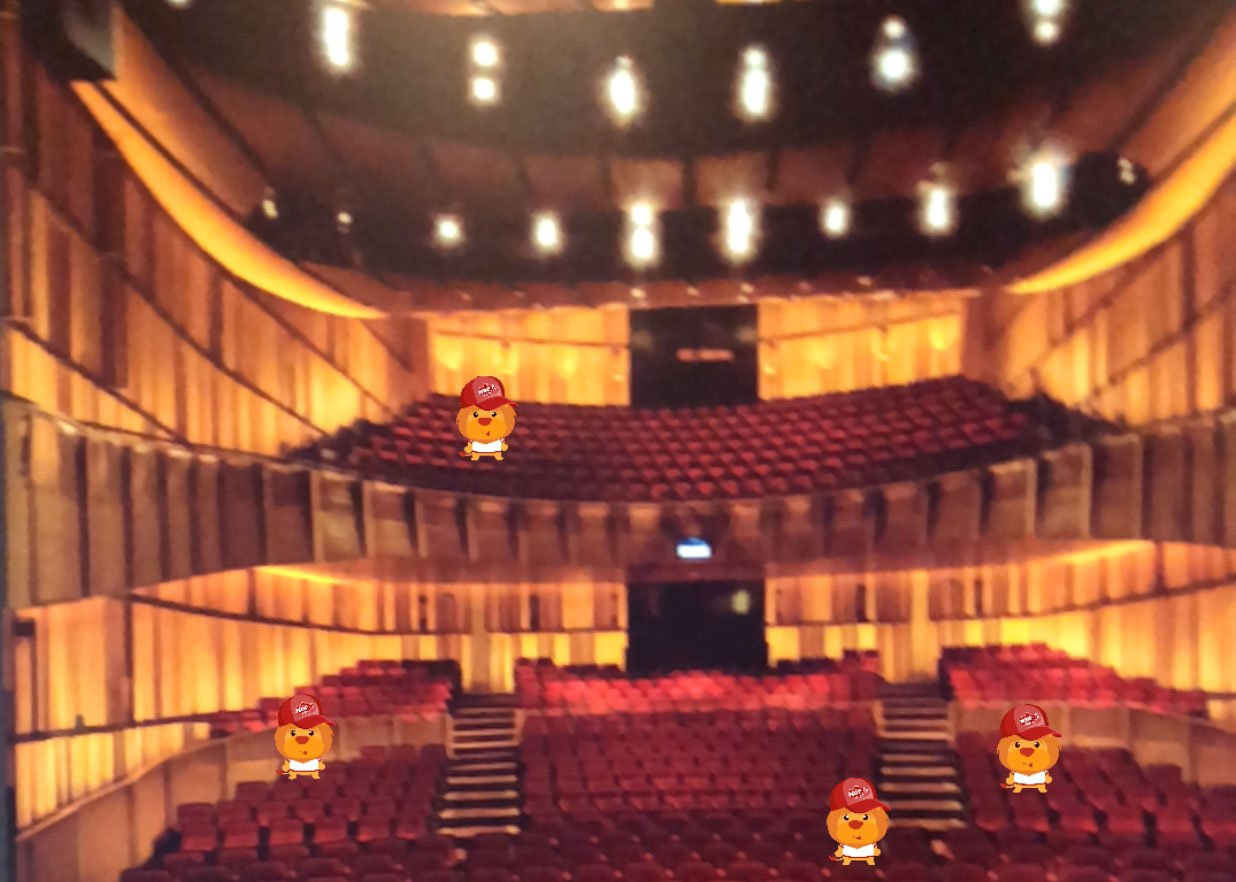 In general, we felt that the AR features were pretty interactive and engaging.

Especially in contrast with the comparatively mundane general knowledge MCQs we experienced earlier.

Even Primary 5 kids were encourage to use the app’s AR tech, to interact with their newsletter named A-OK!. 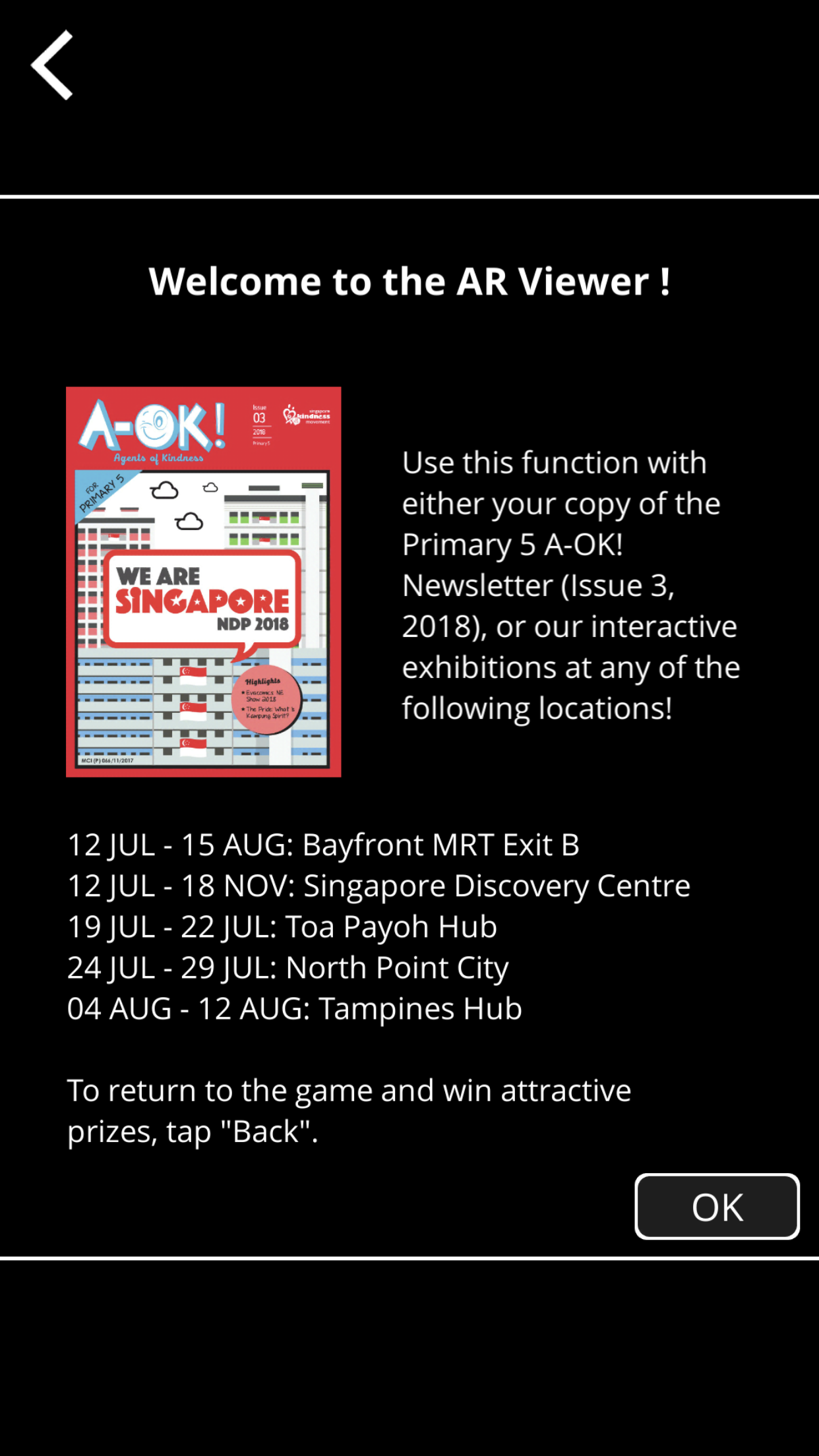 We thought this was a sweet addition to their NDP preview experience.

We’ve gone through the trouble of mapping out places that we visited during our adventure.

In total, we spent approximately 3.5 hours on foot covering 2km.

But be warned, our journey felt much longer than that.

Some quests will also require you to venture out into the open, where you’ll be under the mercy of the hot sun.

You may want to heed Lionel’s advice and equip yourselves with sunblock before embarking on this patriotic adventure. 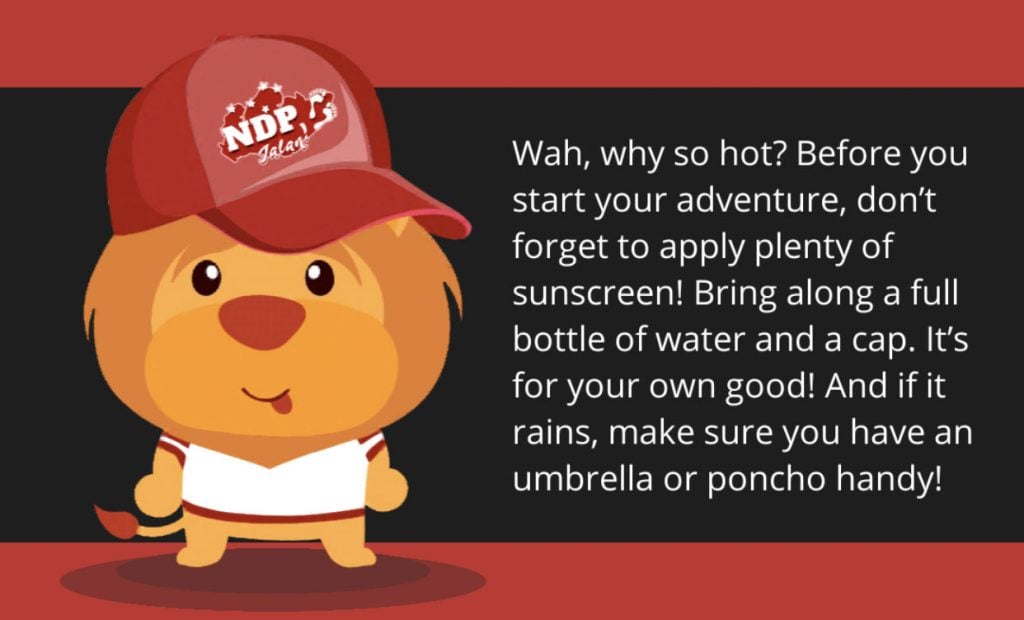 In other words, you won’t be able to commence the quests unless you travel to the stipulated location.

But don’t worry. The app comes with a compass that will make help direct you to your next destination. 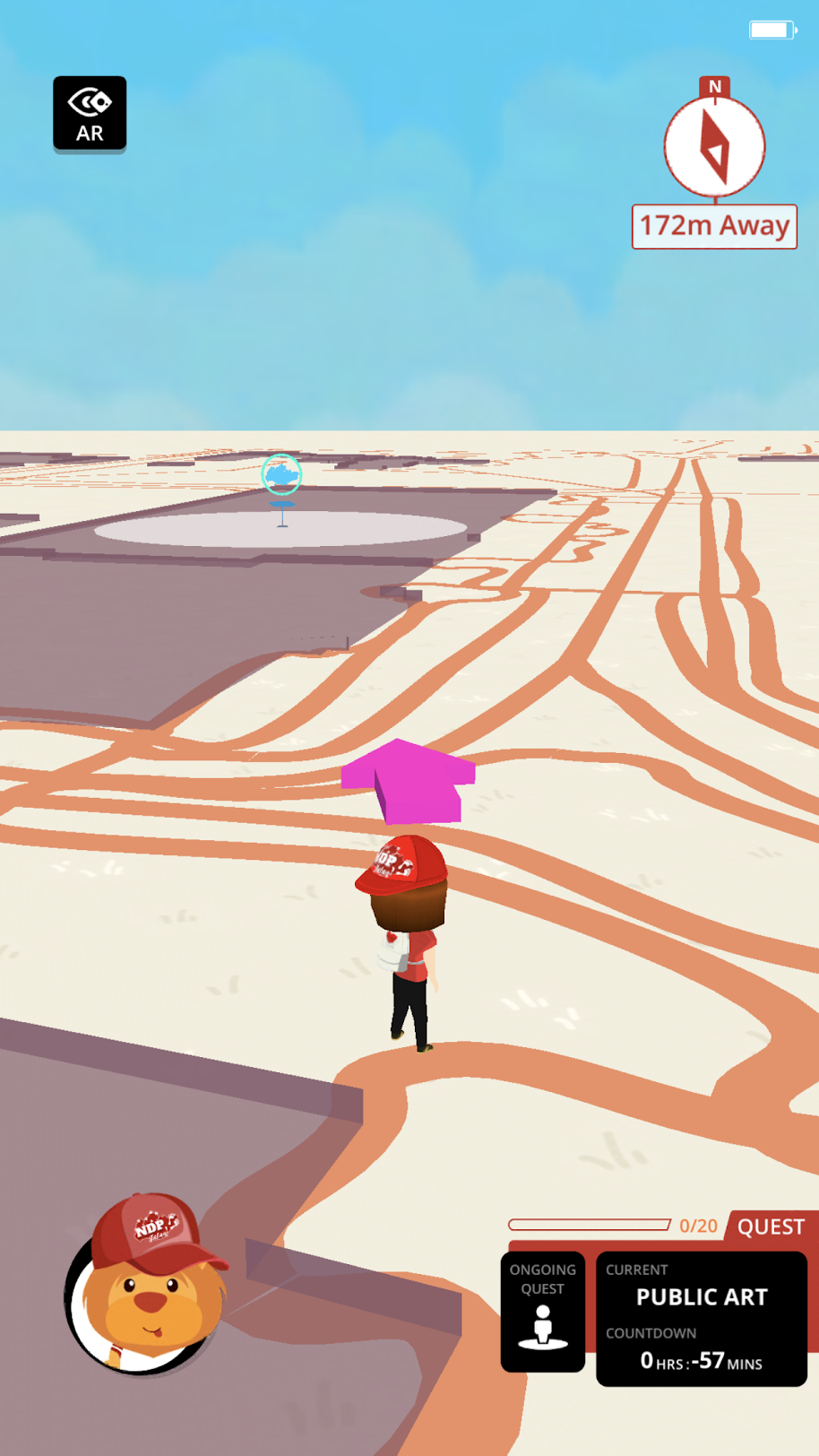 Several of our quests are located in museums and may require tickets.

So if you are a Singapore Citizen or Permanent Resident, do bring along some form of identification to receive museum tickets for free.

So should you decide to not complete all 20 quests, you will not leave empty-handed.

We were rewarded with a voucher of our choice after every completing every 5 quests.

There was a large variety of vouchers from all kinds of stores to choose from. 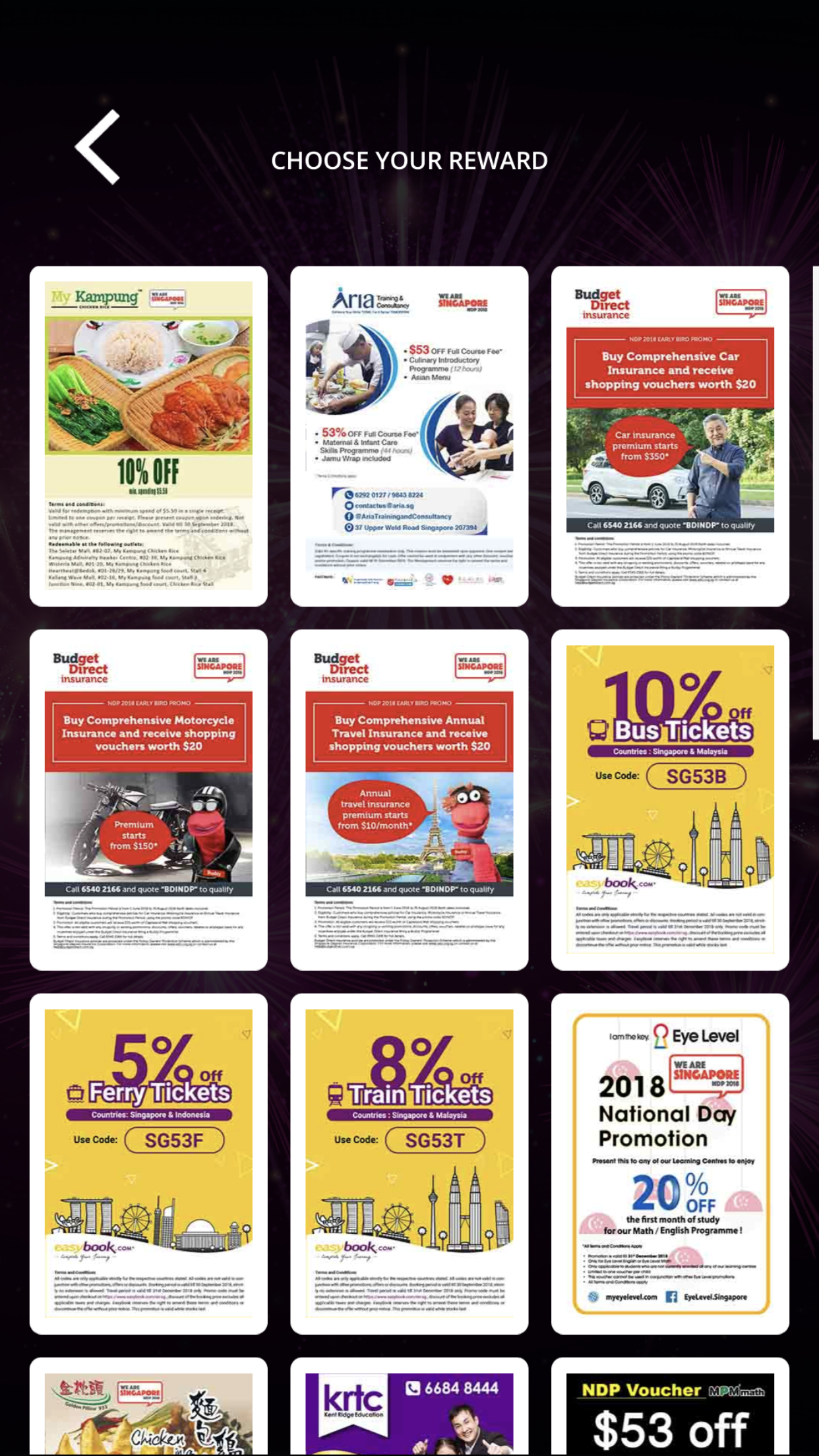 But being the gluttons that we were, all of us ended up choosing food-related vouchers.

In fact, we’re still bewildered at this particular voucher.

$9.90 for a Zinger meal sounds pretty exorbitant to us. So we decided to investigate. 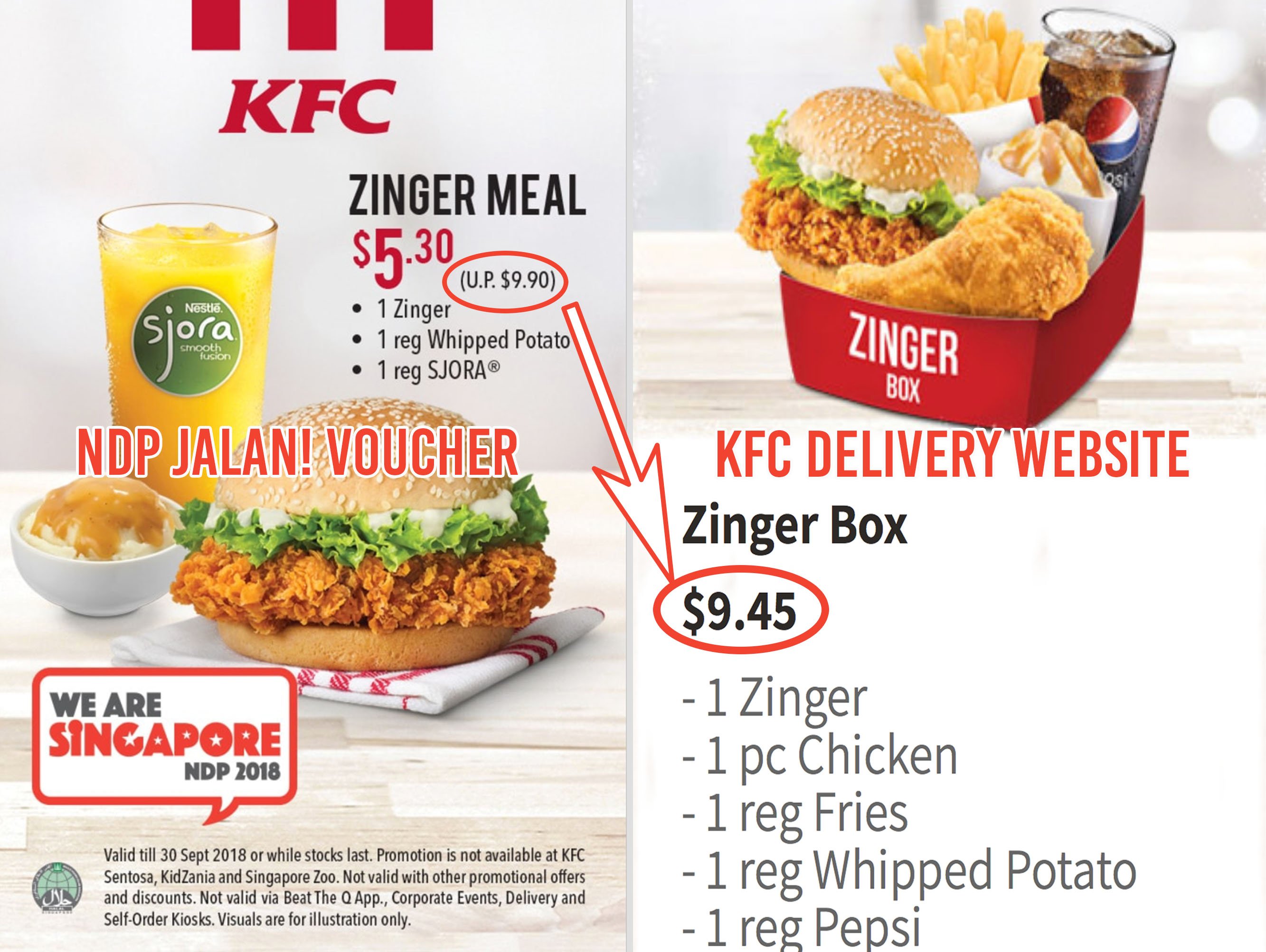 Doesn’t this mean that the 1 PC Chicken from the Zinger box has negative value?

We appreciate the symbolism of the price – given that Singapore turns 53 this year –  but at the same time, we can’t help but feel a tiny bit scammed.

There are three themes in the game, each available for 2 weeks:

Complete all the quests in a theme by each deadline and you stand a chance to win tickets for the actual 2018 NDP parade!

If you didn’t win the ballot for parade tickets, here’s another great chance to win yourself some.

Take note: only Singapore citizens and permanent residents are eligible for the ticket ballot.

But even if you’re not eligible, playing NDP Jalan! is a great way to learn more about Singapore and its history.

Overall, the app was definitely an innovative change from the usual NDP ticket ballot, and did a great job in allowing players to rediscover familiar places.

At some points during our journey, we even felt like we were on a Social Studies excursion.

Having said that, the game does have room for improvement. For one, the game certainly lacks a social touch.

There are no incentives to playing as a group and one can go on a solo adventure without interacting with anyone at all.

But nonetheless, kudos to the NDP team and the developers for coming up with such a creative app — 8/10 for me!

NDP Jalan! is available for free now on the App Store and Google Play Store.

What are you waiting for? Time to head out and Jalan for your chance to win NDP 2018 tickets!