NUS Student Dresses Up As Lion Mascot In Surprise Proposal

While some of us are skeptical about love, it’s good to know that some stories end with a happily ever after.

On Friday (19 Jul), NUS posted a video depicting a surprise proposal by student Zhang Shao Bo to his girlfriend Dr Lin Jing at her commencement ceremony. 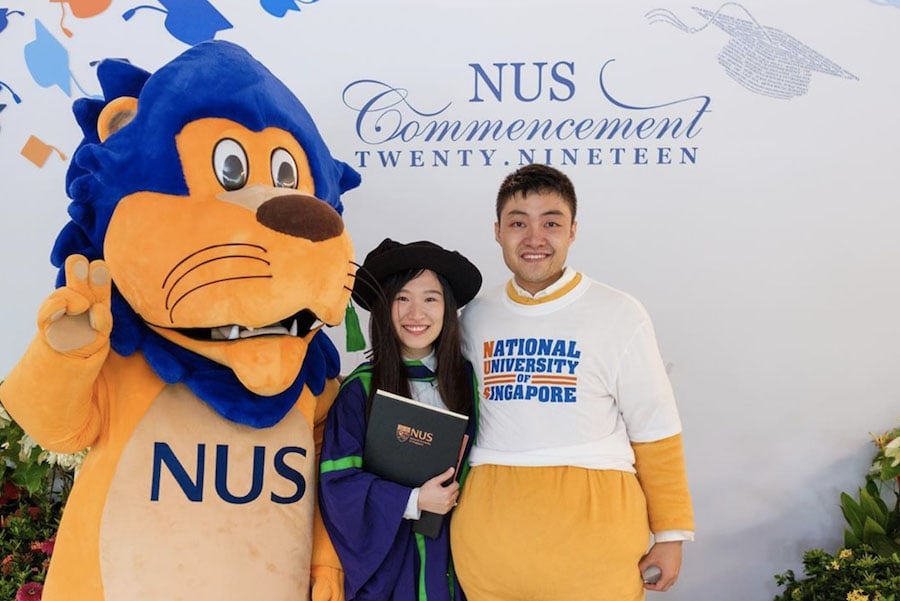 The heartwarming clip was also shared on the NUS Instagram account. Here’s a look at their lovely romance which culminated in a touching proposal.

Dressed up as school mascot to spring surprise proposal

Zhang plotted to surprise his girlfriend at her commencement ceremony, and received help ‘suiting up’ in a heavy lion suit for his upcoming proposal. 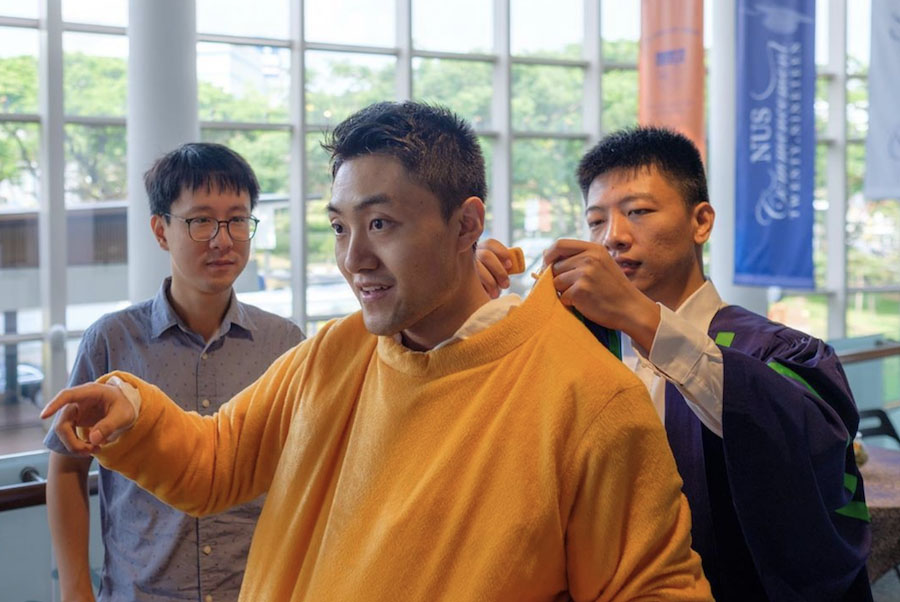 He was obviously in cahoots with the photographer who happily gave him a thumbs up before their plan commenced. 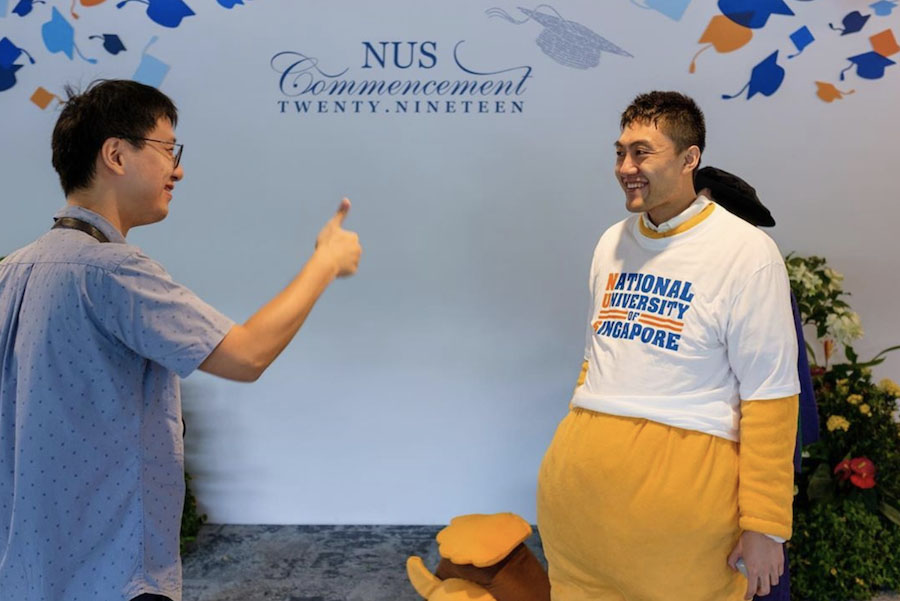 Her friends were in on the hilarious plan

Attaining a PhD is a big milestone that not many accomplish. So, when someone does complete it, they undoubtedly graduate with a bang.

This was the case for Dr Lin Jing — a recent graduate of the NUS Food Science and Technology Programme. Her friends ushered her to take a commemorative photo beside the mascot to mark the occasion. Meanwhile, her boyfriend was already in position. 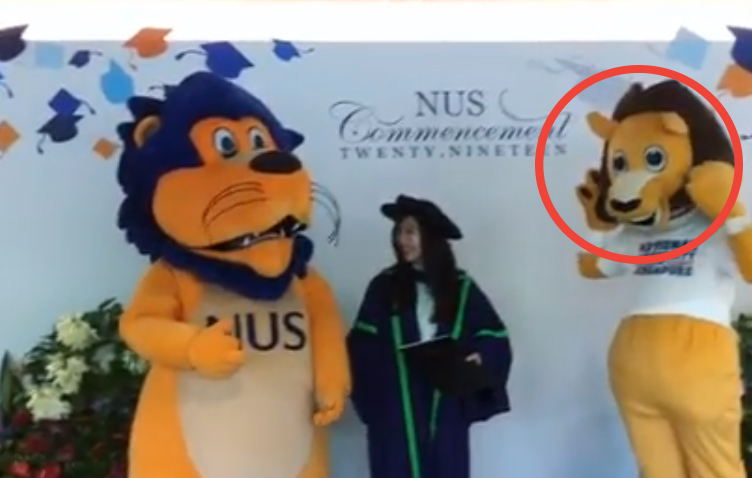 As she moved into the centre to get ready for the shot, she was surprised to find that the lion mascot was her boyfriend in disguise. 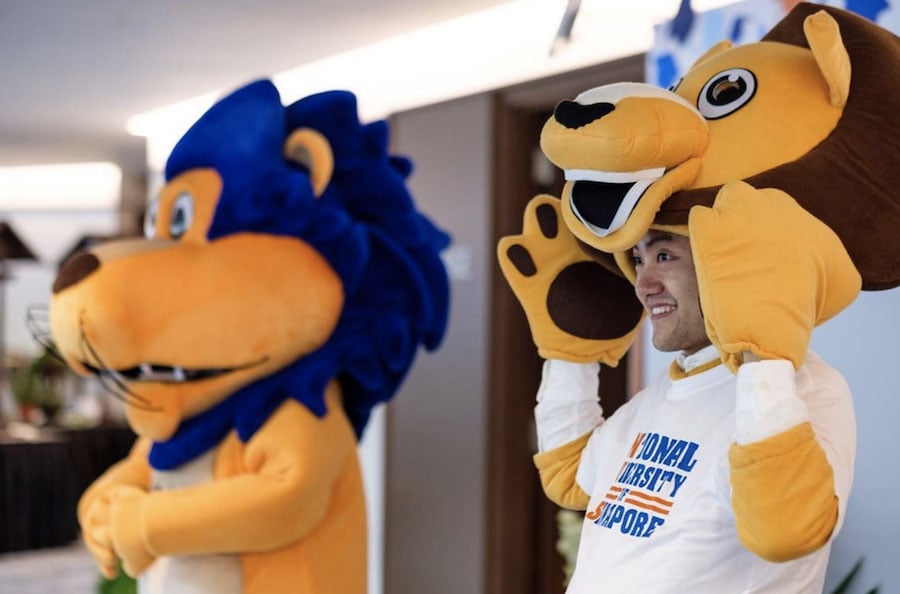 Like any woman in love, Lin had a big smile on her face upon seeing her boyfriend. 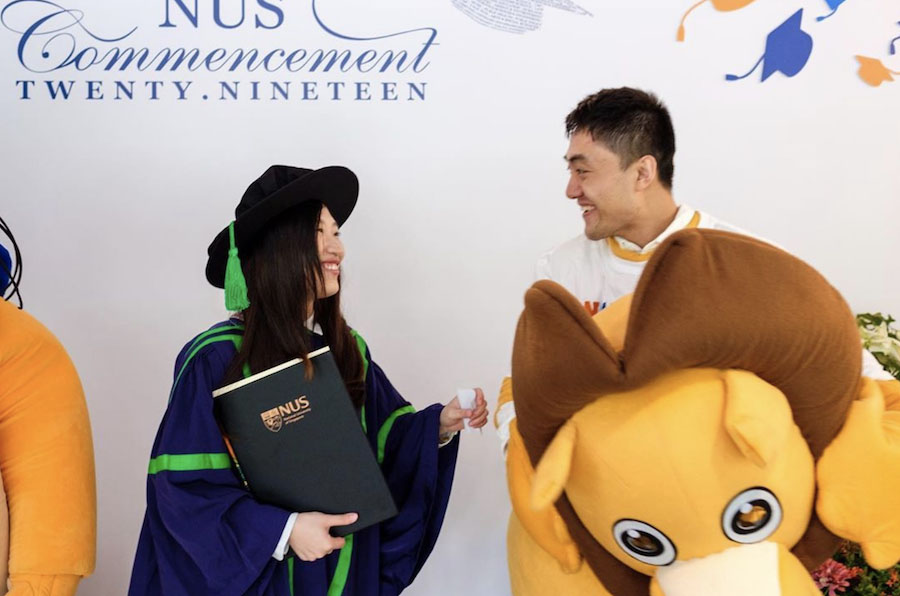 Other lion mascot as third wheel

As the couple hugged, the lion wingman walked away like a third wheel with friends. 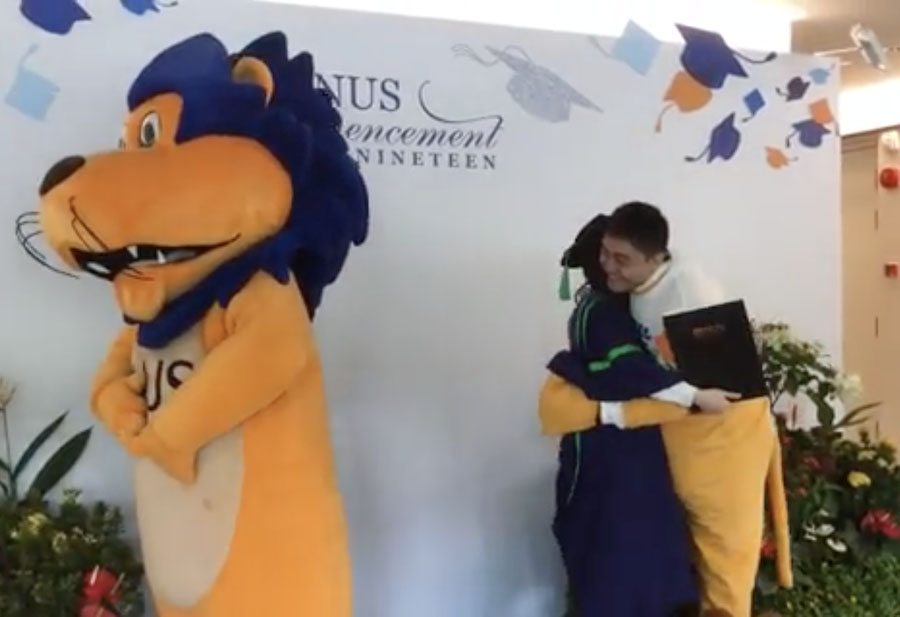 It turns out he was assigned to give the bouquet of flowers for Lin, but how could he hand it over when their moment was far from over? 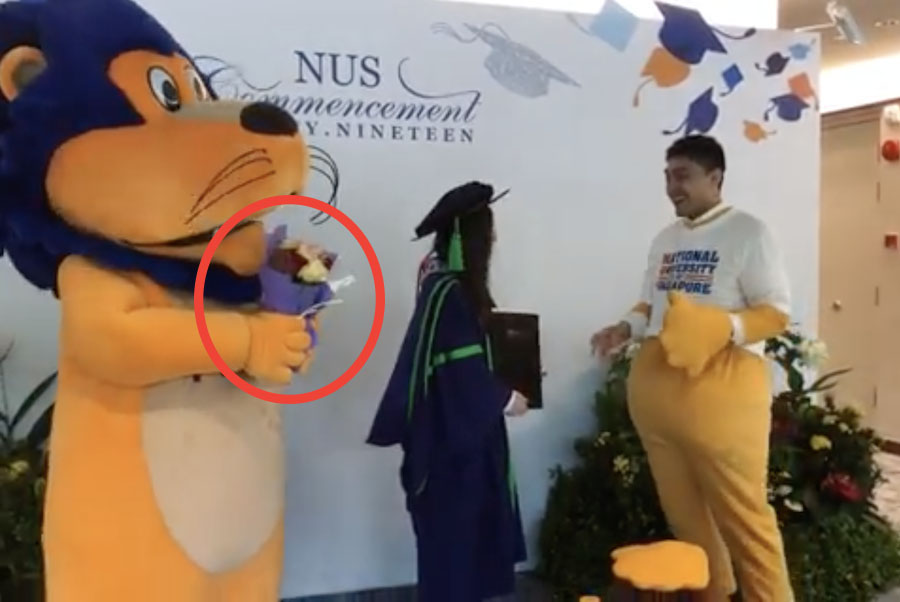 Fortunately, Zhang noticed his friend and grabbed the bouquet of flowers for his girlfriend. 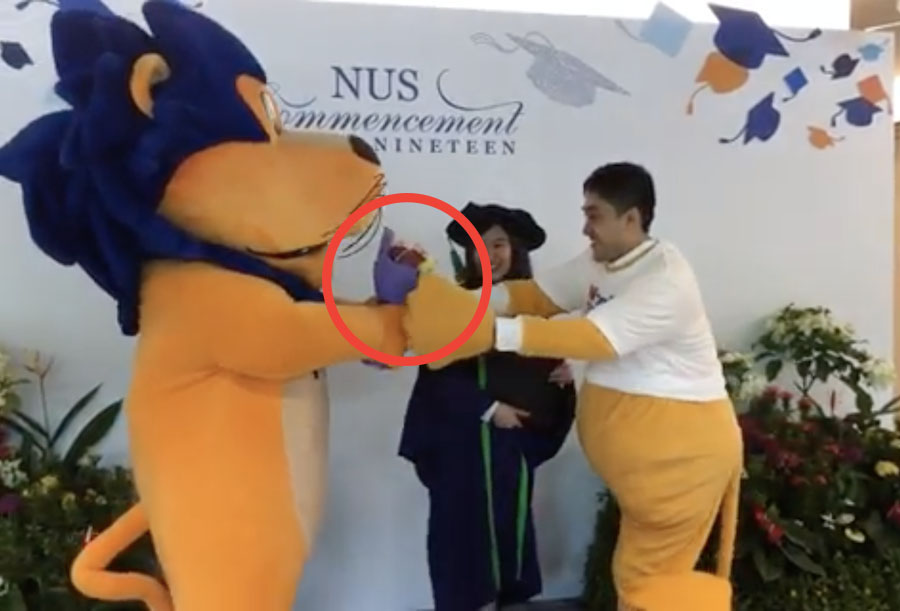 Gets down on one knee

But that wasn’t the end of the surprise. After revealing his identity, she was led to think that her boyfriend was only there to congratulate her — until he got down on one knee. Lin was overcome with so much emotion – so were we – once her boyfriend unveiled the engagement ring box. 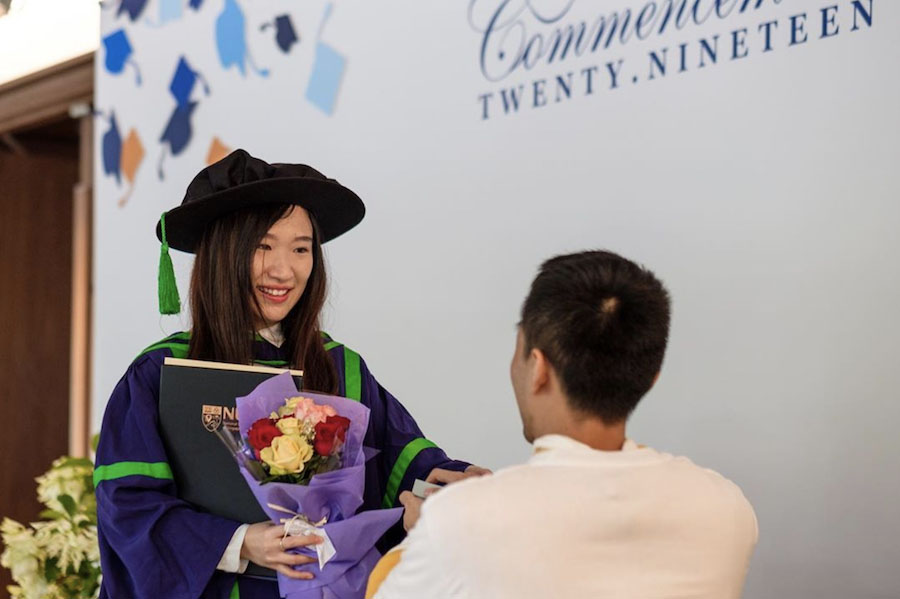 In the video, he tells her,

I love you. Will you marry me?

He sprung the question, a little nervously, and she said,

The audience cheered as the happy couple held each other tightly in an emotional scene. 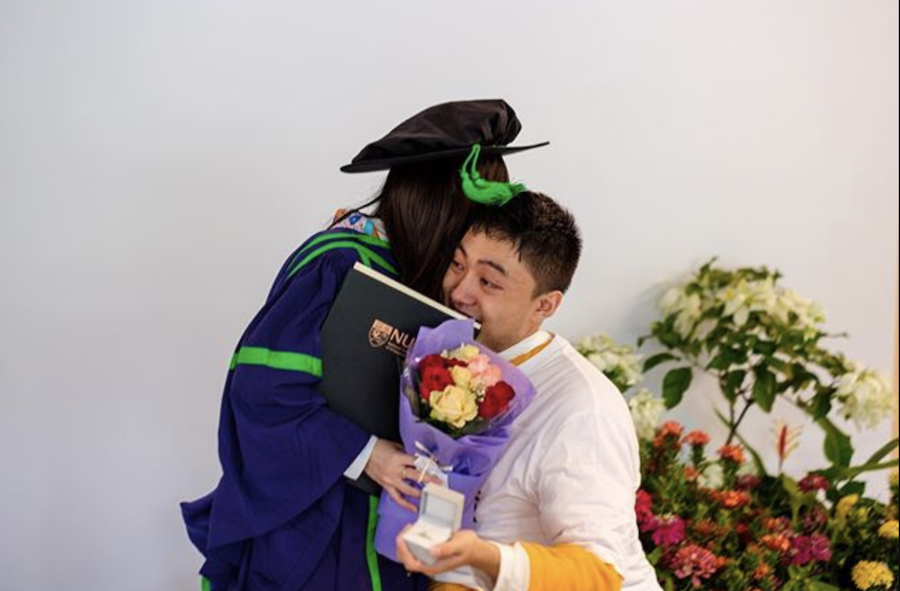 Many onlookers were thrilled to witness a successful proposal and gladly congratulated her. NUS sweethearts as both were PhD students

Turns out, the couple met five years ago at the NUS Sports and Recreation Centre, and they’ve been together ever since.

As both of them were pursuing their PhDs at NUS, we’re sure they were supportive of each other during the ardous paperchase.

To be more specific, Zhang is an NUS Mechanobiology Institute PhD student while Lin is now a NUS Food Science and Technology Programme Phd graduate.

Not all viral marriage proposal plans go off without a hitch, but we’re pleased to see that this one did.

The pair of PhD students are a power couple in the making.

Got any proposal stories to share? Or still hoping for a proposal? Let us know in the comments below.