20-Year-Old Speaks Up About Sexual Assault 2 Years Ago, Netizens On Twitter Rally To Her Support 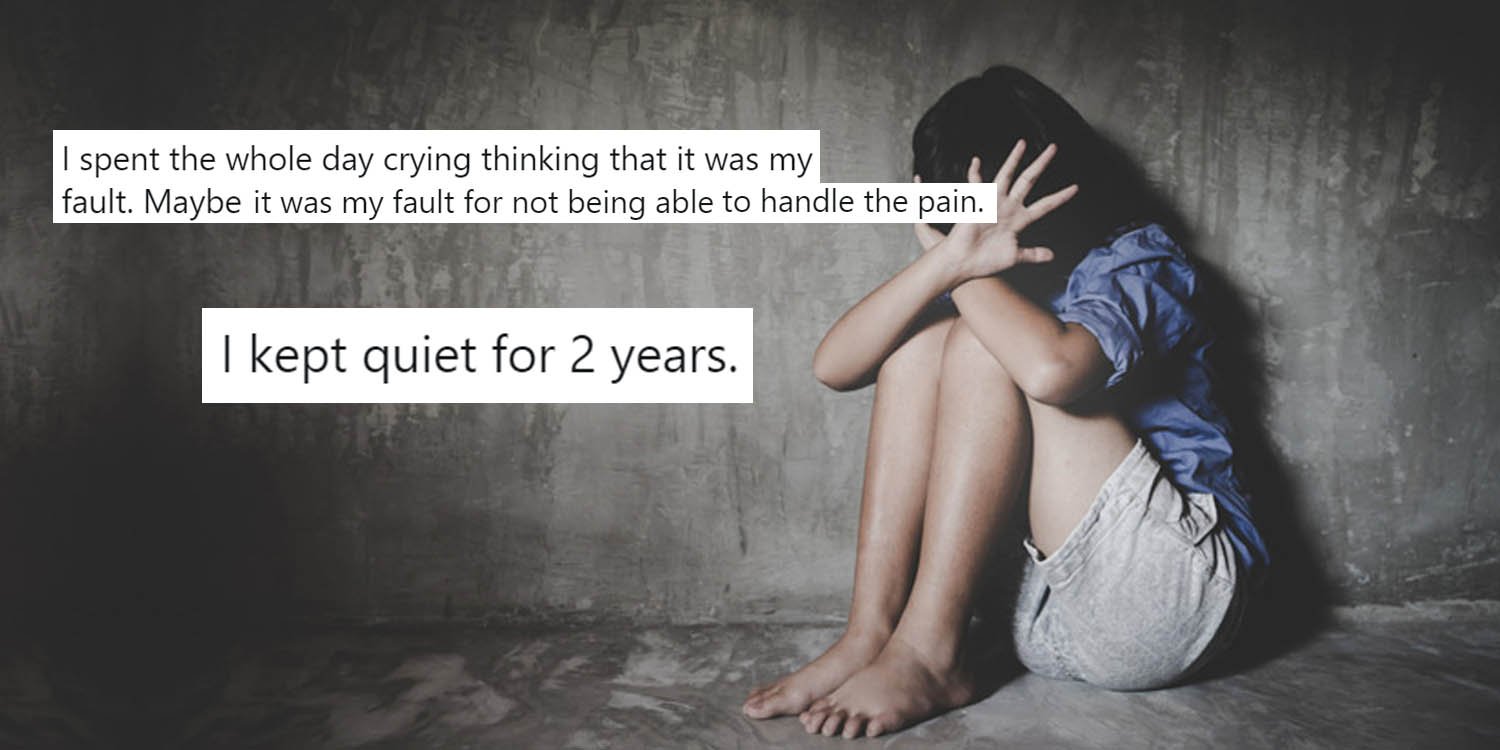 Multiple girls started speaking up against the same person too.

20-Year-Old Girl Speaks Up On Twitter About Sexual Assault, Culprit Now Under Investigation

Coming forward about sexual assault is not easy.

Imagine mustering the courage to point the finger at the person who took advantage of you when you were vulnerable, and having to prove the horror that happened.

Over the last 2 years, 20-year-old Ris – not her real name – had been keeping quiet about the nightmare she had to endure one fateful night.

She had repressed the trauma for what felt like the longest time. It was only until recently she decided it was time to call her sexual assailant out.

Ris, who is now based overseas, took to Twitter on Friday (5 Jun) and revealed details of her ordeal.

As the entire thread is rather lengthy, we summarise the incident below.

Trigger warning: Ris’ account contains graphic language & descriptions of abuse. If you have similar experiences, do proceed with caution, or simply close this tab.

Sex was consensual at first

Ris recounted that sex with the guy was consensual at first.

When he penetrated her, she realised that she was hurting and wanted him to stop. However, he had allegedly told her to just “f**king take it”, stressing that these were his exact words.

She started crying because she felt the pain was unbearable.

He told me to shut up countless of times and covered my mouth whilst I was crying.

When it was over, she had gone to the toilet to clean up and realised she was bleeding. She couldn’t go to work the next day.

Some time after, Ris claimed that the guy had concocted a series of untruths regarding the entire incident. 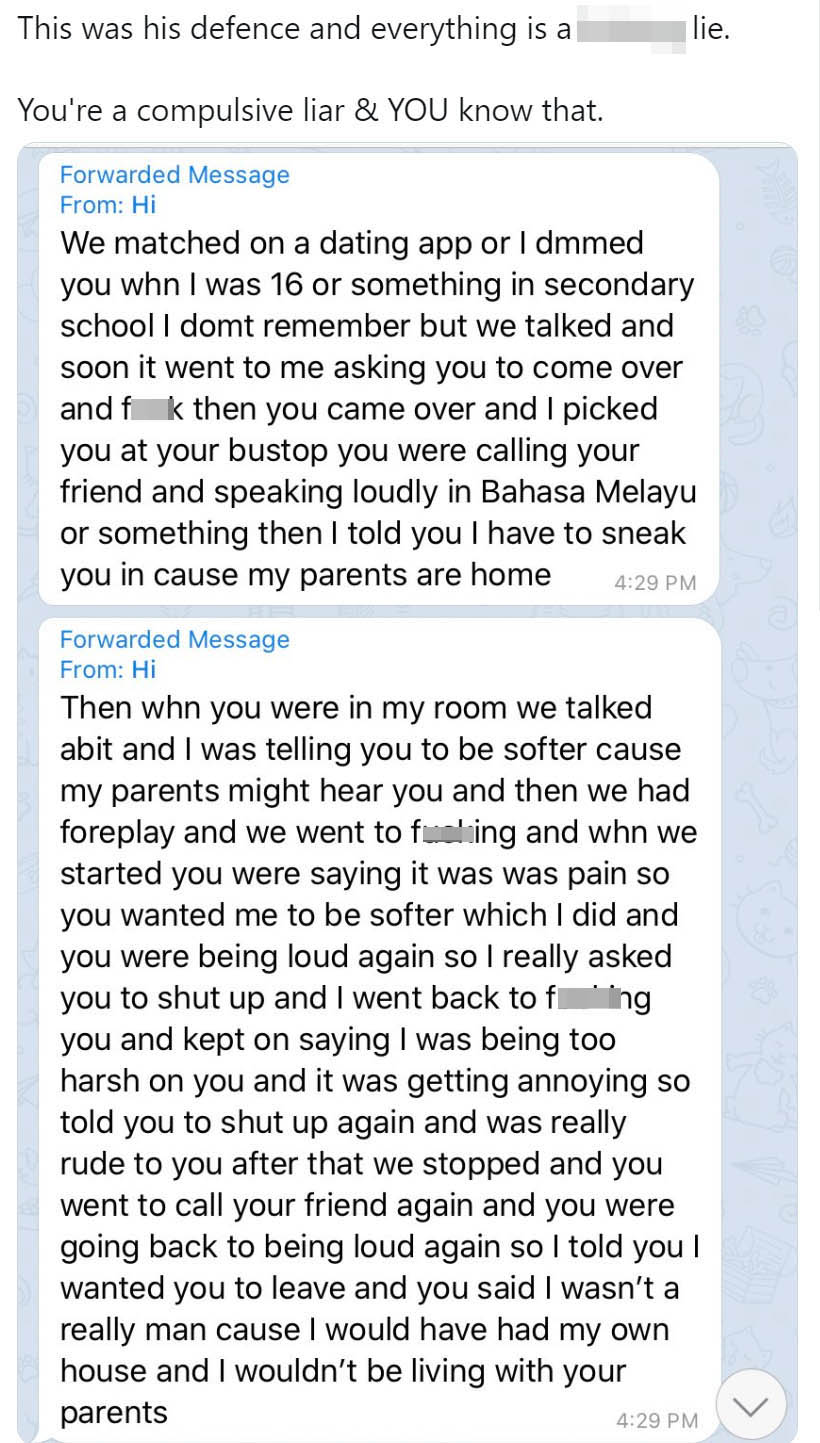 So in her thread, she decided to set the record straight:

Ris was evidently getting a bit emotional at this point in the thread, saying,

You never went easy on me at all. You f**ked me like you were trying to send me to hell and meet my creators.

Suffering the trauma alone was difficult. Ris had even sought help from a psychiatrist and a friend who validated her experience.

It took enough courage for me to talk to it to a psychiatrist and a friend about it and both of them validated that it was rape, so please don’t go around telling your friend/s I lied.

Other girls apparently reported guy for sexual harassment too

As it turns out, Ris’ tweet about the guy had garnered significant traction, prompting other girls to reach out to her.

They shared stories of how the same person had sexually harassed them as well. 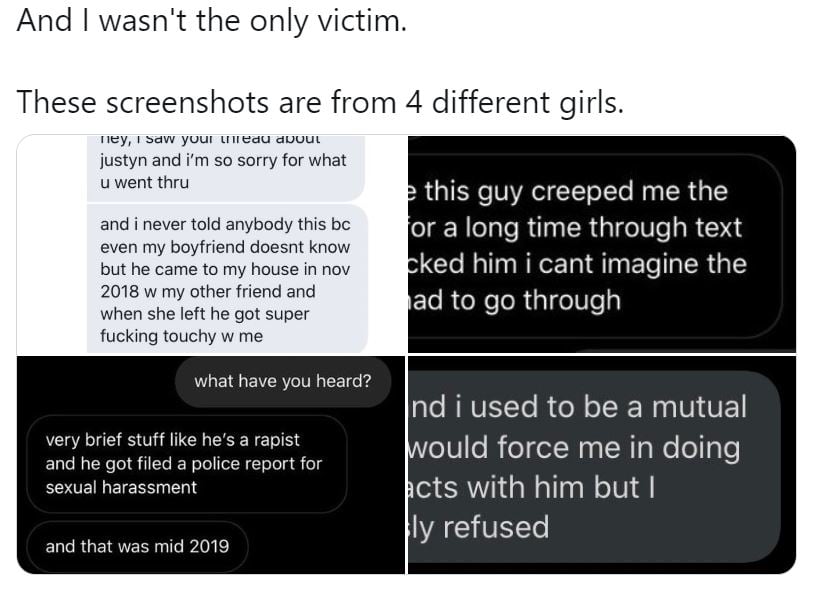 The following tweets after this were screenshots of conversations Ris had with more girls, who felt appalled and confided in her their own versions of the trauma.

Few of them even alleged that the guy had tried hooking up with them when they were about 14 or 15. In case you need a reminder, Singapore’s legal age of consent is 16. 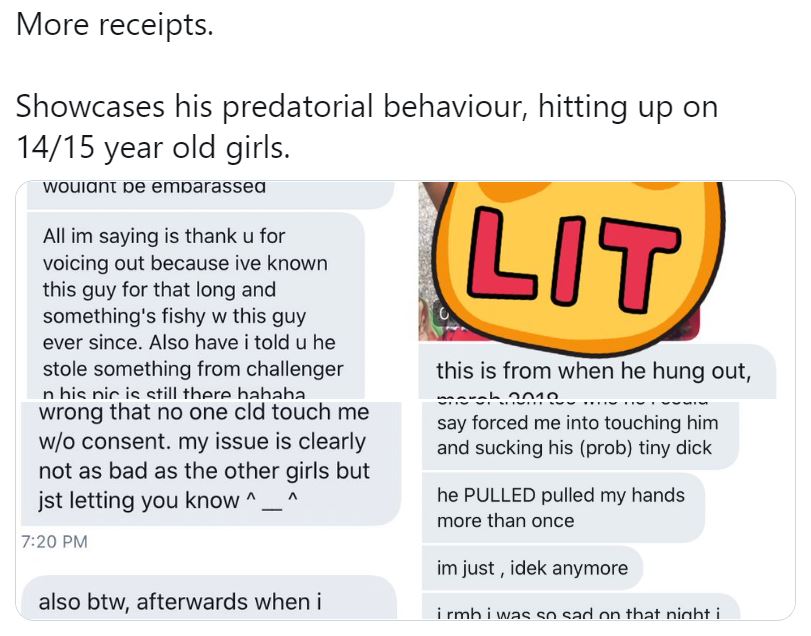 Within 24 hours after her first tweet had gone live, Ris had amassed around 35 sexual allegations against the same guy who took advantage of her, in her inbox.

Due to “overwhelming support” she received after speaking up, Ris decided it was time for her to lodge a police report.

If you have been wondering what prompted Ris to come forward only now, she had shared in an earlier tweet that she was triggered by his behaviour on Twitter.

She confessed that she was extremely afraid of him as well, even though he had followed her on Twitter way back then.

Other girls had lodged police report against culprit

Speaking to MS News, Ris said she planned to lodge a police report soon, but felt it was better to do so after getting a psychological evaluation first.

She also shared that she was informed that the culprit is now under investigation, after he had published a series of tweets admitting to her allegations. 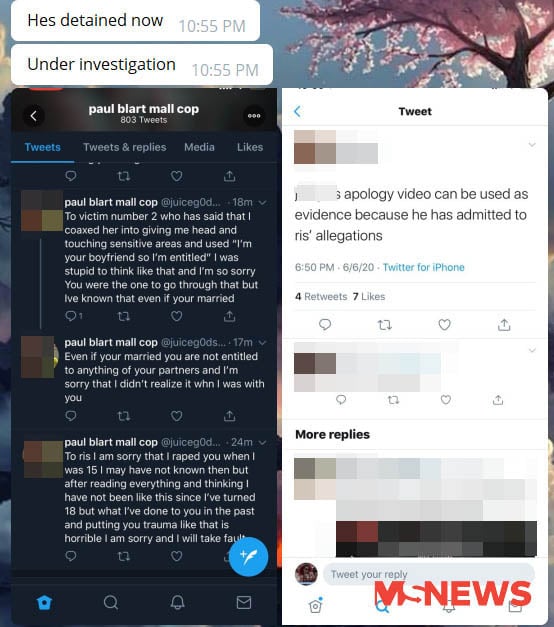 Screenshot of writer’s conversation with Ris

Ris said one of the victims’ investigating officer informed that the guy is now detained after multiple reports received in a day.

MS News has reached out to the Singapore Police Force (SPF) for comment.

Bravery to speak up motivated others to do the same

Ris’ courage in speaking up against her sexual assailant reminds us of the #MeToo movement, which has since became a rallying cry for sexual violence survivors around the world.

Her Twitter thread on sexual assault has encouraged many others to share their experiences. Not only that, it had motivated them to finally lodge a police report too.

Hopefully, police will get to the bottom of these allegations, and bring justice to the victims.

If you are a victim of sexual assault or rape, you can call AWARE’s Sexual Assault Care Centre at 6779 0282. They are open 10am-10pm from Mondays to Fridays.

We hope that Ris’ brave account empowers more survivors to step forward and let their stories be heard, no matter how long it has been.

Featured image adapted from The Week.