Update (19 Feb, 5.52pm): HDB has responded to MS News’ queries, clarifying that Ms Koh has applied for a rental flat on 13 Feb 2020. You can read the rest of the response below.

While the government has schemes to help the less fortunate, the bureaucracy of applying for help leads many to fall through the cracks.

Single mother Ms Koh is one of them. With a monthly income of $2,000, she was told she had a slim chance of getting a rental flat and after years of trying and failing, she shared her woes on Facebook.

Social services did not help her growing up

Ms Koh had a rocky childhood. When she was 5, her father was stabbed to death in front of her.

Her mother was absent because she was incarcerated when Ms Koh turned 12. She was sent to live with her aunt, who allegedly ended up abusing her.

Back then, social services did not assist her and she had to run away from home “to escape the pain, only to be looked upon like a juvenile.”

She was then put into a home for 3 years until her mother was released.

Asked for help to apply for rental flat several times

Sadly, that was not the end of her woeful story — Ms Koh’s mum was incarcerated again in 2015.

As such, she wrote in to HDB and various ministers for help over the next year and a half but faced constant rejection.

HDB responded asking for documents, but after she replied, they rejected her application citing her income and her family’s incarcerations.

She even emailed PM Lee Hsien Loong for help, but of course there was no reply.

Things seemed to look up for Ms Koh in 2016 when she got married and had 2 children. However, she claimed that she was trapped in an unhappy marriage.

Despite the terrible situation, she decided to stay — for her kids. She shared,

It was no longer just about me, it’s ME AND MY KIDS. I took years to convince myself for a better future for me and my kids, I had to be strong.

During this time, Fei Yue Family Service Centre allegedly did not do anything apart from referring them to homes and shelters.

Moved out of husband’s house in Nov 2019, but kicked out of rented place

She wrote to one Muralli, whom we believe to be MP Murali Pillai, who said “there is nothing he can do as HDB rules are rules”. Hence, she had to live in another rented place.

However, on 11 Feb, she was kicked out of her rented place with nowhere to go.

Fei Yue arranged for her and her kids to stay in a home in Serangoon, the “only place” that could take them in.

Unfortunately, it’s not a feasible arrangement since her kids are schooling at Tradehub 21 – that’s in Jurong East – and she works in Henderson.

Her kids would have to wake up early for her to drop them off at school and wait until she ends work at 6pm to pick them up, which’d only add to her troubles.

Bureaucracy a constant obstacle in her search for HDB rental flat

She isn’t eligible for a HDB flat as her income is above the cap of $1,500 and isn’t officially divorced.

Ms Koh argued in her Facebook post that there was no way $2,000 would be enough for 3 people after CPF deductions and rent.

You all built rental flats only to turn down me and my kids because I am earning $2,000?  Because YOU THINK that I can afford rental from the open market?

Ms Koh did not know what they expected her to do while she waited for the divorce to be finalised — the open market is not feasible as it is an unstable accommodation. 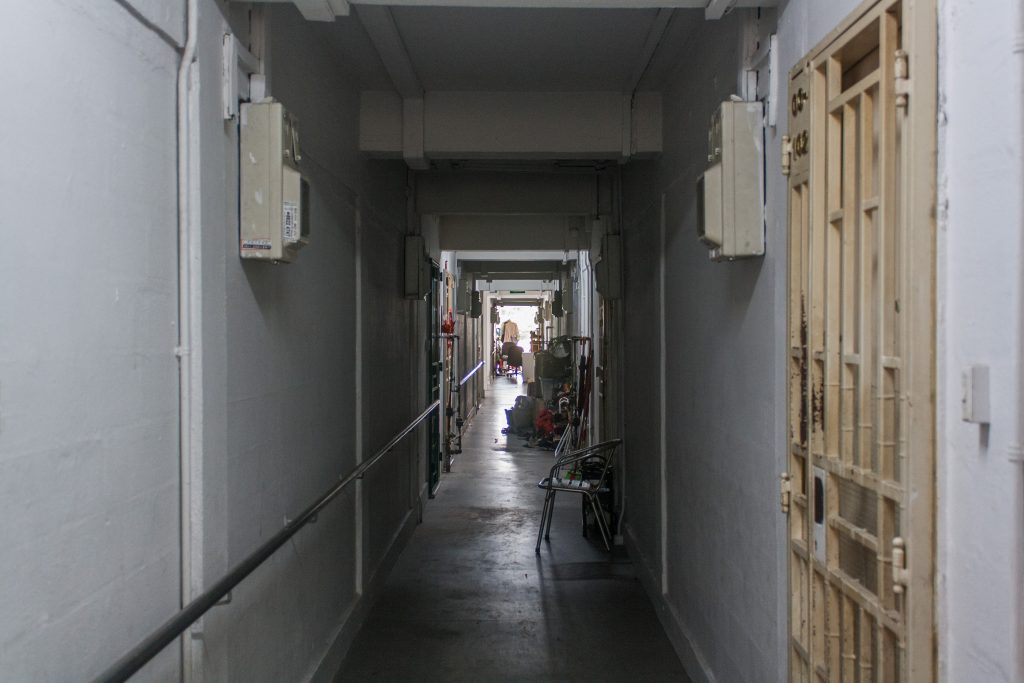 It was difficult for her to weigh leaving an abusive marriage against staying so that her children have a home. Ms Koh adds that this is why many women stay in a bad marriage — many don’t know where they can turn to.

The government bodies portray a colourful rainbow… turn down a single mother with 2 kids pushing them to stay in homes instead of just renting her a 2 room flat.

A HDB spokesperson told MS News that they previously applied for a rental flat with her mother and brother in 2015 and 2016. However, they were not accepted as co-applicants since they were incarcerated then.

When Ms Koh expressed interest in buying a flat with her mother, HDB advised her to submit the necessary documents for the application.

Yet, they did not receive any reply from Ms Koh after that.

They are processing the application submitted on 13 Feb and will inform her of the outcome as soon as possible.

In addition, they are prepared to consider her request due to her circumstances. They added that HDB “will continue to assess requests for rental housing from parties in financial hardship who need help to tide over a protracted or acrimonious divorce”.

Hopefully she can find stable lodging

Ms Koh’s story is likely to be one out of many in Singapore. It’s sad to see that many of our fellow citizens are struggling to survive, despite our country’s prosperity.

There are still many who fall through the cracks, especially single mothers. The system can unknowingly add many layers of stress for them.

In the meantime, we’re keeping our fingers crossed that Ms Koh can get the help she needs soon.