Today (2 December), Transport Minister Khaw Boon Wan announced via a blog post on the Official Ministry of Transport blog that he may have just solved the problem of nagging transport issue that have disrupted that lives of Singaporeans for years. 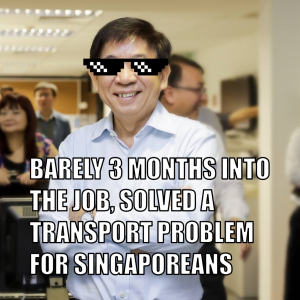 The Co-ordinating Minister for Infrastructure wrote that at least one billion dollars will be spent to procure 99 new Mass Rapid Transit (MRT) trains for Singapore’s train network.

According to Minister Khaw, this will be a “worthy investment,” since the new trains will allow the transport system to be more cost-effective in the long run and will result in higher rail reliability.

We break down the concept for you on how the purchase of these trains can solve the frustrating issue of train breakdowns.

According to  the Transport Minister, the new trains will “have improved propulsion systems, and more reliable and durable AC synchronous motors which require less maintenance” as well as “electric train doors that need lower maintenance and will eliminate air leakage problems”.

Further, the doors of the new trains “will be logged and stored for the maintenance crew to pre-empt door faults before they occur”.

Basically, Minister Khaw believes that the addition of these new trains will result in a dip of disruptions since half of past breakdowns that occurred on the North-South and East-West Lines (NSEWL) were due to faults in the train itself.

Therefore, the procurement of new trains with new and improved features will enhance the overall performance of the rail network.

A New Dawn For Singapore’s Transport?

This piece of news could very well signal the beginning of Minister Khaw’s reign as the Transport Minister to solve Singapore’s transport woes.

Minister Khaw did not offer any apology of any sorts regarding the North-South Line breakdown last week. Instead he bought new trains to show Singapore that he is on the job. 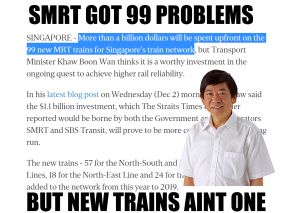 This man doesn’t deal with apologies. No, he gets right to work.

Featured image via 154thMedia2013
With reference to The Straits Times, Ministry of Transport WordPress