A car suddenly cut into the bus captain's lane.

Having a loved one get involved in an accident is a painful experience. It is, especially when the circumstances surrounding the incident remain unclear.

On Wednesday (8 Sep), a lady shared on Facebook that her dad met an accident when he was on his way home. He has been hospitalised with multiple injuries after allegedly falling when the bus he was on did an emergency brake. 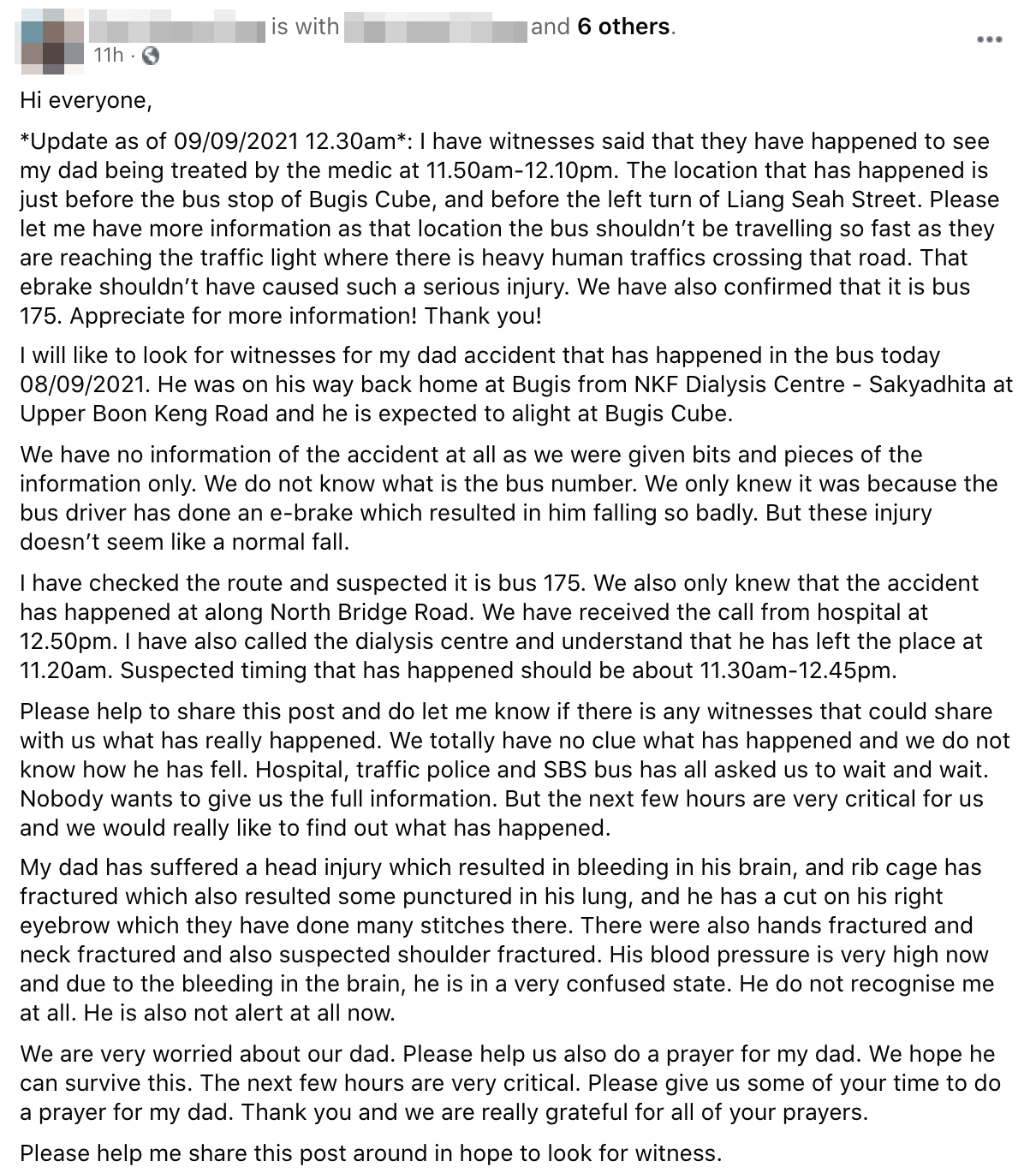 The lady is appealing for witnesses of the incident that occurred on bus service 175. SBS Transit said the case is now under investigation by the traffic police.

On Wednesday (8 Sep), the lady’s father Mr Siah was on board Bus 175 on his way home from an NKF Dialysis Centre at Upper Boon Keng Road.

He was supposed to alight at a bus stop outside Bugis Cube mall. 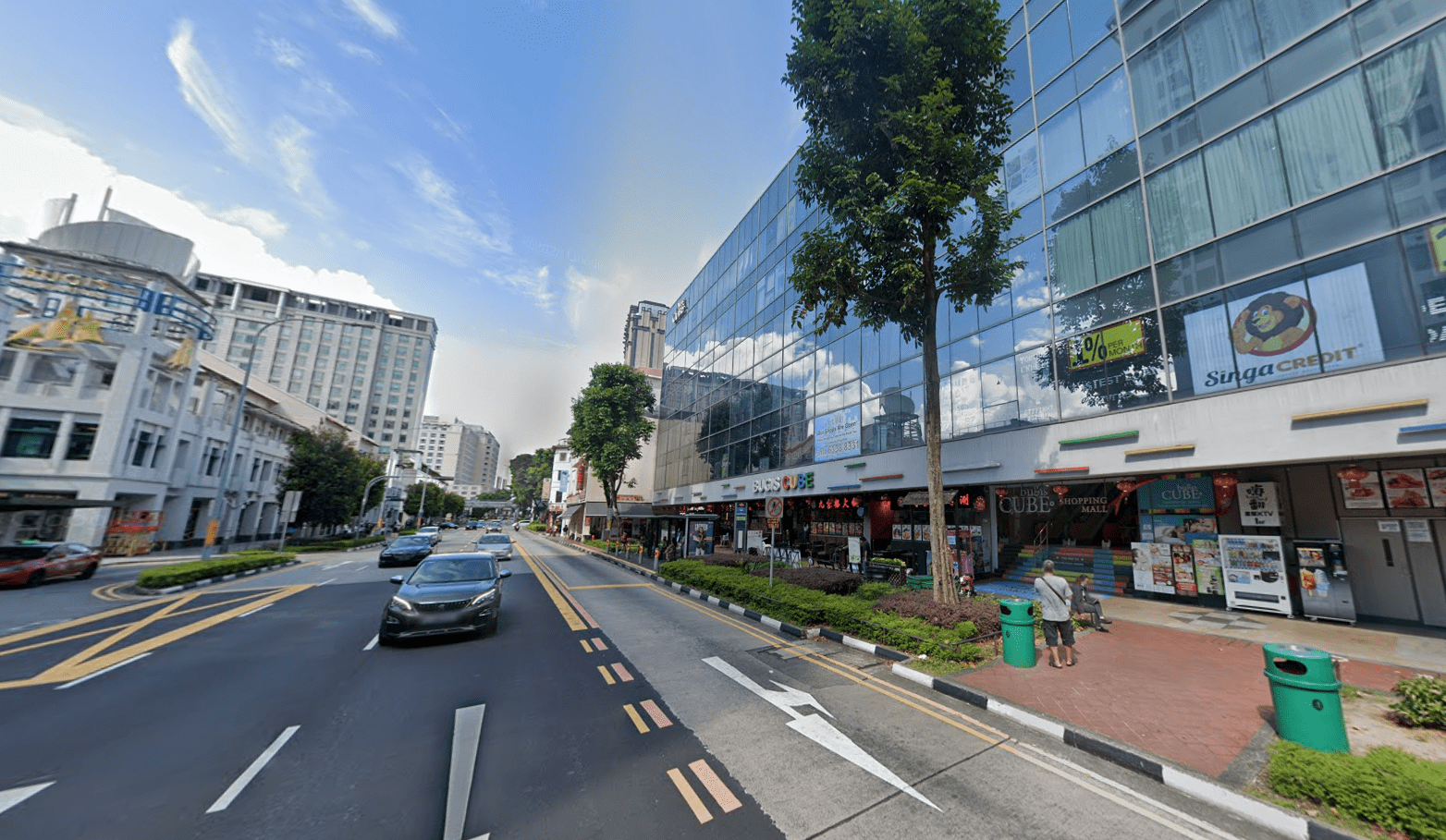 However, along North Bridge Road, the bus had reportedly braked hard, causing him to fall.

According to witnesses, the elderly man was seen being treated by paramedics right before the Bugis Cube bus stop, before Liang Seah Street, between 11.50am and 12.10pm.

At 12.50pm, the family received a call from the hospital, notifying them of the accident.

The dialysis centre shared that he had left the centre at 11.20am. The accident likely occurred between 11.30am and 12.45pm.

The elderly man sustained serious injuries. In her Facebook post, his daughter said he had a brain bleed, fractured ribs that punctured a lung, and a cut requiring stitches above his eyebrow.

Besides that, his hands and neck were fractured. His shoulder, too, suffered a suspected fracture. Currently, the brain bleed is causing him to have high blood pressure.

The daughter added that her father is in a confused state and does not recognise her at all. She is currently appealing for witnesses.

Responding to MS News‘ queries, SBS Transit corporate communications senior vice president Ms Tammy Tan said they are sorry to learn of the man’s injuries when on board Service 175 on 8 Sep.

They’re currently in touch with his family. Here’s the rest of the statement in full:

Based on our CCTV footage, our bus was travelling straight along North Bridge Road when a car in the next lane suddenly cut into our bus’ lane and brushed against its front.

To avoid an accident, the bus captain immediately applied the emergency brakes. At this same time, Mr Siah, who was seated right on the first seat near the front door, had just stood up from his seat in preparation to alight.

He lost his footing as a result of this and was thrown forward. Our bus captain immediately stopped the bus and contacted our operations control centre, which summoned an ambulance that conveyed Mr Siah to the hospital.

We have shared the CCTV footage with the traffic police, who are looking into the incident. Our thoughts are with Mr Siah for a full recovery.

We can’t imagine how difficult it is for the family to look after their father whilst seeking answers about the accident.

Hopefully, their efforts will pay off, and they will gain the closure they need. MS News wishes the elderly man a speedy recovery ahead.