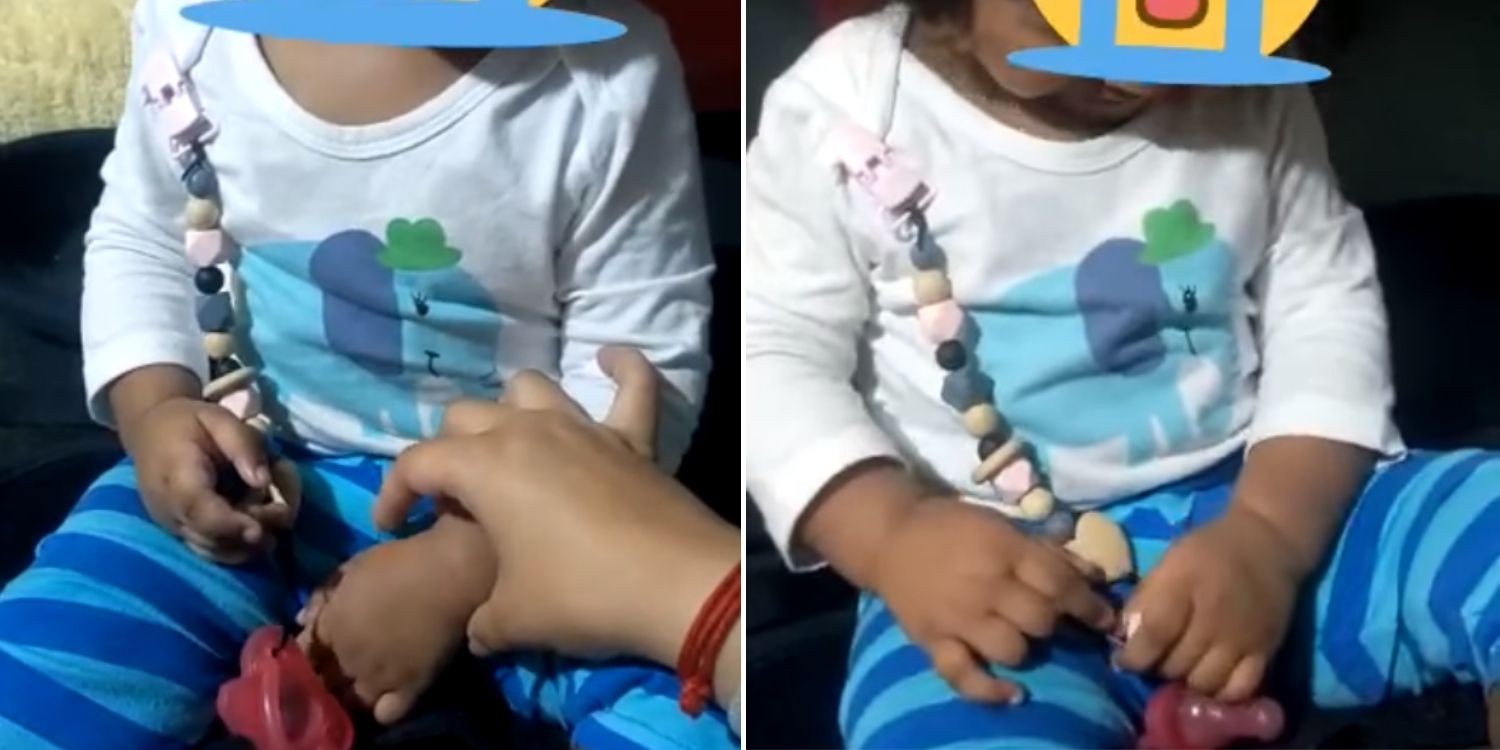 New parents who have to hustle at work often entrust their toddlers to the supervision of childcare centres every day.

So it’s shocking to hear allegations of mistreatment at their premises, as young children, especially infants and toddlers, are most vulnerable.

On Tuesday (12 Jan), a mother shared on Facebook that her 16-month-old daughter was allegedly mistreated by 2 teachers at PCF Sparkletots. 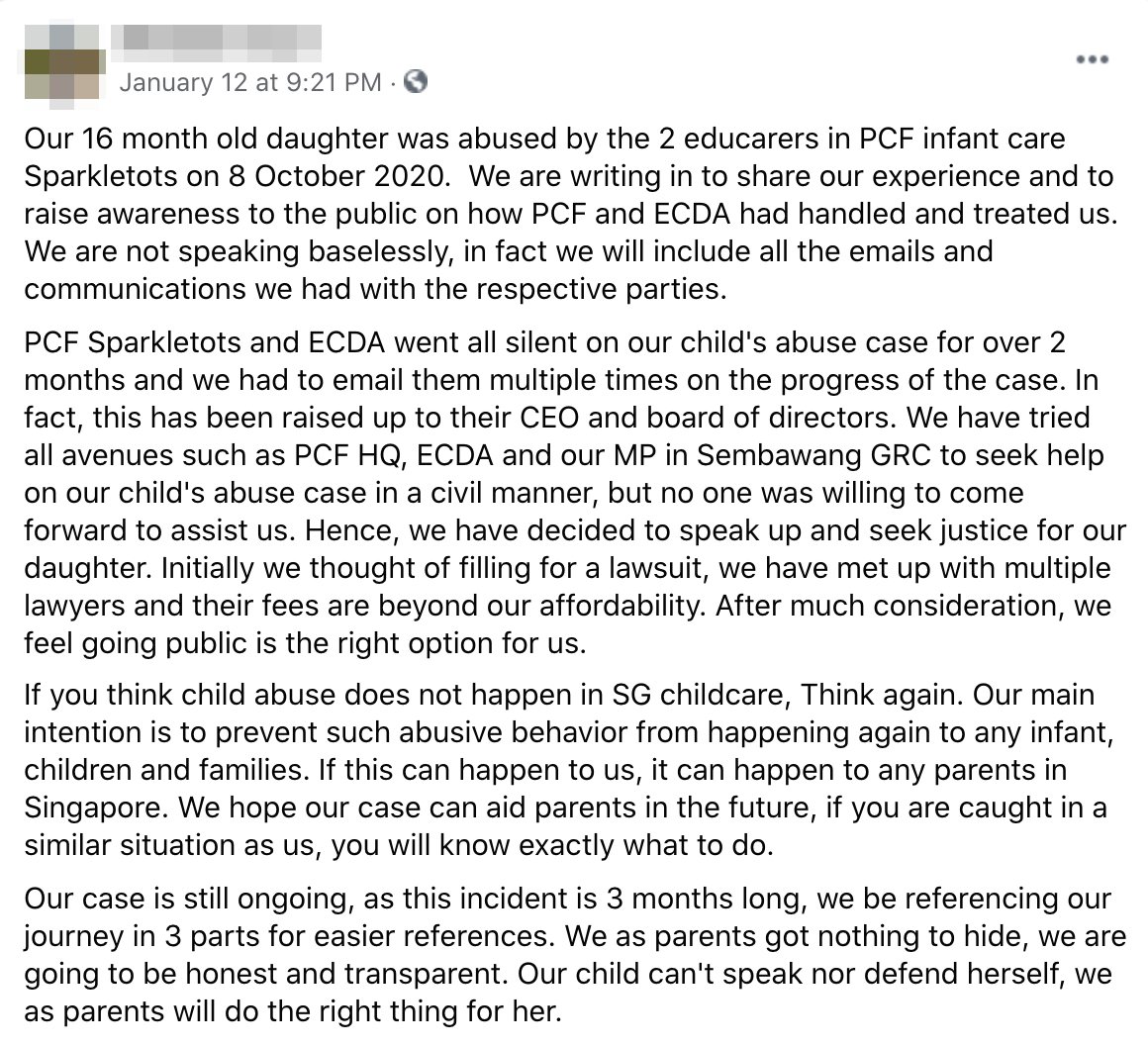 She alleged that her daughter suffered a pulled elbow. But the mother said she was more appalled at how the incident was handled.

After an investigation by Early Childhood Development Agency (ECDA), the 2 teachers have been suspended.

On 8 Oct last year, the mother found her 1-year-old crying when she arrived at PCF Sparkletots.

She initially dismissed it as her simply being cranky after a nap. 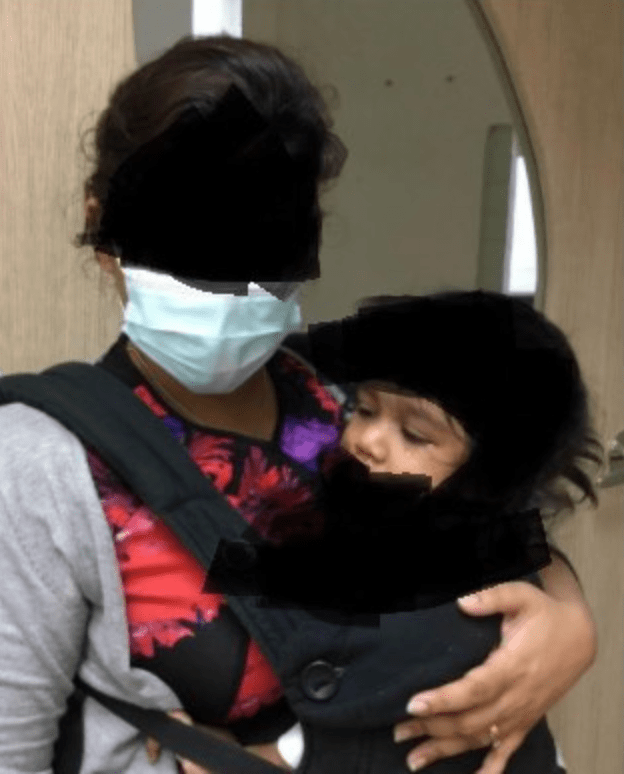 However, she soon found something was amiss when she couldn’t stop crying.

The mother realised that she couldn’t lift her left arm up and would cry whenever she tried lifting it. 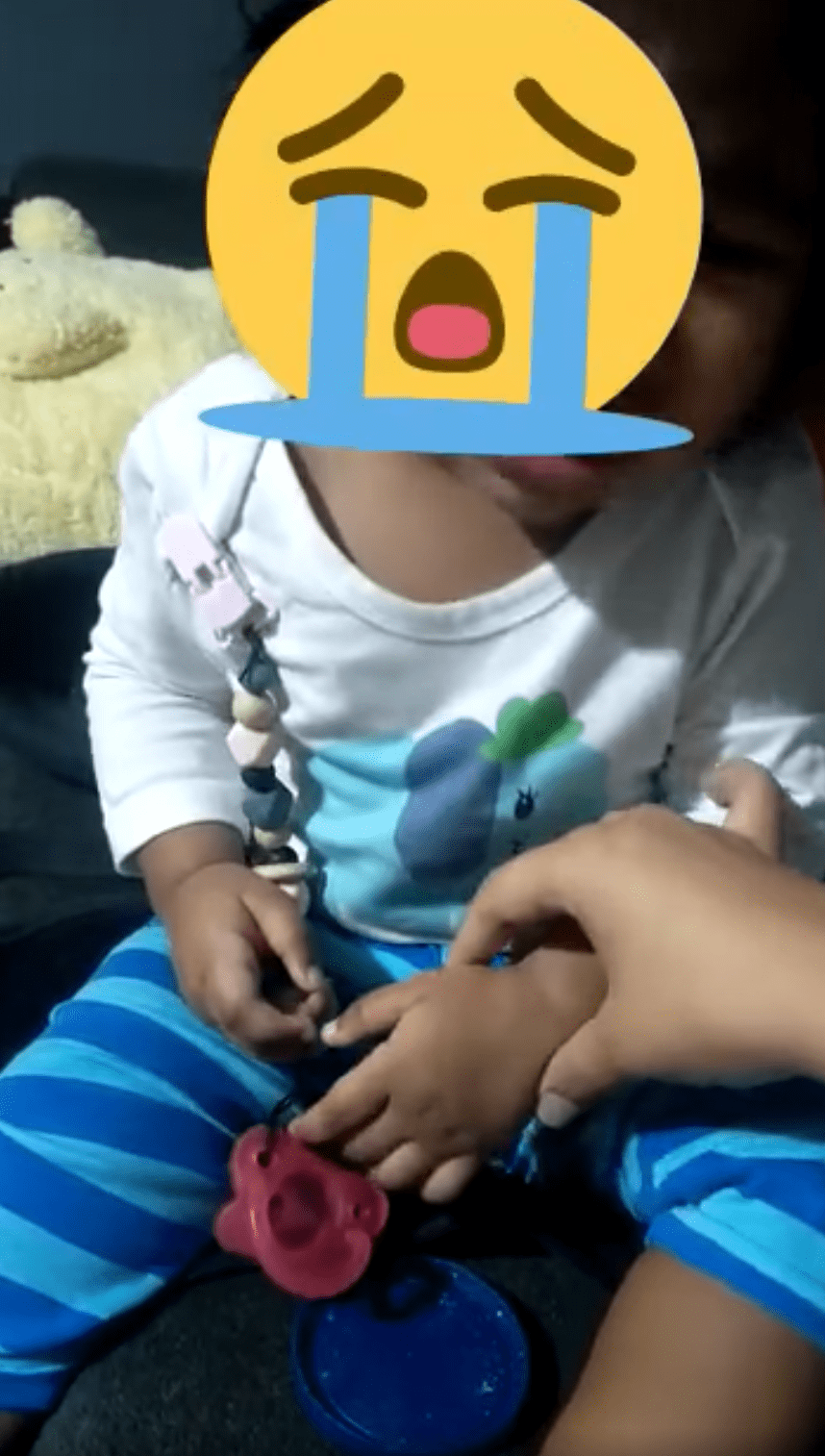 She contacted one of the teachers to ask about the events of the day, saying that there was something wrong with her daughter’s left hand and she wouldn’t stop crying.

Oh yeah, when I woke her up, I saw she didn’t give me her hand.

She then advised the mother to seek medical help, saying it can be claimed.

The child was rushed to National University Hospital where they found she had a pulled elbow. 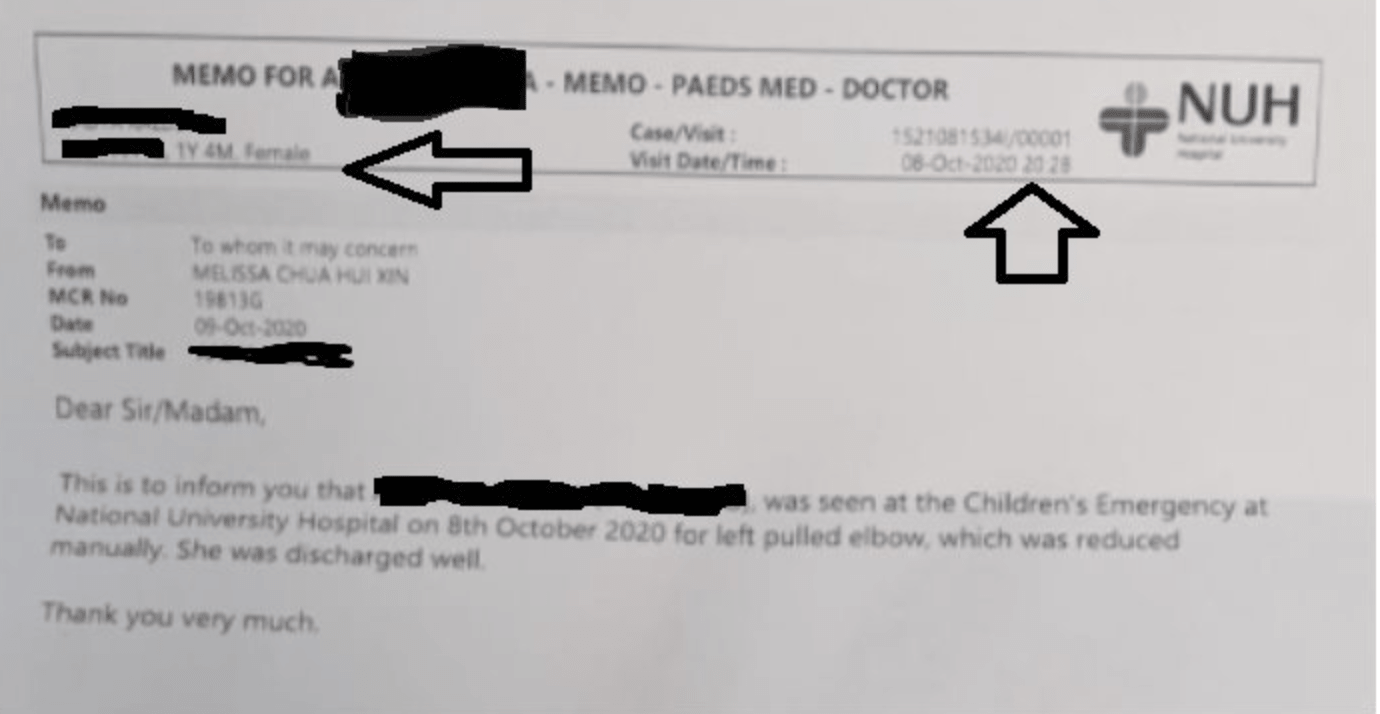 Later, the doctor mentioned that a “brute amount of force” had caused it.

Subsequently, the mother met with the preschool’s stand-in principal.

The stand-in principal informed her the teacher was remorseful about pulling on the child’s elbow with one hand when waking her from her nap.

Mother said request to see CCTV denied due to protocol

The mother then requested to see the CCTV, but she was turned down as protocol mandated that a formal request needed to be submitted. The stand-in principal said she would email the CCTV request form later that evening.

After the discussion ended, 2 teachers – including the one responsible for pulling the child’s elbow – came over to apologise.

The mother said the teacher made a promise to the stand-in principal that she would use both hands to pick the child up from now on.

The mother graciously accepted the teacher’s apologies, but reminded them that it was important to inform parents about any injuries.

After returning home, the mother noted that they didn’t receive the email that night.

The next morning, the mother was told to go down to the preschool to collect the CCTV request form.

There, the stand-in principal explained that the teacher involved was unaware that her actions of pulling the child’s elbow could have caused dislocation.

The principal allegedly remarked that such injuries were “common” among children, causing the mother to feel as though they were treating the incident lightly.

Later on, the mother sent in the CCTV form and also wrote in to PCF’s headquarters and ECDA for assistance.

However, she claims after 2 months, there was still no progress on the case. Thus, she took to social media to share about it.

In response to the incident, PCF assistant chief executive officer Tan Lee Jee told MS News that safety of all children at their childcare centres was top priority. 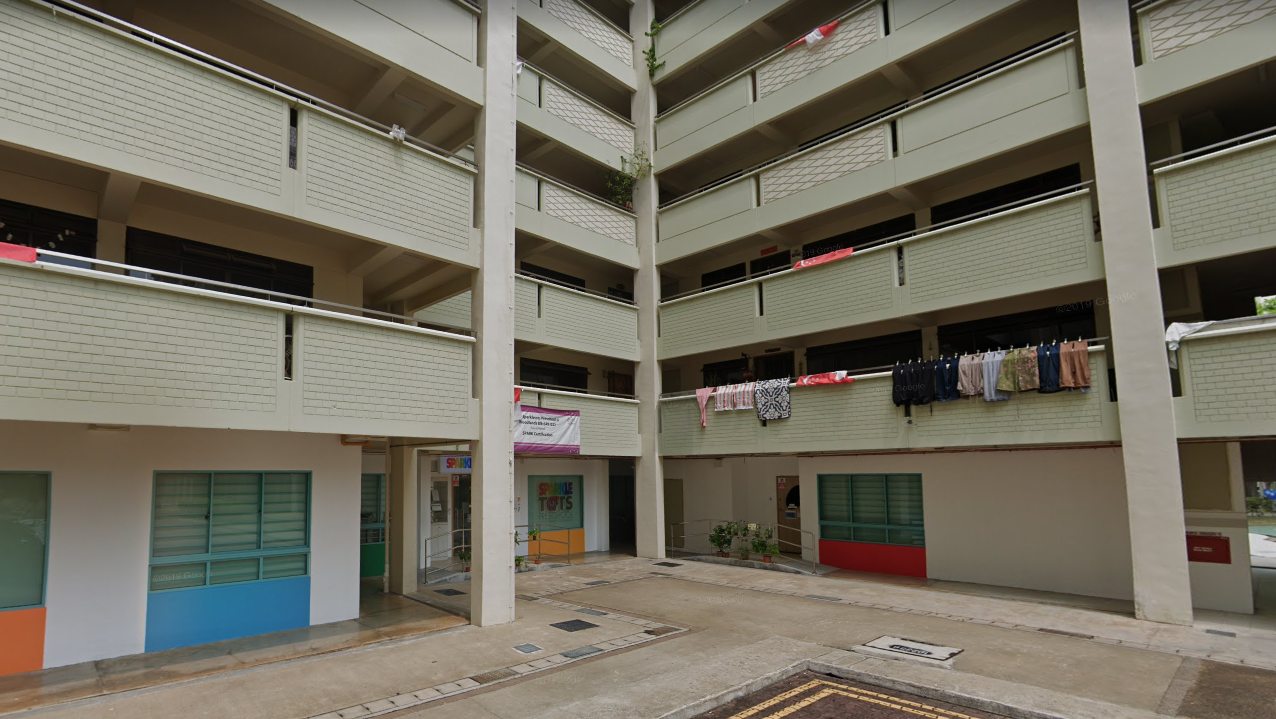 Both PCF and ECDA had conducted investigations, and found that the child suffered from a pulled elbow due to inappropriate handling by the teacher.

PCF as well as the teachers apologised, saying they deeply regretted it.

Below is their statement in full:

These investigations concluded that the child had likely sustained her injury, (a pulled elbow) due to inappropriate handling by the infant educarer.

We are very sorry, and deeply regret this.

ECDA has penalised PCF, and the two employees involved were suspended. They are now undergoing a fundamental review to assess their suitability to work in this field. Further disciplinary action may be taken against them if they fail to meet the expected standards.

The parents have decided that their child should remain in the same centre with us. We thank them for their trust and will continue to support the child in her learning and development.

The parents of the child have filed a police report and we will fully cooperate with the authorities on the investigations.

Caring for young and vulnerable children is a heavy responsibility.

While it can be a hectic and stressful job at times, the children should not be mistreated in any case.

We hope the investigations will get to the bottom of the incident and the parents will be able to finally put this chapter behind them. We also hope that the toddler has recovered from her injury since.