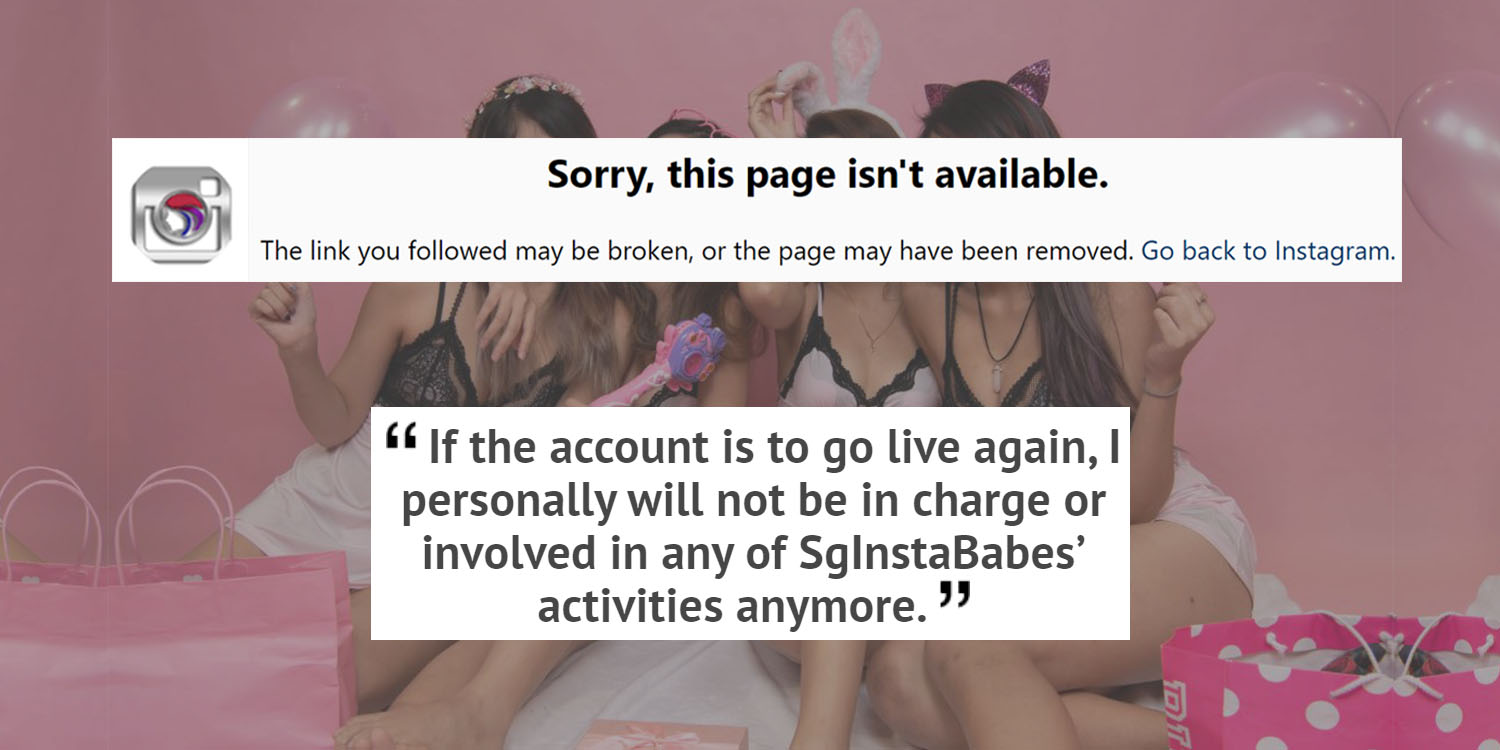 SgInstaBabes On Hiatus For Now

Beleaguered founder of SgInstaBabes has announced his intentions to withdraw from the page he has created.

Mr Lai Wee Kiat shared with Marketing Interactive on Wednesday (29 Aug) that he will be “taking a break from social media”, while the platform undergoes a “revival and revamp”.

He added that if SgInstaBabes is relaunched, he will not be “personally in charge or involved”.

You can read the full version of his statement to Marketing Interactive here. We summarise the key points he’s made below.

Brand refresh is in order

The founder hopes that his “stepping down from the lead role” will help refresh SgInstaBabes’ image, but he did not confirm a definite brand relaunch in the foreseeable future.

If the brand’s social media accounts are reactivated, SgInstaBabes hopes to undergo these changes:

Currently, Mr Lai confirms that girls above 16 participate in photoshoots, while only those 18 and above may join parties.

At the time of writing, SgInstaBabes’ Patreon page has 90 donors and counting.

Mr Lai said the team is in discussions as to whether the campaign will be continued.

If so, they hope to prove it’s “fun and safe” for their members and subscribers.

SgInstaBabes also does not have any “current clients or advertisers”, and has not received complaints about photographers harassing or interacting inappropriately with their models.

“Nothing sleazy about it”

The founder added that the Patreon benefits of allowing followers to join their shoots – held in groups – stemmed from requests via Insta-story polls.

As for selling exclusive photos from the album, Mr Lai claims he was following foreign Patreon pages and there was “nothing sleazy about it”.

He also clarified that the two upper tiers involving parties and a yacht experience were created as some of the girls were fond of partying and keen on the idea.

All in all, we wanted to give our followers a chance to be more involved and also make SgInstaBabes more sustainable.

Not influencers or ‘Get Juiced’ crew

SgInstaBabes is not an “influencer collective” and did not wish to be recognised as so, Mr Lai clarified.

And they also had no part in the ‘Get Juiced’ NDP video, however, he maintains that they are “good friends of ours”.

Mr Lai conceded that many of the photos posted on SgInstaBabes “tend to be sexy” and have made the public feel that their services would sexualise and objectify the girls.

He also confirmed that there was currently one 15-year-old member of the team. But, he would no longer accept anyone younger than 16.

Misunderstood on a national level

Addressing his personal lifestyle choices – which involve allegations of ‘flirting’ with a 15-year-old in 2016 – Mr Lai quipped,

I too would like to apologise for my behaviour in the past…some matters going as far back as seven years ago. Some of the [stories] have been exaggerated, but I know parts of them are true.

The founder assures everyone that he has conducted himself professionally since, and that “people do change”.

Lastly, he asked for the public’s understanding,

We hope the public will understand that our intentions have been misunderstood on a national level. And hope that they will give us peace.

No sea-duction onboard this yacht

Since Mr Lai has apologised for his behaviour in the past, and is stepping down from his position, perhaps it’s time to give SgInstaBabes the space to regroup?

As for the 90 Patreon donors, we hope one of you is lucky enough to earn that professional yacht party — if it still exists by then.

Featured image from SgInstaBabes on Patreon and Marketing Interactive.