If you enjoy scrolling through sexy photos of influencers on Instagram, SgInstaBabes has a tantalising offer for you.

Or so their newly minted Patreon page states.

For obvious reasons, this didn’t go over so well with concerned netizens, who were worried that the page was a front for seedier services.

Their founder, Mr Lai Wee Kiat is now facing his own slew of controversies, and allegations of inappropriate behaviour with minors.

He has addressed the allegations here, and plans to step down from managing the brand, once its hiatus is over.

$5,000 for a yacht party with InstaBabes

Donors are divided into tiers, based on how much cash is contributed — each tier has separate benefits. 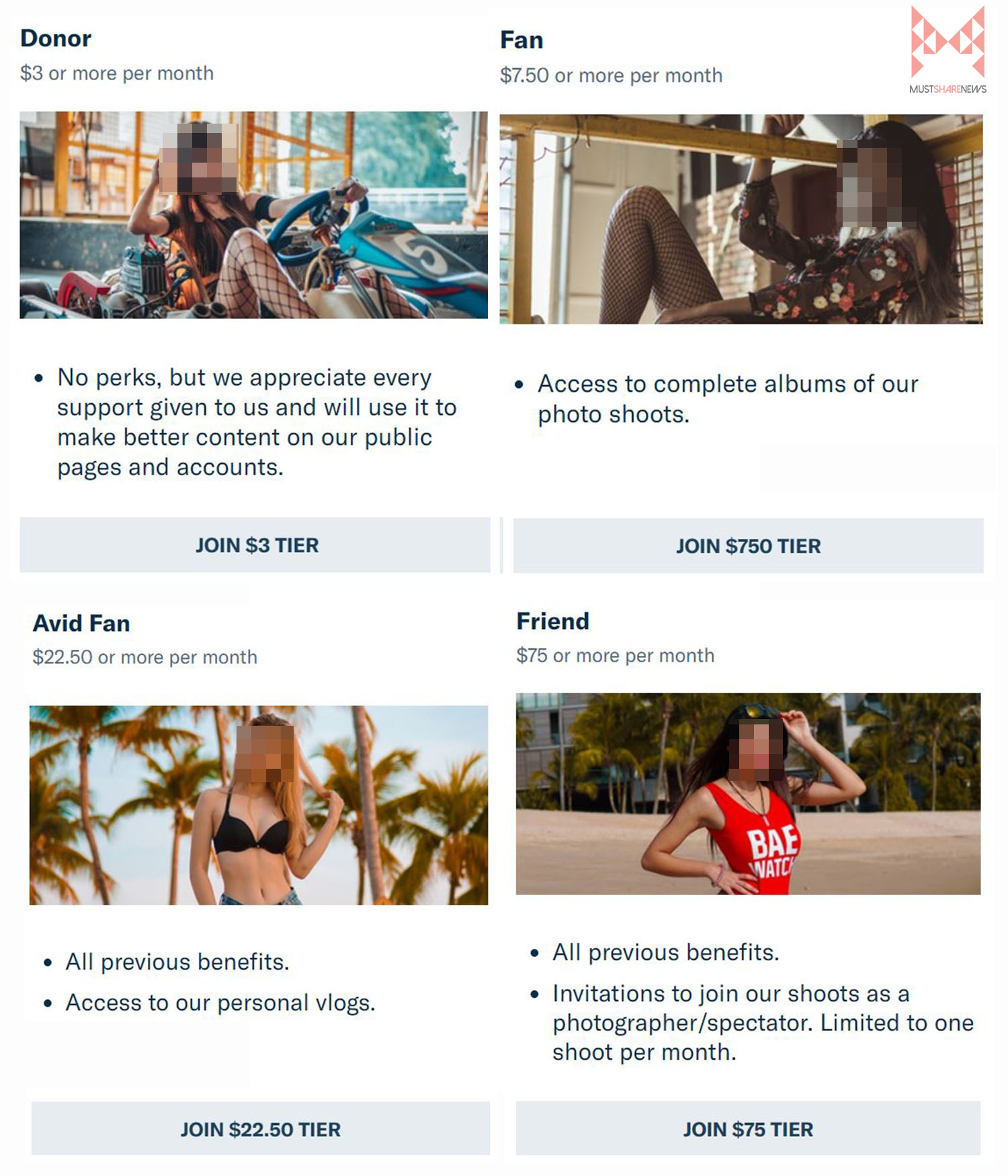 *Amounts stated are in USD.

No stranger to controversy

If you’re wondering who these ladies are, you may recognise them from a certain National Day tribute that didn’t go over so well.

Netizens also pointed out that some of the girls look a tad too young to be invited as companions to parties for donors.

Of course, the founder of SgInstaBabes has already addressed the harsh criticism on their page.

SgInstaBabes’ founder Lai Wee Kiat took to Instastories to post a lengthy Q&A for their actions. 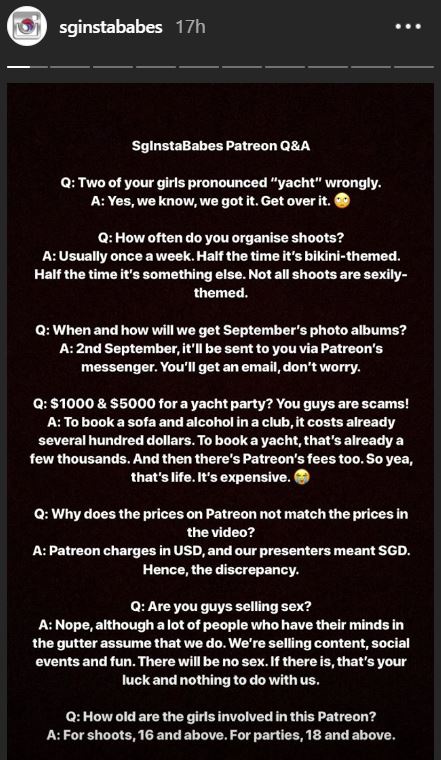 He asserts that not all of their photoshoots are “sexily-themed”, and that “there will be no sex” sold on their page.

Unlike what “a lot of people who have their minds in the gutter” have assumed, they’re only selling “content, social events and fun”.

Mr Lai added that girls for photoshoots see aged 16 and above, while party go-ers will be aged 18 and above. 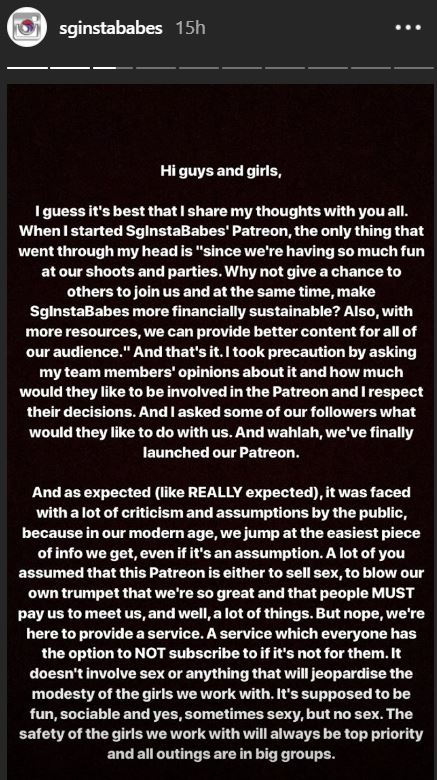 Apparently, the Patreon page was born out of their followers’ requests to be more involved in supporting the group. Mr Lai then reaffirmed his belief that most of the backlash came from people who weren’t familiar with their content and branding — “fun and sometimes cheeky”.

And that they didn’t mean to offend anyone with their page. 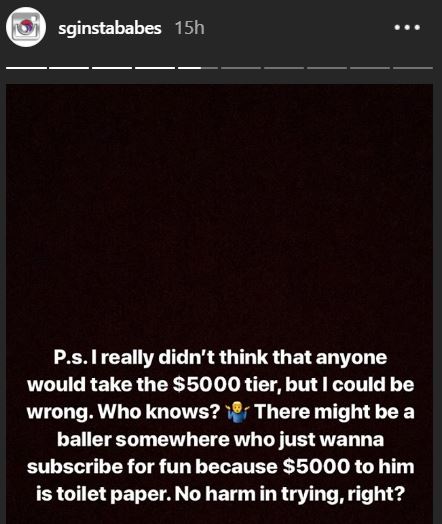 SgInstaBabes’ Patreon page already has 61 backers at the time of writing, so it does seem like they’re off to a successful start. 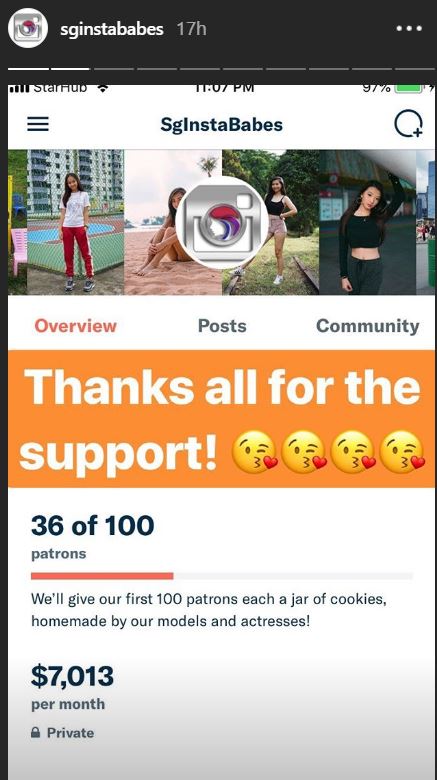 They’ve also promised to give their first 100 patrons a jar of cookies each — you’re allowed to vote for the flavour in their poll. 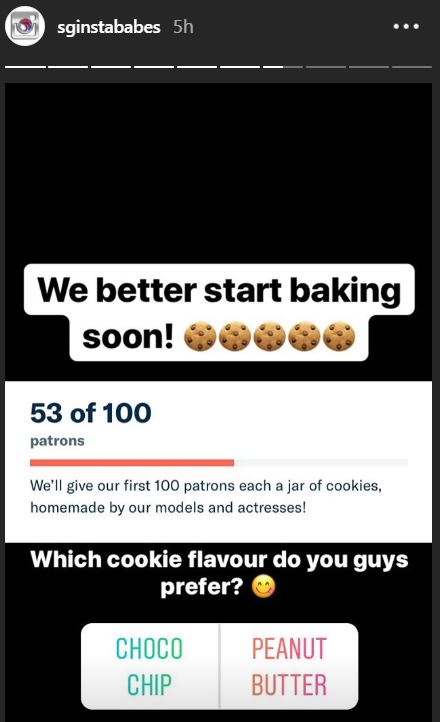 You can view the full launch video of their Patreon page here:

The influencer collective’s efforts have already caught the eye of Dee Kosh, who slid into their DMs to request for an interview. 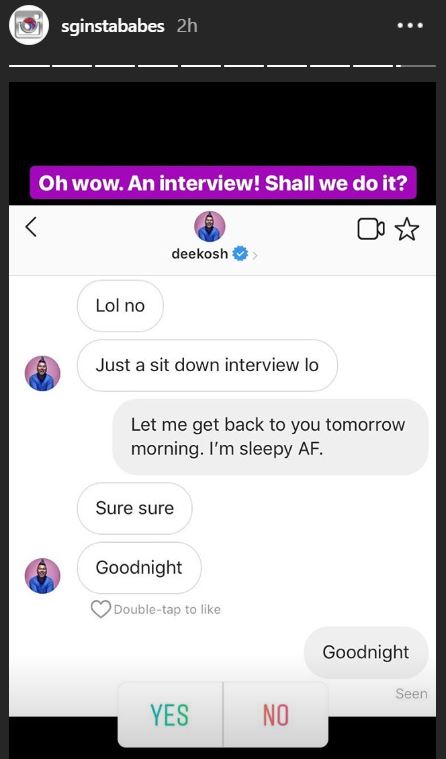 We’ll definitely be swiping right on that exclusive content.

Only one question remains.

Is this a lawful practice to manage donations for content created by influencers?

Or as netizens are wondering, a slippery slope argument to legitimise paying for escort services?

There’s probably only one way to find out.

Featured image from SgInstaBabes on Patreon.