She was previously fined for not wearing a mask on 29 Apr.

Another day, another story of someone willfully flouting ‘Circuit Breaker’ rules.

On Friday (8 May), MS News reported on the video of a heated exchange at Sun Plaza between a woman who wasn’t wearing a mask and an enforcement officer.

Or rather, the woman behaved belligerently towards the enforcement officer, and even held a mask given to her over her face, rather than wearing it.

Lady At Sun Plaza Refuses To Wear Mask Properly, Holds It Over Face Instead

Well, it seems after the video ended, further drama ensued. The police came and that lady, identified by them as a 40-year-old Singaporean, has since been arrested for assaulting a police officer. 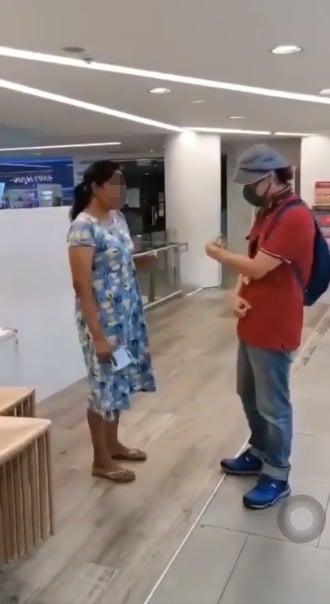 Police were called, another fracas ensued

In the video, initially posted on All Singapore Stuff’s Facebook page, a security officer at the mall in Sembawang can be seen calling the police to handle the woman.

The video ends when she questions the person recording the video in Mandarin, asking him if he’s done taking photos.

Well, it seems she wasn’t done herself.

In a Facebook post made late on Friday (8 May) night, the Singapore Police Force (SPF) described what happened after their officers arrived. 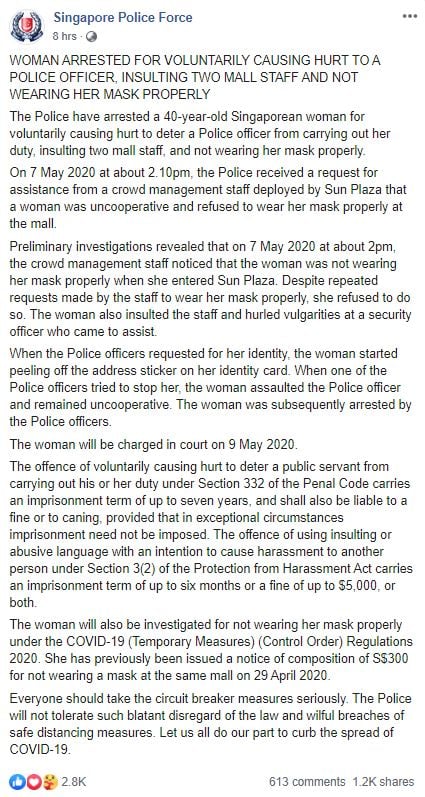 Woman hurled vulgarities at security officer, was uncooperative with police

The incident took place on Thursday (7 May) at 2pm, the police said, when a crowd management staff reminded her to wear her mask properly and what we saw in the video happened.

Apparently, the woman also hurled vulgarities at the security officer. He called the police at about 2.10pm.

She wasn’t when the police arrived, she was still uncooperative, they said — she even tried to remove the address sticker on her identity card.

And when a police officer tried to stop her from doing that, she assaulted that officer, according to the SPF’s Facebook post. 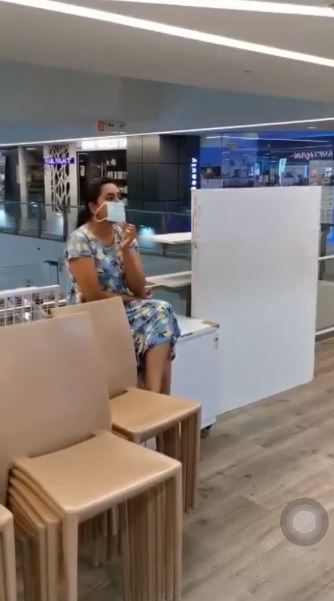 Woman will be charged in court on 9 May

The belligerent woman was then arrested, the post said.

She will be charged in court on Saturday (9 May).

From the post, it seems that woman will be facing at least two charges:

The penalty for (1) is a jail term of up to seven years, or a combination of prison, fine, and/or caning.

Woman was previously fined for not wearing mask on 29 Apr

That’s not all. The Singaporean’s failure to wear her mask properly will also be probed under the Covid-19 (Temporary Measures) (Control Order) Regulations 2020.

The police also revealed that she already had a previous offence under that law — on 29 Apr, she was fined $300 for not wearing a mask, also at Sun Plaza. 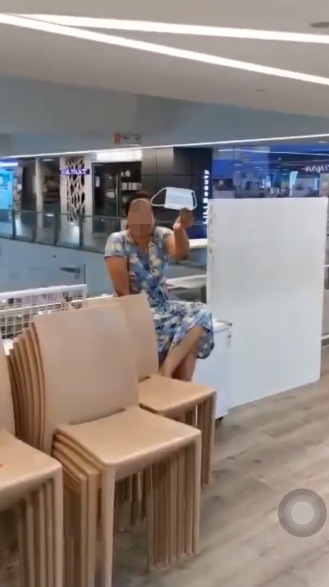 Please follow the rules, but don’t be too quick to draw conclusions

The police have warned that they “will not tolerate” cases where people willfully flout the law on safe distancing, so let this be a reminder to follow the rules to mitigate the spread of Covid-19.

Although it may be tempting to associate the Sun Plaza woman with the “Sovereign Lady” due to the similar circumstances in both cases, let’s not be too quick to form conclusions before we know more about both cases.

However, while the Sun Plaza lady might have her reasons for not wanting to wear a mask, her behaviour towards the mall staff and the police was indeed uncalled for, and she will face punishment under the law for her actions.

That doesn’t mean, however, that when we discuss this case with friends or online, we should make sweeping statements, or worse, point fingers at the wrong people.

While Sun Plaza lady wasn’t respectful, we shouldn’t stoop to the same level.