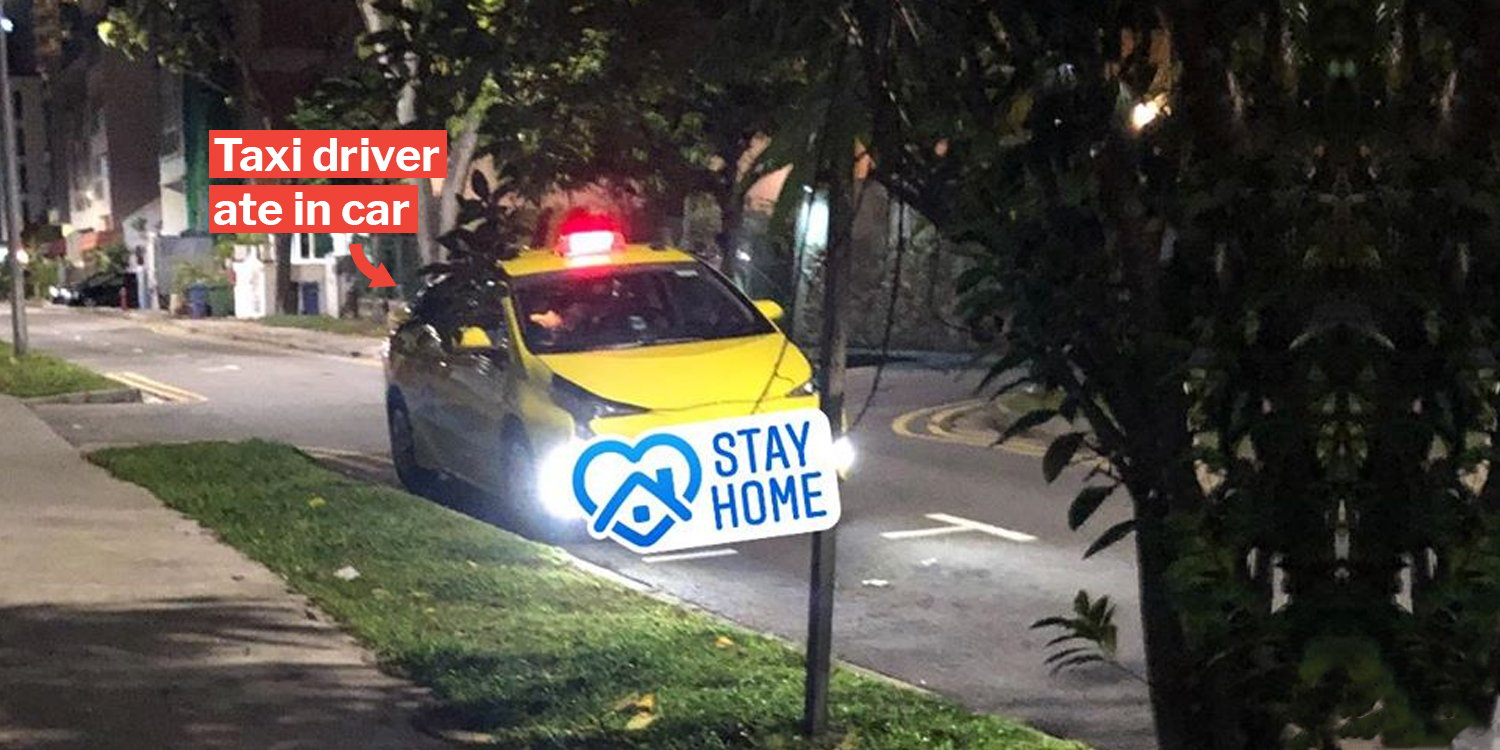 A heartbreaking scene that highlights the effects of the outbreak.

As the stringent ‘Circuit Breaker’ measures kick in on Tuesday (7 Apr), many Singaporeans are now working from the comforts of their own homes.

Taxi and private-hire drivers, however, aren’t as lucky, as they continue to roam the streets in search of passengers.

However, business is really bad for them. One Grab driver apparently broke down when his passenger asked about his well-being, claiming he only had 2 passengers throughout the morning.

On Thursday (9 Apr), another Facebook user by the name of Lisa Neo took to Facebook to highlight the plight of taxi drivers during these difficult times. 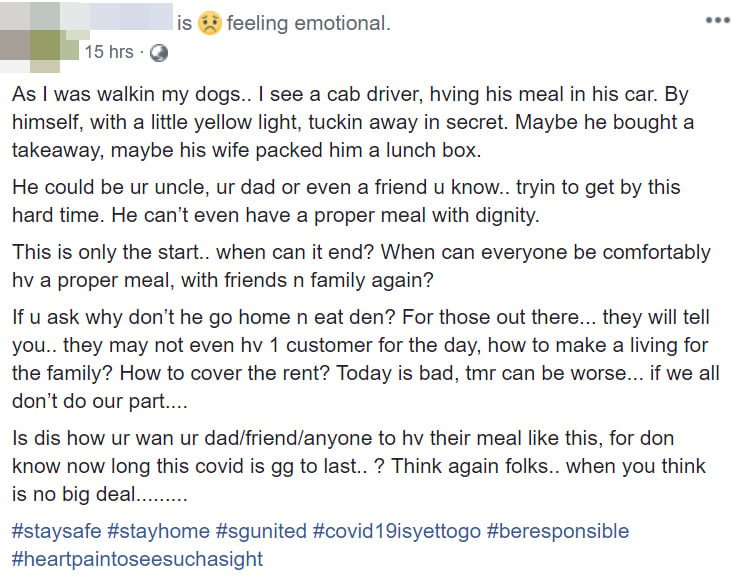 ComfortDelGro taxi driver eats in car with light on

Ms Neo wrote in her post that she was walking her dogs when she encountered a yellow ComfortDelGro taxi parked along the roadside. 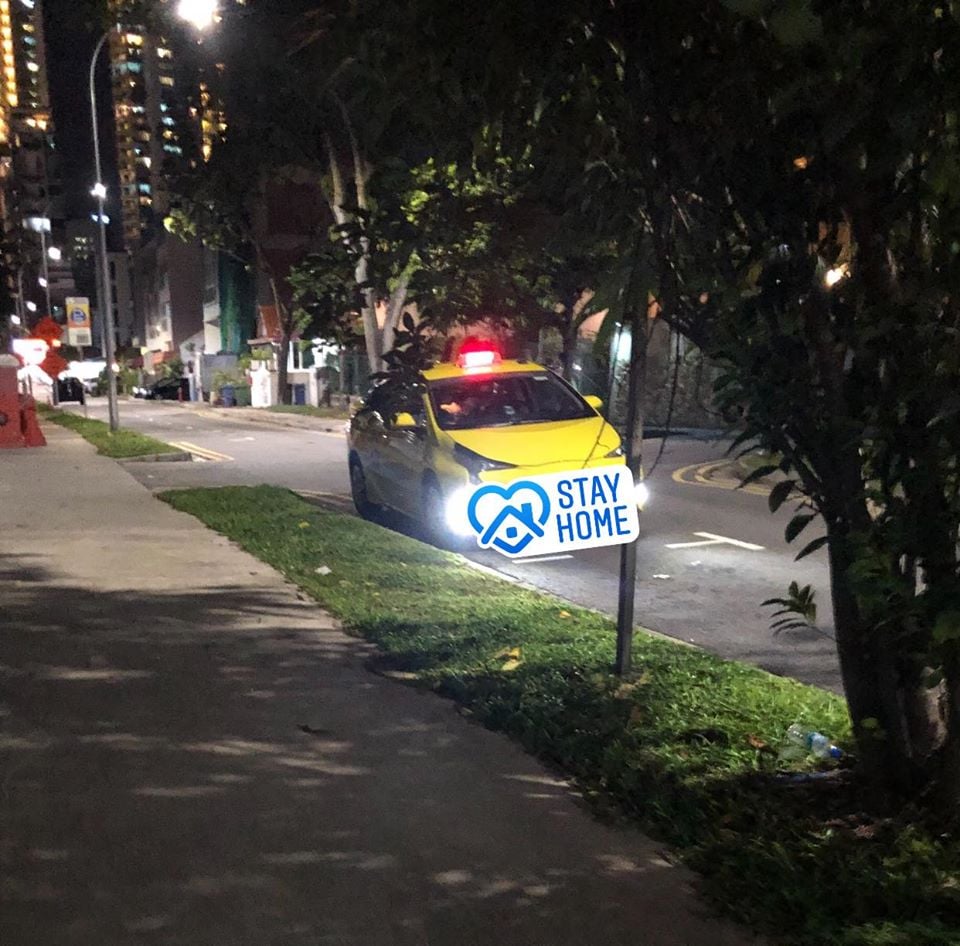 The tiny in-car lights were on and probably stood out against the dark surroundings.

On closer inspection, Ms Neo saw a taxi driver having his meal all alone inside the vehicle.

According to Ms Neo, taxi drivers’ are having it tough during this ‘Circuit Breaker’, with some even struggling to have a single customer per day.

This was likely due to the fact that most Singaporeans are now telecommuting from home, for both work and studies.

Ms Neo’s heart ached upon seeing the sight and wondered when the Covid-19 outbreak will end so everyone can have meals together with family and friends again.

For those who still think the Covid-19 outbreak is but a minor obstacle, Ms Neo urged them to “think again”.

These are people’s rice bowls on the line and god knows how long the outbreak will last if we take it lightly.

Ms Neo’s post has since gone viral with over 2,200 shares at the time of writing, and has seen a slew of comments too.

Many netizens expressed sympathy for taxi drivers affected by the Covid-19 outbreak.

Another Facebook users urged Singaporeans to also spare a thought for lorry drivers who apparently have to eat in their vehicles too.

One netizen interestingly pointed out that eating in vehicles might actually constitute an offence.

MS News has reached out to the Ministry of Manpower to enquire if they are legally allowed to do so.

Seeing cab drivers eating alone in their cars is no doubt a heartbreaking sight.

If it’s indeed an offence to eat in their vehicles, we hope the relevant companies will work out a temporary solution so drivers can enjoy their meals comfortably.

As for the rest of us, the best we can do now to help is to stay home as much as possible and to minimise any social interactions.

We hope Singaporeans will be cooperative during the month-long Circuit Breaker so the measures will not be extended.