Drivers have been hit hard by the health crisis.

Grab Driver Breaks Down Due To Covid-19 Stress, Passenger Listens To His Woes

Grab and taxi drivers have been hit hard by Covid-19. But a man witnessed the true effects on them when he hailed a Grab car and asked an innocent question.

A Mr Kuah was heading home after having lunch in the CBD area, so he called for a Grab driver.

Turns out, he was only the second passenger that day. 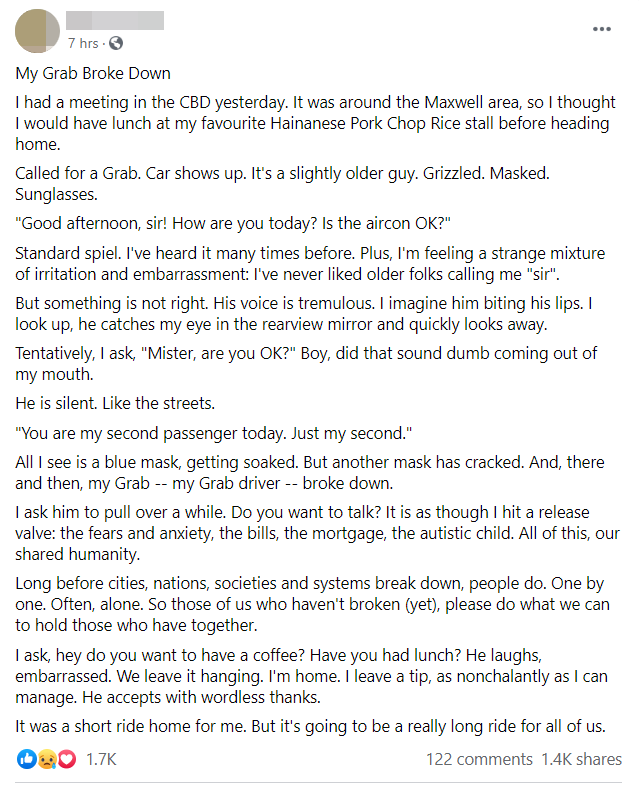 Grab driver had one 1 passenger before meeting man

There is little to no demand for taxis and Grab as tourists aren’t allowed in and people practice safe distancing.

This video shows how dire the conditions are for these drivers at the moment.

However, they still have to work to put food on the table.

When Mr Kuah got into the car, he was greeted with the usual pleasantries, such as whether the air conditioning was too cold.

He’d heard them numerous times before, so wasn’t particularly concerned. But the driver’s voice appeared to be unsteady. When Mr Kuah looked up, he refused to meet his eye.

Sensing something was wrong, Mr Kuah decided to ask him a fateful question,

Mister, are you OK?

It was a simple question of concern, but sometimes these are the ones that bring out the most vulnerability in people.

The driver spent some time silent. As silent as the streets that were breezing them by on their ride, Mr Kuah quipped.

You are my second passenger today. Just my second.

And everything broke down.

Driver breaks down over Covid-19 worries

Beneath that blue mask which drivers now wear out of personal and passenger safety, it was like “another mask (had) cracked”.

The driver started sobbing uncontrollably, as one is wont to do when overwhelmed with emotion. Clearly, he wasn’t in a state to drive, so Mr Kuah asked him to pull over for a while.

“Do you want to talk?”, he asked. And the driver poured out his emotions. He had bills and a mortgage to pay, a family to feed, an autistic child to take care of.

All this on top of Covid-19 severely impacting his business had grown to be too much.

Help those who are suffering if you can

And it is in this time that while we suffer as a collective, there are those of us who are still able to help those who have broken down.

…those of us who haven’t broken (yet), please do what we can to hold those who have (had a breakdown) together

He then offered to get a coffee or lunch with the driver, in a show of camaraderie to a random stranger. However, this led the driver to laugh, embarrassed.

We can imagine not wanting to spend too much time with a stranger who’d just witnessed you break down inside a car.

Regardless, Mr Kuah leaves him a tip. A tip which the driver accepts, “with wordless thanks”.

We’re all in this together

A small gesture to support someone in need in these trying times is hard to come by. But simply reaching out with a word can do wonders for those who are struggling, often alone, unable to share their woes for fear of being weak.

They need not suffer in silence alone — all of us can help out. So do reach out if we can, and be a little more empathetic to others as we combat this epidemic together.