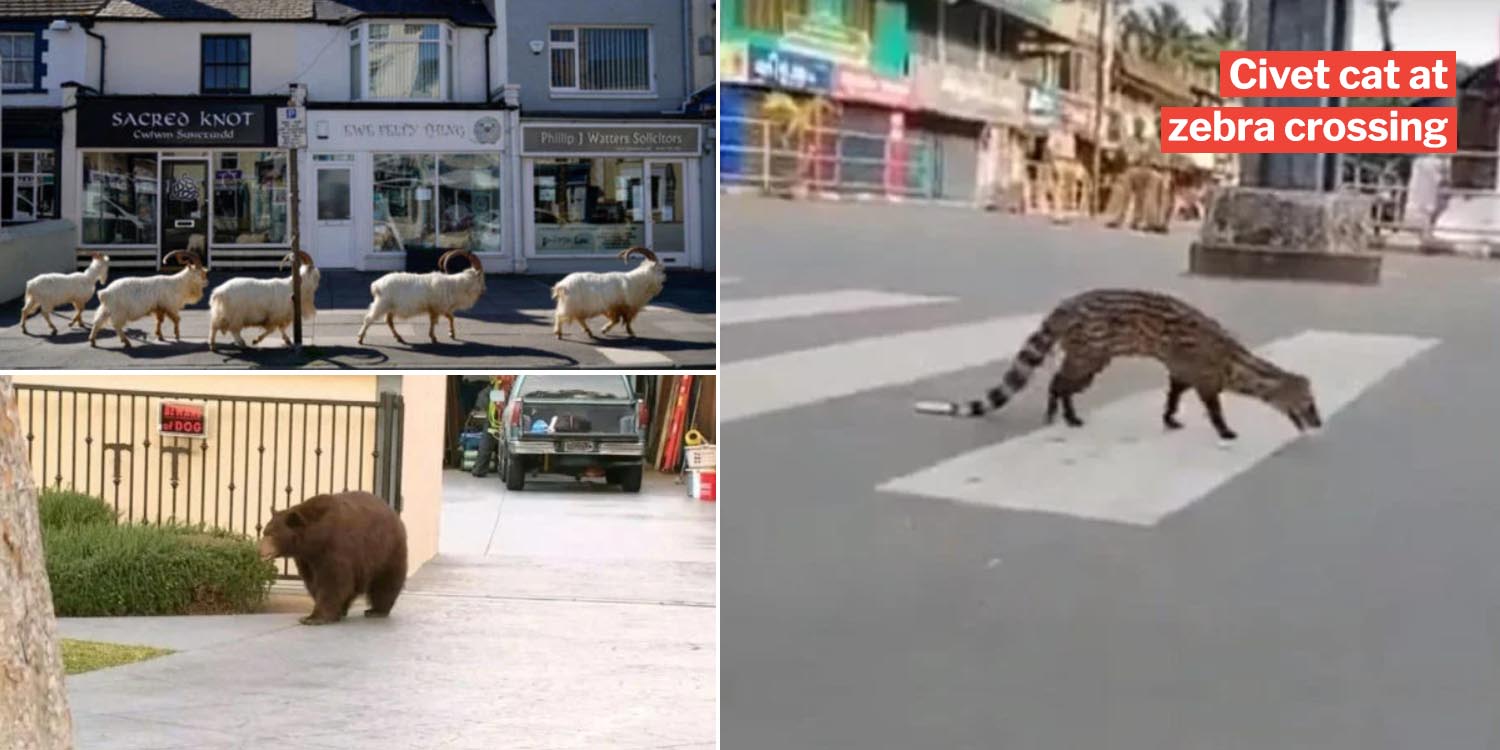 Animal Crossings Spotted In Real Life Thanks To Covid-19

Animal Crossing has taken the world by storm. With countless people stuck at home, many of us have turned to video games to escape reality. 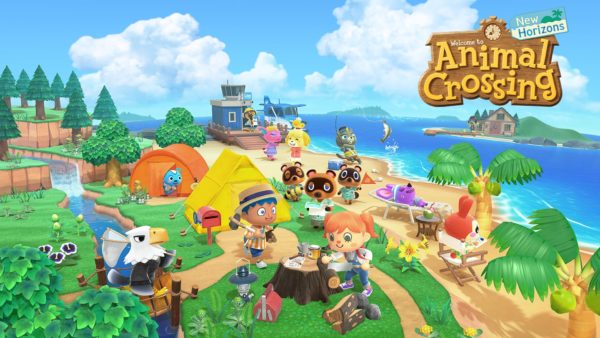 However, bizarre animal crossings aren’t just happening on our Nintendo Switches, but also in the deserted streets of our cities as well.

Let’s take a look at some of the most hilarious ‘animal crossings’ captured by social media around the world. Catching virtual fish for your owl friend to open a museum can wait 10 minutes, can’t it?

The cobblestone streets of the seaside town of Llandudno, Wales were emptied out as citizens stayed home amid the Covid-19 outbreak.

It didn’t take long though for residents to hear the clickety-clack – not of feet, but of hooves – as a herd of over 100 Kashmiri goats gathered in the town centre.

Residents first spotted the herds on 27 Mar (Friday) and continued seeing them strolling around town all through the weekend. 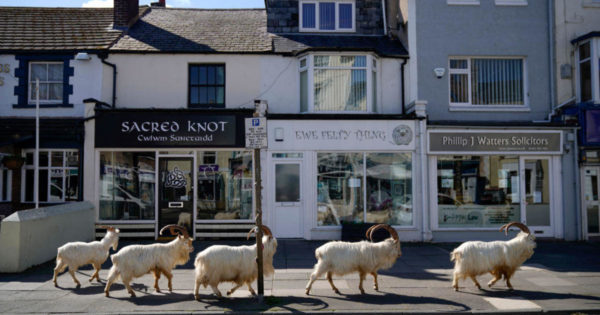 Spotted nibbling on perfectly manicured hedges and trampling over lawns, residents have lovingly renamed them as their overlords.

So much for a prohibition of mass gatherings!

Stay-home notices should be taken seriously — even the animal kingdom knows it.

In a now viral Twitter video posted on 6 Apr, people spotted a rhino exploring the empty streets in Nepal, during their extended lockdown. 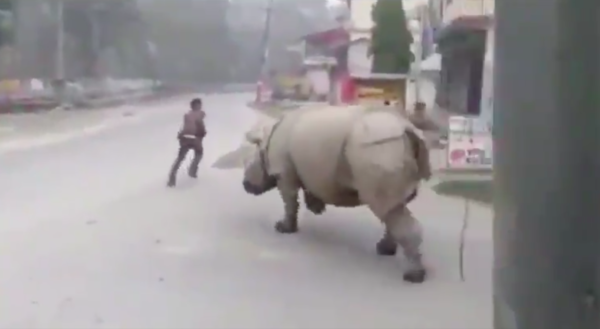 While most people stayed home & complied with regulations, there were still several citizens roaming the streets. Unfortunately, this rhino was not having it.

The video depicts ‘Inspector Rhino’ giving chase to a man before smugly lumbering away. If anything, he must have given the man quite a scare.

Well, if a rhino can see the importance of staying home and you can’t, you know there’s a problem.

The boulevards of Paris welcome countless tourists yearly, and are best known for their swanky high fashion districts.

But despite strict Covid-19 stay home measures, this particular high SES wild boar family decided to do a little window shopping of their own. The Yeshiva World reported these sightings in mid-April. 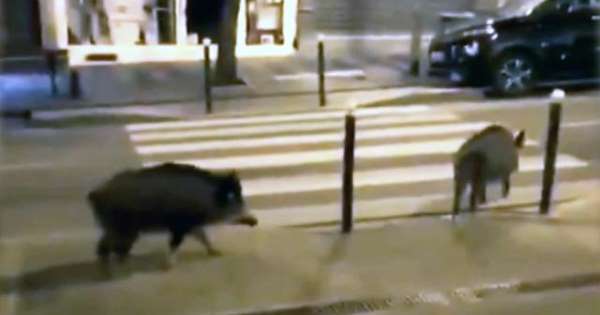 For context, wild boars are very much considered pests by farmers in the rural areas of France for ruining their crops.

Perhaps they’ve just had enough of that discrimination and decided to move into the city for some gentrification. How’s that for throwing pearls to pigs?

Residents in a residential area in Monrovia, California were startled on 22 Feb when their dogs began barking crazily, given how everyone was staying home.

Little did they know that the disturbance came from a lumbering wild black bear, right in their backyards. 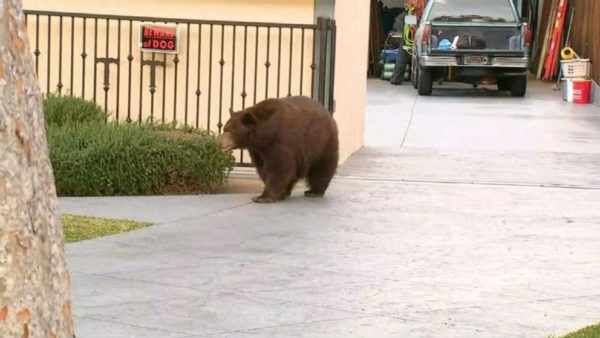 The 180kg elderly female bear roamed leisurely through the neighborhood near Angeles National Forest before being safely removed by park officials, according to BBC.

The slightly warmer weather is thought to be the reason the bear left her den, in search of food. Seeing how far into the town she went, her hunger must have been un-bearable.

In a Planet of the Apes-type situation, hoards of monkeys came raring onto the streets of Lopburi, Thailand, reports Canoe on 12 Mar.

The situation emerged as tourists who visited the area often ignored “Don’t feed the monkeys” signs. As the pandemic took a toll on tourism, less visitors also meant larger swarms of screaming, voracious monkeys looking for someone to feed them.

We’re not condoning their behavior, but we definitely feel it’s relatable. We get the same way when we’re hangry.

Employees and customers visiting this branch of Bank Islam in Petaling Jaya got quite a shock at the crowd already present. Malaymail reported that an entire herd of cows appeared to be “queuing” right outside on 17 Apr.

Disappointingly, none of them appeared to be adhering to the 1-metre social distancing rule. 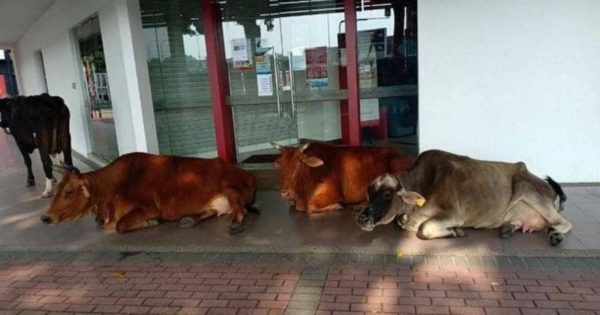 No, the words above aren’t gibberish. Just sing them to the tune of the Circle of Life intro from the Lion King and you’ll get the Zulu version of “Here comes a lion”.

In this case, here comes a whole pack of them — completely spread out all over the now empty tar road. BBC reported this mass napping session that has been occurring frequently since Kruger National Park was shut on 25 Mar. 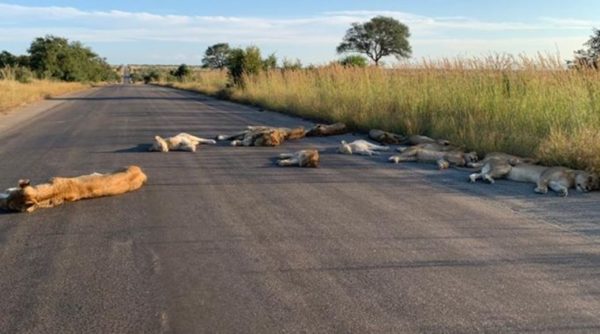 We guess in world without vehicles, every road can be their oyster — for nap time.

Leatherback sea turtles have been classified as a “vulnerable” animal group for their conservation status.

However, thanks to the now tourist-free beaches, these beautiful creatures have been able to make a comeback in large numbers of nests.

11 turtle nests have been found as of late, a record high in 20 years. 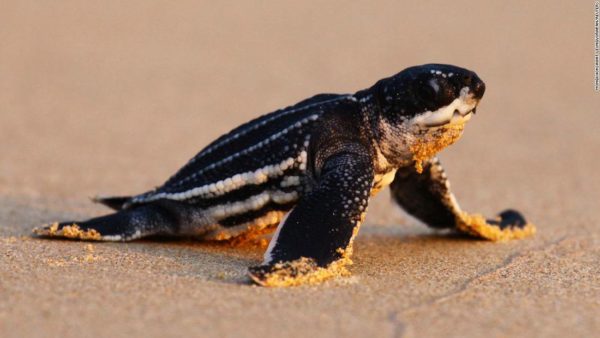 For the turtles who already have a high mortality rate in the wild due to other human disturbances out at sea, this is incredibly good news.

You may know this creature most famously from coffee — made from its poop. Though typically nocturnal animals, this civet cat was seen in the middle of the day, strolling across a zebra crossing.

In the town of Kozhikode in North Kerala, India, people spotted this civet just 2 days after Prime Minister Narendra Modi declared a nationwide lockdown on 24 Mar. 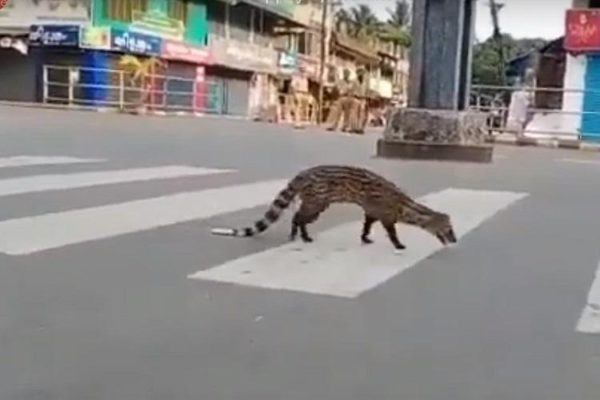 An officer from the Indian Forest Service (IFS) confirmed the authenticity of this video on Twitter as well. According to Mr Parveen Kaswan, the civet was likely an escaped captive and actually looked quite sick. Native to the area, the reduction in traffic may give more civets the freedom to come out and about.

Against the backdrop of silent streets between vacant office buildings, a kangaroo bounding toward the sunset is a picturesque image. And one that the lucky South Australian police captured in Adelaide, Australia on 19 Apr. 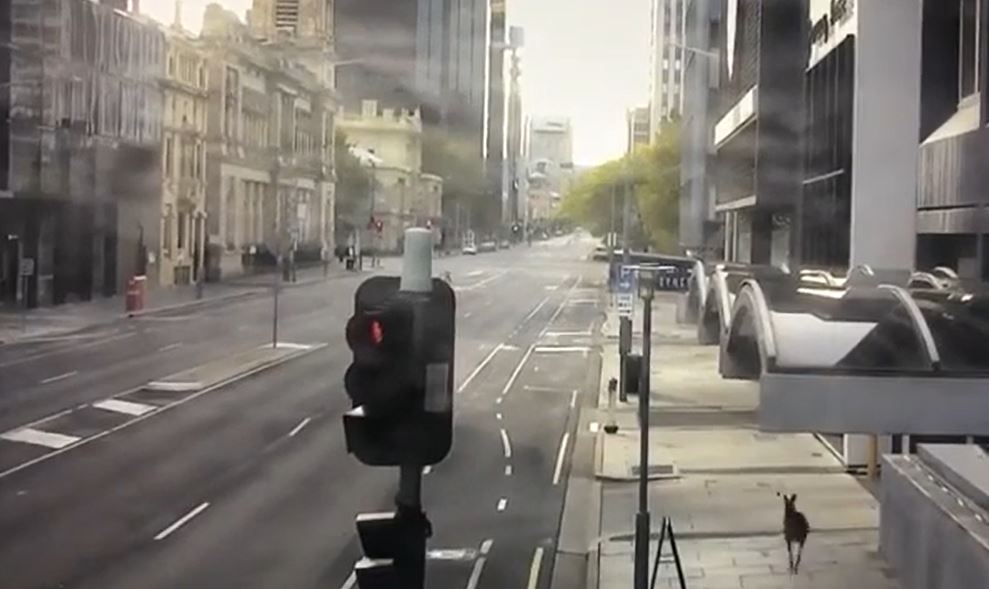 The kangaroo seemed to be having the time of its life, bouncing gleefully from street to street, across roads bereft of humans.

The canals in Venice, Italy are essentially the roads of that city, so this should count as a bonus.

This rhizostoma pulmo – aka a ‘barrel jelly’ – was seen casually drifting through the now pristine waters of the Venice canals as reported by CNN on 23 Apr.

The sight of it slowly makin’ it’s way downtown is almost therapeutic.

Allowing nature to return to its roots

It goes without saying that our way of life affects the wildlife around us, especially in cities around the world.

Now with humans stuck within the confines of their homes, it isn’t that surprising that animals are just coming back to what was once theirs.

Perhaps that’s one of the silver-linings in the Covid-19 cloud that has shrouded our freedoms, returning nature some space to breathe.