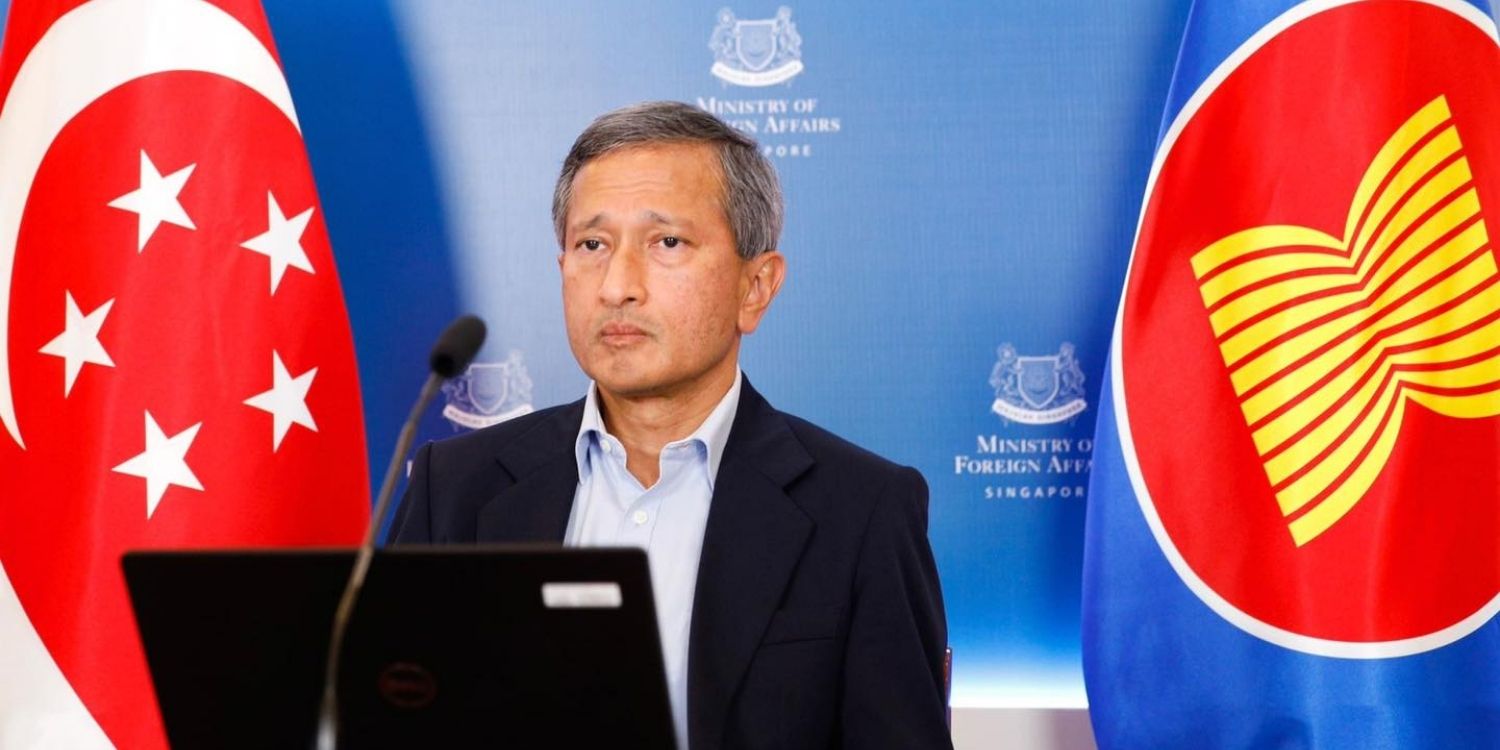 Though it has been months since the junta seized control of Myanmar, the situation in the country remains uncertain and tense.

Earlier in April, ASEAN leaders came to an agreement on a five-point consensus with junta chief Min Aung Hlaing.

However, as concerns brew over the military government’s slow implementation of the roadmap, ASEAN leaders have seemingly taken a stance on the matter.

On Saturday (16 Oct), Brunei, the current chair of ASEAN, said the bloc will be inviting a non-political representative instead of Min for the summit later this month. 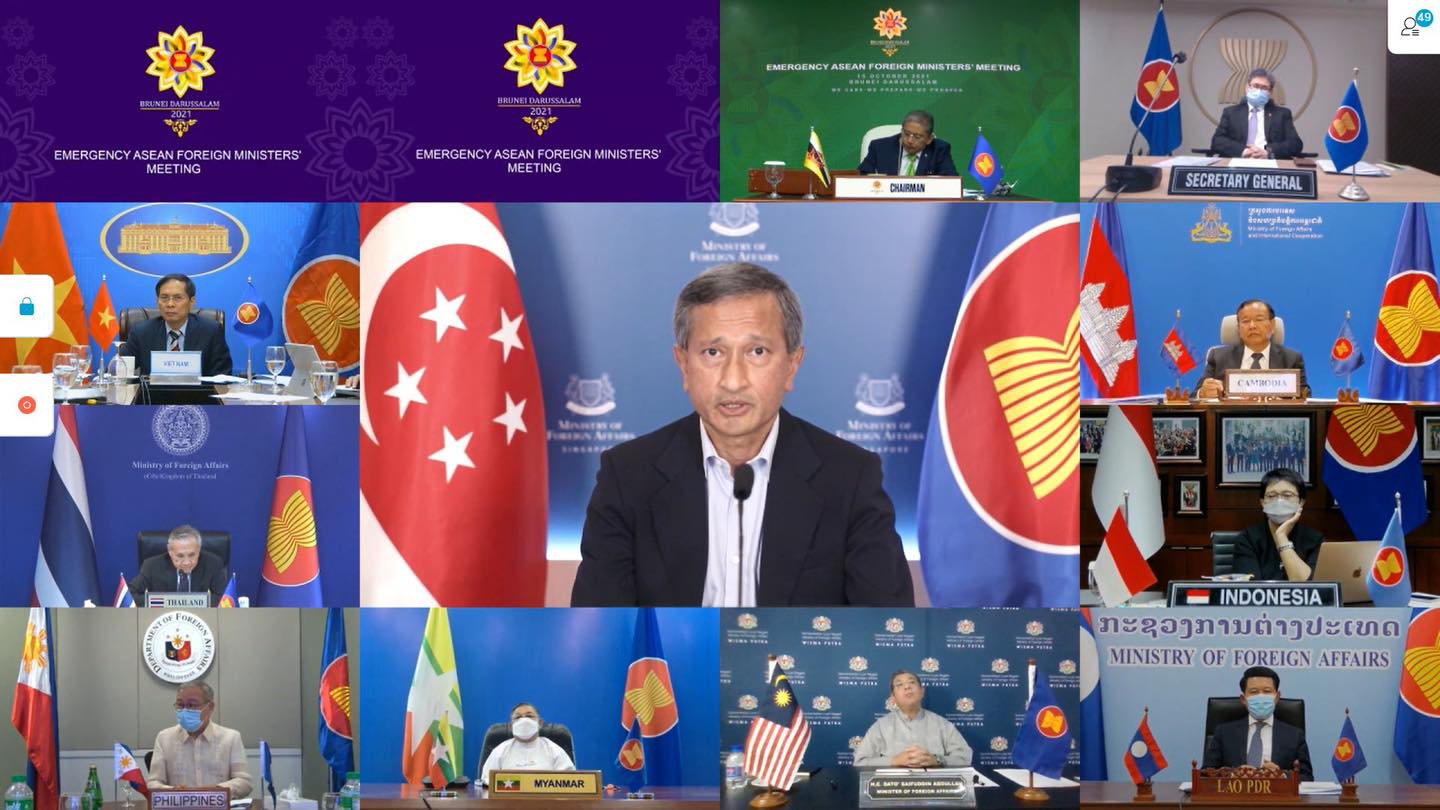 Many deem the move unprecedented considering the union’s history of favouring an engaging and non-interfering approach.

Myanmar fails to implement plan it had agreed to with ASEAN

In April, 2 months after the Myanmar junta took control, General Min Aung Hlaing agreed to a five-point consensus with ASEAN. The five points mainly include:

Though months have passed, Myanmar has failed to implement the roadmap, including stopping violence and allowing humanitarian access, reports Channel NewsAsia (CNA).

As such, pressure has been mounting for ASEAN to take a tougher stance against Myanmar.

Earlier this week, Singapore, Malaysia, and Indonesia had reportedly indicated that they’re in favour of excluding Min from the virtual ASEAN summit happening from 26-28 Oct.

Since then, other member countries have voiced similar sentiments.

The Philippines’ Foreign Minister, for instance, wrote that ASEAN can no longer take a “neutral stance” with regard to Myanmar, reports Reuters.

On Saturday (16 Oct), Singapore’s Foreign Minister Vivian Balakrishnan revealed the union’s decision to invite a non-political representative from Myanmar to the upcoming summit. 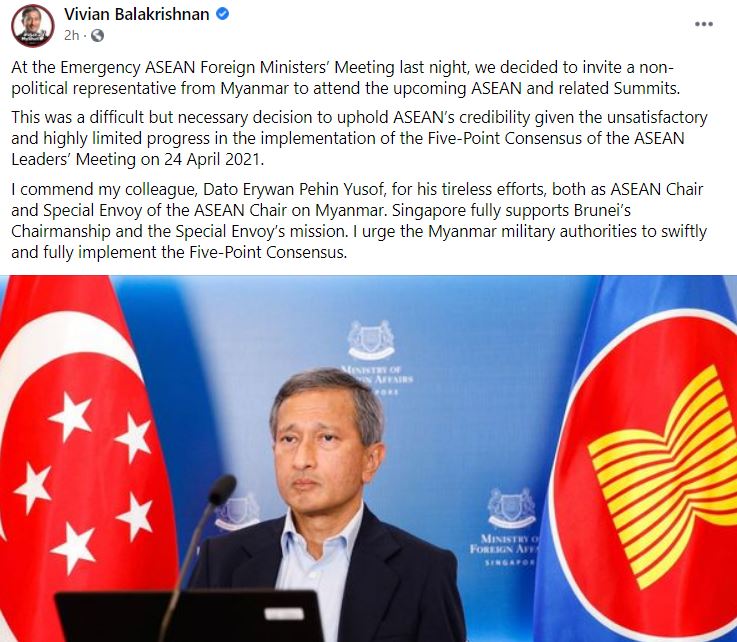 This apparently came after a failure to reach a consensus for a political representative to attend the meeting.

He, however, did not name the representative who will be attending in Min’s place.

He also took the chance to urge the junta to implement the five-point consensus swiftly.

Hope junta will implement the consensus

Knowing that the junta has yet to implement the key plan to possibly alleviate the tension in Myanmar is disappointing, especially since many months have passed.

We’re also proud of Singapore’s tough stance on the matter despite our geographically small presence.

Let’s hope the junta will take the necessary action soon, for the sake of the welfare of people in Myanmar.