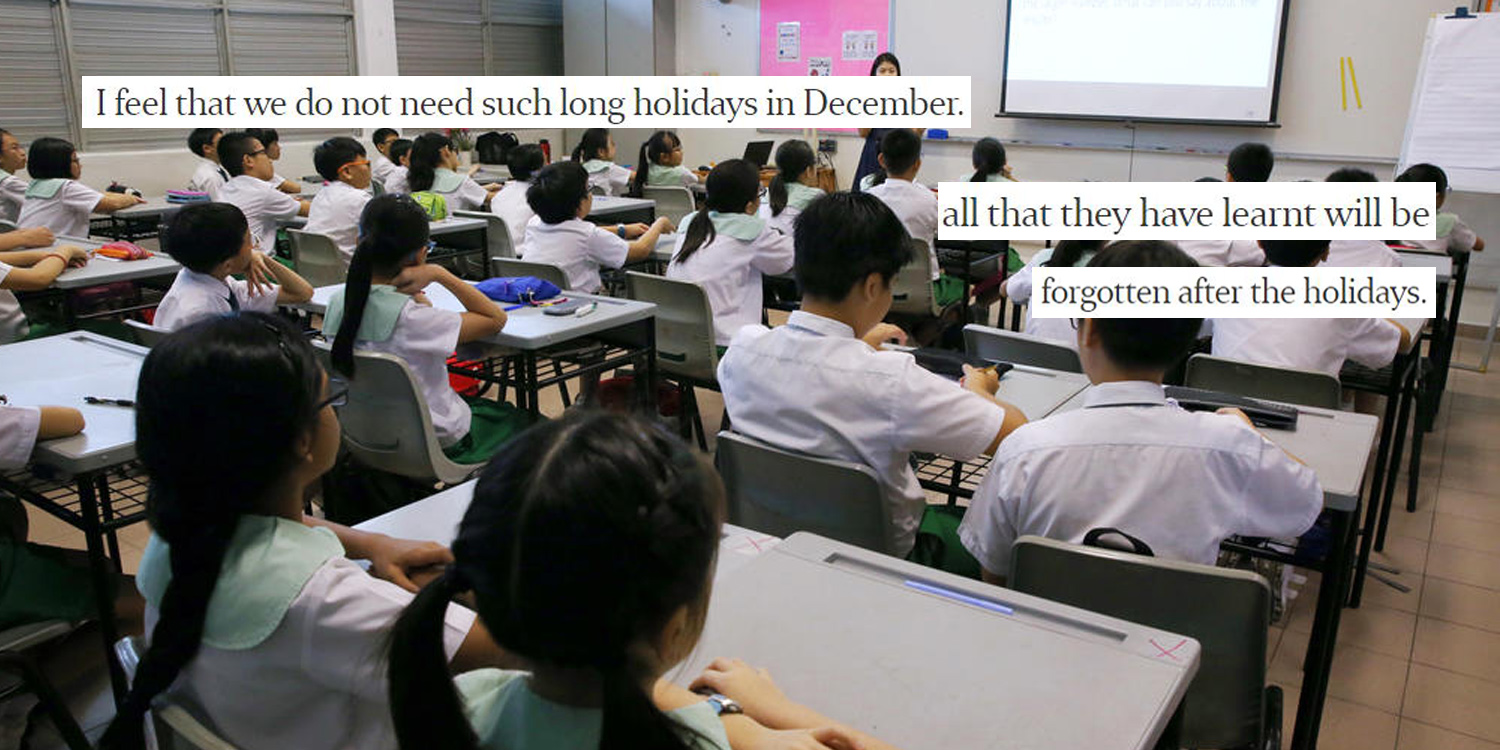 After an entire month of mugging for end-of-year exams, one thing Singaporean students look forward to is enjoying a well-deserved year-end holiday.

However, a parent, Joy, recently wrote in to The Straits Times, expressing her belief that the year-end holidays are waaay too long.

As a solution, she suggests taking 2 weeks of December holidays and transplanting them into the March and September breaks instead.

Children being restless after staying at home for too long

In her letter, Joy mentioned that because they had such a long break from school, her children started getting restless.

Parents have to plan many holiday activities to occupy their time

In fact, this is a realistic concern for some as working parents would have to take days off from work to accompany their children.

Further down the letter, Joy added that the long break isn’t productive for students struggling with their Mother Tongues.

She believes that students are losing touch with their Mother Tongues after not practising them for more than 6 weeks. She added that,

All that they have learnt will be forgotten after the holidays.

Unfortunately, not all parents are on the same page as Joy.

When the letter was published on The Straits Times’ Facebook page, parents were incredulous.

In response to the concern of children becoming restless, a fellow parent shared that her children never had a chance to get restless because of activities she planned.

The parent added that her children are busy with outdoor and home-based activities like baking and spring-cleaning.

And contrary to Joy’s complaints, this parent is glad that she is able to engage in such activities with her children while they are away from school.

In response to Joy’s Mother Tongue concern, a netizen helpfully pointed out that Joy could be more responsible in honing her children’s Mother Tongue instead of “pushing it to the teachers”.

The netizen also suggests that Joy spend some quality time with her children.

On the other hand, another netizen defended Joy by reiterating the fact that she wasn’t, in fact, asking to decrease the children’s overall holidays. After all, the purpose of her letter was to shift the holidays around for a more balanced schedule.

And contrary to other parents’ beliefs, this netizen felt that it’s good for children to be bored. Because only then will they become creative and “play on their own”.

Are year-end holidays really too long?

While everyone has different opinions on long year-end holidays, it’s tough to say who’s right and wrong.

Long year-end holidays are meant for children to recharge before hustling when the new school year starts again.

What are your views on this? Share them with us in the comments below.

Feature images adapted from Digital Learning and The Straits Times.