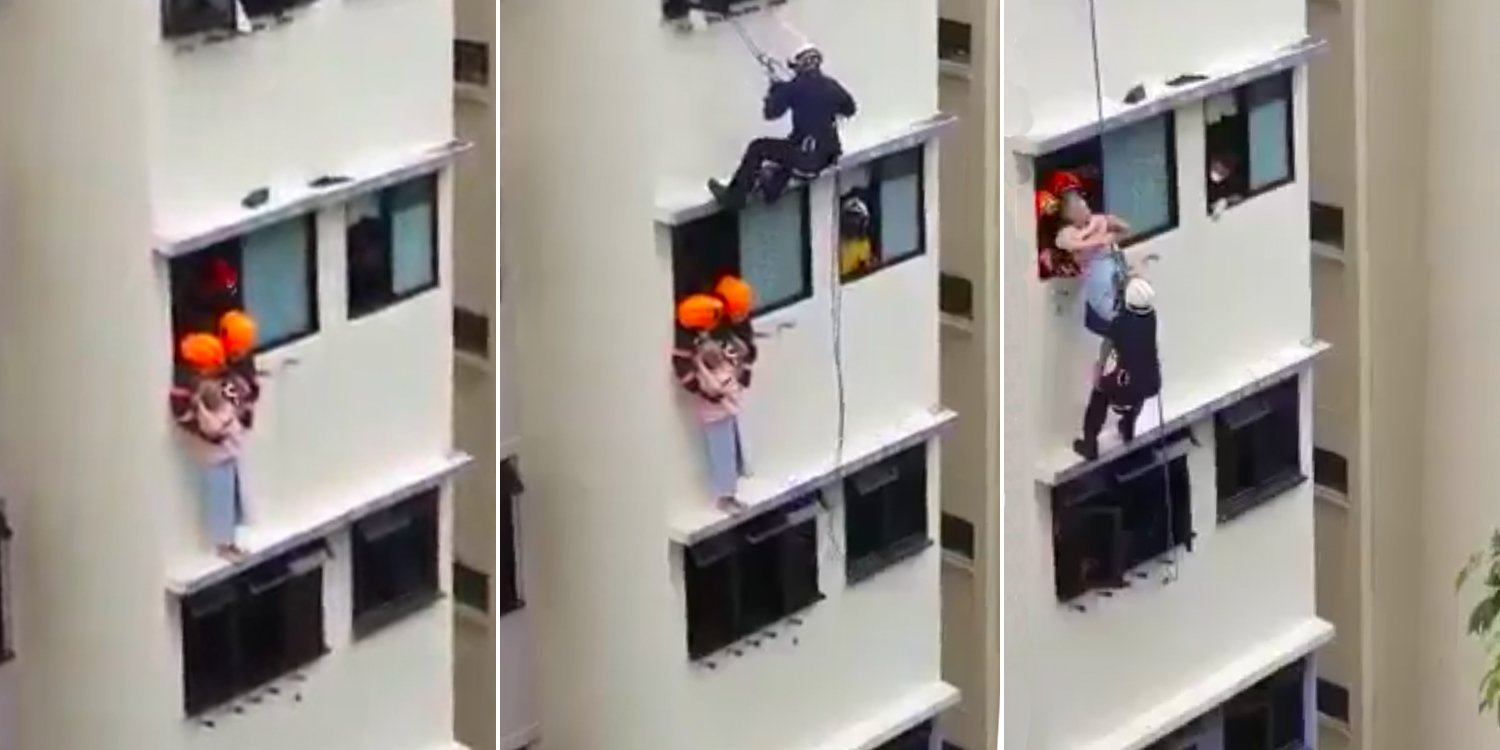 Our Singapore Civil Defence Force (SCDF) personnel are always quick to arrive on the scene in emergency cases.

On Friday (20 Aug), the same could be said for our everyday heroes when concerned residents notified them that an elderly woman was standing on the ledge outside her kitchen in Jurong.

SCDF deployed a safety life air pack before a Disaster Assistance and Rescue Team (DART) rescuer rappelled down and brought the woman to safety.

On a rainy Friday (20 Aug) morning, the elderly woman stood on the ledge outside her kitchen at Block 113 Tao Ching Road.

In a video of the incident shared on the Sg Chinese Community Facebook group, the woman appeared on the 6th floor of the block. 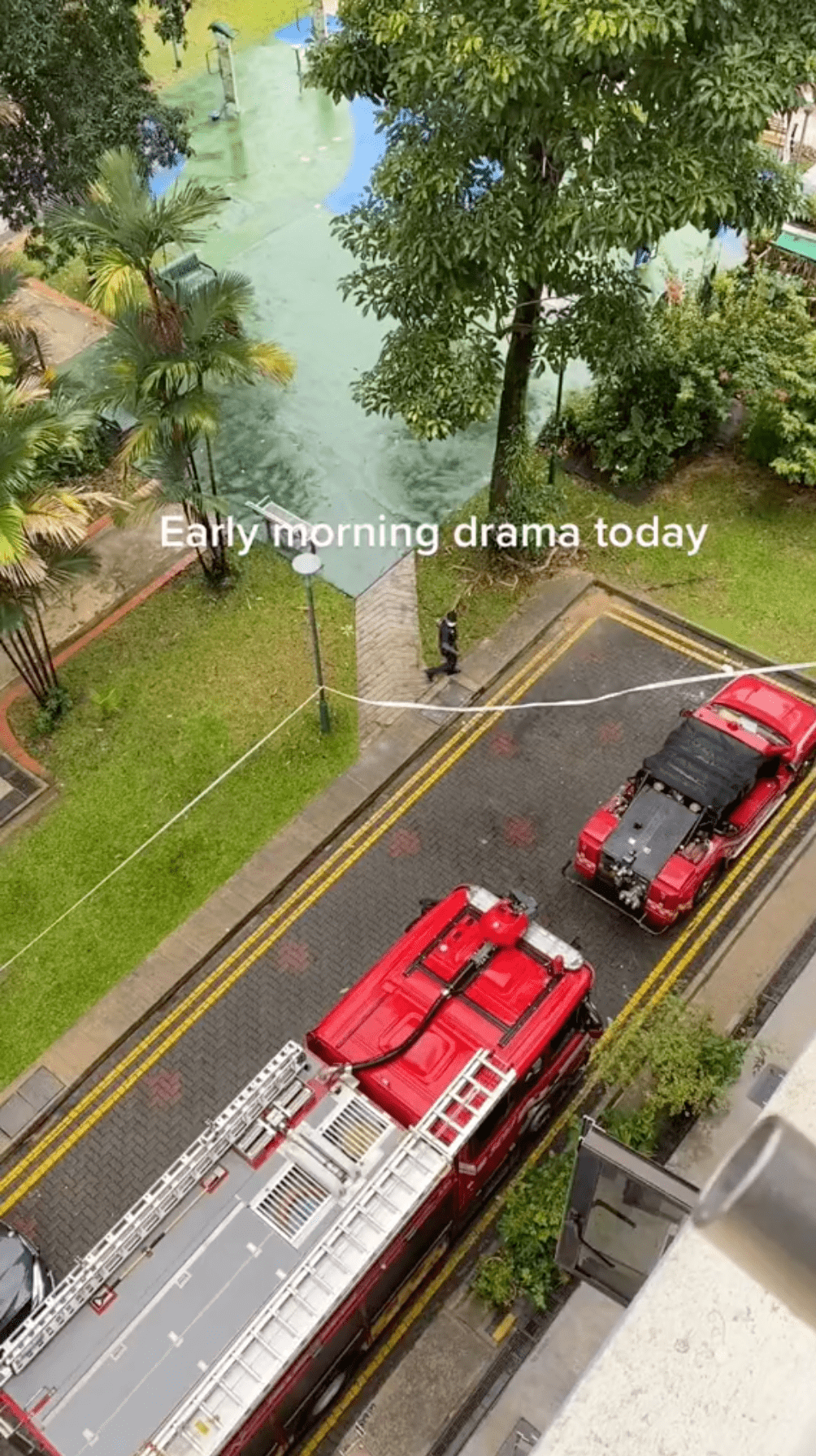 During the rescue, 2 SCDF personnel were seen holding onto the woman. 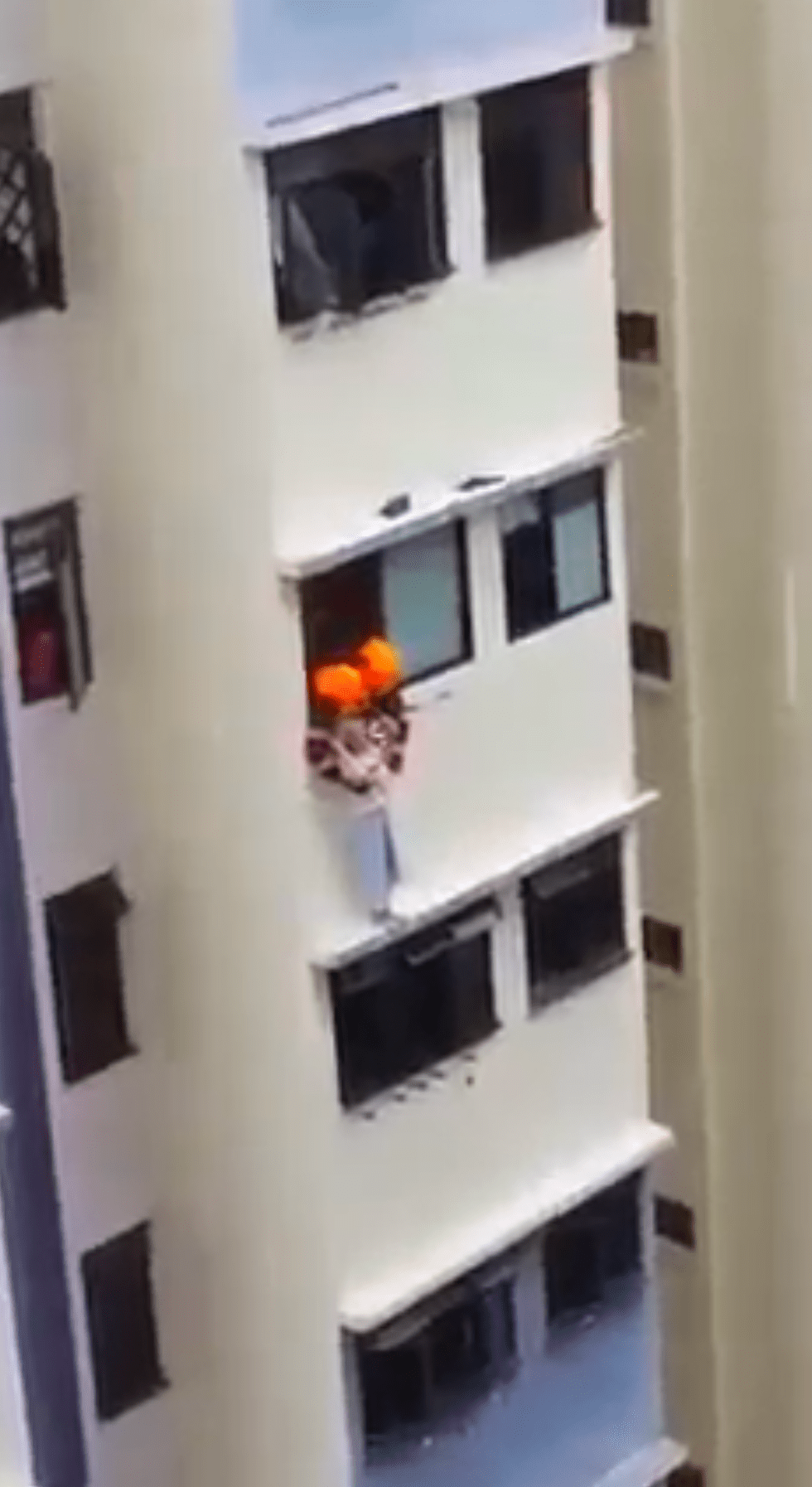 In a TikTok video, we can see an inflatable air pack positioned at the foot of the HDB block. 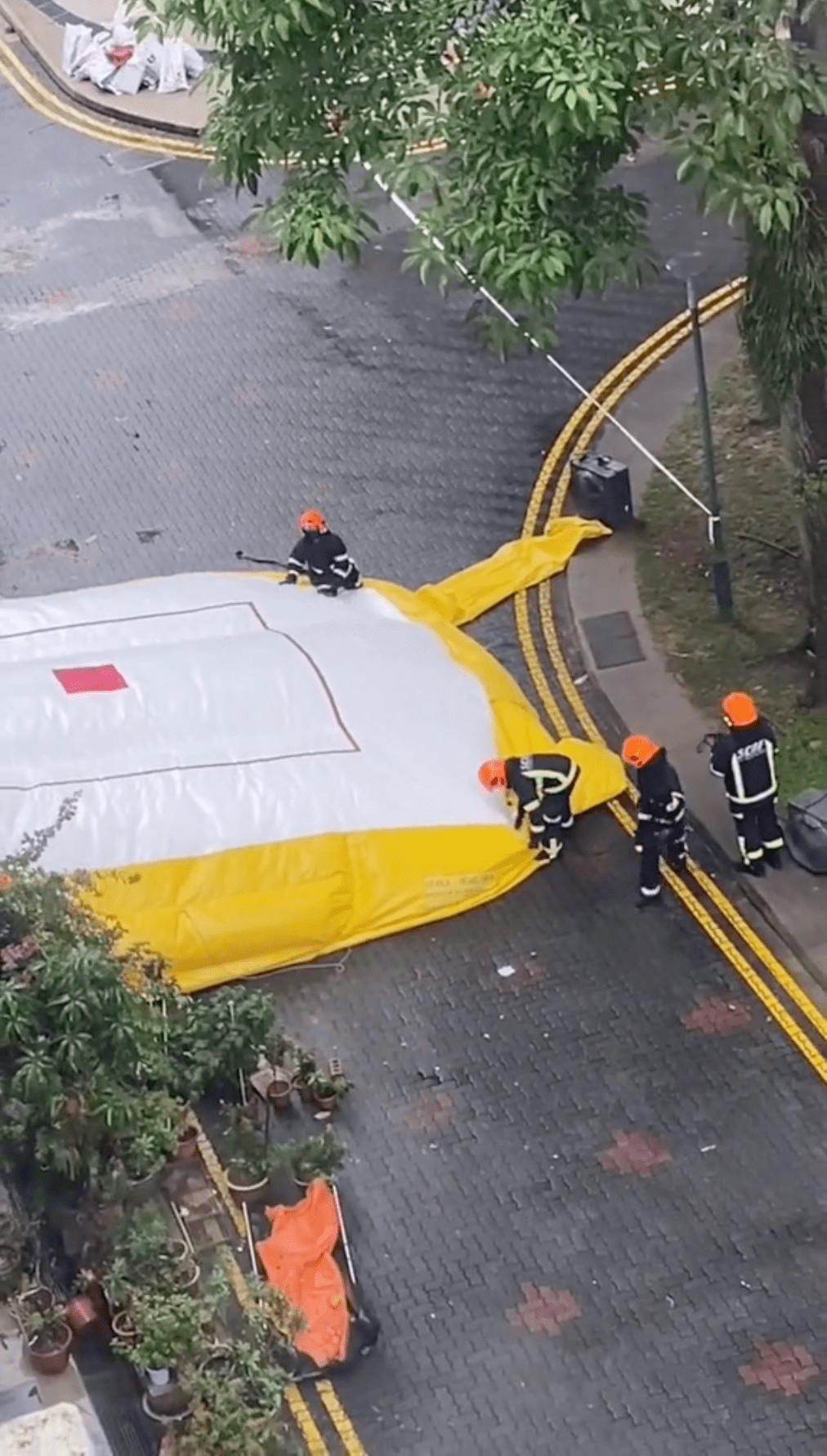 Another SCDF personnel then slowly rappelled down from the window of the unit above.

When he stepped onto the ledge, he held the woman’s legs as the other personnel pulled her into the unit. 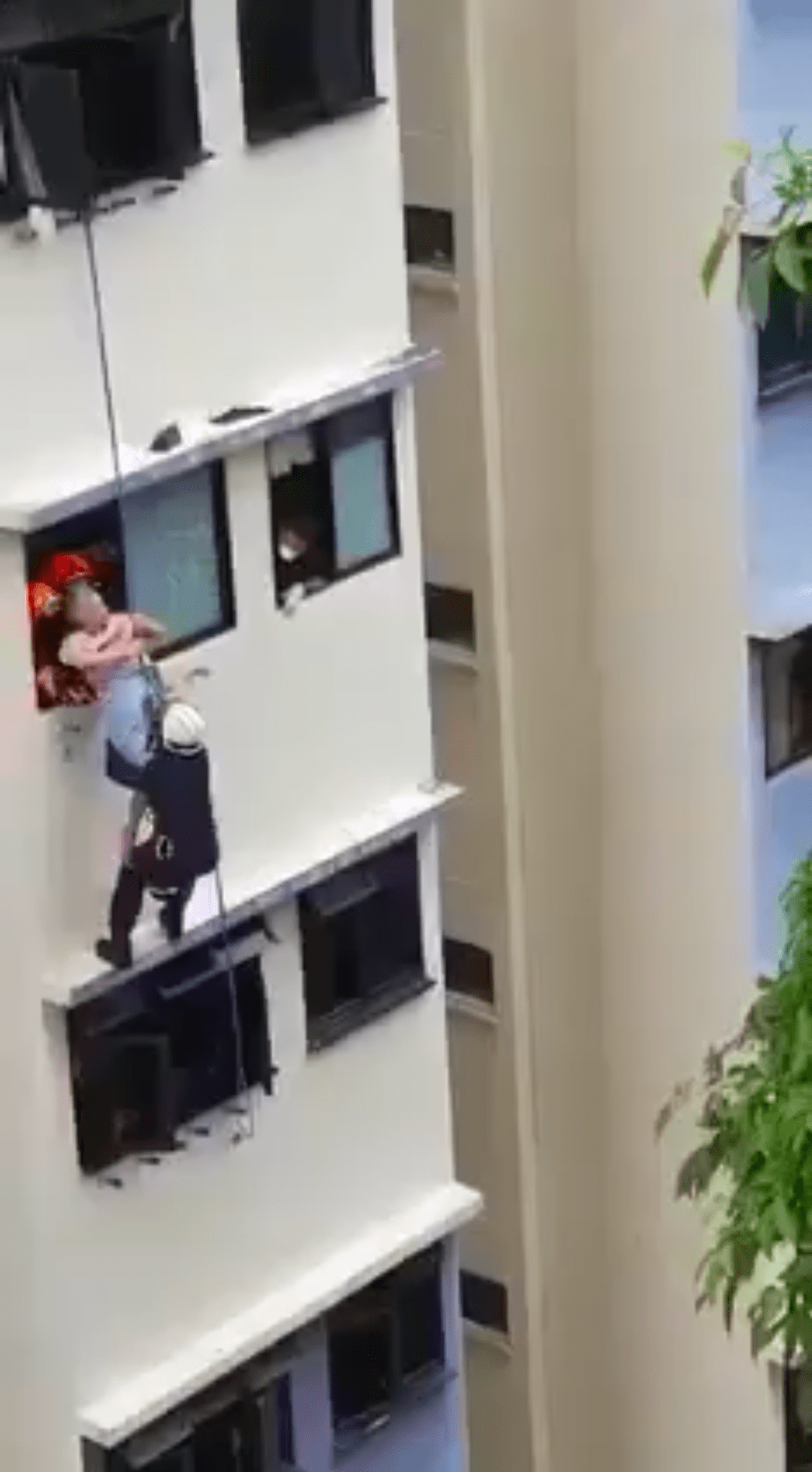 They successfully brought the elderly lady to safety through the window.

Responding to MS News’ queries, SCDF said they received a call for assistance at about 10.35am on 20 Aug.

When they arrived, they set up the safety life pack as a precautionary measure.

SCDF firefighters then held on to her from the window while a DART rescuer was deployed from the unit above to rescue the woman.

The elderly woman was eventually brought in safely through the window, and no injuries were reported.

Kudos to SCDF for the heroic rescue

Standing on a ledge of a tall building is extremely dangerous. A slip of the foot could result in a tragedy.

Kudos to the SCDF for their heroic rescue efforts as they arrived in the nick of time.

We’re glad that there were no injuries reported, and we hope the elderly woman would receive the help she needs.