The true personification of BDE.

With the Hong Kong protest going on, most videos posted online about it are snippets of violent fights in subways or on the streets.

However, a video of this heroic Hong Kong ah ma picking up after the protesters went viral when it was uploaded by South China Morning Post (SCMP). This video garnered 33,000 shares at the time of writing.

Here are some snippets that stood out to us. But if you’d like, you can view the full video here.

According to SCMP, a 70-year-old ah ma was clearing the streets of Wan Chai, Hong Kong at 5pm on 6 Oct.

At the start of the video, this ah ma was seen removing the traffic cones used by protesters to barricade the roads. 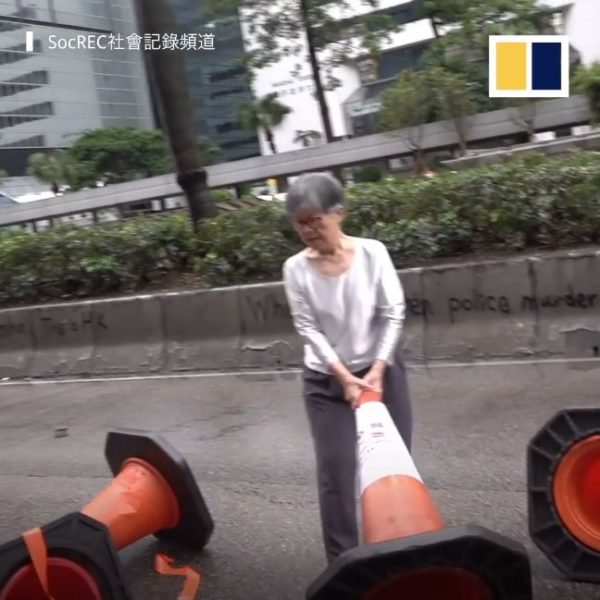 One by one, she pulled the traffic cones to the side of the road, hoping to clear the path for drivers.

While doing so, she lectured protesters and repeatedly asked them “what’s the good” in “blocking people from getting about”. 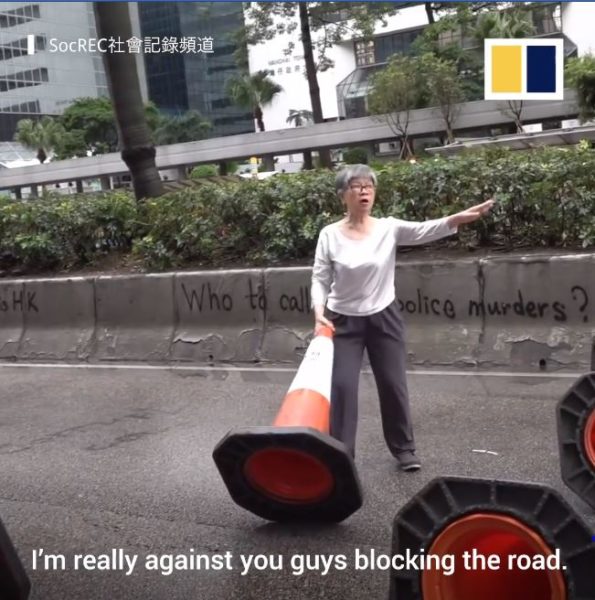 She can’t make a difference by herself

Later on in the video, the ah ma declared that even though she know that her efforts alone will not make a difference, she will still continue doing this.

Her exact words were “I know I can’t beat them. I move one, you throw 10. I know I can’t make a difference but I’m still going to do it”. 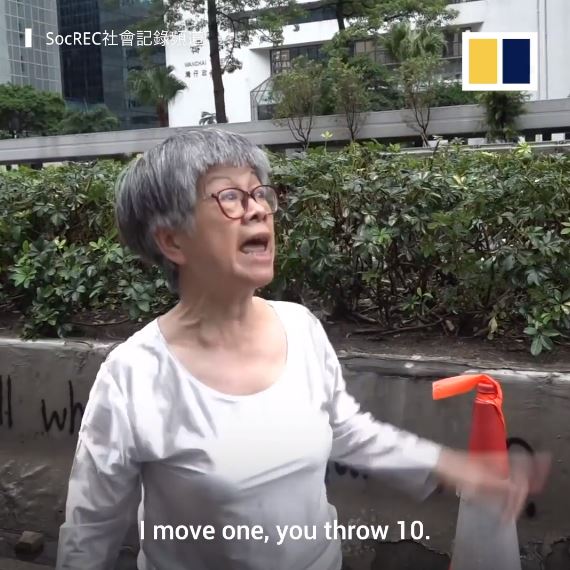 The video even showed her words becoming prophecy, with protesters placing the barricades back on to the roads. But the persistent ah ma went ahead and moved them away again. 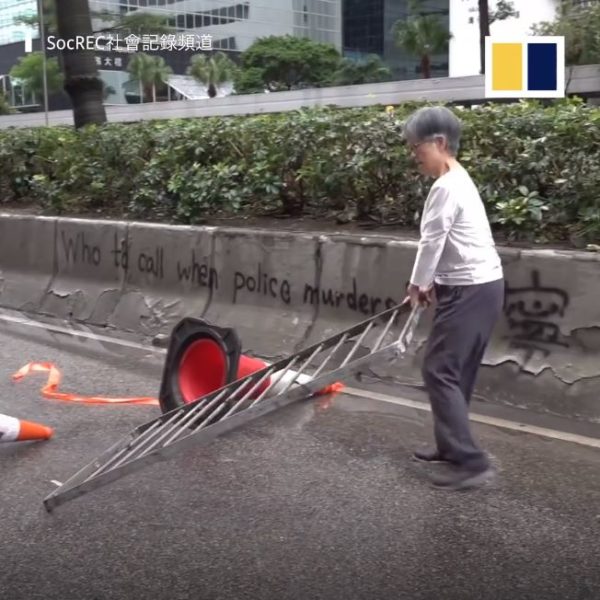 Here’s her explanation as to why she wanted to clear the road.

Bus driver was blocked from crossing the road

While lecturing the protesters, this ah ma shared a story about a bus driver who was ready to head home after work but could not because of the barricades.

According to her, the driver has a family and children to go home to for dinner, and the protesters needed to “use (their) heart to consider this”. 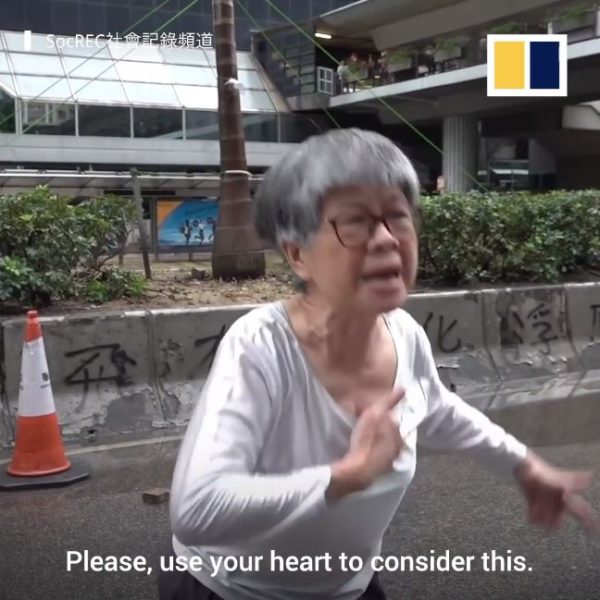 She then added that “Every one has a mother, brothers and sisters”.

“I was moving bricks until my hands were swollen”

This is not the first time this ah ma had acted like this, according to her conversation with the reporter.

She mentioned that once, she moved bricks until her hands were “swollen” and had to visit a doctor at an emergency room because of that. 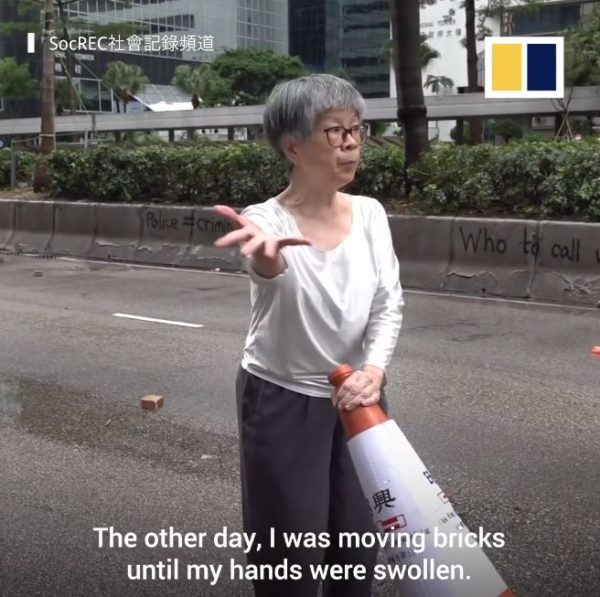 She ended her speech saying that she already did her part as an elder citizen in trying to talk sense into the protesters, adding that ultimately it’s their choice whether to listen. 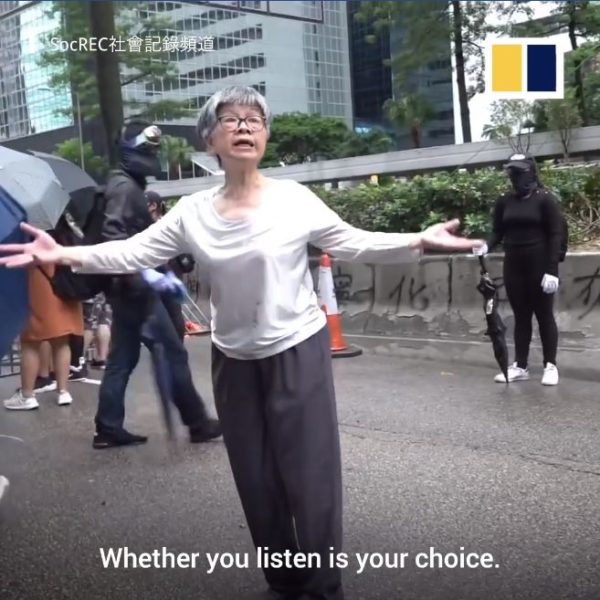 Her persistence is admirable

After the video was uploaded, comments flowed in, with most of them talking about how admirable this ah ma was.

A netizen added that all the ah ma wanted was to live her life in a “friendly family respectful way”.

Amidst the violent and non-violent protests happening, it’s heartwarming to know that there are people out there trying to restore peace on the streets — even if it means risking their own safety.

MS News too, admire this ah ma for her bravery to stand against the protesters alone.

What are your views about this? Let us know in the comments below.