Man Nearly Drowns At Sentosa After Getting Sucked Into Rip Current, Lives To Tell The Tale 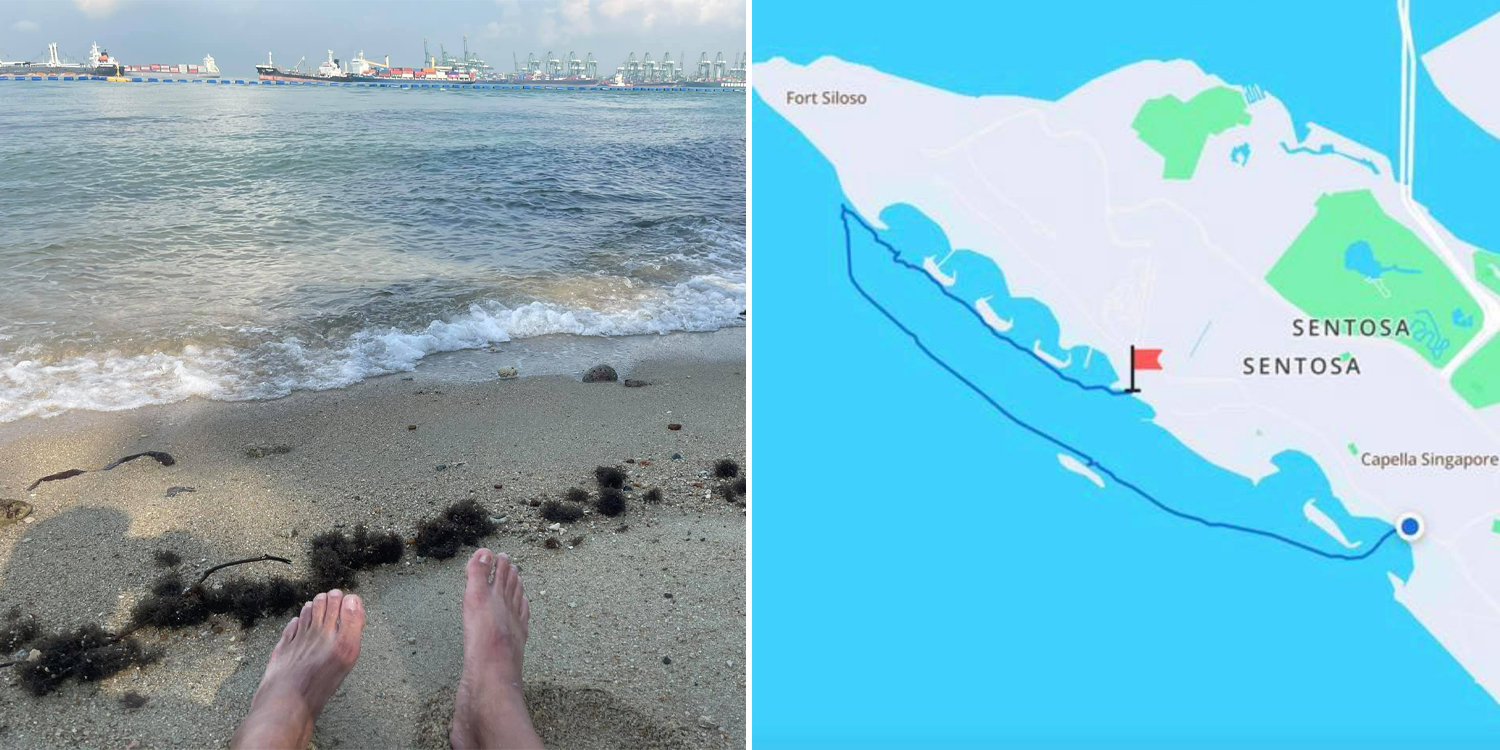 Man Swimming At Sentosa Gets Sucked By A Rip Current, Tells Public To Watch Out

Sentosa is the go-to beach for many Singaporeans looking to have some fun in the sun.

But for one man, his swim at Sentosa turned into a nightmarish experience when he almost drowned after getting sucked by an undercurrent.

He later took to Facebook to recount the near-death experience. 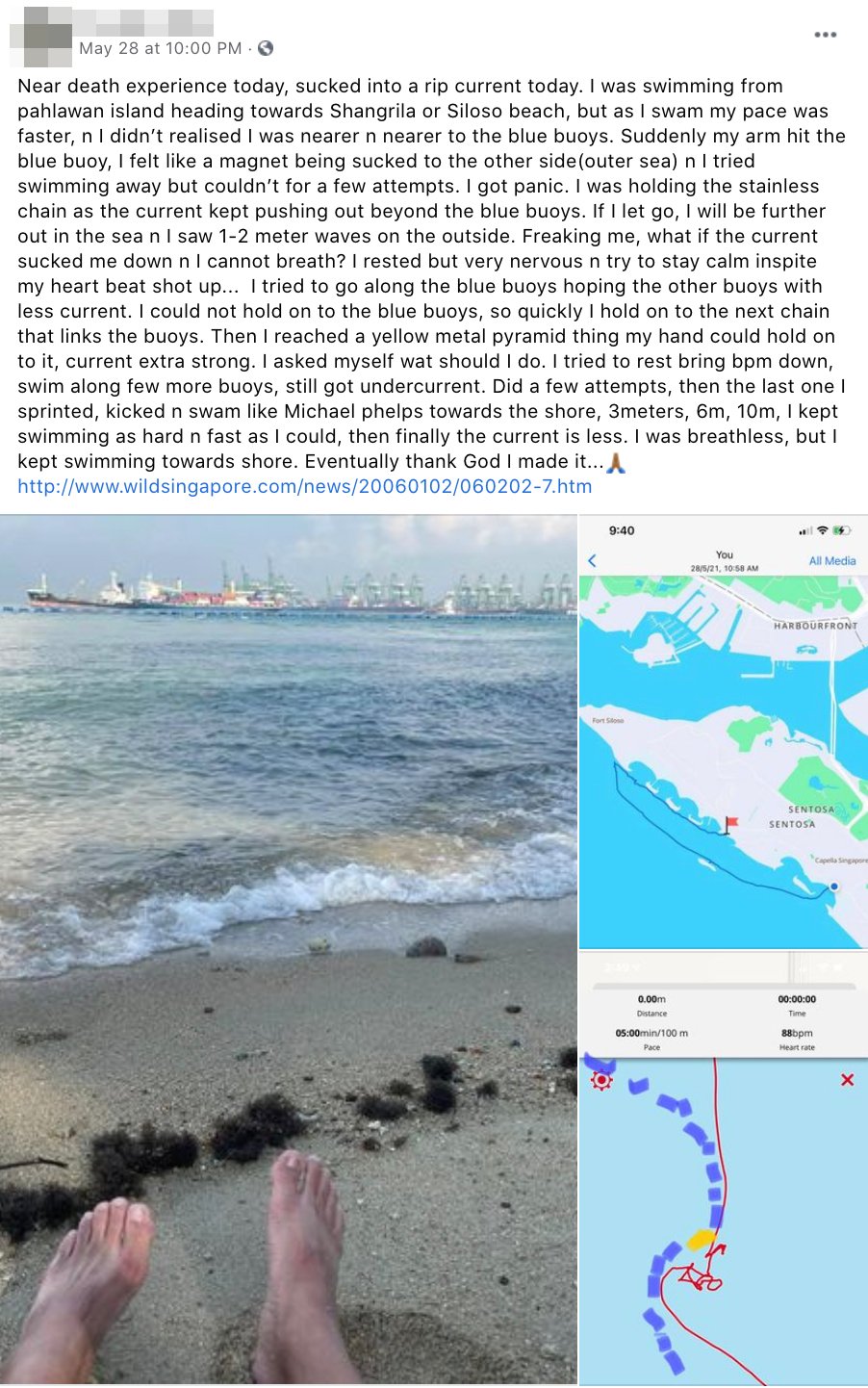 Sentosa urges swimmers to stay within boundaries that are supervised by Beach Patrol Officers.

On 28 May, the man decided to swim from Palawan Beach to Siloso Beach.

As he swam, he unknowingly reached a line of buoyant blue barrels – held together by metal chains – meant to stop illegal entry into Singapore.

According to his Facebook post, his arm hit one of the barrels when he was suddenly sucked towards the sea as if there was a magnetic force.

He tried swimming away but to no avail.

Beginning to panic, he tried his best to hold on to the steel chains as he continued to be pushed out by the currents.

Beyond the blue barrels, the man claims he saw at least 1m-high waves.

Holding onto the metal chains for dear life, the man contemplated his next move.

He then tried to go along the blue barrels using the chains that held them together, hoping the undercurrent will get weaker.

The man claims that even at this point, the current was “extra strong”.

After swimming along a few more barrels, he then attempted to swim towards shore. 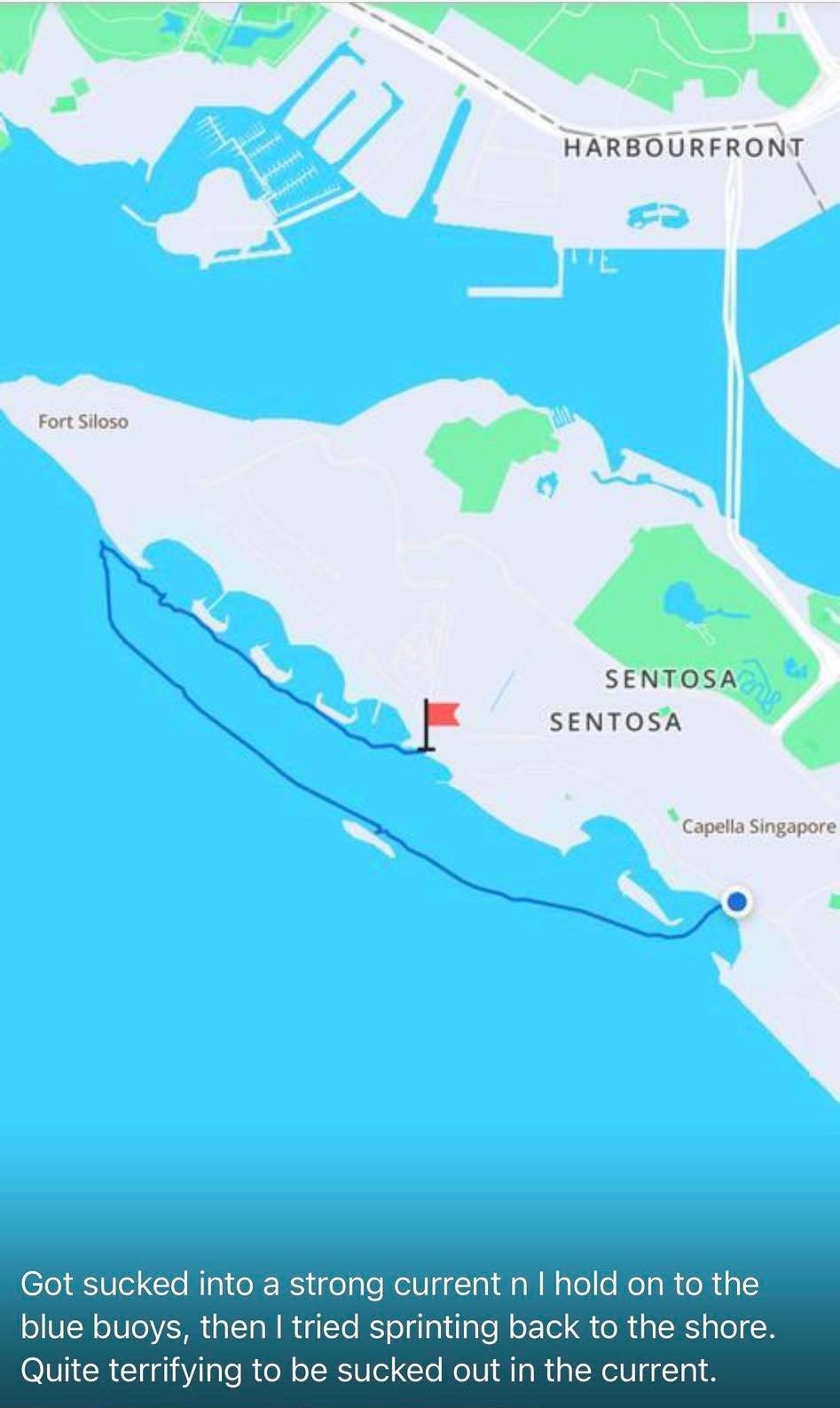 In his final attempt, he “sprinted, kicked, and swam” as hard and fast as he could, finally reaching calmer waters and eventually, the safety of the shore.

Stay within swim areas at Sentosa

Sharing his experience, the man warned the public to watch out for these blue security barriers floating in an S-shape at Sentosa.

That was the point where he got sucked into the undercurrent. 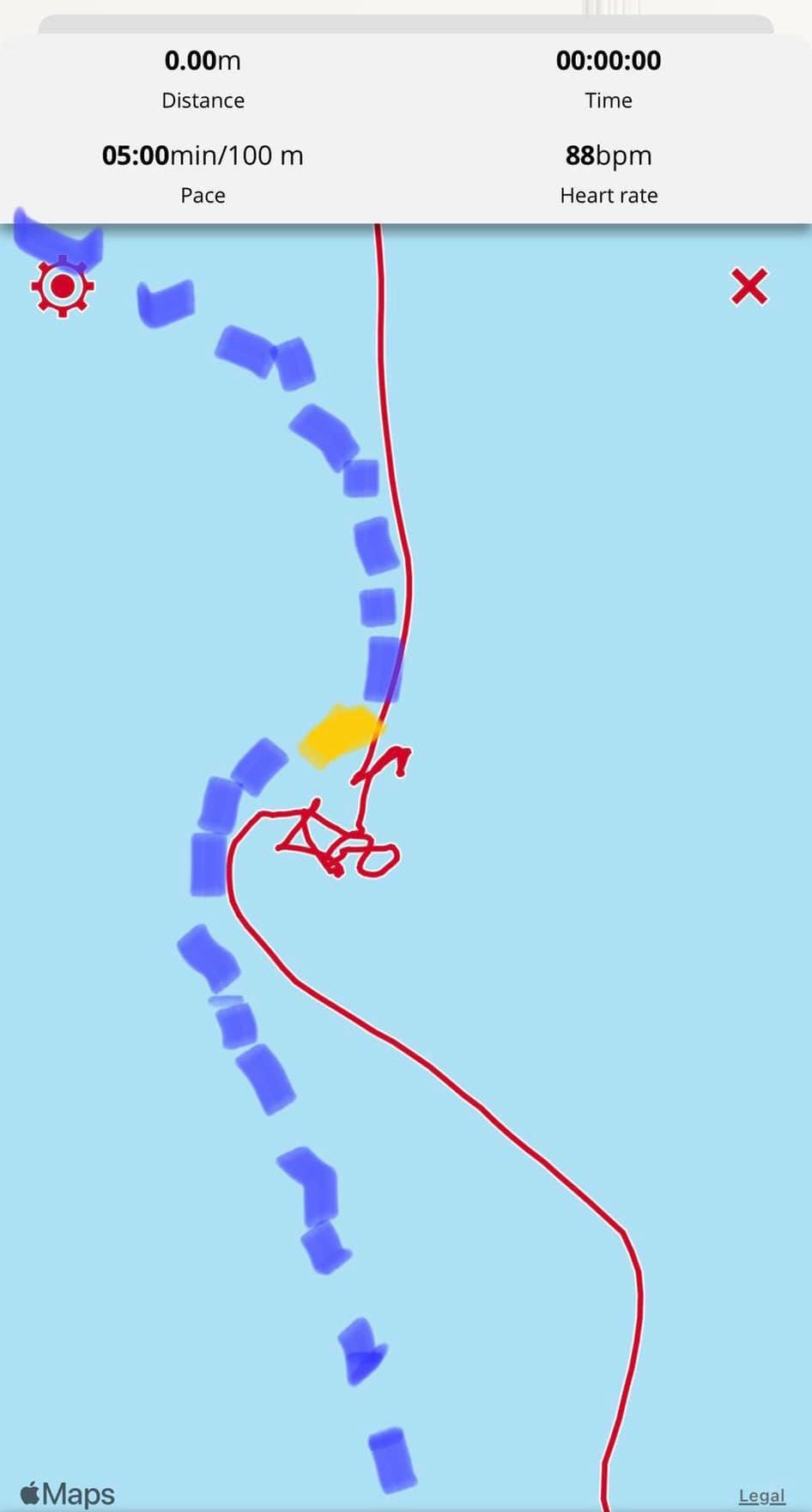 He said the formation also indicates where undercurrents of different directions meet.

According to Sentosa, swimmers should stay between the red and yellow flags that demarcate recommended swim areas. 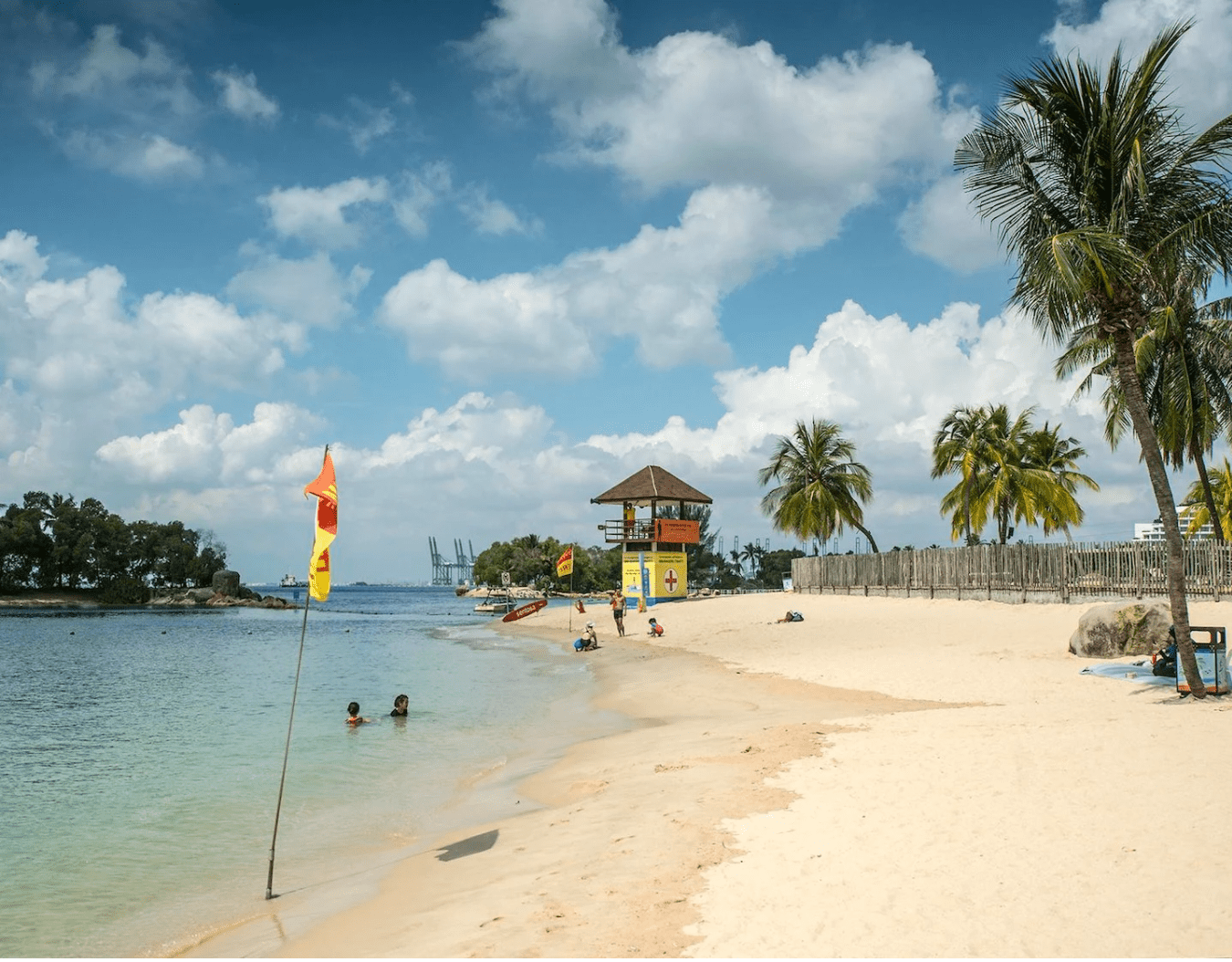 These are areas closely supervised by Beach Patrol Officers who are on duty from 9am-7pm daily.

Red flags are also used to show where dangers are present, and beachgoers should not enter the water.

Surviving a near-death experience must have been terrifying.

At the end of the day, we are glad the man managed to escape unscathed from it.

So the next time you go for a swim at a beach, do it safely and always keep a lookout for safety flags.