S’pore Man Guides Pangolin Away From Road Into Bushes, Gets Praised For Protecting It Some said the pangolin could walk on a fashion runway.

The sunda pangolin is an endangered wildlife species found around Southeast Asia, including on our sunny island.

While they hang out mostly at nature reserves and our surrounding islands like Pulau Tekong, sometimes they can wander on the road and be put in danger.

One netizen sighted one of these pangolins having a night walk, and he slowly guided it back into the forested area, away from the road. 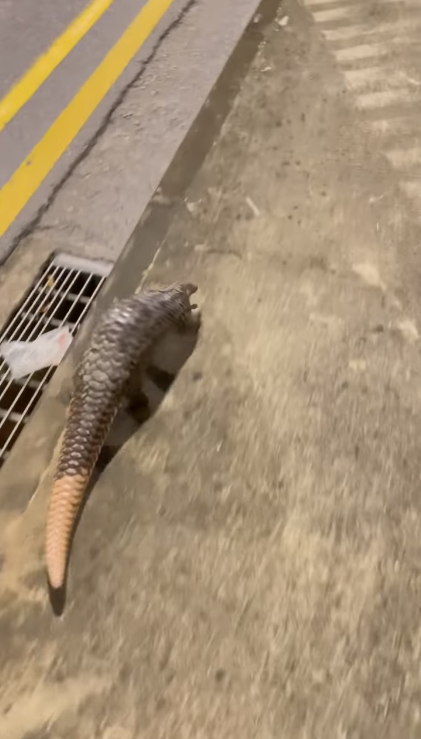 Other netizens were in praise for the man’s actions and also awed at the cute sight.

Netizen guides pangolin away from road into forested area

The netizen had shared the video to Facebook group Singapore Wildlife Sightings on Friday (20 Aug).

In the 20-second clip, the pangolin with a differently-coloured tail from the rest of its scales can be seen strolling close to the road on the pavement.

Who knows where it was going. But there was a possibility of the pangolin wandering onto the road.

The netizen spotted this and decided to walk on the road, to coax the pangolin away from the potentially dangerous situation.

Some more coaxing was required, so the netizen walked the pangolin towards the greenery, which was a success as it scampered back into the forest.

Other netizens wowed by pangolin appearance

Given how sunda pangolins are massively hunted in other countries, many commented that the netizen was lucky to have encountered one.

Others who saw the video gushed at how cute the pangolin was.

Some also thanked the netizen for moving the pangolin away from the road.

The tagging is so that WRS can monitor the pangolins to help their survival and to understand how pangolins choose where to live.

The netizen may or may not have spotted one of these pangolins, actually.

Kudos to netizen for protecting wildlife

With stories about how pangolins have become roadkill, it’s a good thing that people are helping to protect them while out on their walks as well.

Kudos to the netizen for not only taking a video but also guiding the pangolin away from danger.